2017 Update: I’ve visited the mighty Rhode Island highpoint 3 times now: In 2002 with Hoang, in 2011 with Hoang and Damian, and in 2017 with Calvin. It is that important. If you know anything about the history of this highpoint, you know that our first visit was very different than my last two. 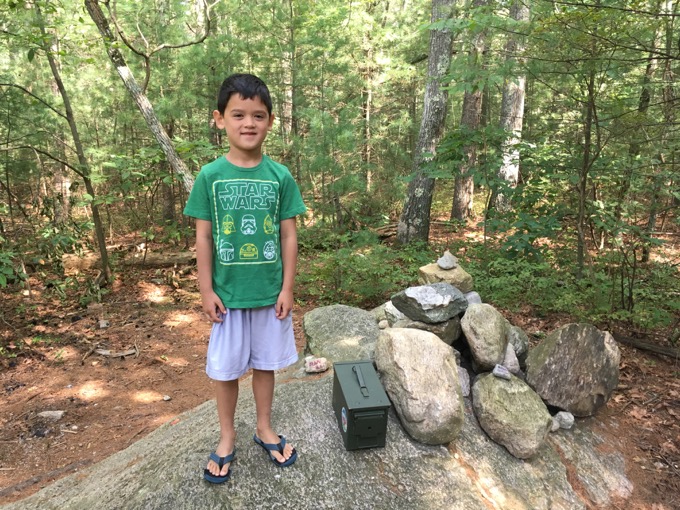 Calvin atop Rhode Island in 2017

The highpoint experience has completely changed in 15 years. But as you can see, it can still be attained in flip-flops.

This is very earliest written page on all of CTMQ! Written way back in February 2002 – long before I began CTMQ. It was written for my own personal (hardcopy) highpointing journal back then and the one picture of us is actual processed film, if you can believe that. 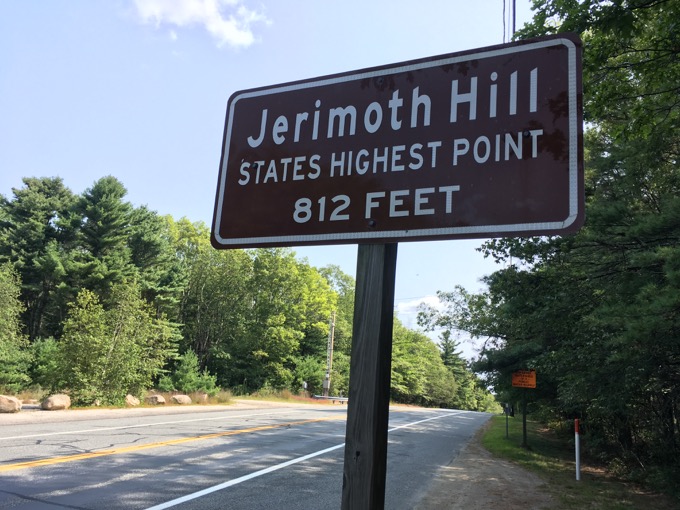 Although I personally have a few state highpoints under my belt, I’ve decided to begin anew with Hoang, my fiancee [Update: now wife]. The tough part was convincing her that this would be a worthwhile and interesting endeavor. I’m not quite sure our first joint highpoint will go down as our greatest, but we had fun nonetheless.

Well, I did anyway.

Rhode Island’s true highpoint, on Jerimoth Hill in the northwestern corner of the tiny state, is actually very difficult to access. It is located on private property (Brown University) 300 yards or so down someone’s driveway (also private). It is only legally accessible a few times per year and being the law-abiding citizens we are, we chose to visit on one of the legally open access dates.

Note, at the time of this writing I was not fully cognizant of the degree to which the landowner guards access to the highpoint. Shots have been fired in the past. 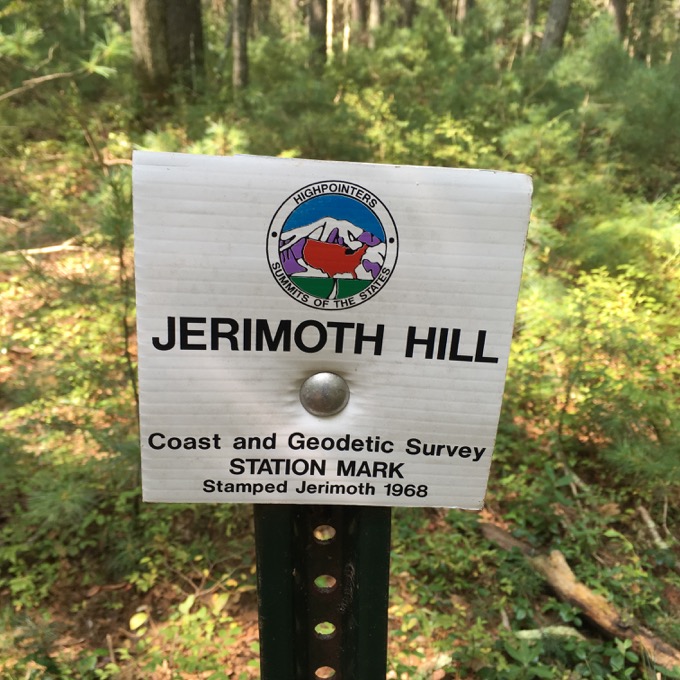 Instead of just driving the hour or so to our destination, we decided to visit some friends whom we never get to see; Ted and Beth R. and their 11-month old daughter in Salem. We left New Britain, CT in a light drizzle but once we got to Colchester along Route 2, it began to snow. I have lived in Connecticut for 10 years now, but I have only rarely ventured to northeastern CT.

After our short visit in Salem, we traveled back roads through Bozrah and then up I-395 to Killingly, CT. I never knew there were so many parts of towns in northeastern CT which I had never heard of… Center Village, Occum, Moosup, etc. Plainfield holds a special place in Hoang’s heart, as it’s the place where some creepy dude in a pickup stalked her into the woods and scared the living crap out of her back in her days as a photographer for a historian. As part of that job, she was often sent to dead end backwoods roads in far-flung towns to snap a few shots of crumbling bridge foundations in the middle of nowhere. Thankfully, she lived and it wasn’t her last assignment. 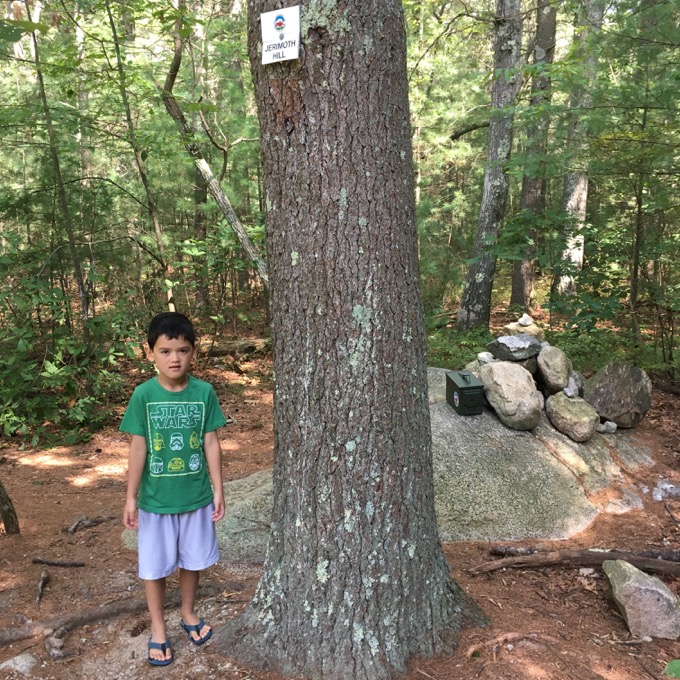 No idea why Calvin looks cold in August 2017.

Anyway, our excitement built as we exited the highway and traveled east along route 101 through East Killingly, CT. Man, this part of Connecticut is not the part of Connecticut people view through the prism of Vanity Fair or whatever. Interestingly, there was no traffic at all… perhaps because the Daytona 500 was on television.

The road did have a couple of decent hills, and of course, Jerimoth Hill is the biggest. Traveling east, about a mile across the Rhode Island border, we neared our goal. There is was no sign signifying the highpoint, but one can just feel that one is on top of Rhode Island while driving. A quick glance in my rear-view mirror and I saw the sign on the other side of the road noting the behemoth that is… Jerimoth Hill.

We U-turned and pulled onto the shoulder behind an inhabited pickup truck, donned our jackets, and looked around. “Ummmm, I don’t know which side of the road the actual highpoint is on,” I muttered. Sensing our bewilderment, Chuck Bickes of the national Highpointers Club stepped out of his truck and came to our aid.

“Hi, are you here to see the highpoint of Rhode Island too?” posed Hoang (seriously, she did), as though that was a typical and totally normal query along a moderately busy road on top of a bump in northwestern RI on a cold and dreary afternoon. It turned out that he was. Not only that, he was there to guide us and regale us with stories from his 46 other US highpoints!

I felt pretty lame when he asked us how many we had done (I spoke the truth though, as this was our first together) but he was cool about it. Amazingly, earlier in the day, 40 other people had come out to do exactly what we were doing, despite the crappy weather. After a 4-minute walk down a completely level dirt driveway through a stand of conifers, and with no fanfare or exertion, we came upon a small clearing with some ugly nondescript metal things and Chuck exclaimed, “Here it is!” 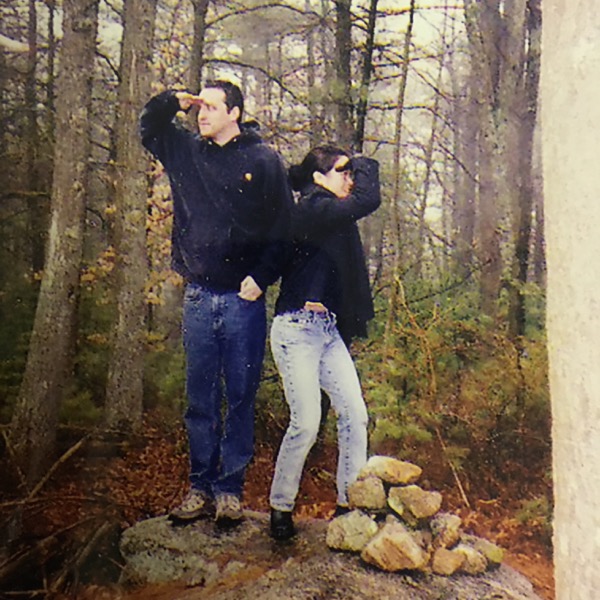 Wow. A two-foot mound with a cairn placed on top serves as the official highpoint of Rhode Island. It was cold and it was raining, but Chuck was more than happy to snap a picture of us up on that rock. It was cold and it was still raining, but Chuck was even happier to talk about his adventures on Mt. Hood, Denali, Boundary Peak, Mt. Rainier, and others

Chuck was really cool and had some great stories (International highpoints as well!) but c’mon… the rain had turned to snow and Hoang just wanted to go.

We said thanks and goodbye and began the “scenic” trip back along some less traveled roads. Bad move. No one told me that it would be seriously snowing in the lovely towns of Pomfret, Ashland, and Eastford. Route 44 in northeastern CT is not a place you want to be driving in a hard snowstorm, as the drivers of the 2 crashed cars we passed could attest

By the time we got through Hartford on our way back to New Britain, the sun was shining. Since this made our adventure seem like a load of mularkey, we kept our mouths shut about it to Hoang’s roommate, made some dinner, and watched TV. 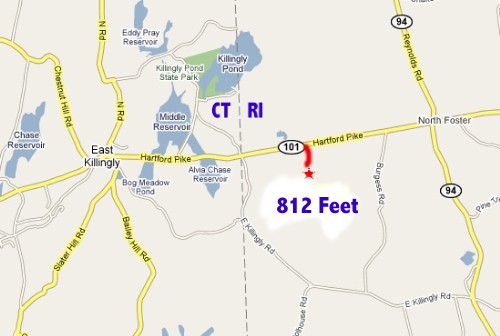 My oh my. It’s amazing how much a highpoint can change in 10 years. Okay, the highpoint itself didn’t change (although that has happened in the past 100 years due to surveying errors and such – even here in our great state of Connecticut), but the whole experience has changed. 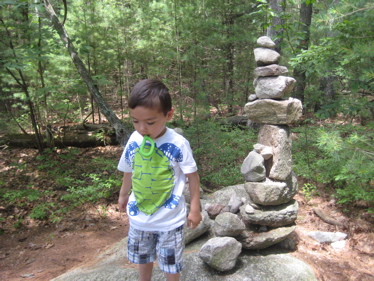 It’s also amazing how much time, energy and press has been devoted to the 812-foot inconsequential summit of Jerimoth Hill in northwestern Rhode Island.

Quickly, back then the 3 minute “hike” to the highpoint was on private property and guarded with anger and a gun. Access was only open a few days per year and despite the completely flat and short hike, it was deemed the “toughest highpoint in America.” 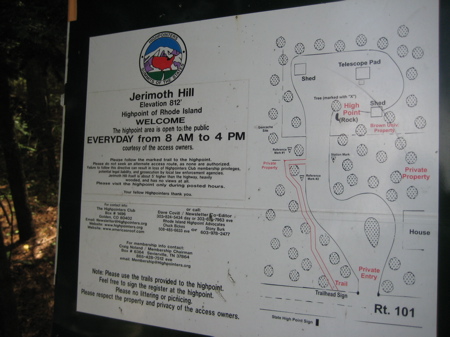 Not anymore. A highpointer-friendly couple bought the house next to it and now they allow access during business hours 365 days per year. A fresh trail was cleared, trees were marked, a more impressive summit cairn was built and voila! A whole new highpointing experience!

Damian and I left a giant in-law family vacation on Cape Cod a few days early (due to work commitments on my part) and veered off of Route 6 to follow 101 out to the highpoint. I found it like a homing pigeon coming home to roost – as this was my very first highpoint with Hoang. Back then it was around 30 degrees and snowing. This time it was over 90 degrees and humid. 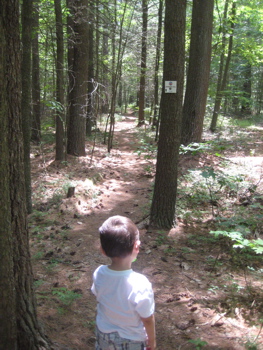 We found the new trail and Damian and I walked along the path through the pines. Before we knew it, we were atop the Ocean State. Woo-hoo!

Damian was solidly unimpressed, but who can blame him. The poor boy has only been to the top of Delaware and I guess you could count Florida in utero.

Hmm, I just realized our Florida highpoint was also during another giant in-law family vacation. Anyway, Damian has been to three of the lowliest highpoints in all the land. (And now I’ve been to two of them twice!) 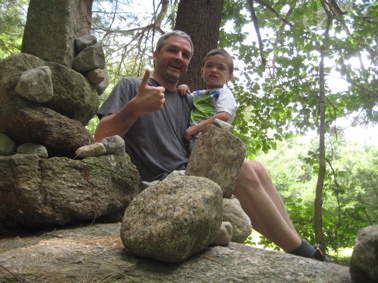 Another family vacation to the Cape, another detour off of route 6 on our way home, another walk out to the top of Rhode Island!

I felt the need to bring Calvin to his second highpoint of his life for some reason. (Delaware being his first.) He wasn’t too keen on the idea, as he just wanted to get home. 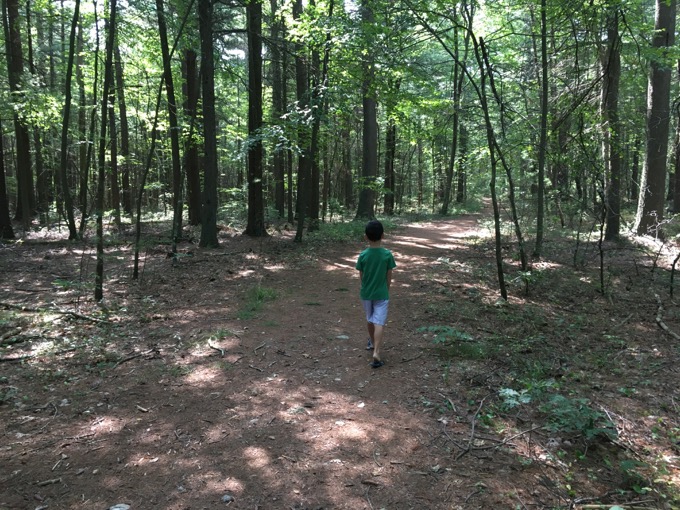 Pshaw! This is highpointing, son! And you can do it in your flip-flops for goodness sake! Put down your iPad and let’s go!

We left Hoang and Damian in the car – there’s now a nice turnout for highpointer parking – and hit the trail. It is still open all day every day, still well marked, and still flat as a pancake. 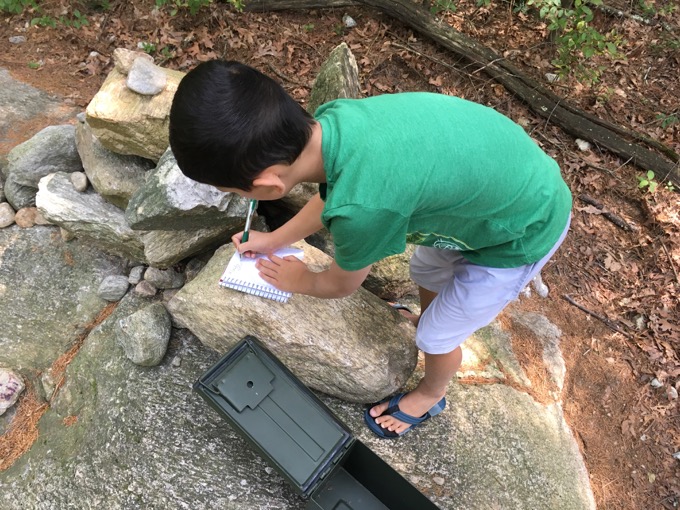 After a few minutes, Calvin was in the groove and seemed to sort of enjoy the idea of being on the highest point of a state. He’s still a little confuse about the US being made up of 50 states, as he asked when we’d be back in “America.” (“America” apparently being just Connecticut in his view.)

There’s a nice register box now, which Calvin signed, “Calvin.” Nothing else, just “Calvin.” I like his succinctness.

They also seem to have found a USGS benchmark near the cairn as well. I don’t recall that from visits past. 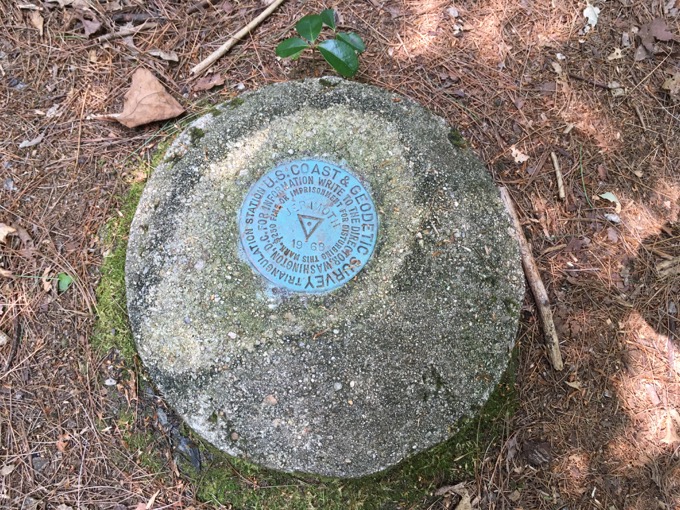 After summitting, we ran back to the car and drove the rest of the way home to West Hartford.