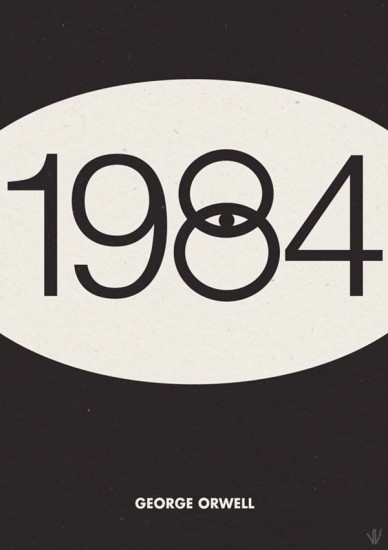 Since you’ve all read 1984, I don’t really see much of a point discussing the book. Okay, okay, I will in a minute. But I have a story of my own to tell you first.

In 1984 I turned 12. In 1985 I entered 7th grade. My English teacher was Mrs. Cundiff and she was a pretty good English teacher. She assigned 1984 at some point and I did what I became very good at doing, all the way through college: Not reading the assigned books but understanding them well enough to write decent essays on them.

I’ve written before that this whole “Top 100 Modern Library Books Reading Challenge” is very most likely my personal attempt to overcome the guilt of scamming my English teachers from 4th grade through college. Kids, if you’re reading this looking to cheat yourself out of an education, I shouldn’t tell you that I never got less than an ‘A’ in an English class… But I don’t think I ever did.

Then again, ask yourself if you can write a website for 10 years and make every hike you hike and every beer you drink and every museum you visit at least mildly interesting to someone who will never experience those things. If that answer is “no,” and I assure you it probably is, go and read the damn book. It’s not long, and there are sexy parts. Julia is hot. I’m telling you, don’t follow my path.

Anyway, back to Mrs. Cundiff. For our 1984 study, she developed this elaborate thing wherein she took on the role of “Big Mother.” She laid it all out there – she had recruited her own “thought police” amongst my classmates and she would be receiving regular reports from them. We were not to ever disparage Big Mother in any way, or it would hurt our grade. If we had a problem with this situation, tough, we had to live with it. For if we didn’t, we would suffer mightily.

So we were to read the book, never complain about our assignments and again, never, ever say anything negative at all about the assignments or Big Mother. Her “agents” were sworn to secrecy (or suffer some sort of terrible punishment) and if we tried to sniff them out, that again would get back to Big Mother and we’d be doomed.

So we all read the book. I distinctly recall being rather excited by Winston’s dalliances with Julia and the rather tame descriptions of her breasts and their affair. But at some point, the book lost steam for me and I gave up on it. I had skateboarding to do.

And frankly the whole thing made me mad. I spent a day talking to the smartest girl in the class. She was terrified by Big Mother and the whole “experiment.” I appealed to her logic though, simply explaining that there was just no way in the world she could base grades – our collegiate futures! on secret police and gossip.

I broke through to her. (Maybe this is why she deigned to become my girlfriend from 10th grade until sophomore year of college or so. Haha.)

So I challenged Big Mother. Straight up. During class when she donned her dickie or whatever she wore to symbolize her fake power, and gave her report… “I have received word that three of you have dared to speak ill of Big Mother. I have received another report from my faithful agents that another 4 of you have complained about 1984. You know who you are, and you will be dealt with as promised.” Or some such claptrap.

I called her out. I basically said that there are no secret agents, that she simply cannot do what she claims to be doing and this whole cruel experiment was entirely fictional. The class gasped. Everyone stared at me. Big Mother sent me out to the hallway. I was resolute – and I knew I was right.

Class ended and she called me back in. She kept up the act and said I was going to be the example of what happens to those who go against Big Mother. I squirmed a little, but I told her that I was sure she can’t do that. That is was all a ruse and I get that, and it really brought 1984 to a different level for us kids, but that it had also created a terrible environment in the cafeteria and at recess where everyone was suspicious of each other and that wasn’t cool and especially since it was all fake.

She stared at me.

She took off her ominous dickie, sighed, and gave it all up. She said no one had ever called her out like this before and then she offered me a deal. I had to shut up about all this and let the thing play out. It was for the good of the lesson plan, she said, and it would end early, in another day or two.

I agreed, but told her that I’d tell MY secret agents, unknown to her, that the jig was up. And that was that.

This was an important formative moment in my young life. Really and truly, it was. Many years later – probably about 15 or so – Mrs. Cundiff randomly became the organist at my grandparent’s church. So I had the occasion to reconnect with her and of course this whole incident came up. She told me several nice things about how I’d handled myself and that she abandoned the whole experiment the next year and blah blah blah.

[I’ve never really told that story before and I – obviously – always wanted to. So there you are. Also, since I assume this page will get 1000’s of pubescent kids looking for help with their book reports in the future, I thought I’d make it as annoying for them as possible.]

And no, I never finished the book back then. But I did now!

1984 is inescapable these days, 65 years after its first publishing. It has become a meme; it is ingrained in every part of our lives. The NSA stuff, Snowden, Putin, North Korea, the Patriot Act… Much of it has become very real, and nearly as scary of Orwell’s fiction.

But one thing I’ve learned from reading the whole book – those scaremongers on the right and the left have never actually read 1984. Because Big Brother and his thought police and the whole system in the book is, literally, a million times worse than anything any of us have ever experienced in the US.

The sheer violence of it. The dehumanizing insanity of the book is so far beyond the NSA reading my email that it’s absurd to equate the two. Sorry wingnuts of both stripes, that’s a fact. 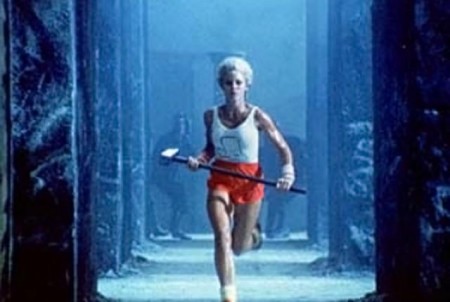 Okay, the book. The government controls every aspect of life and it is a horrible, bleak, ugly future. Winston Smith is employed by the government (as is everyone who is gainfully employed in this future) re-editing news stories. He is tasked with redefining historical facts to meet current fictions. It is a never ending job, of course, as the government “disappears” people and changes history to suit their needs on a constant basis.

Winston meets Julia and they both realize their hormones are stroner than the will of The Party. They have an affair – Winston is technically married to some soulless wench we never really meet – and eke out a bit of humanity in a world devoid of it. They think they meet a leader of “The Brotherhood,” a group with the singular aim of bringing down Big Brother, but it turns out this guy, O’Brien, is merely a Big Brother big wig.

Winston and Julia are picked up, learn that everyone they trusted was not to be trusted, and they are summarily tortured. Tortured to the point where 2+2=5. The Big Brother regime is more thorough than previous totalitarians… They don’t wish to kill citizens as martyrs, nor do they wish to just disappear them. They wish to totally melt their brains to the point where even the most resolute dissident becomes one with the state.

That’s pretty hardcore. So Winston and Julia survive their torturous isolation… but do they really?! Dunh-dunh-dunhhhhhh…

The best part of 1984 is about 2/3 of the way through it when Winston gets his hands on the “real” history of the state and its enemies. The reading of this history goes on to the point where you, the reader, just wants it to end as it’s a bit boring. And just when you’re about to go all seventh grade on the book, aha! Winston and Julia are captured! There was a telescreen in their secret hideaway all the while!

Orwell wrote this book after Animal Farm, which was of course his symbolic exploration of communism, socialism, and “the collective.” I guess he wasn’t satisfied that people “got it,” so he bludgeoned them over the head with 1984.