Since this first visit, we have been to Clyde’s several times. There are some pictures from a 2013 as well.

Since you were wondering, no, I haven’t used this title before. Over at the oldest operational cider mill in the country in Glastonbury I used, ”Damian Sat Down Be-Cider and Drank”. For the Metacomet Trail section through the apple orchards and right past the front door of Rogers Orchards I went with, “Hiking with the Apple of my Eye”. And finally, for my review of the supposed “Best crumb-top apple pie” in Connecticut, I went in a different direction with “A Pretty, Crumby Pie.” 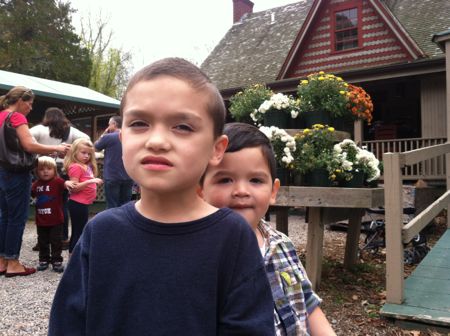 And while those three reports describe some incredible apple-centric attractions in Connecticut, I am comfortable saying that BF Clyde’s is the Granddaddy and the Godfather of them all. It has everything – I love it.

What constitutes “everything?” Autumnal beauty, New Englandy cache, fresh homemade cider doughnuts, fresh homemade apple cider, a bunch of apple wines, a bunch of hard ciders, lots of history, wood smoke. It’s essentially New England bundled up in one little parcel in an out-of-the way northern section of Old Mystic (on the Stonington side of the river.) If you call yourself a true fan of Connecticut, BF Clyde’s must be on your resume. 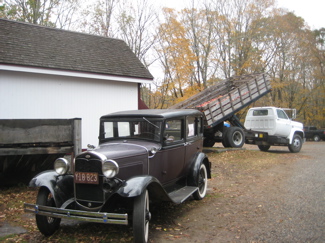 But that doesn’t mean there isn’t still a looming question as to whether BF Clyde’s is a museum. For the record, it’s not. It’s a commercial venture with a long history. But so does Comstock, Ferre & Company and I didn’t consider that a museum. It has demonstrations and historic items all around the joint like Lamothe’s Sugar House and I did consider that one a museum. 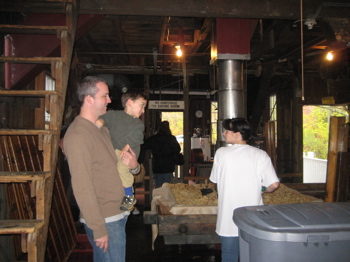 What to do, what to do… Well, I asked Hoang her opinion on the matter and the following is her verbatim emailed response:

“Hmm…that’s a difficult one. I suppose it can be – isn’t that why we went there? – but then again, your Grandmom is old and probably has some old timey photos up in her apartment, and so does that mean you’re going to a museum when you go visit her?” 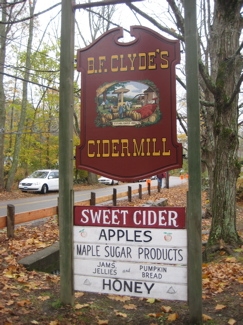 That’s my girl. The one I married. ‘Til death do us part. I (obviously) decided it is a museum for CTMQ purposes, so let’s get on with it.

It’s not the easiest place in the world to find and in fact, (pre-GPS) Google Maps sent us off on a wild goose chase for some reason. It might have something to do with the fact that Old Mystic isn’t an actual town but is an area of TWO towns (Groton and Stonington) and is different from Mystic proper, which isn’t a proper town. 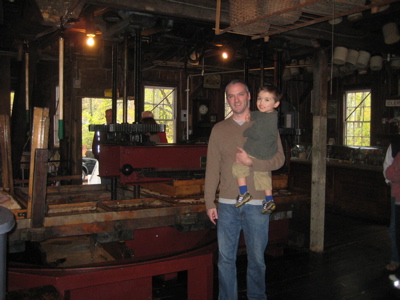 This screw up did allow us to stop for a moment at the Mystic Depot Visitor’s Center which is as lovely and quaint as you’d imagine it to be. It’s so lovely and so quaint, in fact, that it was used by American Flyer as its model for a train depot over 50 years ago. The woman working the desk was very helpful and we were back on track in no time.

Update: It’s no longer a visitor’s center – it’s now a coffee shop in 2020, but is still an Amtrak train station. 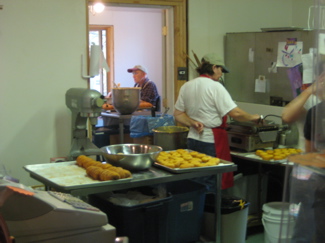 BF Clyde’s is tucked into the woods off of a winding country road and parking is at a premium on these Saturday afternoons. It’s a complete free-for-all and if it’s raining, or has been raining, prepare to get muddy. But that’s half the fun.

There are several buildings on the property, one which I’ll dispense with immediately: There’s some Christmassy gift shop thing that sells all that stuff that we don’t buy at other stores, so why buy it here? (Though, to be fair, it appeared that many of the items were made by local artisans, so perhaps you should buy stuff here. It’s just not my cup of tea. Or cider.) 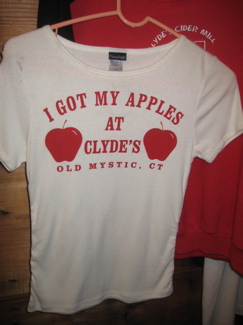 The main front and center building is the main shop/bakery. We skipped over that and headed straight to the old cider press. For really, this is why I’ve categorized this place as a museum.

Which reminds me… I feel the need to clear up some confusing information that is consistent across the Intertubes. While this is an impressive and historically important site, it is not an official National Historic Landmark as it says on many websites, including BF Clydes. I have no doubt that it may be someday. It’s not even on the Register of Historic Places in Connecticut (but again, it absolutely should be.) 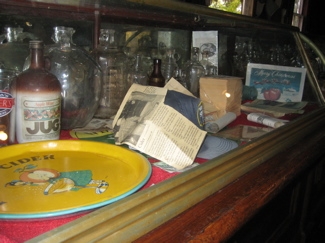 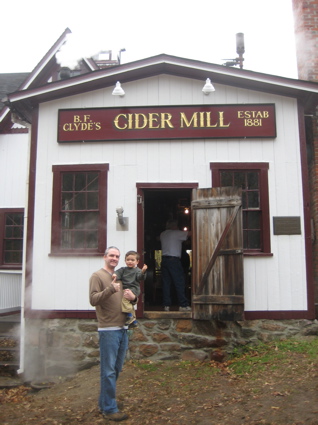 Note: Damian’s CTMQ Thumb and the plaque to the right is the ASME plaque, not an NHL plaque.

So why the confusion? BF Clyde’s Cider Mill is one of the eight Historic Mechanical Engineering Landmarks in the state. This is not a federal program at all – but it’s still cool. Cool enough for me to seek out our important eight spots around the state, starting with this one. You can see the other American Society of Mechanical Engineers designated landmarks in Connecticut here. 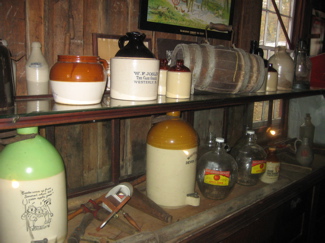 Their own website claims the NHL status and then every other site that writes about them says the same. There is, of course, a chance that I’m wrong – because they very well may be an NHL and it’s just not on the official NHL site(s). And speaking of other sites, let’s read what they have to say about themselves:

The apples for our Hard Ciders and Apple Wines come from local orchards and are pressed into juice here at our Mill. The juice is then pumped directly into oak casks in the Mill’s cellar, where it is fermented and aged for one year. Our Ciders and Apple Wines are still, in keeping with the tradition of cider makers of long ago.

Tradition is very important to us here at Clyde’s. In 1898, Frank and Abby Clyde built the Victorian style building and purchased the machinery still in use today.

We are the last steam powered cider mill in the U.S. today. In 1994, Clyde’s was designated a National Historic Landmark.

Gosh darnit, I thought we cleared that up already.

It’s not only the last remaining steam-powered cider mill in existence, B.F. Clyde’s is the oldest continuous producer of hard cider in America, too! Yeah, that’s right – and that’s where we were headed next.

The old cider press room is definitely cool. I can’t imagine how many apples have come through this room. There are a lot of old cider bottles and cider-making artifacts around the barn. In fact, with the uniquely old press running and the artifacts, it’s hard to argue that this is not a museum. Sure, the old bottles and signs and stuff are cool, but it’s the press that should get all the, ahem, press. Using all steel construction, it is considered by some to be the finest screw cider press ever made. The cider mill at B.F. Clyde’s also represents one of the last screw presses. In the 20th century, the hydraulic press came into widespread use. 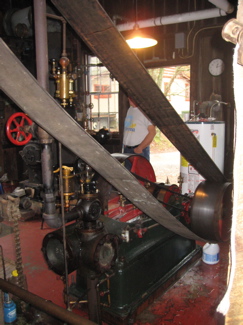 A crowd of us watched the workers press apples silently and reverently. I don’t know why, but no one asked any questions (it was pretty loud) and we all sort of stood there just watching… mesmerized. Apples go in, juice comes out. What they do with the juice next is up to them…

The hard cider room is underneath the press room. One must go outside and down a little embankment to the door to the tasting area. I suppose you could stand there and sample all the flavors, but since it’s one at a time and there is almost always a line, you’d be kind of a jerk to do so. (Not that the guy in front of me cared about that.) Clyde’s offers around seven varieties of hard cider all of which are simply explained on the tattered wooden sign propped up against the centuries old cellar stone wall. Boy, did I ever want to put an apostrophe on that sign… 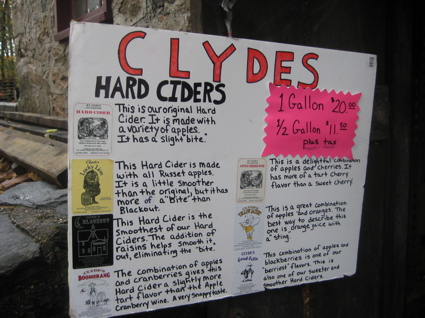 Just writing about this place now has my mouth watering. Yes, even though I thought I wouldn’t really like this stuff, it turns out that I really do. I’d only had the mass-marketed sweet hard ciders in the past. This stuff was phenomenal. I tried the Blackout (28 proof!) and was amazed at the smoothness. I settled on the Apple/Cherry Wine (which wasn’t actually wine) which was tart with a wonderful cherry flavor. REAL cherry flavor, not like cough drop cherry flavoring. Sure it’s a bit pricey at 20 bucks for a gallon of the stuff, but where else are you going to get this kind of thing? 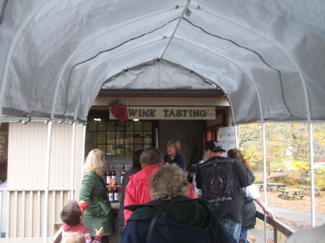 Since it was drizzling, Hoang and Damian left me and went to the main store area to hang out. I found them enjoying some hot (non-alcoholic) apple cider and some freshly made cider donuts. Well, at least Damian was eating the donuts – devouring two of them in record time. Since they were both content, I ventured to the back of the main store to the wine tasting area. 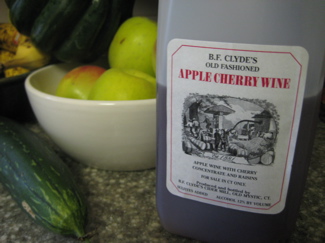 Yup, these guys make a bunch of hard ciders AND a bunch of apple wines. I don’t have a list of their wines, but their extensive selection sort of followed the same path of the hard ciders, just with more fermentation and higher alcohol and no carbonation. They didn’t really knock my socks off, but they weren’t too bad either. I should note that both tastings were free. 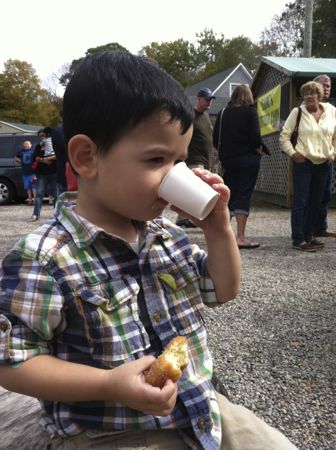 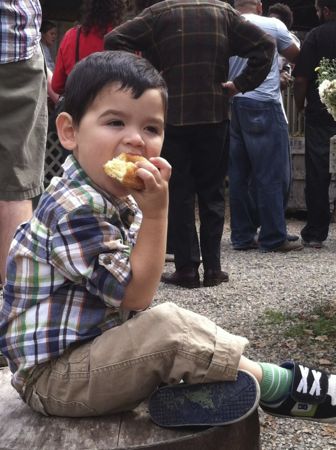 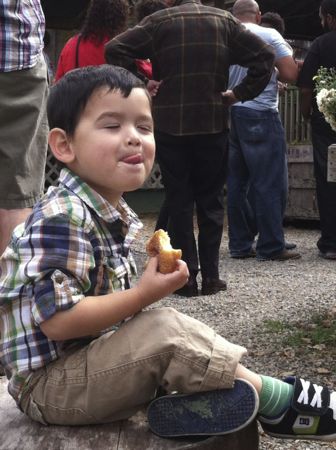 Back inside the large store – the shop is stocked with not only the Cider Mill’s own products–cider, hard cider, apple wines, jams, jellies, apple pies, candy apples and Johnny Cake Meal ground on the premises in a grist mill that dates to about 1920, but with other local and regional products and produce–honey, maple syrup, fudge, pumpkins, gourds, Indian corn, cheeses, mustards and more. But really, what more do you need on a raw fall day than some warm donuts, warm apple cider, and a cooler full of hard cider for later that night? 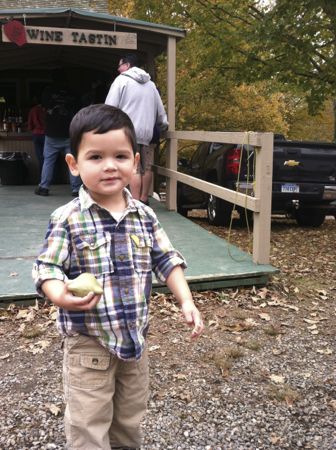 After Clyde’s, we drove across town to two vineyards in Stonington and North Stonington to complete our excellent day. I couldn’t imagine a better way to spend a drizzly October weekend than Clyde’s, Stonington Vineyards and Jonathan Edwards Winery.