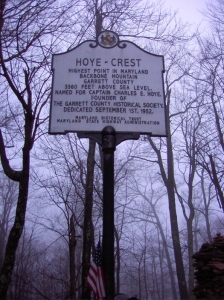 My wife, having grown up in Hard Hittin’ New Britain, Connecticut, had never really heard shotgun or rifle blasts echoing through the woods before. Only the distinct “pop-pop-pop” of semi-automatic drive-by drug wars. In hindsight, I probably could have gotten away with lying to her, saying it was some mining operation down the road I had read about. Since the shots were fairly frequent, I figured it must have been a shooting range, so I wasn’t too worried. But then it hit me… We were in extreme northeastern West Virginia, hiking into extreme western Maryland. This wasn’t exactly the most patrolled area in the country and it’s not exactly known for its Rhodes Scholars. So we joined the ranks of the less intelligent and trudged up the forested hillside into the fog, towards the shooting. 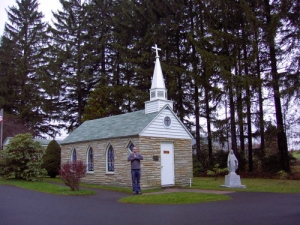 Just before finding the trailhead on Route 219, we made the nearly required highpointer stop at “The Smallest Church in the US.” If that wasn’t silly enough, it sits right next to “The smallest mailing office in the US.” I guess if you are Silver Lake, WV, you figure, “Why not?” (If you Google “smallest church,” you’ll find several others make that claim).

The church and the grounds are very well maintained, and actually quite nice. They have a guest registry and I noted that a couple from our hometown in Connecticut had visited this oddity just a few days prior to us. Small church, small post office… Small world. In the somewhat hidden parking lot, Hoang and I changed out of our hipster clothes and into our highpointing outfits. 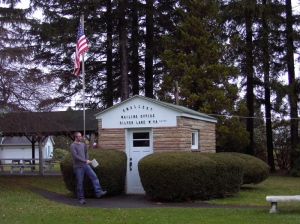 Why would we have bothered with hipster outfits out here in this neck of the woods in the first place? As you may have read in previous trip reports, I try to make this ridiculous highpointing hobby as fun for my wonderful wife as possible. For her, I think the highlight of this PA-MD-WV loop was Frank Lloyd Wright’s Fallingwater house he designed for the Kaufmann’s back in the 1930’s. We are both fans of modern design and Wright’s house certainly has elements we love. The open floor plan and ample natural light being the coolest. We couldn’t simply visit an icon of modern design in our dumpy hiking clothes! The house is beautiful and the 75-minute tour was very informative and interesting. Owing to the Kaufmann’s love of nature and privacy, Fallingwater is certainly out of the way, but well worth the trip. It’s actually pretty close to Mt. Davis, Pennsylvania’s highpoint, but the roads are all slow and hilly two laners. After spending almost two hours at the house, I was getting antsy to hit the road to Backbone. There were only a few more hours of daylight left, after all. 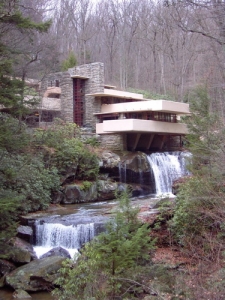 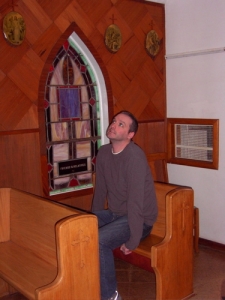 So, on the way south, we stopped at the previously mentioned church and changed our pants and shoes. The drive to the trailhead from the church is only a minute or two, and there was ample signage heading south. In fact, because this has apparently been a problem in the past, there are now 3 distinct signs marking the spot. You’d have to be blind to miss them, especially if you are looking for them. Part of me was leery about leaving the car along the road with half our stuff visible to passers by in the backseat. It’s a pretty lonely stretch of road and Connecticut plates on a newish car out here just screams, “Break into me and steal my stuff!” Then I remembered how that stuff supposedly doesn’t happen in states like WV, only in places like Hard Hittin’ New Britain, CT (3 times in 3 years to Hoang). 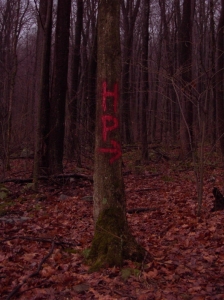 Thick cloud cover and a muddy trail greeted us as we began the mile or so hike up. 95% of the hike is in WV, just crossing over into Maryland along the ridgeline near the end. The old jeep trail climbed gradually but steadily, and was made nicer with some long switchbacks. Unfortunately, the overzealously marked trail also wound us closer and closer to the gunfire. Foggy, empty, quiet woods, only punctuated by seemingly closer and closer gunfire achieves one thing; it makes a hiker ascend much faster than usual. There was a bunch of orange plastic tape hanging from trees along the way, which we wrapped around our heads and arms. We also decided that singing bad songs loudly would alert even the drunkest hunter to the fact that we weren’t deer. Fortunately, it worked. Well, either the orange tape, the bad singing, or the visit to the smallest church in the country worked… Whichever it was, we’ll take it.

Once up on the ridge, the trail swings left 180 degrees and makes a beeline for the highpoint of Maryland. After about 20 minutes at a good clip (we’re in much better shape than back on Mt. Marcy in early September) and almost there, the trail splits — one way goes to the WV/MD border marker #3, and the other goes directly to the highpoint. I may be dumb for hiking amongst shotgun pellets, but I’m not as dumb as the guy who made this sign. My confusion as to which way to go is evident: 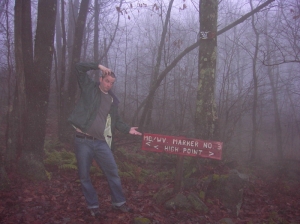 We went right (though I think you can go both ways, but it was too foggy to be sure) and within a minute or two, we were sitting at the picnic table and reading the Hoye-Crest sign. As this was the only actual hiking we’d do on this trip (except for the trudge along the Interstate in Pittsburgh the night before and the longer walk from our hotel to Georgetown in DC the next night – both in heels for Hoang) I took a moment to enjoy the moment of this, our 15th highpoint together. 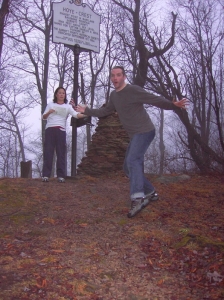 A unique aspect at Backbone’s summit is the mailbox with certificates of completion inside it, in addition to the register. I thought this was a pretty cool thing to have up there. The picnic table afforded us a nice camera-timer summit picture, but as you can see, the camera was being extra annoying that day, only allowing 3 seconds before the shutter snapped. (This is the same aggravating camera that wouldn’t take a picture of Lance Armstrong when he was a foot in front of me in Georgia). Hoang has assured me though, that this is her favorite summit pose picture yet. (I’ve learned that she likes anytime I look goofy in a picture). I assume there was a view of some sort, but not on this gloomy day.

Owing to tradition (and lingering fears of suffering sucking chest wounds), we practically ran down the same wet and slippery trail we came up. Again, Hoang proceeded with nary a slip or trip. Gazelle-like me, however, suffered many stumbles… Never falling down, but still enough to make me feel clumsy next to Hoang’s sublime elegance. 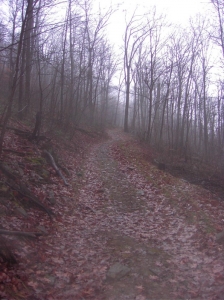 The car was fine, no one got shot, and the drive to the Canaan Valley Resort was a short one. The bucolic West Virginia scenery is very pretty out here. The Appalachia poverty you read so much about is barely evident here. Sure, there is an assortment of trailers, but everything looked well kept and the people we spoke with at gas stations and at the resort were all exceedingly nice.

In fact, the resort was the perfect end to our 3rd day of this continuing very strange road trip. It was almost completely empty (think, “The Shining”) and the rampant deer were so used to humans, they’d almost attack you if they thought you had food. We ate dinner in the bar area (alone) and had an interesting chat with the local woman running the show. Her icebreaker with us was, “Y’all down here for the deer hunting?” We both maintained our composure despite the oddity of the question. (One must admit we hardly look like hunters). It turned out that the next day, Monday, was to be opening day in West Virginia for deer hunting.

Apparently the entire state shuts down and every man worth his salt wakes up before dawn, heads out to the woods with his buddies, and aims to kill as many deer as possible. We had no idea (and now I felt better knowing I was right about it being a shooting range earlier, rather than a free for all) and the bartender seemed to enjoy telling us all about the wonders of hunting. We were very gracious and feigned interest for a good half hour, partially because of her loneliness. I retired that night wondering what the opening day of hunting meant for us… As you’ll read in the next highpoint report, it meant a lot. 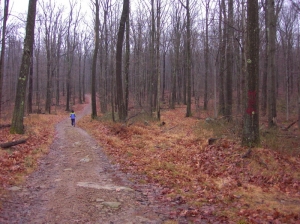 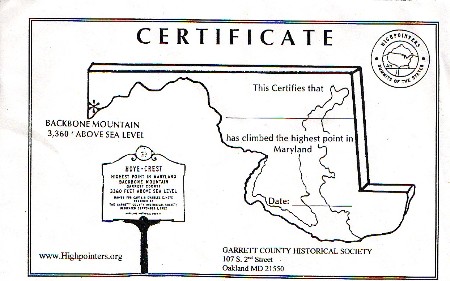