It just occurred to me that if I assume I go to about 600 museums in Connecticut when all is said and done – which is a fair assumption – I’m now about one quarter done. That took about 3.5 years so that means I’ll be at this another 10 years or so. Rather sobering to think about. 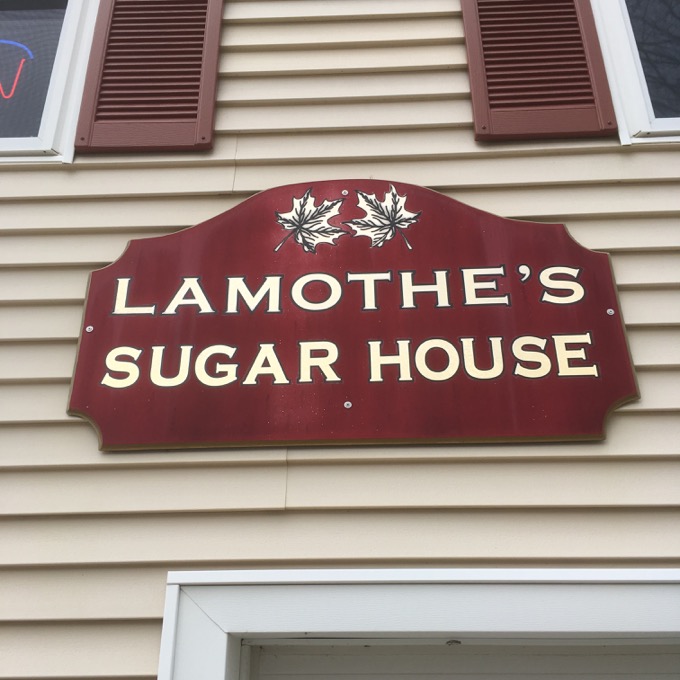 2018 Update: Oh silly 2010 Steve! Not even remotely close. We revisited Lamothe’s in 2018 because Calvin loves maple syrup more than anyone should, so there’s a mix of old pictures and new.

So we won’t. But I mentioned those statistics to preface this post about my visit to a sugaring operation in the hinterlands of Burlington. While it’s not a museum per se, I wanted to visit one of Connecticut’s sugarhouses, take a tour, spend some time there and document it to sort of represent the entire breadth of sugarhouses in the state. Obviously, there is no need to visit all 40 (or so) joints around the state, so we visited the biggest one with possibly the nicest family running the show – and I’ve decided it is a “museum.” At least enough of one to warrant an entry – and really, after you read this, I think you’ll agree. 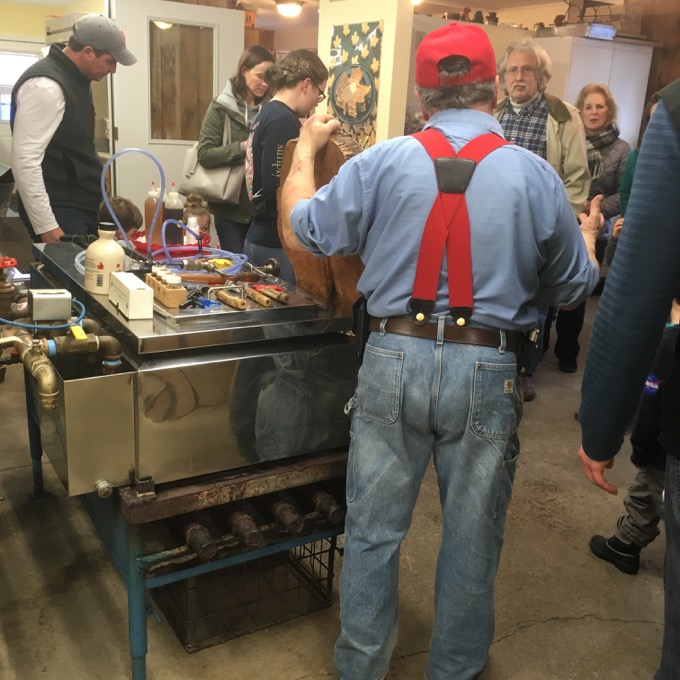 And if not, go start a “1 million strong against CTMQ naming Lamothe’s Sugar House a Museum” group on Facebook.

Now that we’ve gotten rid of the riff-raff around here, let’s get to the good stuff. Let’s start with Lamothe’s location. If you’ve read anything about my hikes along the many arms of the Tunxis Trail in Burlington (You haven’t?! You can catch up here), you know the town steadfastly clings to remaining as undeveloped as possible. Of course, this is impossible and a new housing development is being built on Jonnycake Mountain as I type, completely disrupting a really neat section of the Tunxis White Dot trail over and across the open summit. Sigh. 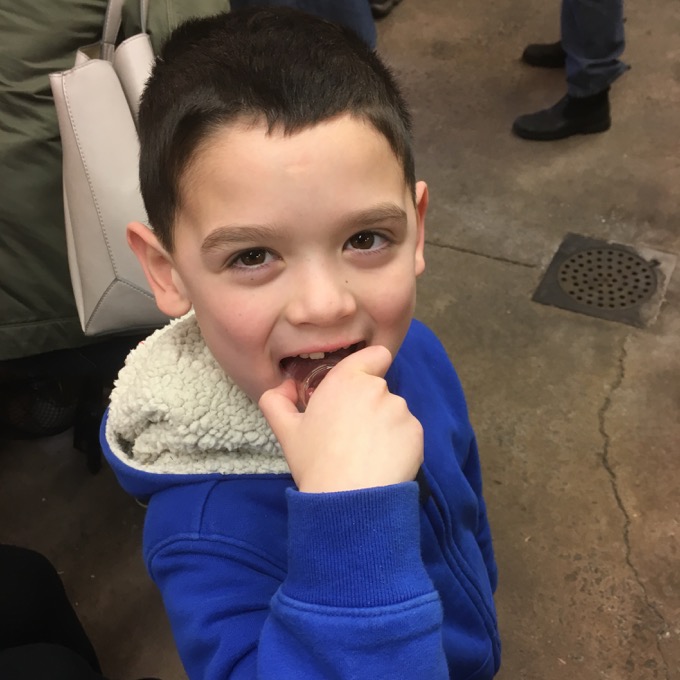 Free samples are the best!

Further east, the true blue Tunxis shares some time with Stone Road. Stone Road is another Burlington partially unpaved roads though the woods – so if you’re visiting Lamothe’s and choose to come down from the north, just be wary about that. It was snow/ice covered in early February, but easily passable. 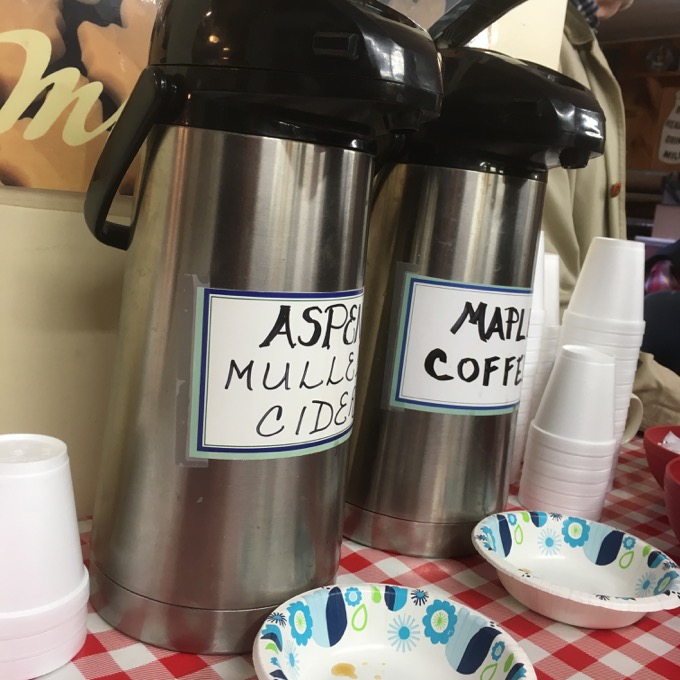 We arrived, four strong. My parents were up visiting for Damian’s birthday so my dad was along for the ride. (Me mum chose not to venture out in the cold.) It was about 12:45, a little early for the first tour at 1, but that was okay. Entering Lamothe’s is essentially entering the Lamothe family room. Oh sure, it’s a fairly large retail store and the backrooms contain the guts of the operation, but the whole time we were there, three generations of family was in and out, attending to the various operations. And yet, somehow I didn’t feel as though we were intruding either – even if Damian sat in the office chair and watched “Bob the Builder” on the computer for half an hour. 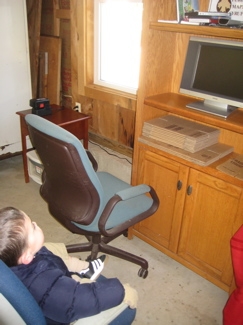 As my pops, Hoang and I mulled around the room checking out all the equipment, a rather well-informed kid began to teach us a few things about sugaring. “The show doesn’t start for a little while,” he said, “but I’ll show you how we tap the trees.” Knowing we’d be shown again is short order, I concentrated more on the many articles about Lamothe’s that filled the walls of the room. 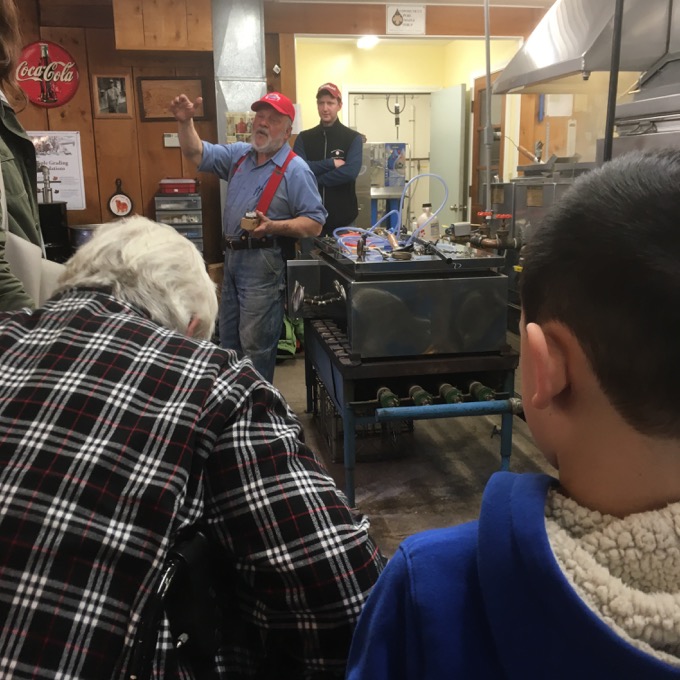 Or at least I thought I would… the young man commanded the room, chided me for not paying full enough attention… this kid was good. Before too long, a rather hardy looking gentleman appeared, removed his heavy coat, and welcomed us to his maple sugar farm. As Damian kept watching the DVD that wasn’t his on a computer that wasn’t his on a swivel chair that wasn’t his, we learned all about the various processes of making maple sugar products – and yes, it IS actually interesting. 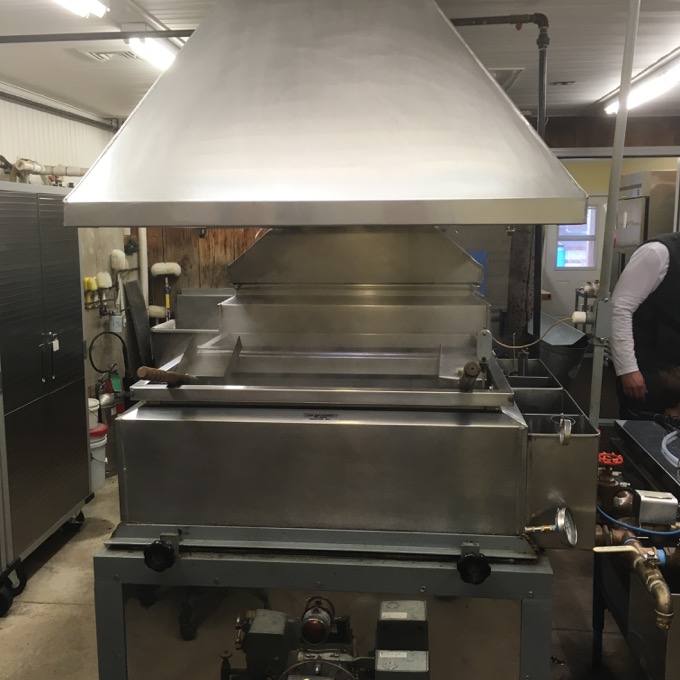 We also learned the Lamothe story:

We started making maple syrup a number of years ago, with a modest beginning of 7 taps in 1971. It was Leonard, Rob’s brother who decided to give tapping our maple trees a try. We made maple syrup for our own use at first, but soon had requests for purchases of maple syrup. We soon found demand was greater than our supply and a number of times expanded our number of taps, and size of operation. 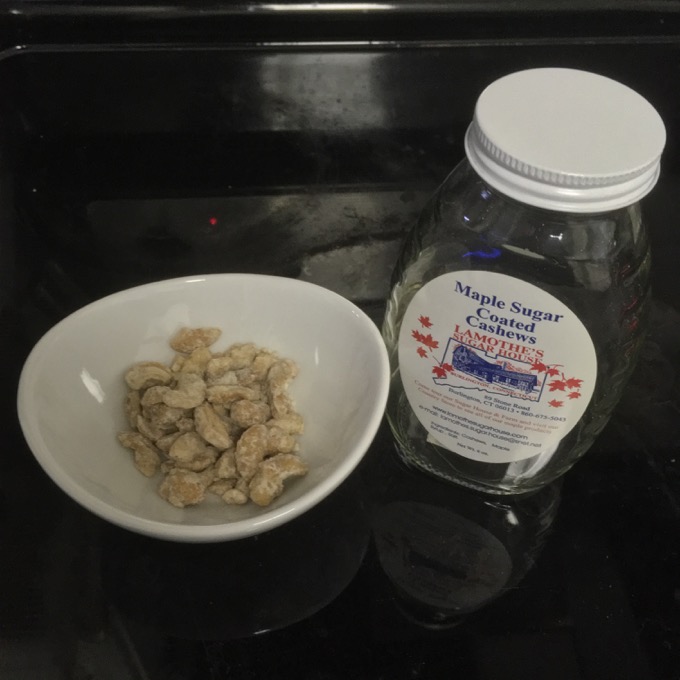 Along the way we had many requests for pure maple candy and cream, and have had quite a demand for our confections. We have since expanded our confections to include several kinds of maple candies. We have maple hard candies, and maple walnut caramels that melt in your mouth. We also make granulated maple sugar. It is very similar to brown sugar, but is dryer. We have come a long way since the first 7 taps, expanding to more than 4500 taps, and into our present sugar house, and a much larger evaporator. We have expanded into a larger showroom with many new items and have room now for larger groups. 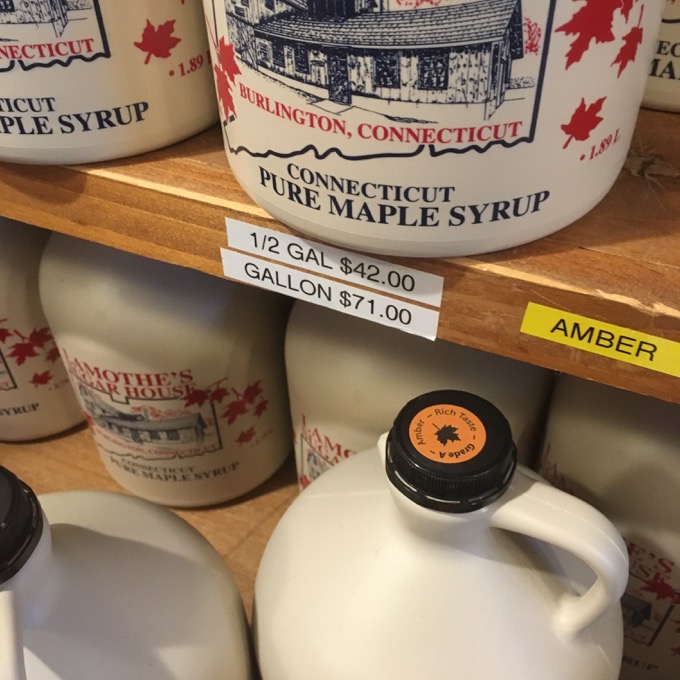 Yeah, when we were told they ran 4500 taps and 15 miles of lines, I was amazed. That is a LOT of maple sap collected here. (They are the largest sugaring operation in Connecticut.) We relearned how to tap the maple trees and exactly when to expect the sap to flow. It was a bit too cold during our visit to have enough sap to get the boiler going – but that’s not necessarily a bad thing as then our visit would be loud and hot. We enjoyed the quiet and calmness while there. 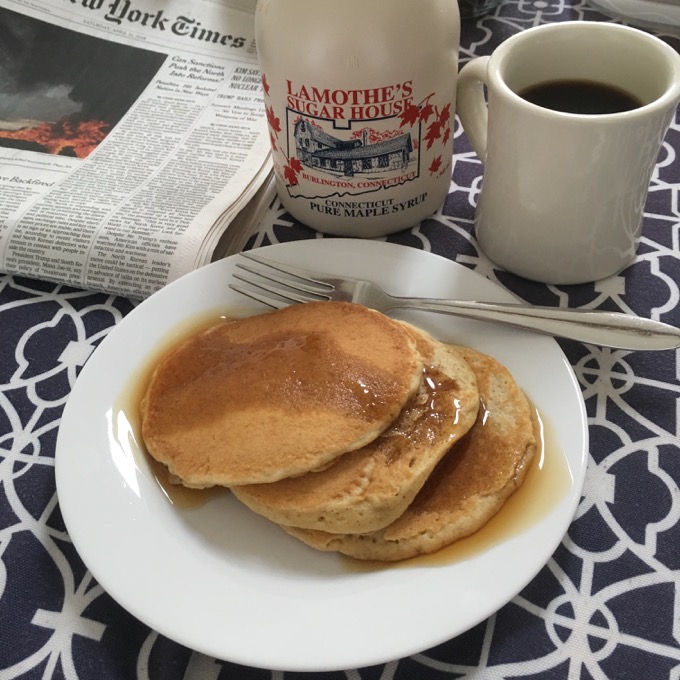 I learned that the ratio of sap to sugar is 39:1. (And I just read on another website it’s 55:1. Anyway, I learned the maple sap is far, far less viscous than I thought it was. I learned all about their reverse-osmosis machine and how it saves the operation a ton on fuel oil bills. The reverse osmosis machine separates water from water-soluble solids and can reduce the boiling process in half. From the reverse osmosis machines the sap concentrate goes into the boiler. At this point it only takes approximately eleven gallons of the sap concentrate to create a gallon of maple syrup. Between the reverse osmosis process and the boiling, the sap goes from 2% or 3% sugar to 66% sugar in the final syrup. 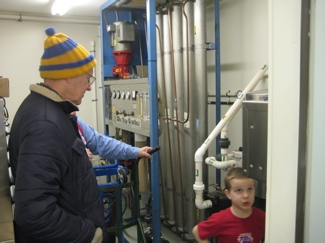 Once the syrup is complete, there are different grades of maple syrup – you can learn all about it here and even got to taste the differences.

Oddly, both Hoang and I really liked what we were given – and we didn’t think we liked real maple syrup! I think we’ve always been given the Grade B or C stuff which is very dark and very rich in maple flavor. We really liked the lighter grades. 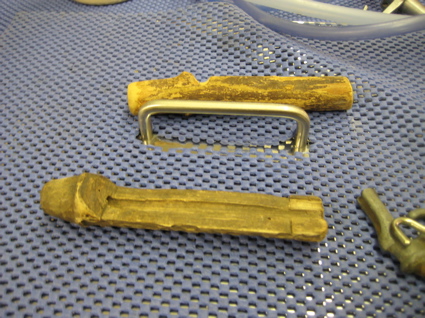 Speaking of really liking their products, Damian had hopped off his chair and somehow found the free samples table. He then proceeded to devour several crackers with a rhubarb-maple jam on them, followed by several more with an apple-maple jam. I tasted that second one and it was delicious. In fact, I ended up buying a small jar of the stuff before leaving. They offered several other samples of maple fudge and maple covered nuts and things like that. Various maple coffees and ciders were on offer as well. 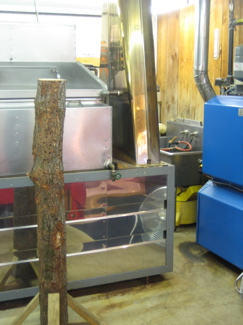 I love the maple tree that’s been there for a decade.

My dad ended up talking with the proprietor for a while about the equipment, the operation, the finances… you know, all that stuff only my dad would care about. I spent the time really thinking about how much I appreciate sustainable farmers like the Lamothes. They raise pigs for slaughter (I think for personal consumption) as well as rabbits. They maintain 850 bee hives and produce all sorts of honey products as well. (They also have a firewood stand and a fabricating business to pay a few more bills.) 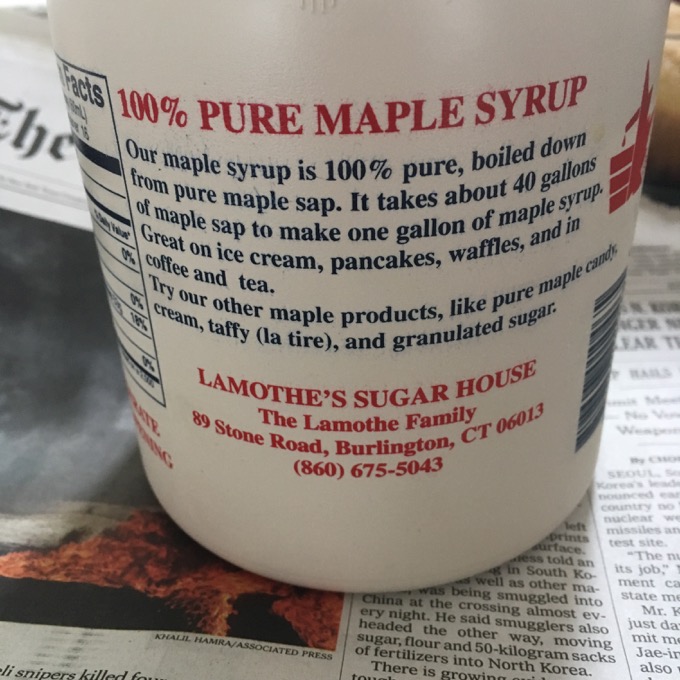 This is life off a skinny woodland road in Burlington. The entire family seemed happy and proud of what they do. I highly recommend you visit them – they’re open year-round but really, the best time is February and March with the tours and to watch them boil the sap.

If you don’t believe me, during a quiet moment back at home while making dinner Hoang turned to me and said, “I enjoyed our trip today a lot – and I didn’t think I’d like it at all.” Enough said. 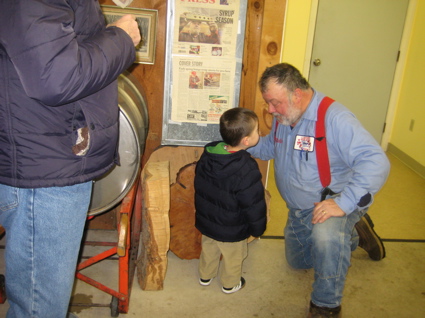 Damian stares down Mr. Lamothe in 2010, who was wearing the same outfit as in our 2018 visit, to get the lowdown on making maple syrup