Wow, the Westport Historical Society has done a bang-up job on their page about this small museum, adjacent to the much larger Wheeler House Museum across the small driveway. It’s almost like I don’t have to write anything myself and heck, they’ve even supplied over 50 pictures from which I could choose from. Perhaps we don’t even have to visit (requiring the docent from the house to unlock it just for us)… Nah, of course we have to visit! I want to, Hoang wants to and of course Damian wants to, right buddy? 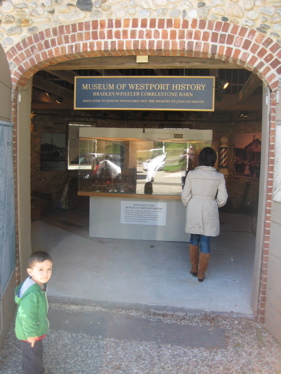 Hm. From that scowl and that middle finger in the picture above I might be led to believe Damian didn’t want to check out another museum. Oh don’t be silly, let’s go inside the small space (which a sign states can only hold 10 people at a time). And besides, this joint was built (most likely) by a dude named Farmin Patchin. Farmin Patchin Damian! That’s just awesome. 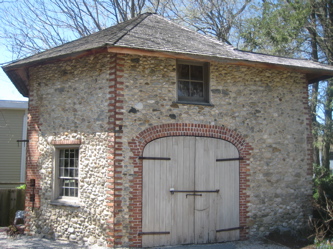 On the northwest corner of the Wheeler House property stands an unusual cobblestone barn with a conical, octagonal roof. It appears that the barn was built by Farmin Patchin, a stonemason and blacksmith, during his ownership of the property between 1846-1857. The construction of octagonal houses and barns became popular in the eastern United States between 1840-1860, prompting Orson S. Fowler to write “The Octagonal Home for all”, claiming it contained more space, was easier to build and geometrically approaches that of the spire – nature’s governing form. In point of fact, the Bradley-Wheeler Barn is heptagonal (seven sided). The northeast corner of the barn was squared off, evidently to fit tightly against an attached wood frame barn (no longer standing). This made the base of the cobblestone barn seven sided. After considerable research there is still no definitive conclusions as to the original uses of the barn. The two-story structure with a partial root cellar still holds many mysteries. 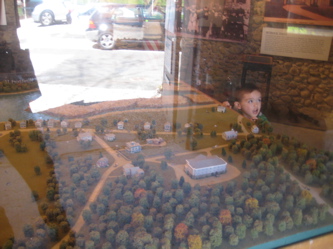 Haha, that’s pretty funny. It’s called an octagonal barn in all the Wheeler House/Westport Historical Society literature and yet, it’s heptagonal. The roof is octagonal, but that’s a lie. A LIE I says!

The Bradley Wheeler Cobblestone Barn, renovated in 1994, houses the Museum of Westport History that chronicles the history of Westport from the time of the native Americans to the present day. A fascinating panorama of Westport’s development is created through a combination of large historical photographs and authentic local artifacts. Visitors will see the growth and development of trades and occupations in the agricultural, mercantile, industrial and maritime lifestyles that have contributed to the history of Westport. 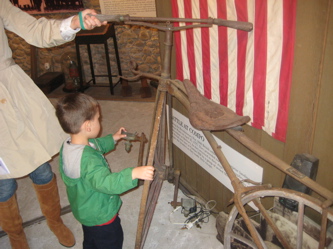 Nice. It’s sort of an interesting set-up they have here in Westport, with the separation of the two museums. But it works well, I must say. On top of that, the octaheptagonal barn is cool and the diorama/train layout is awesome. But let’s start downstairs…

On display is a 5 foot square model of the town from the 1860s, built in 1999 by Tom Clough, with a generous donation from Barbara and Ray Howard. Joanne Woodward, who has been an outstanding supporter of the Westport Historical Society, along with her husband Paul Newman and has recorded a dramatic and informative audio accompaniment to the display. 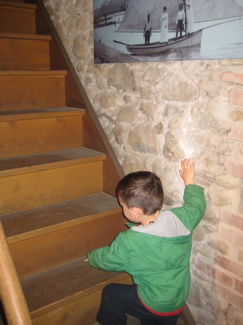 Wha wha whaaa!? Gotta love Westport. You know as you read that sentence you didn’t really pause on the name Joanne Woodward until your read the name Paul Newman. That’s Westport for you… The couple were generous to the town in many ways.

Around the 1860 display (which is actually pretty rudimentary, because there really wasn’t much here anyway), the society has squeezed in a ton of history and presented it as well as they could. An old map hangs on back of the large entrance door and informative signs ring the octoheptagonal room, taking visitors from pre-colonial times through the 19th century. All the usual stuff is there: A blurb on the Native Americans who lived there, a bit on the first English to set foot in present-day Westport. (They happened to build log huts over in the Greens Farms area of Westport, if you’re curious.) 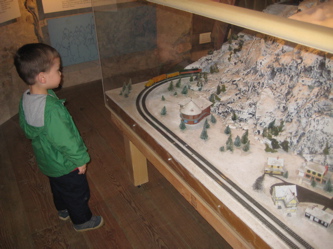 Some early church stuff, a bunch of old farming implements and then up through Westport’s time as a maritime center. After that, they became a manufacturing town and then the railroad came through. Westport was “viciously opposed” to the railroad coming through town, because it was already a hotspot of trade and commerce due to its location on the Sound and along the Boston Post Road. They more-or-less gave away the right-of-way land for a whopping $200 and trains began running through town in 1848, connecting Bridgeport to New York.

After Damian got through with pushing the buttons that triggered lights on the old town layout, we made our way (carefully) up the steep stairs to the 2nd floor, such as it is. On the second floor of the barn is The Swezey, the very same train that moved around the store window of Swezey Jewelers, one of the oldest family-run businesses in Westport which operated in downtown Westport for over 50 years. The Swezey, which was generously donated by Donna and Michael Brody, delighted children and adults for many holiday seasons. 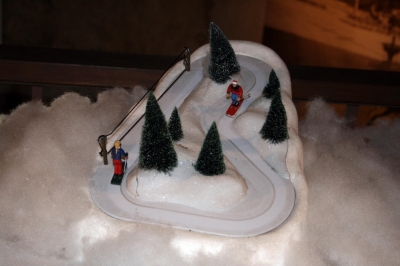 The train was meticulously restored and put together with devoted admiration by Westport resident and train enthusiast Carles Reedy and his son Josh. Carles spent many hours determining which trains needed to be replaced and how to get the exhibit moving with sound and elegance. Giovanni Urist, Staples graduate and a history major, researched information about the railroad’s historical impact on Westport, and this information is on display next to the exhibit. 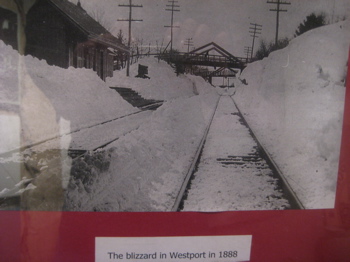 And what a wonderful exhibit it is! Damian (who already loves trains) fell in love with the random little winter scenes of kids sledding via magnetized tracks and skating around ponds. It sure was nice that a little guy like him could see the whole layout himself by standing on a nice step-up the museum built for kids. The train layout was definitely cool, and I’m sure it’s much cooler for Westporters who recognize all the stuff around the train’s “town.”

While Damian enjoyed the train, Hoang and I read up on the other stuff about Westport. There is a display about how it became suburban and expanded north away from the Sound. They never really said how it’s a rich town and how Martha Stewart used to live here before prison, but it’s just understood I guess.

We read about how Westport became an artist enclave of New York in the late 1800’s and into the 1900’s. (After that, Westport/Weston became “the place” for New York’s advertising and graphical design – think “Mad Men” – elite to live. That is still the case, to a degree, today.) As I mentioned, one rather famous couple made Westport their home. And no matter how silly they try to make him look with a boater’s hat and striped blazer, no one can deny those eyes: 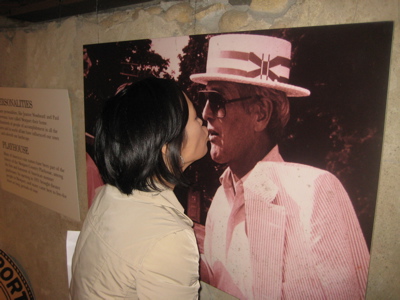 I said no one! 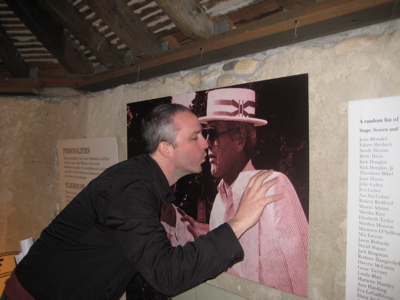