Ah, beautiful New Haven. Famed for its venerable university with brilliant students, incredible history and world class museums. Museums like The Ethnic Heritage Center, housed in what appears to be a giant cargo ship container on the edge of the university’s campus. 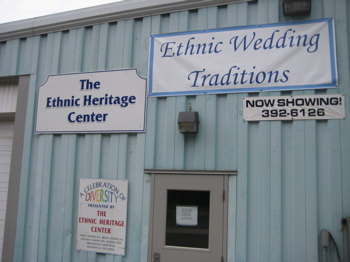 (Seriously, have a look.)

Yes folks, The Ethnic Heritage Center at Southern Connecticut State University is a wealth of – hold on, what? You’re confused? Oh! You thought this would be another Yale museum? No, no, this place is a proud piece of SCSU – and it’s great. Okay, it’s not exactly the British Art Museum at Yale, but it’s just as good in its own way.

Or at least almost as good. For what it is… a collection of five ethnic historical societies housed together in a cargo ship container. This is one of the places I’ve toured for CTMQ that are simply fascinating. Like, how did this place come to be? How many non-Italian, non-black, non-Ukranian, non-Jewish, non-Irish people (like me) visit this place and walk around taking fifty pictures? Who knows, but at least as a white Germanic-Englishman married to an Vietnamese woman of Chinese descent I was warmly welcomed and offered free donuts and coffee. 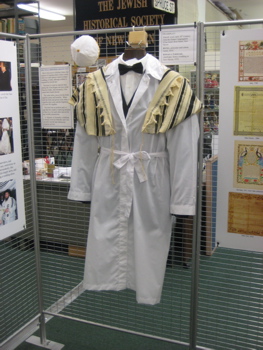 That’s right, how many museums greet you with a fairly large spread of Dunkin’ Donuts’ finest offerings? A rather large man sat at a table front and center and pleaded for me to eat and drink his spread. I declined because, well, because that’s what we Germanic-English sons of a Baptists politely do for some reason. No need to draw attention to myself anymore than I was about to do by taking pictures around the joint. (Of course, if I had my Germanic-English-Vietnamese-of-Chinese descent four-year-old with me, he’d have happily stuffed a donut down his gullet. Those southeastern Asian genes of his never say no to free donuts.) 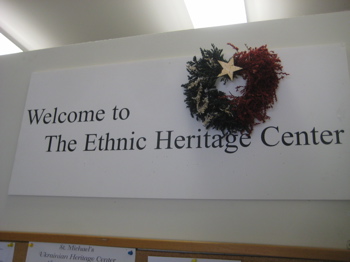 Enough about me. What in the world IS this place anyway? First off, the buildings (there are two cargo container buildings, side by side) were given to the societies by SCSU. Beggars can’t be choosers. One building is dedicated to their public activities and programs (exhibits, author events, lectures, films, meetings; SCSU classes often meet here, in conjunction with exhibits). The other building is dedicated to storage of the two collections for which the Ethnic Heritage Center has been named custodian: New Haven Public School enrollment records and the Connecticut Afro-American Historical Society, plus Ethnic Heritage Center archives and spillover of less-used material from our member societies. 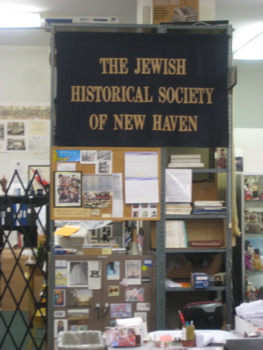 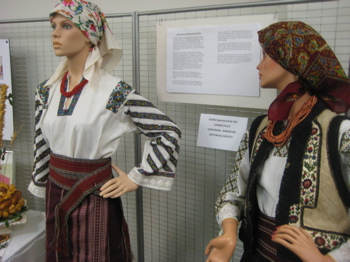 The building and displays are more-or-less culturally separated, but even so, they all sort of bleed into each other. But after all, isn’t that what America is all about?

Okay, enough of that. From what I gathered, each society has an archives and a very small little permanent display area. During my visit, the exhibit was all about Wedding traditions, so each ethnicity had a little set-up about their culture’s wedding traditions. Let’s start with the… The Italians.

Their little “about” blurb is pretty sparse: The Society publishes a newsletter, La Storia, four times a year. It contains articles on fascinating and distinguished people, historical and statistical information, and personal experiences.” Fascinating. The little area on Italian weddings did contain some stuff I wasn’t familiar with though. 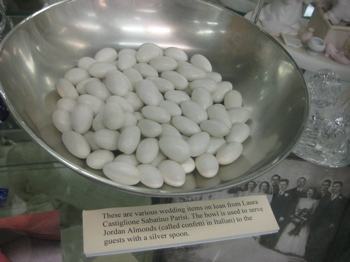 Like how at Italian weddings they serve Jordan almonds and that they are called confetti. Hm, that seems to be it for what I learned about Italian weddings. Though I did enjoy the Leaning Tower of Pisa wedding cake with the gondolier on it. And there’s some old restored organ here that’s part of the Italians too, I think. 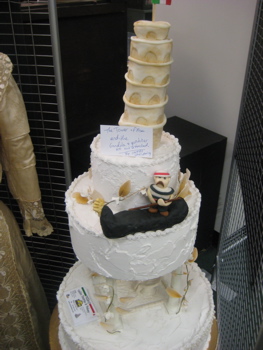 Moving over to the Jews, I’m happy to report their “about” page is far more extensive.

Established in 1976, under the leadership of its founder and first president, the late Harvey N. Ladin, the Society is devoted to the effort of collecting and cataloging the Greater New Haven Jewish community’s eventful past, publicizing the history of the Jewish community, and serving as a catalyst in preserving its heritage.

It continues on a bit. 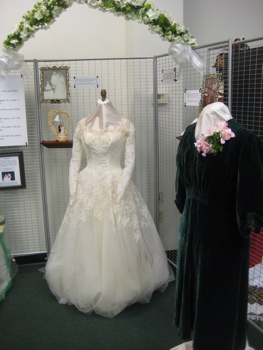 I did learn a lot about Jewish wedding traditions and found out that Matchmakers, which I though was just a myth, are actually real. Especially in ultra-religious communities. There was a nice display that explained all the traditions regarding the silk ribbon canopy and the glass-breaking they do.

The sign said that its origins are unknown, but in typical Jewish fashion made it into some guilt thing – that despite the revelry, Jews must still remember and mourn the destruction of the Temple of Jerusalem. Yay! These days, some couples see the glass as a reminder of what marriage is – something fragile that once broken may be beyond repair. To that I’d say, “Why did you stomp on it then?” 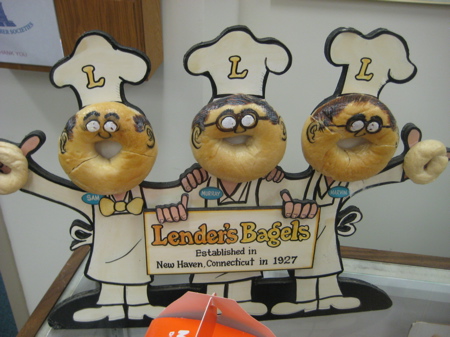 Lenders is a New Haven company

I was most fascinated to learn about Yichud. After the ceremony, the couple adjourns to a private locked room to be alone. Back in the day, and perhaps in ultra-orthodox sects today, couples were never allowed to be alone before marriage. This was the time when they were to get down with each other for the first time. How romantic! Today, it’s used to sort of hang out and maybe pray or exchange gifts and for the bride to put on some jewelry, since that’s apparently not allowed during the ceremony.

Mazel tov to them and now a fine fiddle to our Irish friends. The Connecticut Irish-American Historical Society was founded in 1988 as a non-profit organization to research, preserve, and publicize the history of Connecticut’s Irish people. Their “about” page is the best so far.

What’s weird about this is that about a month prior I went to a wedding in New York for some friends. One prides himself in his Czech heritage and the other, his bride, must be predominantly Irish despite her Nordic last name. Why? Because we as guests received some nice pebbles. Hoang and I knew it must have meant something, but we didn’t know what, got pretty drunk that night and forgot about the pebbles.

Then I came here and learned: 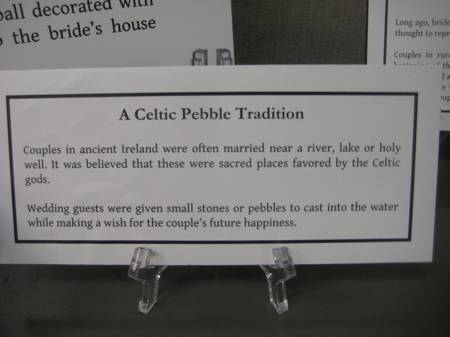 Now we know. That’s pretty cute and certainly harmless and if Rob and/or Yvonne ever read this – we tossed our pebbles and wished you a very long and happy and healthy marriage. Unless, that is, you tell me you did any of this nonsense before your wedding: 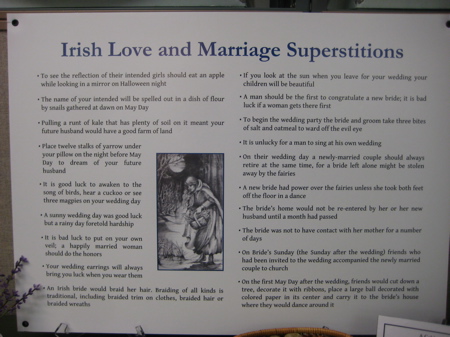 There were a bunch more Irish wedding traditions on another sign, the most interesting of which was called Handfasting. I can think of a few jokes, none of which have anything in the world to do with actual Irish handfasting. There seems to be some debate about it, but it was basically a trial period before a “real” marriage with no legalities involved. This was probably before dating – and Tweeting and FaceTiming as we know it today though. NOW we do it the right way. 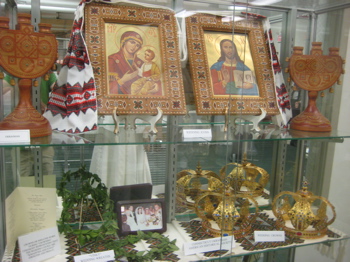 That leaves the Africans and the Ukrainians. Let’s go with the Africans next. The purpose/mission of the Society is to promote a greater understanding of African American heritage and culture through the collection, preservation, display and presentation of historical and cultural materials relating to peoples of African descent. The Society serves as an advocate for those programs and initiatives that support a better understanding of the history of African Americans in the greater New Haven area.

There were two stories of wedding traditions on display: that of the Nile region and those of the Woyo people of Zaire. The descriptions were of very traditional peoples and part of me wonders if many New Haven black people wander in here and perhaps take offense that the “traditions” displayed are of the most “traditional” variety. 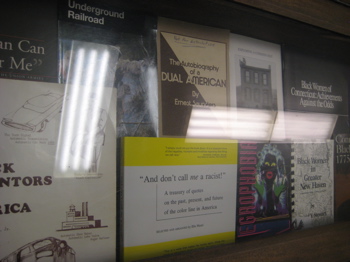 For instance, the sign notes that the Nile peoples run around naked and give each other goats and cattle as dowry and then the newly married go and do it in a tent while the families trade more goats and cows. While I’m sure it’s true, if this is the “African-American” experience, I don’t think that stuff is going on here. And if it is, please let me know.

The other African tradition told about the Woyo people and how the new wife gets a set of pot lids with different proverbs inscribed on them. Here’s a quote from the sign: “If a husband abuses his wife in some way or if the wife is unhappy, she serves the husband’s supper in a bowl that is covered with a lid decorated with the appropriate proverb. She can make her complaints public by using such a lid when her husband brings his friends home for dinner.” That’s a little weird, right? 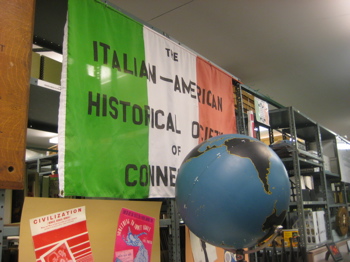 The last group repped here are the Ukrainians. To me, it seemed like they had the most informative wedding display but perhaps that’s only because it was the most “foreign” in a way. “The history of Ukraine has been marked by countless periods of foreign domination, forced influences, and oppression. Yet, throughout centuries of struggle, the Ukrainian people have managed to create and maintain an identity that is unique.”

There was a 4 page typewritten sign about the Ukrainian wedding called “Vinchannia” that I really don’t feel like recapitulating here. Just know that all the stuff they do is a mixture of Eastern Rite Christianity and Ukraine’s ancient pagan past. One thing they do is to give each other crowns which I mention because there’s a picture somewhere on this page of crowns. 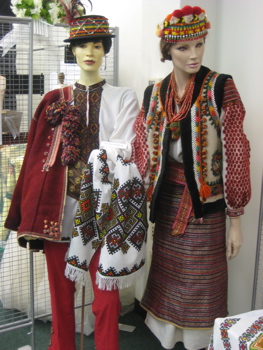 The Ukrainians went all out with full mannequin wedding attire, foodstuffs, maps, histories and more. I felt so well-informed that I came home and talked to my Ukrainian neighbor about her country’s traditions. (I didn’t really, but I felt like I could have.)

Foodstuffs? Yeah, there were a couple (real? plastic?) korovai loaves. The Korovai is a traditional Ukrainian celebration bread used at weddings and anniversaries that symbolizes family and community. The parents of the newlyweds greet them with bread and salt. The Korovai is adorned with ornaments of baked dough: two birds represent the couple, and other ornaments represent family and friends. The entire arrangement is surrounded by a wreath of periwinkle, a symbol of love and purity. It can be shared with the guests as a symbol of good luck and future prosperity. 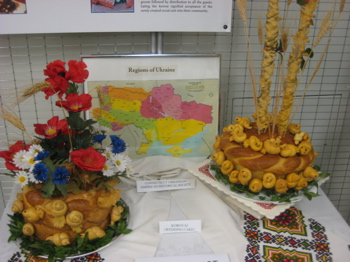 Aside from all the wedding exhibits, there was another permanent display of “Ethnic dolls of the world.” These weren’t confined to the five societies at the museum, so it was like a trip around the doll world. Although my favorites, by far, were the “Contemporary African American football player” dolls. Just so random. 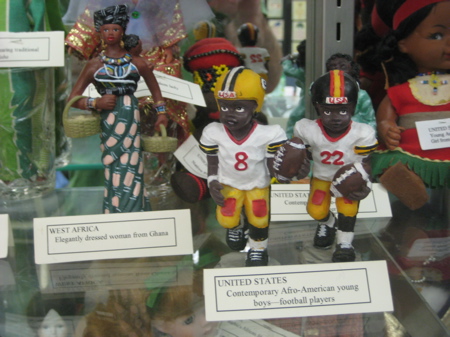 There is one nod to my heritage here. On my way out I paused to make note of the drawing of one Roger Sherman, noted in the caption as New Haven’s “first mayor of English stock.” Ah yes, my English forefathers had to fight exactly zero years of oppression and discrimination to become mayor of such an important city. The untold tears that were shed over the white Englishman’s plight in the city they created are infinite. 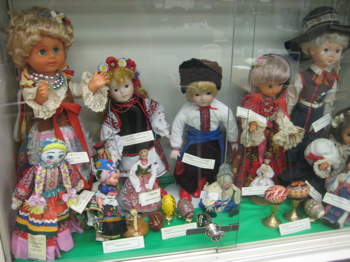 One last thing – I was married in the month of May (You can actually see a few picture of that here, in a post about a Historic CT Garden) so I found this absurd Irish thing pretty absurd: 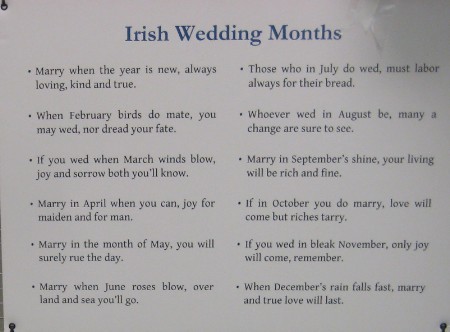 I enjoyed my time at the Ethnic Center and for those of you who think New Haven is just Yale and hoity-toity Yale museums… you need to explore more. I never got munchkins at a Yale museum. 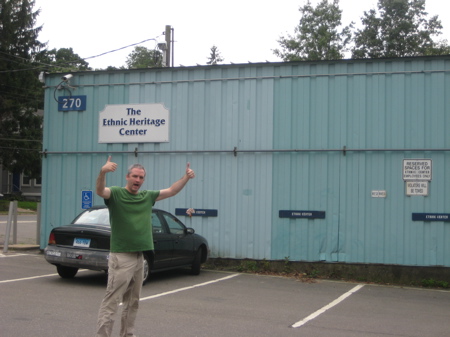