The World in the Palmer of His Hand
Stonington (Google Maps location)
September 3, 2010

I’ve been known in these very pages to whine about the fact that there are so many historic house museums in Connecticut for me to visit. It’s not even the visits themselves I whine about – it’s the process of writing about them each in a unique and interesting way. It’s all about you. I do everything for you.

(As if anyone reads these museum pages. Hey, let me maintain the fantasy.) 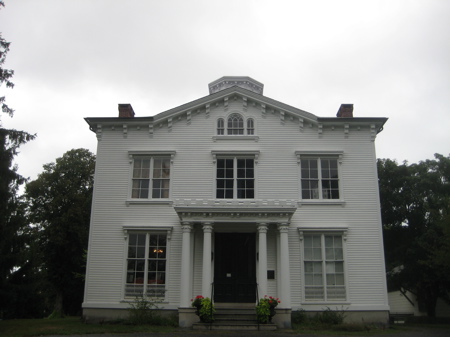 Really? That’s what I fantasize about? People reading my pages about museums on CTMQ? Yeah, I’m getting old.

I’m happy to tell you, the thousands of you reading this, that the Palmer House is definitely NOT your run-of-the-mill historic house museum. Not at all. Why? Because it’s not the repository of a town’s historical artifacts, that’s why. In Stonington, a beautiful and historically rich town to begin with, the historical society maintains two museums: This one and the Old Lighthouse Museum which is also cool because it includes an old lighthouse with all the usual town history stuff. 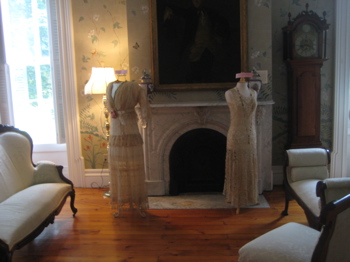 The two museums are just over a mile apart and if you visit Stonington on a nice day, you can handle the walk – in fact, I urge you do so. As far as maritime and quaint and cute and interesting and beautiful towns go, you can’t do much better than Stonington. Alas, we visited during a mock-hurricane so walking wasn’t in the cards for us. 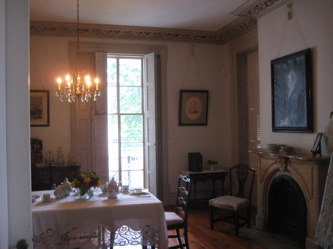 I requested that before I knew how cool this place was though. So for the time I was touring the house, I kept peering out the windows facing our car to make sure Damian wasn’t going berserker. Note: we all survived – Fake hurricane Earl and real Hurricane Damian. (I keep mentioning the fake hurricane – it rained a lot and the wind blew, but was never as bad as it could have been.)

I should also note that your paid admission to the Old Lighthouse Museum gets you in here as well. I’m sure you can do them separately, but why would you? You want the whole Stonington history experience, don’t you? You should. Especially if you’re reading this. 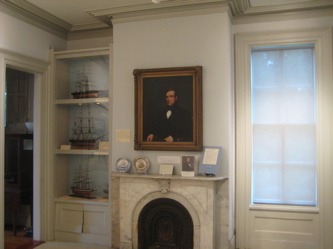 Before going inside, let’s take a moment to recognize the house as the National Historic Landmark that it is. Of course, I’m completing the list of our 60 NHL’s – here’s the somewhat redundant NHL report on the Palmer House.

This 16-room Victorian mansion was built in 1852 by two brothers, Captains Nathaniel Brown Palmer and Alexander Smith Palmer. Majestically sited on a high rise of ground overlooking the upper end of Stonington harbor, “Pine Point” offered sweeping water views in all directions. From its octagonal cupola, the family could identify ships arriving from distant ports. Meticulous craftsmanship of the ornate woodwork testifies to the work of shipwrights. 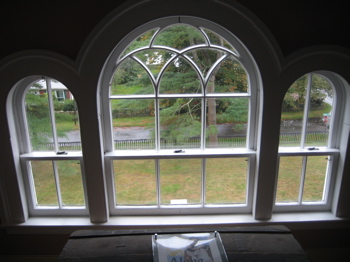 Indeed. It is a really nice house. It’s one of the rare old houses I wouldn’t mind living in. Which makes this next sentence from the Stonington Historical Society especially insane:

Once threatened by demolition, this magnificent home was purchased by the Stonington Historical Society in 1994 and is now preserved in all its beauty. 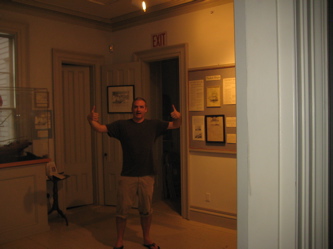 Now I’m not one of those preservationist nuts that never wants to tear down anything, but c’mon… Who in the world wanted to demolish this place? That’s just crazy. The house remained in the Palmer family for four generations – over 125 years

By now you may be asking yourself who this Captain Palmer fellow was. 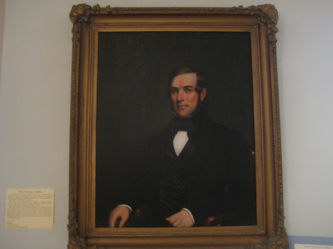 Nathaniel Palmer, born in 1799, and his brother Alexander, born seven years later, went to sea at an early age. Nathaniel became a ship’s master before his 19th birthday as did Alexander by the time he was 21. They were young men who ventured into the most desolate regions of the world in search of profits from sealing and whaling.

During a voyage to the South Atlantic in 1820-21, Nathaniel, captain of the 47-foot sloop Hero, pressed southward in search of new seal rookeries. On November 17, 1820 he sighted “land not yet laid down on my chart.” He had discovered a place which would later become known as Palmer Land on the continent of Antarctica. 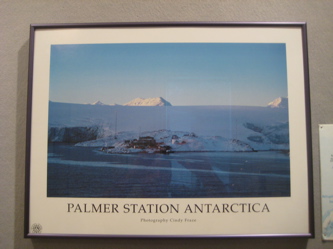 That is the info from the museum’s website. It’s nuanced and contains much truthiness. But there’s more. “Sealing” sounds much nice than “During the 1810s the skins of Antarctic Ocean seals were highly valued as items for trade with China. As a skilled and fearless seal hunter…” which is what Palmer was. I don’t care, as this was 1810, not 2010. Seal hunting was just a job.

But the implication that Palmer was the first person to discover Antarctica is just not true. Palmer and his men became the first Americans and the third group of people to discover the Antarctic Peninsula. Larger ships skippered by Fabian Gottlieb von Bellingshausen and Edward Bransfield had reported sighting land earlier in 1820.

That’s not to say this cat wasn’t important. Heck, his name is all over the place in Antarctica and Mercury. Mercury? Yes, Mercury. 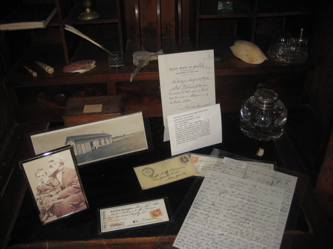 Palmer Land, part of the Antarctic Peninsula, as well as the Palmer Archipelago, were named in his honor. The Antarctic science and research program operated by the U.S. government continues to recall Palmer’s role in the exploration of the Antarctic area. Palmer Station, located in the seal islands that Palmer explored, the clipper ship N.B. Palmer and the Antarctic icebreaker RV Nathaniel B. Palmer are named after Captain Palmer. Hero Bay, in the South Shetland Islands, is named for Captain Palmer’s sloop Hero, one of the vessels of the Pendleton sealing fleet from Stonington which visited the islands in 1820-21. Also named after Palmer’s sloop is Hero Rupes, an escarpment which was discovered in the southern hemisphere of the planet Mercury in 1973. 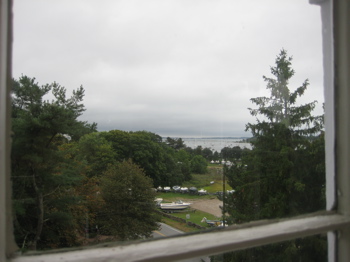 But the whole Antarctica thing was really just a part of who Palmer was. He was a top-notch sailor. He helped design the famous clipper ships of the 19th century and made improvements on sailing technology all the time. Once he was done with sailing, he bought shares in some of the biggest and fastest clipper ships and enjoyed the profits.

Let’s explore the house already. Memorabilia pertaining to Nathaniel’s discovery of Antarctica and the Palmer brothers’ adventurous lives, as well as other Stonington family portraits, furnishings and artifacts are on display. 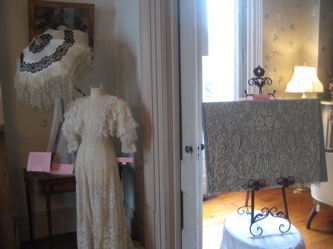 The first part of my tour took in the house set up as it would have been back in the 1800’s. My pictures are pretty terrible, but you get the gist: This is a really well-crafted house with lots of little woodworking details that only top craftsmen like the Palmers could incorporate.

I don’t know who incorporated the perfectly situated monkey wallpaper, but he or she is a genius. (I was told this wallpaper isn’t original.) 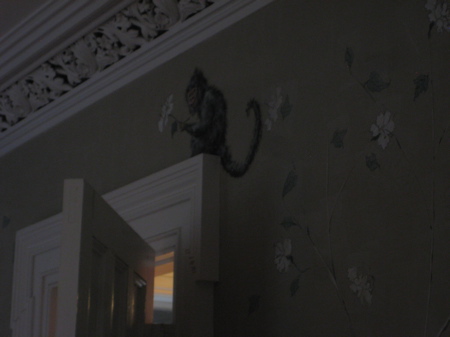 I really liked how the house tour was set up. It seemed purposeful that the first few rooms downstairs (parlor, living room) and upstairs (various bedrooms) were more about the historic period and the fashions and furniture of the time. Then, the next few rooms slowly incorporate the Palmer story and finally back downstairs, there is a full-fledged Palmer exhibit in a few different rooms. Well done. 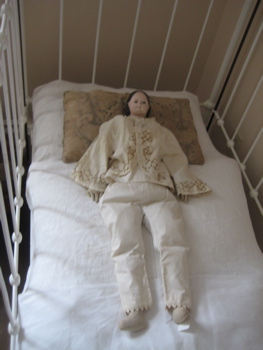 In the upstairs hallway I read a pretty cool little anecdote about how Admiral Byrd visited the Palmer house to study Palmer’s records of his trips south. Byrd hung out up here for days on end, studying Palmer’s papers. I just learned Byrd’s middle name was Evelyn, which makes me happy.

You know what else makes me happy? Cupolas. The Palmer house’s was actually open and the stairs up to it are nuts. The views are nice and since the house is built on a small little hill in this sea-level town, you can see out to the bay easily enough. The Palmers used to hang up here to see who was coming into town.

Back downstairs and to some of the pure-Captain Palmer stuff. I know we’ve talked about the little ship he sailed to Antarctica on, but I’m not sure you fully grasped has crazy it was to sail down there on it. 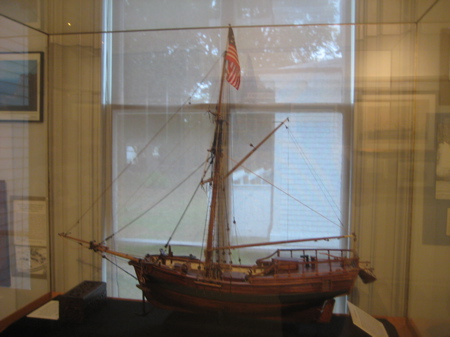 The Hero was built in Groton in 1800 and was only 47 feet long, 16 feet wide and less than 7 feet deep. It had no galley, no head, one deck and one mast. The cargo deck cleared the water by a mere one foot! Captain Palmer and his crew of four sailed almost 20,000 miles on mountainous and frigid seas on their expedition in 1820. A rendering of the Hero and the historical society’s portrait of Captain Palmer were used for a USPS stamp. 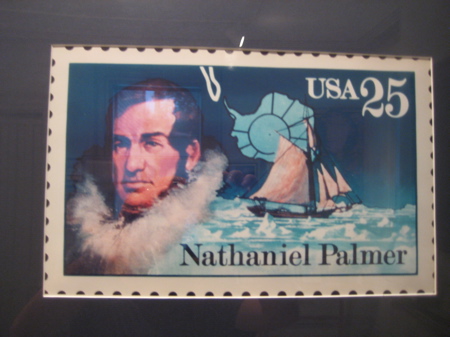 Palmer’s study has been meticulously recreated here at the museum as well, which I rather enjoyed. In it, the society shows some of Ernest Shackleford artifacts from his Antarctic expeditions – which of course occurred a hundred years after Palmer’s.

Oh, and if you’re (justifiably) wondering what’s up with my pants in the pictures, remember that we drove through a hurricane (sorta) and that storm brought impossibly hot and humid air up from the tropics. I was sweating… a lot.

This was a museum, not a fashion show. 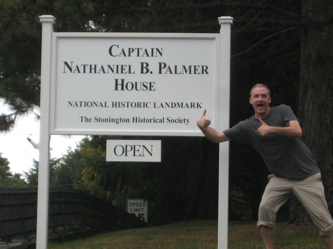