This Burg Could Use Some Wine
Modern Library # 24
1919, Sherwood Anderson 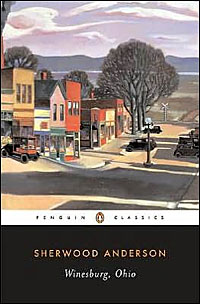 Winesburg, Ohio contains a map of the town on the first page. For that, I already liked the book before I read a word of it. But once I got my head around how this book works, I liked the rest of it as well.

This book could be another of the Top 100 included because of its inventiveness rather than its artistry, so to speak. The Modern Library board really likes certain books that sort of broke new ground in areas like noir, modernism, post-modernism, stream-of-consciousness, etc. While Winesburg is not a difficult read at all, there is some debate on whether or not it’s even a novel.

I’m comfortable stating that it’s not a novel, but rather a “short story cycle” surrounding one main character (George Willard, the local reporter) and his becoming a man in small town Ohio. All 22 short stories include Willard to varying degrees and some have nothing in the world to do with him, but merely mention him in passing.

Critics have noted that Winesburg is one of the earliest examples of modernist literature – focusing more on the inner thoughts of characters rather than straight prose. I’ll take their word for it but I do know it is written in a rather clever way – especially for 100 years ago.

Helpfully, Anderson begins the book with a sort of introduction in which he introduces us to an old George Willard reflecting back upon his life. We’re told that Willard, though quiet, has a quality about him that makes people – known and unknown to him – open up to him and tell him their stories. Willard calls these people “Grotesques” and Winesburg is the collection of their stories.

Most of the stories involve a sort of loneliness only found in small town America, circa 1915. A yearning to do more or to be somewhere more important permeates many of the characters. After the first 25 pages or so, I began to worry I’d hate the book because Anderson seemed to want to make an IMPORTANT POINT every few pages or so.

For example, an early story talks about how the local boys knew that the gnarled and ugly late season apples actually contain the sweetest juice, even though they are overlooked by the orchard pickers. In other words, “there are some really great people who may be outwardly ugly or somehow disfigured – give them a chance, man!” That really started to bug me; it reminding me of some of my pathetic attempts at writing fiction for a course in college.

Thankfully, I was wrong. Anderson deftly explores all sorts of social taboos in clever and subtle ways. Adultery, pre-marital sex, puberty, homosexuality, abortion, feeling trapped in marriage, atheism, religious zealotry – all these and more are touched upon through the “grotesques.” Heck, one could argue that pedophilia is broached in the story “Hands.” 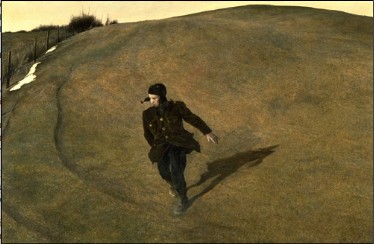 And so, Winesburg is not only “daring” in its structure, but also in its subject matter. A minister goes out of his head with lust. A farmer thinks he’s one of God’s chosen ones and tries to sacrifice his grandson. And more! But again, most of the stories explore varying kinds of loneliness and how the characters came to be so lonely and what they did to remedy the situation. That sounds pretty depressing, but it’s really not – in fact, I didn’t find myself the least bit depressed by Winesburg at all.

Perhaps because I know I’ll never be a berry picker in small town Ohio. Thank goodness.