Everyone is certainly familiar with John Lennon’s “Imagine,” but my page title pays homage to an equally talented lyricist: Nas. Nasty Nas and “If I Ruled the World,” as much of a hip-hop classic that exists. Imagine that. 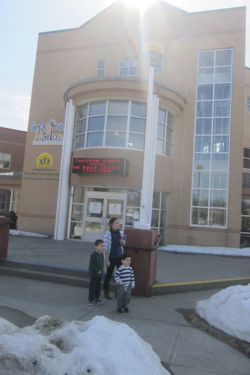 Yes, that’s right. I just compared Nas to John Lennon. Do you have a problem with that? Though special props must be given to Lennon’s “Imagine,” if only for the mild “questioning of it all” he puts out there in the first few lines. I have no trouble imagining there’s no heaven or hell, to use Lennon’s words, and my life is rich and full of wonder.

Take, for instance, the experience of taking my two sons to the Imagine Nation Children’s Museum. To watch them learn and interact and just experience new things is incredibly rewarding. Especially because it’s, y’know, it was real and tangible. 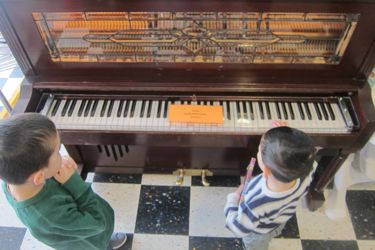 For my wife Hoang and I, children’s museums have always been sort of a measuring stick. Our older son Damian, now 8, has a rare syndrome that results in fairly significant developmental and intellectual delays – among other things. So there have been times at various Connecticut children’s museums when we have been confronted full force with his delays and difficulties.

Now with a little brother along for the CTMQ ride, it’s interesting to see how he enjoys these places in ways Damian never did. At the same time, Damian can now participate in some of the activities that his age-peers have long ago moved beyond. 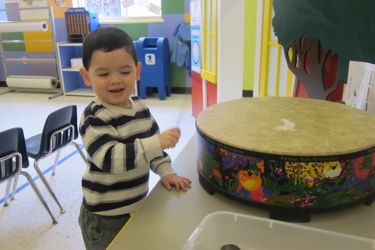 For us, that represents a massive victory. There is perhaps no greater joy in the world than when parents of special needs kids hit milestones – many years after what is typical.

In other words, the highs and lows we experience parenting Damian are much higher and much lower than parents who have no idea what it’s like dealing with his disabilities. And now, with Calvin almost three, the whole crazy parenting ride is completely new and different for us.

Which is pretty darn cool. 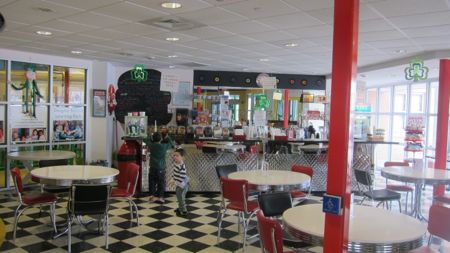 Upon arrival at Imagine Nation, those low lows were in full force as Damian wanted no part of the museum experience. The “lobby” area houses an olde timey soda shoppe type thing where one can buy ice cream and snacks and such. Damian was off having one of his typically atypical self-injury episodes while Calvin was fully engaged in a very typical “I want ice cream!” whine-fest. 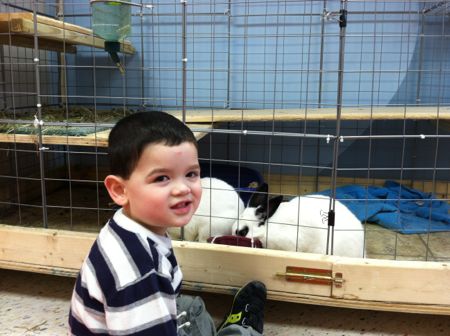 The best part was when Hoang told Calvin that they aren’t selling ice cream with two feet of snow on the ground outside… just as some guy bumbled by with a double scoop cone at his lips. Lying, as unintentional as it was, never goes over well a typical kid. (White lying to Damian still works pretty well. Score one for intellectually delayed parenting.) 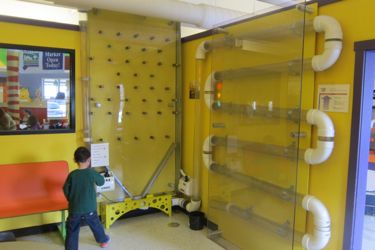 But lo, there is also one of those olde timey self-playing pianos in the soda shoppe area as well. Music and keys depressing on their own in a recognizable patter of ups and downs? Boom, both boys were equally fascinated and back in the fold.

In fact, for the next two hours there, Damian was pretty much perfect. Sure, he didn’t want to do a few things here and there, and wanted to do other things over and over forever, but that was fine. That’s just Damian. 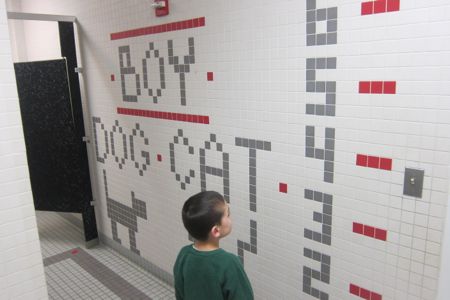 We paid and entered the three-floor “museum.” I put that in quotes, but perhaps shouldn’t. Kid City in Middletown is a true scare-quoted “museum,” whereas, say, The Children’s Museum in West Hartford is as true of a museum for children you’ll ever find. Imagine Nation is somewhere in between.

(A friend of mine with three little kids who lives in Bristol compared Imagine Nation to the Southeastern Connecticut Children’s Museum down in Niantic. That comparison is apt, as this place is definitely more geared for the younger set; say, 2-6 years old – though there are activities for older kids to be sure.) 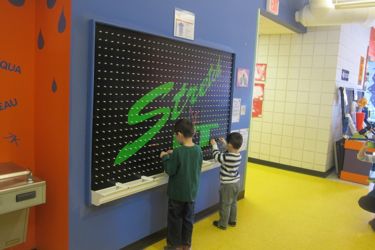 One reason I just wrote such a long exposition is because writing up the actual museum would sort of be silly. There are a ton of different activities scattered about, each exploring different areas like physics or human anatomy or weather or space or music or- you get the idea. There is nothing ground-breaking about Imagine Nation, but nothing really lacking either. 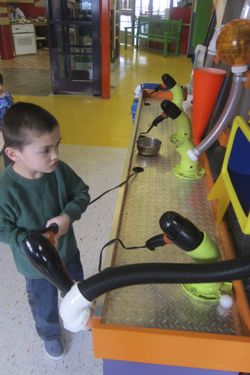 Well, other than actual staff I suppose. The place is run by the Boys and Girls Clubs of Bristol and even on a busy Saturday, is staffed by what appeared to be only 2 or 3 teens on their smartphones. it was clean and orderly, but a huge part of that falls onto the parents to keep everything going smoothly. Fortunately, the crowd during our visit was compliant, generally kind and definitely involved with their own childs’ well-being. 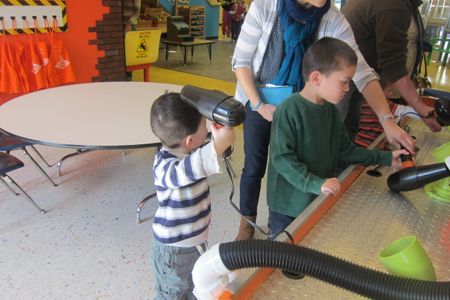 Calvin loved banging on the drums, checking out the toy dinosaurs and viewing the live animal tanks.

He also loved the treehouse slide. I think he loved it more than any other kid has ever loved it. The thing about this short video to watch out for is Hoang’s surprise at his appearance. Somehow, Calvin would enter the stairs behind a bunch of other kids but then appear almost immediately, ahead of the other kids, at the bottom of the slide.

Ok, I’ll admit, it’s Calvin’s balletic prance that kills me. Kills me dead. I can’t stop laughing at it.

Meanwhile, Damian found a room in which electric hot-air dryers were aligned to push balls from one place to another. As much as Calvin loved that slide, Damian loved this thing one-hundred times more. I think he could have – and would have – stayed in that room all day if we let him. 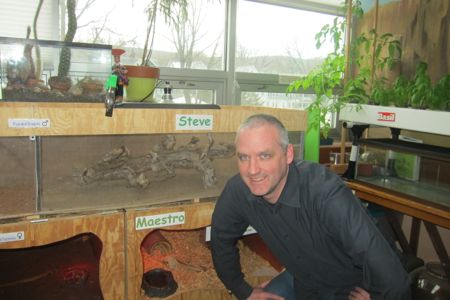 Rare photo of me!

The area of Imagine Nation that you have seen the most on their brochures and promotions is the ESPN-sponsored TV studio. Impressively, everything here was working! I think we’ve tried to use 3 or 4 other green screens at other kids’ museums and something is always broken or just not working correctly.

The only thing not working correctly here was my brain. Why I insisted on taking pictures of the monitor instead of just the boys at the SportsCenter desk is beyond me. ESPN was branded on a few other exhibits around its hometown Imagine Nation – as you’d almost hope, I guess. 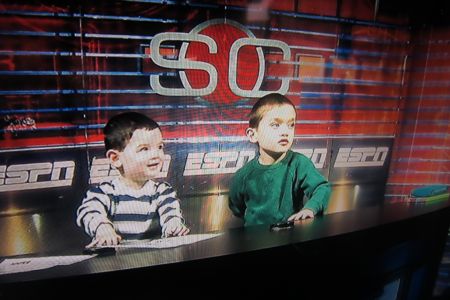 There were the sports/physics exhibits, right next to the health and body stuff we’ve come to expect. Kids didn’t seem to gravitate towards the hospital corner, which was a shame because there were some fairly interesting things to learn over there. 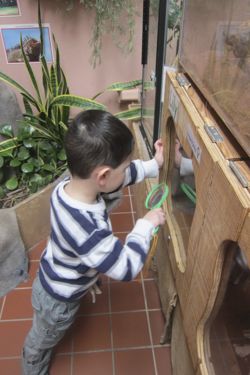 Across the large room was the deepest, darkest, most terrifying thing I’ve ever seen in a children’s museum: murderous dead-eyed dolls. 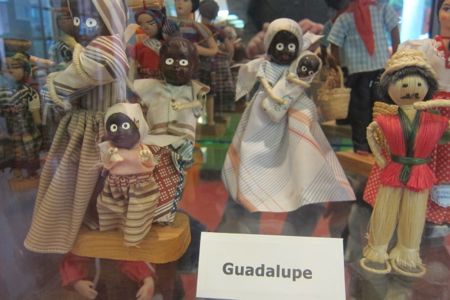 Sure, it was couched as a cultural exhibit showing different dolls from around the world. But we all know that the point was to match an evil little death angel with pretty much any kid of any ethnicity that walked through the door. Well played, Imagine Nation, well played. 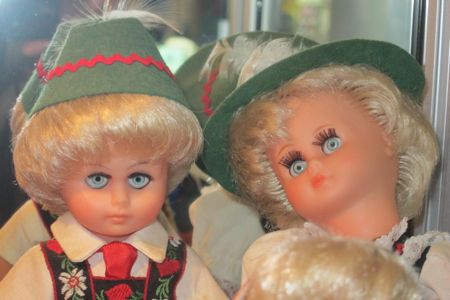 The third level is tiny. It contains a little space theater and, notably, a tire from a space shuttle. Yes, that’ right. Tucked away in a corner at the top of this museum is a tire from the Space Shuttle Columbia’s 11th flight in 1991. Here, look: 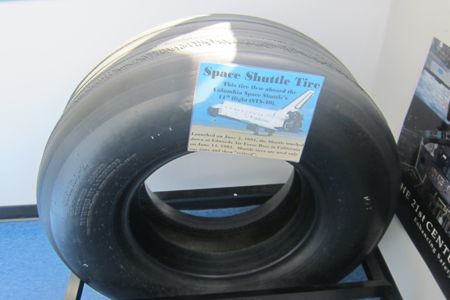 Back down to the ground floor for some more “imaginative play,” which is an area that Damian has simply never developed. It’s really cool to see Calvin direct conversations among his dolls or whatever. But Damian has his own way of doing things, and he had fun with the cash register and produce stand. 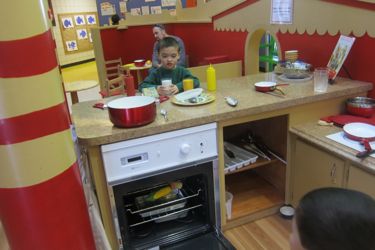 And he even moved on to the kitchen area to “cook” some delicious meals for us all.

Oh, there is a small outdoor area to the museum, but it wasn’t available to us due to the two feet of snow on the ground I mentioned earlier. It’s weird that this picture almost looks like there’s no snow though, right? 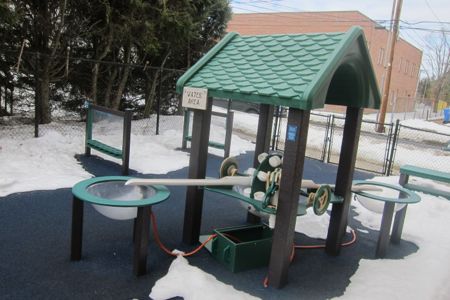 Like I said, we spent just under two hours here and probably could have stayed longer if we weren’t all so hungry for lunch and/or tired for naps.

This is a pretty cool little resource for kids and families in downtown Bristol – Imagine that. 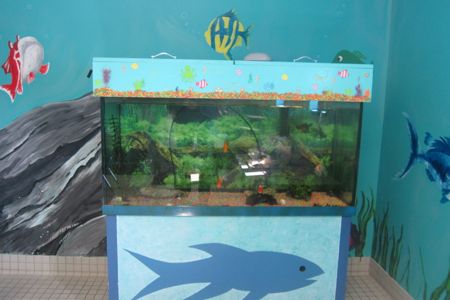 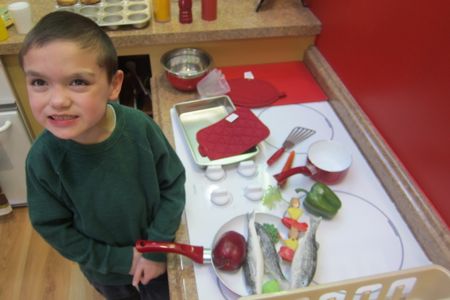 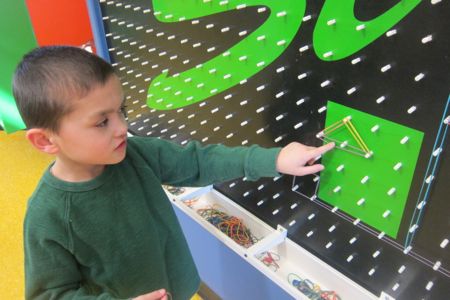 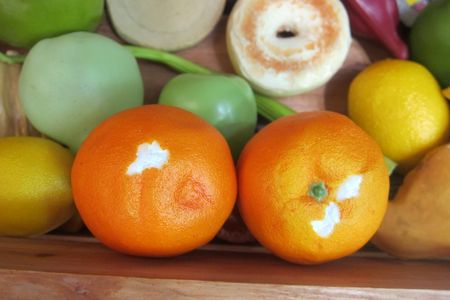 Psst. These are plastic.