How Sista Got Her Groove Back
Modern Library # 33
1900, Theodore Dreiser 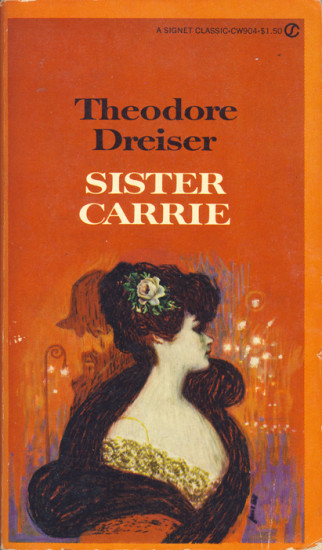 First, a mildly entertaining personal story about this book. Back in 2005, before our kids and other such grown-up nonsense, my wife Hoang and I used to go on fun little vacations. One such trip took us to South Beach. And yes, it surely qualified as a fun trip.

Anyway, I have this image of my beautiful wife from that trip, tanned Asian skin sunning on the beach… reading a novel written in 1900 called Sister Carrie. This is a fond memory, for it highlights another reason I love my wife. I mean, who read Sister Carrie whilst coming off a hangover on South Beach.

MY girl, that’s who.

So over time, I had built up this odd notion that Sister Carrie was some weighty tome that I wanted nothing to do with. I just figured the juxtaposition of reading a 115 year old novel and lying on the beach in a bikini was ‘too much” to handle, and the book became somewhat mythical to me.

On the surface, Sister Carrie is the story of a young girl’s adventure from a small town midwestern girl to her blossoming as a cosmopolitan high-society stage actress in New York and London. She suffers many trials and tribulations along the way, but despite them, she always had her eye on the prize, so to speak.

It helps that Carrie is really pretty, and rather intelligent. To her credit, she’s also a go-getter and is usually willing to put in some hard work. Her foray into Chicago finds her living with her sister and her family while working for a pittance at some horrible sweatshop. Meanwhile, she aroused the affection of Drouet, a wealthy(ish) traveling salesman.

She tries to stick out her crappy life, but succumbs to Drouet’s charms and ends up living in sin with him – on his dime. This is her first taste of the good life and of course she likes it. Drouet takes her to nice restaurants and introduces her to some of his “society” friends.

One of them is George Hurstwood, an older (and quite married) man of some stature. Carrie finds Hurstwood far more interesting than the self-absorbed Drouet and begins an affair with him. They carry on while Druout travels for business, sending furtive messages through messengers, which is pretty fun to read. That is, despite the slower medium, cheating and adultery hasn’t progressed much since the late 1800’s.

They eventually get caught, Hurstwood’s wife doesn’t mess around with his cheating butt, and kicks him to the curb. Carrie is ripped because she never knew Hurstwood was married, but he essentially kidnaps her after stealing $10,000 from his employer and then escape to Montreal.

Except he got caught, gave back most of the money and the two then escaped to New York City. I’ll skip most of the rest, but the lesson herein is, “don’t cheat on your wife and don’t steal and don’t lie to those who care about you.” 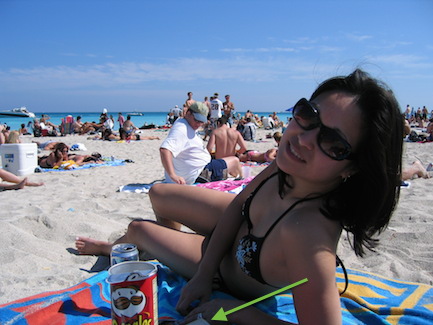 Over time, Hurstwood falls apart, Carrie misses being relatively wealthy, the two fall apart, Carrie pulls herself up by her own bootstraps and Hurstwood offs himself after a couple years of destitution, near-starvation, and an endless pathetic downward spiral.

That green arrow is pointing to Sister Carrie. On South Beach. I love this girl. I even zoomed in on it and compared it to the one in my hand 10 years later.

Carrie moves along without him, climbing ever higher heights of showbiz while her “husband” Hurstwood diminishes to penniless homelessness.

The amazing thing about this book is that Carrie is honestly portrayed. She doesn’t really scam or lie or cheat anyone, though she does get caught up in a bunch of chicanery. Her dalliances were on the up and up from her own perspective, and most times when she was challenged, she stood up for herself and did what she had to do.

I imagine this was pretty groundbreaking stuff when the book was written – and it was! Publishers were afraid of the book and Dreiser had some trouble getting it in print. And yet, here I am, 115 years later writing about it.

I guess he was right.