At some point in my life, I got it into my head that Faulkner was unreadable. I don’t know how that thought got there, for I don’t think I’ve ever read anything by him before and it’s not like I hang out with a bunch of anti-Faulkner misanthropes. But the thought was in there and I’m happy to have overcome it now that I’ve actually read one of his books. (He has two other, much longer, books on THE LIST.)

If you’re not familiar with this book, I’ll introduce you to its style by rewriting that first paragraph, As I Lay Dying style…

Faulkner is unreadable. He’s obtuse and verbose and impossible. I hate him. No I don’t. I actually think I like his stuff. Vardaman cracks me up. Why did I ever think this book would be terrible. It’s not terrible and yeah, I like it. Two more of his books on THE LIST? Longer, yeah, but I’ll get through them. Cause I kinda like this Faulkner guy. 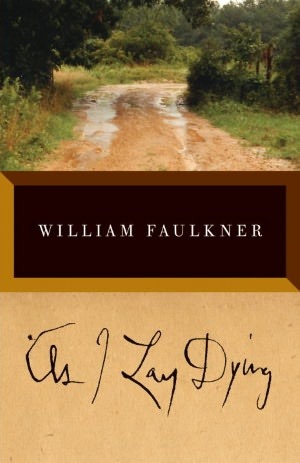 Note the difference? Well, you’re a genius. Yes, As I Lay Dying utilizes the oft-maligned, oft-confused, and oft-discarded stream of consciousness style. James Joyce, the truly awful Virginia Woolf and Faulkner are regarded as the top three practitioners of the style; be it because of their early and inventive adoption of it – or because they were actually the best with it. I don’t know.

I’ve read that Dying is Faulkner’s most accessible book and is the one that everyone should start with. Phew, I’m glad that’s the case then. (In fact, there is a handwritten note in the used copy I bought that says: For Spud: Christmas ’89 READ this – and may it encourage you to discover Faulkner, my favorite writer – Scoop.)

Sadly, the spine was never cracked and Spud surely never went on to become a Faulkner fan. Sorry, Scoop.

The book is the account of about 10 days of life in the destitute Bundren family in Mississippi. The matriarch, Addie, is dying as her family prepares for the inevitable. She dies and the family then travels a very difficult path to the town Anse (the patriarch) promised Addie he’s bury her in, as it is her family’s plot. Simple, right?

The story is told through the inner thoughts of the family (dead Addie, toothless – figuratively and literally – dad Anse, little kid Vardaman, bastard son Jewell, pregnant Dewey Dell, crazy Darl and Aspergery Cash), a few neighbors, the minister, and some people they meet along the way. Each chapter is named for the narrator of that chapter and Faulkner does a masterful job of shifting points of view, speaking styles and has aligned the inner thoughts of each character beautifully with said character.

It’s a neat trick to say the least.

Each character’s, um, character unfolds with each crisis. When the mother dies, each kid reacts very differently. All Cash cares about is the casket he obsessively hand-built. Jewell doesn’t care about anything but his horse that he secretly worked for and bought. Darl is crazy, but cares. And poor little Vardaman, who has the dubious (?) distinction of having the supposedly shortest – AND least understood chapter in literature; the famous/infamous “My mother is a fish.” 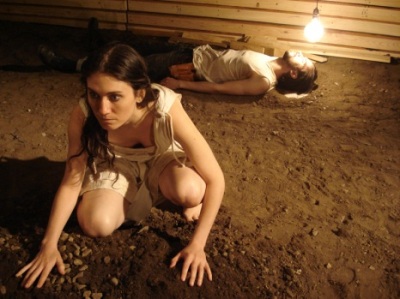 Put it this way – that’s all I knew about this book before I picked it up. I leafed through it and found it, boom: My mother is a fish. End chapter. People… it’s not a big mystery if you actually read the book. Vardaman is a confused little kid who doesn’t understand death and has no one in his family to help him through the trying time. Poor kid. (He had caught a big fish and killed it the morning his mama died and in his inner thoughts, he meshed the two events.)

These guys are poor; really, really poor. But Anse promised his wife, despite their loveless marriage, that he’s bury her in Jefferson. Logic be damned. On the way, they try to ford a flooded river which is a bad idea and their donkeys drown and Cash breaks a leg. Anse mortgages his farm equipment for a new team and they take the long way around to get to the burial site.

Cash’s leg become gangrenous, Darl burns down a barn, Jewell gets pissed at everything and Dewey Dell tries to buy an abortifacient through her hillbilly ignorance.

And oh yeah, the poor dead woman is rotting away in the Mississippi sun for 9 days and upsetting everyone who comes within 100 yards of it.

At one point, Addie says “words are just words.” (Addie, by the way, says a lot of very forthright and truthful little statements despite being dead for most of the book.) I took this sentence to really be the heart of As I Lay Dying. Yes, words are nice, but a person’s thoughts and actions speak to the true character of that person. Anse wanted to get to Jefferson for some new teeth. Dewey Dell to get an abortion. Cash only cared about his coffin. And so forth. Of course, we can’t know everyone’s innermost thoughts – but we can applaud Faulkner for painting them so wonderfully for us.

This family is amazing. They are crazy, ignorant, selfish and … and really pretty normal when you think about it. Someone in your family dies and it’s sad, yes, but what are you really thinking when you’re not in the receiving line at the funeral home. You’re probably not consumed with thoughts of love and sadness.

And neither were the Bundrens and for that, I thank Mr. Faulkner for this clever, funny, sad story.

Artwork: JJ Lind ©2012 Siobhan Towey as Dewey Dell Bundren; Max Dana as Cash Bundren., from some staging of it, 2012