CTMQ > Everything Else > Books, Movies, People, & Stories > ML39. Go Tell it on the Mountain

If this book is about redemption (which it’s not, really, but go with me here), then it is pretty cool that I’ve decided to squeeze it in to complete my roster of 2009 Top 100 books. 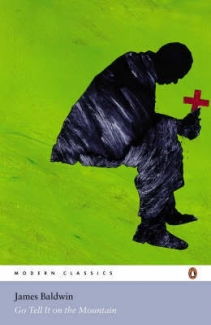 Yes, I finished it while Damian napped and Hoang shopped on a snowy December 31st. But moreover, this is yet another book I was to have read in high school but honestly don’t remember reading more than 5 pages. I decided I hated it then for some reason (probably because I didn’t like my teacher at the time) and have always pretended I had a rational dislike for the book.

I’m happy to report, all these years later, I don’t really hate the book. In fact, I think it’s really good. And even if it wasn’t, it prompted Hoang to speak like an early 20th century black evangelist when she read it last year and for that, it earns an extra point in my book. There’s just something about that girl looking heavenward shouting, “Laawwds!”

Go Tell It is a tough book. It was Baldwin’s first novel and it pulls no punches. It helps to have a Christian background to fully appreciate a lot of the imagery and the way the book mimics the bible in a lot of ways.

There is a lot of tragedy in the book, but each tragic moment is written as matter-of-factly as everything else. That’s life; lovers die in childbirth, bastards are born, men die in war.

The book is written in a slightly unique style; Baldwin jumps around from character to character, time-shifting all the while. It takes a little getting used to, but I grew to really like it. We meet the Grimes family, with the overbearing and violent father Gabriel and then delve into everyone’s past and how/why they came to be.

I particularly enjoyed the final “book,” wherein Gabriel’s son (but not really), John is “born again” and Gabriel, though he preaches fire and brimstone every day, doesn’t quite know how to react. Perhaps this is because he’s never had such a powerful conversion or the fact that he’s an abject sinner and his sister is not afraid to reveal his (rather serious) sins to the world.

Exploring the issues of racism of the early 20th century as well as family violence, the validity of religion and perhaps some veiled homosexual undertones, Go Tell It is way, way better than 10th grade me ever would believe.