An absolutely brilliant and beautiful Fall day in Connecticut. Grandmom and Granddad up from Delaware watching Damian back in West Hartford. Hoang and I take a leisurely drive west on Route 44 through some of the prettiest October scenery on the earth. We visit a bucolic vineyard and winery. We kiss. We hold hands. We rustle through the fallen leaves and listen to the gurgling mountain stream.

We go to Connecticut’s only designated Industrial Monument, Beckley Furnace. We are awesome. Just look at the joy on our faces in the pictures! (I’m happy to report that I visited again in 2017 with my sons and got some larger format pictures.) 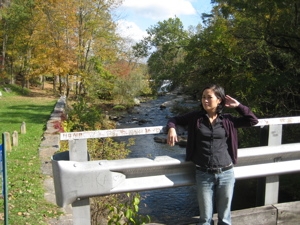 So… as the sign at the Furnace site asks, “What was this place?” 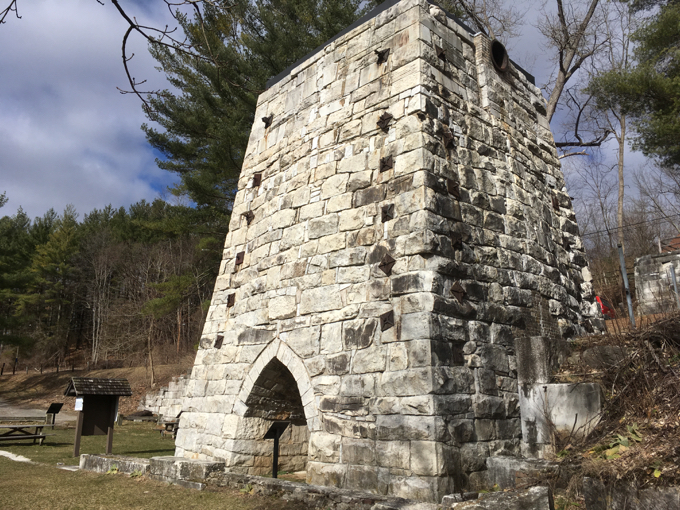 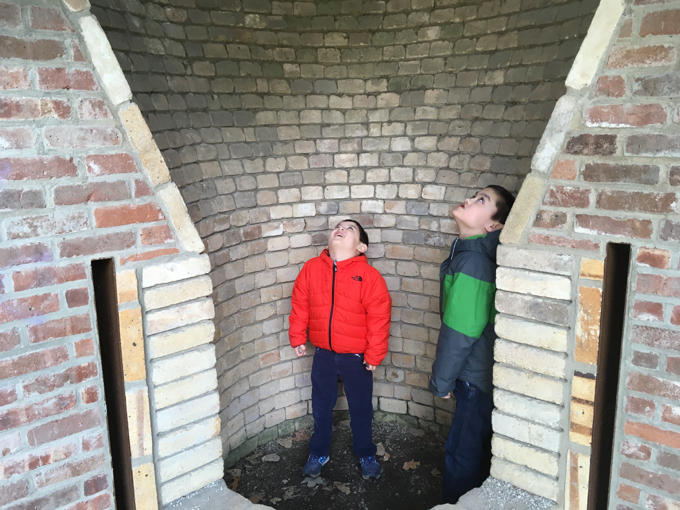 Now, if you’re like me, that made little to no sense. So let’s get some local history of this western area of the state. 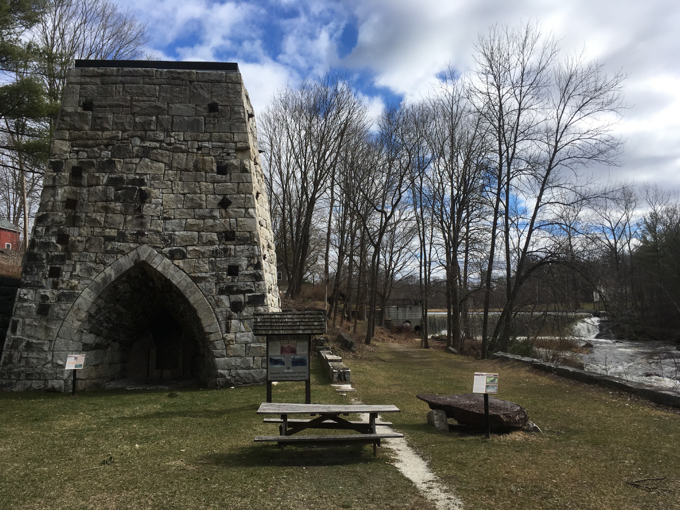 Iron Forges came early to the Blackberry River, with the first Catalan forge built in 1739 downstream from the Beckley site. A young man named Samuel Forbes (1729-1827 – wow!) developed the iron industry out here. Drawing on the high quality ore from nearby Salisbury, limestone from local quarries and charcoal made from the surrounding hardwood forests, the forges and furnaces of East Canaan were to play a major role in the development of the nation’s iron industry.

Forbes quickly became a leader in the industry, standardizing sizes for orders as far away as Philadelphia. During the Revolutionary War, Forbes made cannons for the effort at his Lakeville forge. Later, he developed machines to make nails and knives more efficiently and played a vital role in beating the British. His early foundations laid the groundwork for the booming 19th century iron industry in the area. 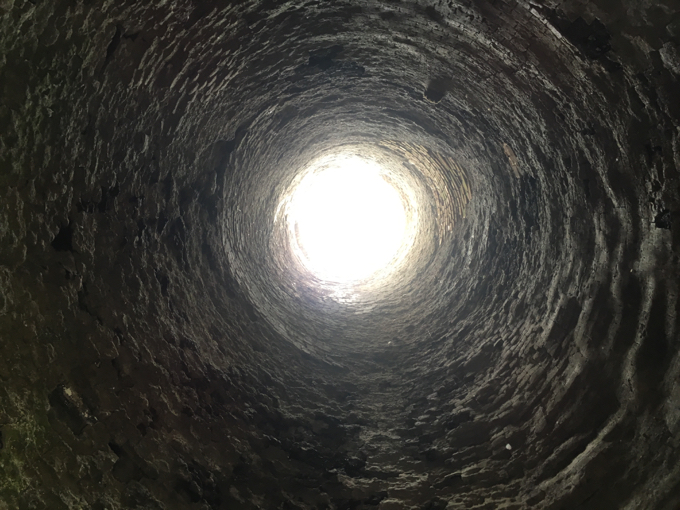 Enter Beckley Furnace. By the mid to late 19th century, this thing was in full operation (along with several others in the area). Here, using the dammed up Blackberry River to run air blasts, high quality iron ingots were produced and sent to nearby Lime Rock for processing into iron products. 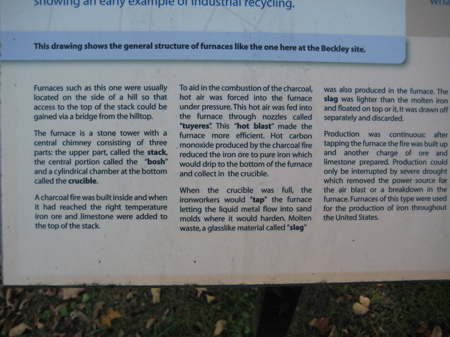 Want more details? The iron ore, charcoal and limestone were dumped into the top of the continuously operating furnace. Oxygen made the fire burn hotter, so heated air blasts were forced into the mixture through nozzles called tuyeres, located in the archways of the furnace. With intense heat, the iron was melted and drawn off through an opening in the casting (main) arch. This molten iron flowed into large forms molded in the earth, known as sows, and from there into smaller ingot sized forms known as pigs. By a separate operation, the impurities called slag, were drawn off and discarded. 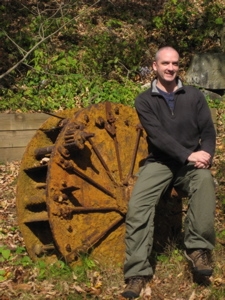 Massive slag piles can be found across the river, apparently. In 1920, the slag heap was estimated at 900,000 cubic yards! Much of it was crushed with cement to make slag concrete.

And by the way, the ingots got their name from the fact that the shape of the molds resembled piglets nursing on their mother. One particular use of the iron made here was railroad car wheels; those made from iron produced here were particularly resistant to cracking.

There are a ton more details regarding iron production; but I think we’ve had enough. I did want to mention one last bit I found interesting: Salamanders.

Salamanders are large chunks of solid iron that form inside the hearths of furnaces. These happened due to many reasons, never good ones. When they formed, it caused a costly shut down so that the hearth could be rebuilt and the iron chunk removed. 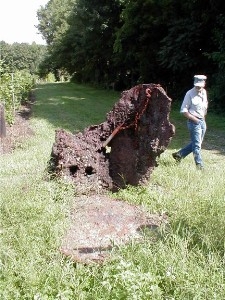 I found this picture of a nearby salamander. I actually drove past this in 2017 but didn’t stop… again, as you’ll read in 2 seconds.

At least 13 salamanders have been found in the Beckley area; notably there is a huge one across the road on the way out – but I neglected to take a picture. I remember thinking, “Hm, that’s neat. Wonder what that is?” and driving onward.

Now that we have a taste of old timey ironworks, what else can we do? Lots. There’s an “official” waterfall here. (CTMQ visit) The Beckley site has a little learning center that used to be the paymasters headquarters. They put on programs on Saturday mornings during the summer as well as Blackberry River walks from time to time. There are also several museums out there with much more on the former iron industry; these are mostly in Kent, Sharon and Salisbury. 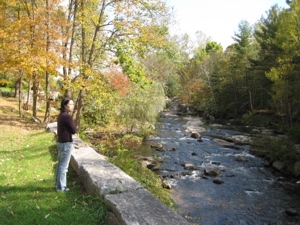 But that’s not all we have to look forward to! There is a program called the Iron Heritage Trail! This is a massive 58 site trail encompassing sites in NY and MA as well as our own Connecticut comprising over half the sites. Some sites are merely “former” sites, but I’ll figure it out as I complete it. The Beckley Furnace is the center/showpiece of the trail and comprises the entire first “Tour.” 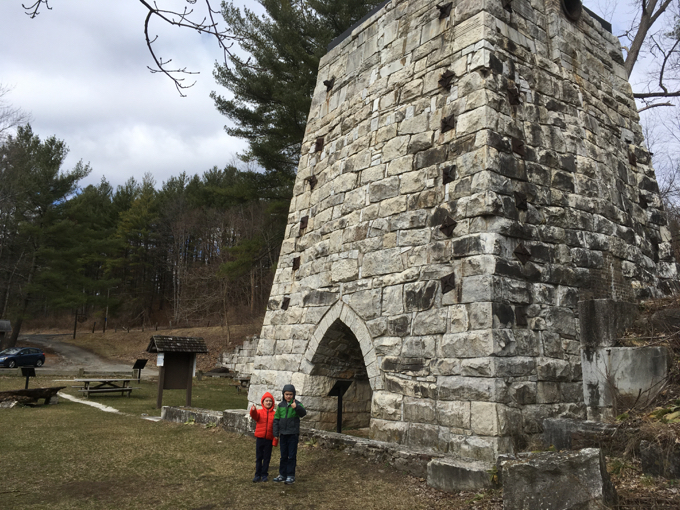 This trail’s web presence is confusing and lacking. Undaunted, I contacted the Salisbury (CT) Town Historian, Katherine Chilcoat, who sent me an excellent brochure and map of the trail. It is published by the Upper Housatonic Valley Heritage Area and appears to be a work in progress.

Between the Lakes seems to be be helping in developing the Trail and I found Limerock’s Trinity Episcopal Church has some association. Trinity Church is the oldest structure built by the iron industry that is still under the same ownership and still in use for its original purpose!

There are 9 separate tours; 5 of which are wholly in Connecticut and a sixth with has a couple New York stops we’ll be skipping. Check it out. 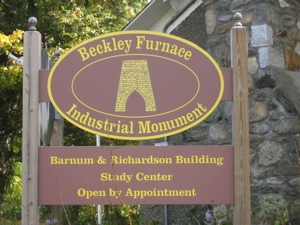 The Friends of Beckley Furnace