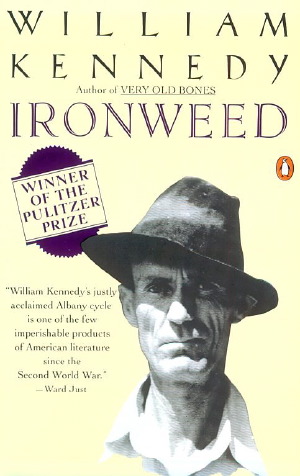 I am such a bum when it comes to acheiving my goal of reading 3 Modern Library Top 100 books per year. Not only am I a bum because I didn’t read any in the first two years of this project (whereas my wife is still on target to be at 12 by the end of 2005), but I’m an uber-bum because 4 of the 5 I have read could possibly be 4 of the 5 shortest on the entire list… But after the last book, The Death of the Heart, I thought I deserved a short, simple read. What’s worse, is I started this book many months ago, so I’ve forgotten many of the details, as this review will certainly reveal.

So, okay, I’m a bum. But I’m not a Francis Phelan kind of bum. Francis is a real bum – a transient dead broke alcoholic bum living day to day in Albany before, during, and after the Great Depression in the 1920’s and 30’s. And “Ironweed” is his strangely sad – yet uplifting story. A very well written one at that. 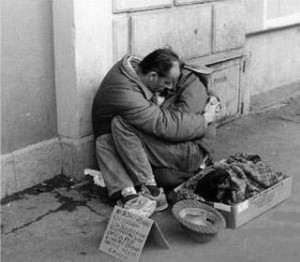 In his younger days, Francis was a promising major league baseball player; handsome, intelligent, strong, and married. His profession took its toll on his family relations, especially after he was assigned to a team up in Toronto, but it wasn’t until he became responsible for the deaths of two innocent people that his life fell apart. When his son was only 13 weeks old, he slipped from the diaper Francis was holding, fell on his head, and died. Later, after he had split from his wife and family simply because he couldn’t handle the death of his child, he took part in a union street riot and ended up throwing a rock at a union breaker’s head and killed him.

After getting away with that murder, Francis went underground, leaving town for years and never finding his footing again. He became, quite simply, a bum. A fugitive bum with a dark and troubled past. Now, in his later years and back in his old stomping grounds in Albany, Francis is confronted with the ghosts from his past. Compounding this heavy psychological guilt is his drinking. Though he seems to be a generally pleasant drunk, his addiction to booze continues to keep him from straightening his life out completely. Throw a terminally ill alcoholic homeless girlfriend, Helen, into the mix and you get the point.

Actually, no you don’t. Because “Ironweed” is not a completely depressing story. I liken the experience of reading it to that of drinking alcohol – in the end, it is a depressant but along the way there are some silly, some fun, and some enlightening times. Francis (despite what you’re thinking) is a kind hearted man. If he found himself with a few bucks or a sandwich, he’d always share his good fortune with whomever he was with. He never stole, he always worked for his daily bread, and he never forgot who was good to him along the way. Sadly, he only spent money on himself on rot-gut whiskey, though he never hesitated to get Helen a flophouse room, a bite to eat, or some booze of her own.

Throughout the story, Francis is confronted and haunted by visions of the people he’s hurt in his past. While reading, one gets the feeling Francis is really trying to reconcile his past but simply cannot do it. He’s constantly running away from his problems, but he’s very honest about doing so. A true tragic anti-hero.

Kennedy could have easily written Ironweed in a hackneyed and purely cliched way. Many others have… But he doesn’t. The dialogue among the bums is crisp and witty. The inner thoughts of Francis are never too high-minded or dopey. Kennedy’s ear for Depression era conversation is spot on and fun to read. Yet, his third person account is intelligent, unique, and thought provoking. For example, after Francis finds Helen’s lifeless prone body, Kennedy writes,

“…But he would continue to stare, mindful of the phonograph record propped against the pillow; and he would know the song she’d bought, or stole. It would be “Bye Bye Blackbird,” which she loved so much, and he would hear the women singing it softly as he stared at the fiercely glistening scars on Helen’s soul, fresh and livid scars whitening among the old, the soul already purging itself of all wounds of the world, flaming with the green fires of hope, but keeping their inegrity too as welts of insight into the deepest secrets of Satan.”

Writing like that, coupled with the back and forth jibber jabber of drunken hobos, makes for a great book. I’m also a fan of meaningful titles… In this case, ironweed is an actual weed with a very tall, resilient, tough stem topped with some small purple flowers. A 6th grader can discern the symbolism here – but that doesn’t make it any less powerful. In light of the fact that a normal reader could read this book in a weekend, I’d urge the normal reader to do so.