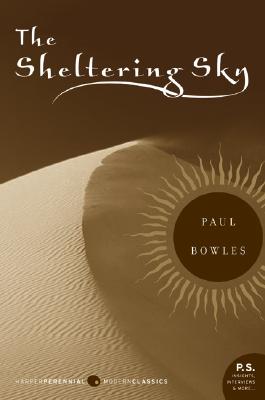 I feel sort of weird sitting down to write this review. Now I realize that when a board selects 100 top books out of the hundreds of thousands written over the course of one hundred years, they all should be nearly perfect. Of course, as I’m finding out, that’s hardly the case. But after finishing and very much enjoying The Sheltering Sky, ranked at only 97, I began to wonder what was wrong with me.

Then, upon realizing that my wife didn’t care for it so much, I turned to my favorite co-Top 100 reader/reviewer Ed Champion who writes reviews of these books that are so excellent they make me want to quit. Ed didn’t like it either! What is wrong with me?

(While I’m linking things, the original New York Times review by Tennessee Williams IS terrible. See for yourself.)

Ed felt he had been conned by the author’s early conceit that the main protagonists were “travelers” and not “tourists.” And the book depressed him. (among other issues). We’ve since corresponded about our differences of opinion, but since he’s a million times smarter than I am and is a professional writer, like I said, I feel kind of “wrong” about this one.

But I am a man of conviction and I’m sticking to my relatively high rating.

Taking place in post WWII northern Africa, The Sheltering Sky follows the exploits of the well-to-do married American couple Kit and Port Moresby who have some notion that descending into further pits of Moroccan and Sudanese hell will not only expose them to a great cultural experience, but will better them as people.

Not that that would be a bad thing. The two are married and profess love for each other, but they are hardly “in love.” Before long, it becomes clear that Port doesn’t take his wedding vows too seriously as he finds himself following some shadowy figure through the dark and mysterious alleyways of some city at 3 AM and winds up rugside with some young Arab lass. It’s unclear if he follows through with full-on adultery, but that’s hardly the point: he’s a scalawag.

But this being 1946 or so, Kit doesn’t seem to mind too much. Their traveling companion and “friend,” though, Tunner, cares. He cares enough to see his opening to get it on with Kit himself. Ah yes, yet another mid-century novel about ex-patriots in lust. (There is also another pair of traveling companions, an annoying and bombastic British pair who carry on like mother and son but who, supposedly, are actually lovers. The less said about these two caricatures the better.)

Although the story is character driven, it’s the atmosphere and the Sahara that steal the show. The oppressive heat and white-hot sun of the desert infects everyone’s lives so completely and so harshly, that it seems to really drive the story.

Ah yes, the story. Kit seems to hate each stop they make on their way eastward across north Africa. Most of this land (if not all of it) was French occupied at the time; Morocco, Algeria, Libya (wasn’t that Italian though?) and finally what is now Sudan – even though place-names aren’t explicity noted, they can be inferred. Each stop they make at remote desert outposts along the way is less civilized and each contains fewer sympathetic players to the Americans. 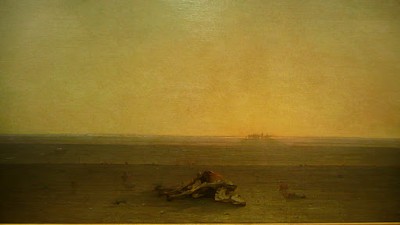 To me, the story reads like an adventure – a somewhat horrible adventure, not too unlike The Heart of Darkness (CTMQ’s review here). Bowles himself lived in the area for many years and was quite obviously familiar with the people and the land. Under the blazing hot sun, each character’s paranoia, anger, lust and sickness is magnified. In the Sahara, acts as simple as swallowing take on a slightly harrowing tone as here, when Kit is struck by the vastness of the desert:

”…The famous silence of the Sahara. She wondered if as the days went by each breath she took would sound as loud to her as it did now, if she would get used to the ridiculous noise her saliva made as she swallowed, and if she would have to swallow as often as she seemed to be doing at the moment, now that she was so conscious of it.”

The two plunge onward and Port turns inward. He’s sort of like a fictional Chris McCandless (from one of the best books I’ve ever read, the non-fictional Into the Wild, yearning for some unknown power that comes from integrating with the most unknown cultures and places on earth. In doing so, he alienates Kit further and drives her even deeper into depression and despair. So it’s not a “fun” adventure at all.

In fact, it’s quite terrible, as Port comes down with a bout of Typhoid and ultimately dies on the floor of some tiny French prison in some god-forsaken French outpost in Sudan or thereabouts. (And I haven’t even mentioned the sickly sunburned half-dead dogs or the maggot soup!) This leaves Kit on her own, searching for who-knows-what – she certainly doesn’t – out in the desert. The story takes a somewhat absurd turn at this point, as Kit is taken up by some Arab nomads, raped and then Stockholm Syndromed while posing as a young boy while being imprisoned as a willing sex-slave in a house occupied by her captor’s three wives.

So what does it all mean? I’m surprised that I don’t find many “Bowles was a racist” or “Bowles had white man’s guilt” reviews online. I don’t think he was any of these things at all, though I’m sure many do. Not that I know any, but I think his portrayals of desert nomads and hell-on-earth restaurateurs are probably quite accurate for the time.

I think Port was an egotistical idealist miscreant who was always searching for life’s meaning (whatever that means) and Kit was an anxious depressive along for the ride, forced to find her own way. I don’t think there’s much more to the story than their travels together deeper and deeper into the Sahara desert and what befell them along the way.

I love a good adventure tale and on the face of it, which is really all I’m capable of comprehending anyway, that’s what The Sheltering Sky is. I enjoyed this dark, somewhat disturbing novel. So there.

Artwork: The Sahara in a painting, Gustave Guillamet