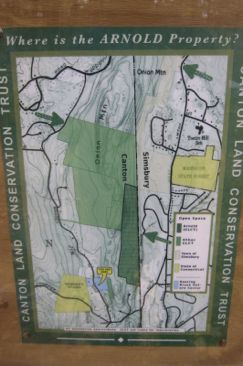 I’m going to publish this page more or less “as-is” simply to illustrate something. This past weekend (late October, 2013) I decided to go ahead and create new and separate pages for all the different types of Non-CFPA trails. I have pages for Land Trusts and Audubon Preserves and Nature Conservancy land – on and on. Just a bunch of lists. More lists.

Anyway, I had written my Canton Land Conservation Trust page and was eager to get a sub-page up under it – this one. Because I felt it was mildly funny and the trail was short and it allowed me to tell a bit about how my brain works.

As I was about to publish it, I peered a little closer at some of the information about the Arnold property and realized this trail does NOT touch it. No trails do. So not only is the owner/location somewhat confusing (as you’ll read if you keep reading this page for some reason), the whole thing is confusing.

So here it is – my page about hiking through a CLCT property that I did not hike through at all – this trail is simply part of the Roaring Brook Nature Center trail system, which you can read about in full here.

In case you’re new to me – and in that case, Hi! I’m Steve – I’m a bit wackadoo. At least in the sense of organization and lists. I’m sort of obessed with them and take great pride in the relative accuracy of the lists on this website.

[3-days later Steve notes the irony of the above.]

I even find it fun and relaxing to make a new list or to check through and/or update an old list. If you have a problem with that, send me an email. I’ll set you straight…

With a series of lists explaining how and why I’m fine.

Anyway, there I was across the road from the Roaring Brook Nature Center (CTMQ Visit Here), which is in Canton but is part of West Hartford’s Children’s Museum somehow, staring at this sign: 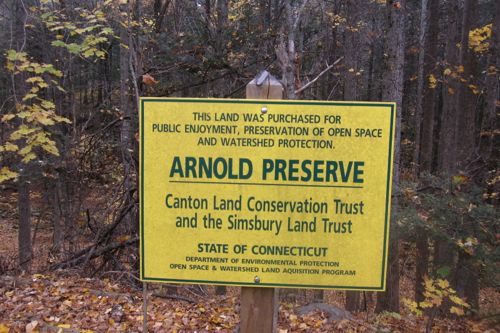 Sweat beaded on my brow. My heart began beating with rapidity. Canton AND Simsbury?! Whatever am I going to do on the website?

The entire trail lies in Canton. The kiosk at the trailhead was put there by the Canton folks. So this place is totally going to go into my Canton Land Conservation Trust section.

I hiked the orange-blazed loop trail in about 5 minutes. It goes down to a stream called Finnegan’s Brook, crosses it, climbs up the other side of the little hill, contours along it a bit, descends back to the brook and then back up to the kiosk area. I was somewhat interested in the maple sapling grove and wonder why deer haven’t eaten them all up. Here’s proof of that: 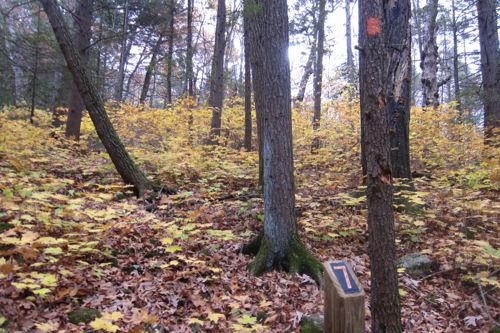 I should note that if you find yourself humping around this little loop, cross the street and hike around the nature center’s trails, as there is some really cool stuff over there like an old quarry and a nice babbling brook walk. 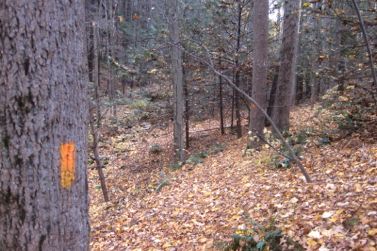 As I was saying, the trail took me back up to the conflicting sign. Even though I knew I was in Canton, something in my brain was bothering me. Having read through of all Simsbury’s literature, I was certain they reference the Arnold Tract somewhere. And at the same time, I was also certain the CLCT did not.

This haunted me all the way home.

Once there, I rushed in the door and started poking around. And I was right! Aha! But I didn’t want to be right – for that just left me confused again. I sat on it for a day.

Then I decided to get an answer. Is this 5-minute trail (though to be fair, it had numbered posts along the way that correspond to educational stuff in an unseen trail guide that surely makes the experience longer and richer) part of my CLCT or SLT section on CTMQ? 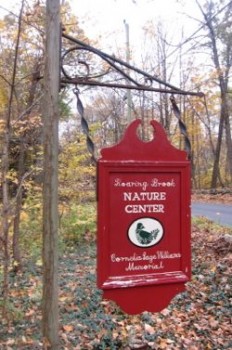 I wrote my friend Amy over at the SLT. And being the kind and understanding woman that she is, she didn’t question my sanity but rather just answrered my question:

Both — It is owned by the Canton Land Trust, but we have an easement on it, so we list it as well. We contributed to the purchase. So technically, both is correct.

If you need a definitive answer from us, i would put on CLCT page, and note that SLT holds an easement.

“The Arnold Property was acquired by the CLCT in 2005 from J. Herbert Arnold’s living trust. Funding was provided by the Open Space Fund of the State of Connecticut acting through… blah blah blah… The property lies on the eastern side of Onion Mountain and is bordered by steep terrain making access difficult. The land may be accessed through other land owned by the CLCT or through the town of Simsbury’s Onion Mountain Park. Due to the sensitive nature of its ecology, there are no hiking trails on the property.”

By the way, here’s my hike through Onion Mountain.
And here’s my page on the other Roaring Brook Nature Center trails.

And that, my friends, is how I was introduced to the Canton Land Conservation Trust trails. I’m going to go have a drink now.