This hike was part of a twofer. That’s right, I was putting my boys through the paces – first a few miles away at Shoddy Mill Preserve and now here at Blackledge Falls near Glastonbury’s border with Hebron. 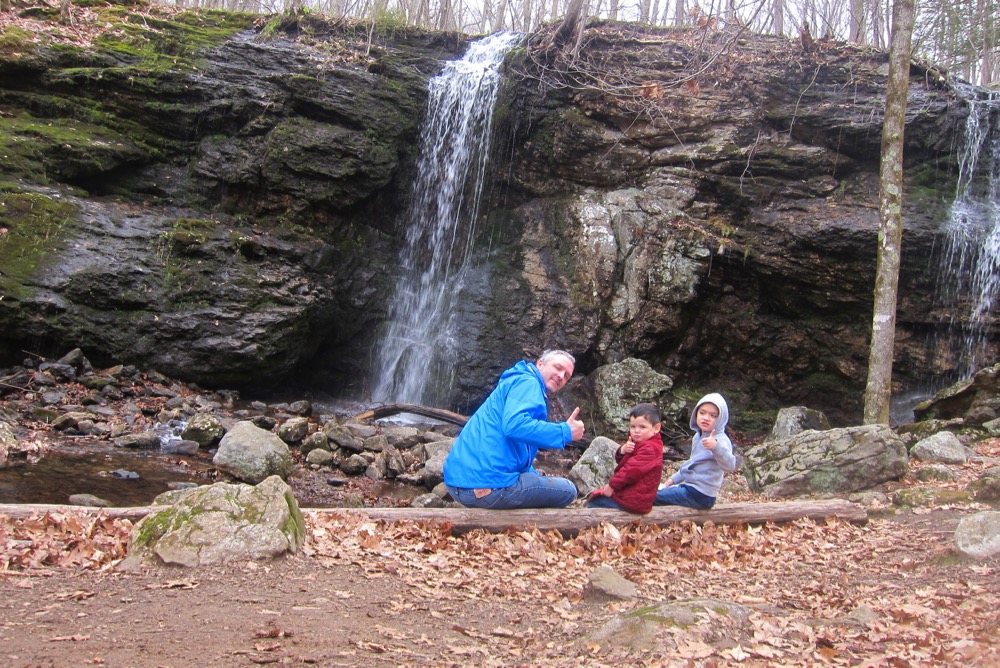 (On subsequent days, hearing my younger son Calvin say, “We went on TWO hikings!” to my wife was perhaps the cutest thing ever.)

Blackledge Falls is far more popular than Shoddy Mill, which we had had to ourselves 10 minutes earlier. Here, there were several other cars in the parking lot, but some were fishing elsewhere or mountain biking to Gay City State Park or Case Mountain north of where we were.

There are a few trails here, but even the unmarked ones are easy to follow and mapped (but don’t have bridges over the streams). We followed the main trail which crosses a few small streams via bridges and then heads up the hill to the falls themselves. According to the map, the vertical gain is just slightly over 100 feet, but to my little boys, it must have seemed like far more. 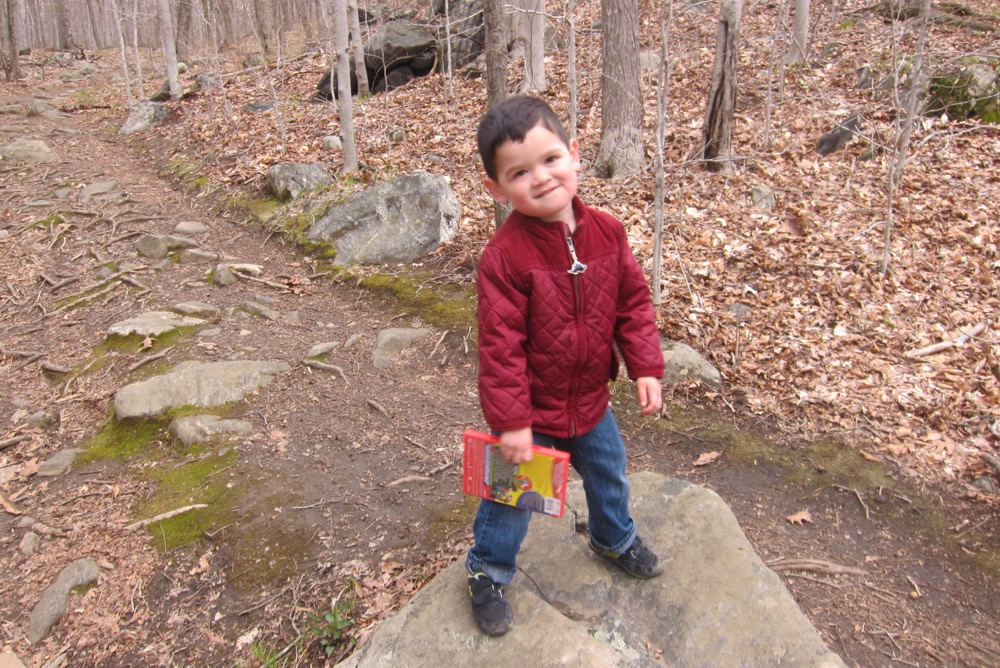 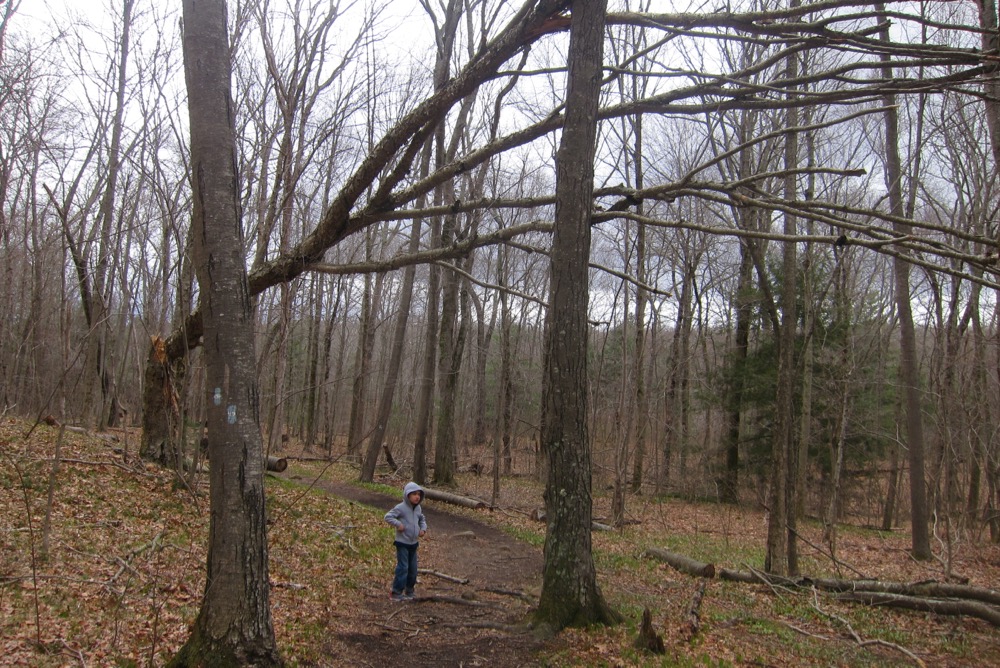 Calvin had fun posing on rocks all the way up, while Damian dragged himself slowly up the incline. I kept urging him on towards the top and the sound of the crashing waterfall. Calvin blurted a few, “C’mon D’s” along the way.

In the end, Damian made it all the way up all by himself. He never asked to be picked up – though he did suggest going back to the car a few times. Once near the top of the hill (I’ll call it John Tom Hill because that’s where the Shenipsit Trail passes just east of the falls – by the way, you can hike the Shenipsit from Portland all the way up to the Massachusetts line in Somers.

Once over a little crest, the falls reveal themselves. And wow, they are pretty darn cool. There are a couple trail options to get closer, but this is where my page title comes into play. I mean, anytime I can work in a TLC reference I will, but in this case, it is apropos. The trail down to the base is very steep. And when it’s wet, like it was during our visit, watch out. 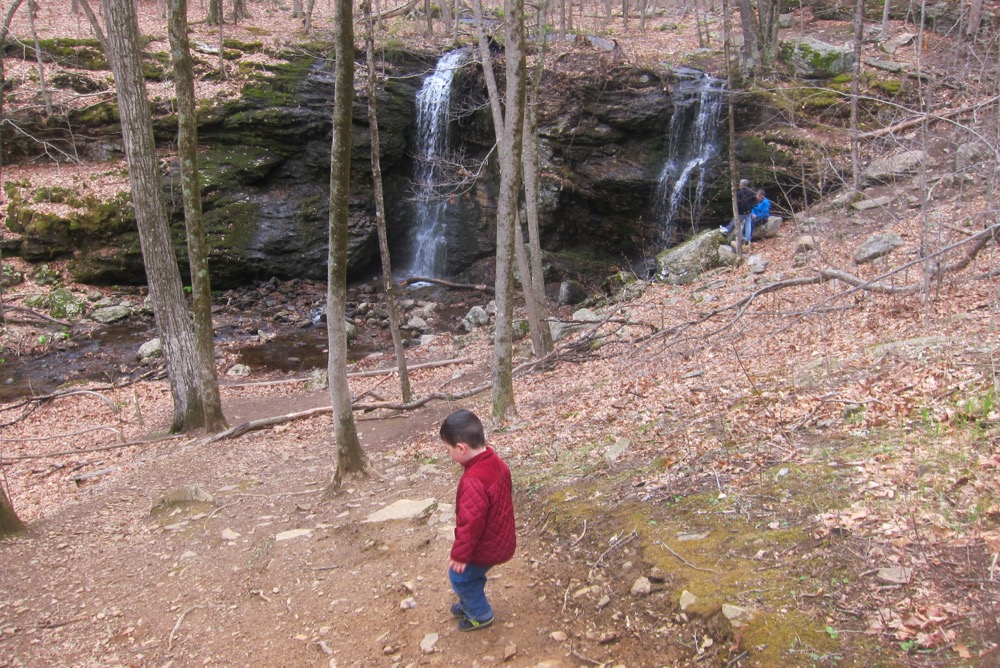 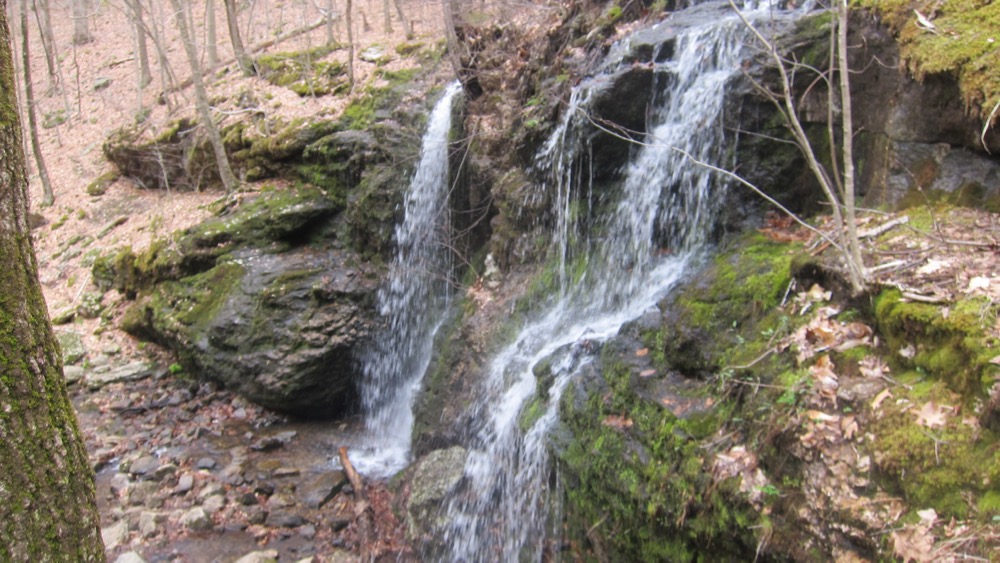 Of course, I’m writing as a father of a just-turned-3-year-old for whom “caution” and “careful” are foreign terms. He bounded down the descent and I watched him wondering at which point he would fall.

Riiiiiiiight… Aboooouuuuuut…. There. Oh well, he was fine. 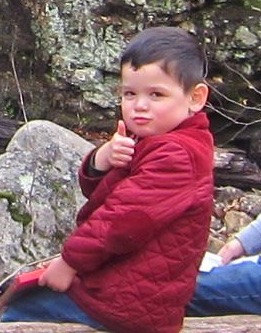 I was back up at the top with Damian who, to his immense credit, insisted, “I got it!” He gingerly made his way down slowly and carefully. At one point, he did reach out for help, but I was very proud of him. This is a kid who still doesn’t walk down stairs like you and I do – he stops at each step with both feet next to each other, and always holds a handrail. Go Damian!

From what I’ve gathered online, Blackledge Falls can be rather unimpressive. It slows to a trickle in mid-summer, which must be a bit of a bummer. Even after a decent rain and tons of snowpack, let’s be honest, the actual flow here is still pretty weak. 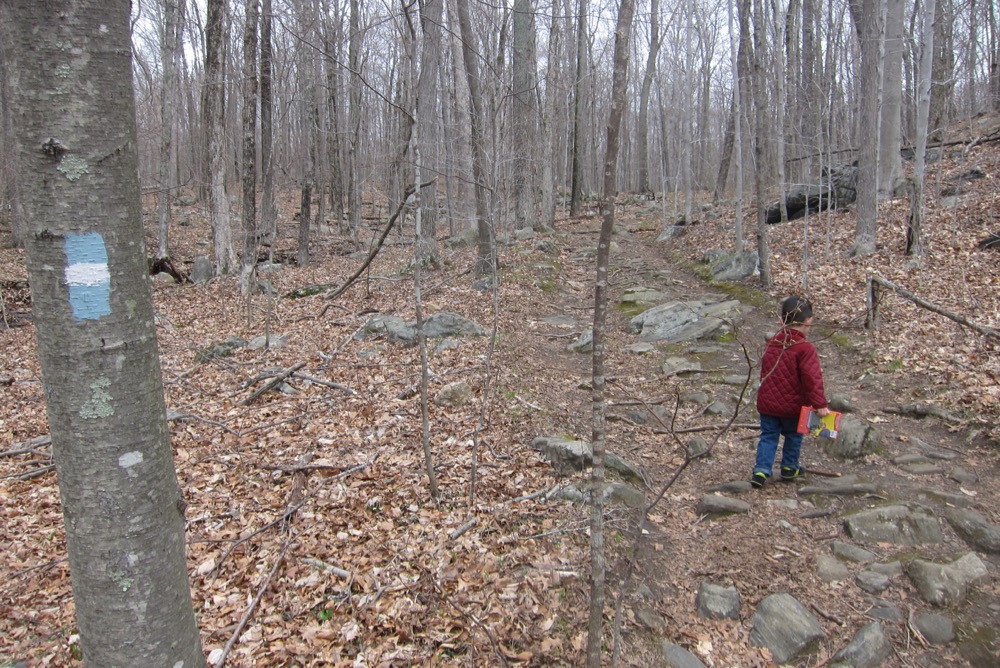 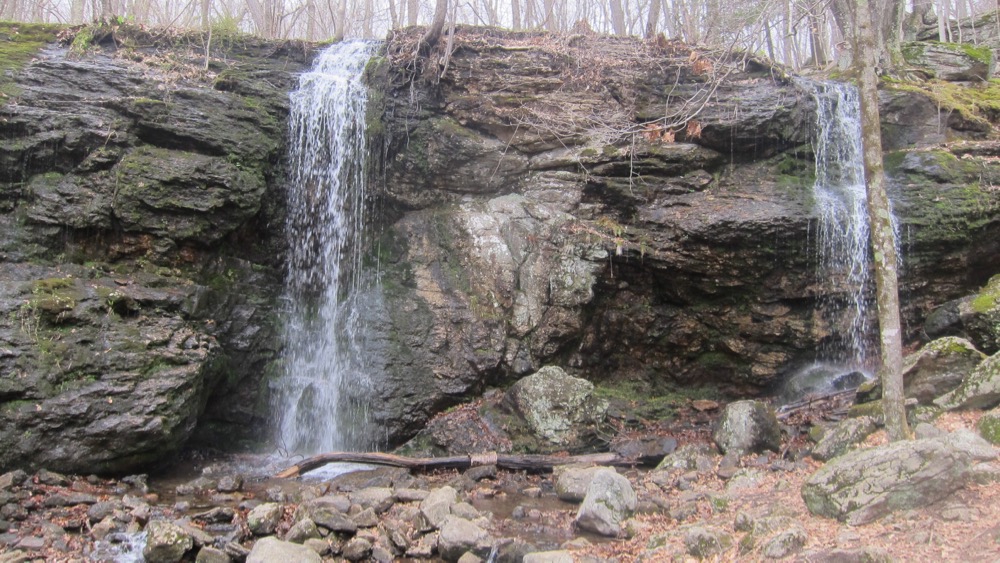 But they are still cool and definitely worth the half-mile or so walk to them. As you can see yourselves, the black basalt (?) cliff ledge gives the falls their name. Sure-footed dads can easily climb to the top of the falls, but as I’ve found time and time again, the views from the tops of waterfalls are almost always dumb.

That kid is too much. We had to trudge back up the steep hill, but both boys did great and with a hand-hold from papa, they both made it up on their own. 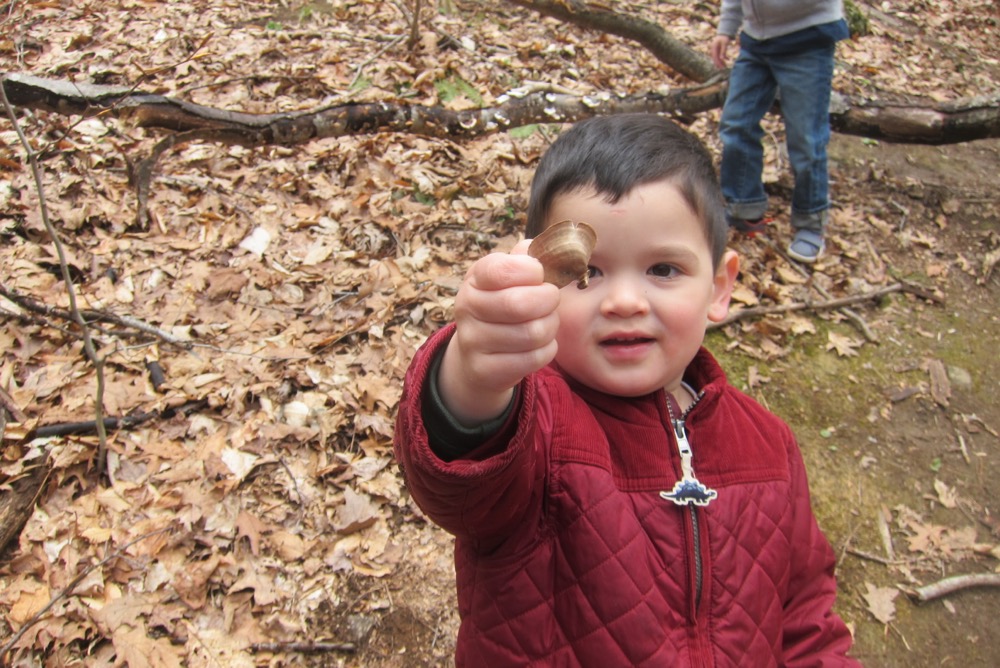 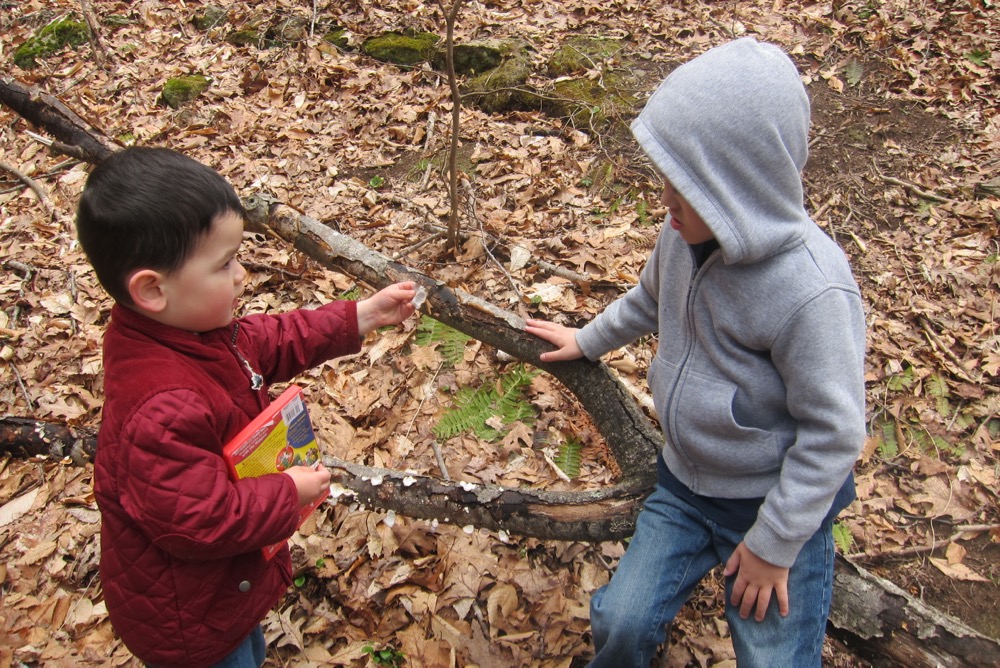 Calvin claimed to have wanted to hike around the whole property, but Damian insisted on heading straight back to the car. I compromised with both and agreed that we’d take in the pond on the way back. From the town’s website:

The pond includes a dam that was formerly the site of an up-down saw mill which was moved to Old Sturbridge Village in Sturbridge, MA. There it forms part of a living history museum that allows thousands of visitors each year to experience New England life as it was in centuries gone by.

Early in the 20th century, the Blackledge Falls property was used by the Cheney family of Manchester, and later by the Danskin family of Glastonbury, as a summer retreat. Two log cabins used to grace the site near the pond.

That’s pretty cool. Not as cool as fun little hikes with my sons or TLC references, but cool nonetheless. 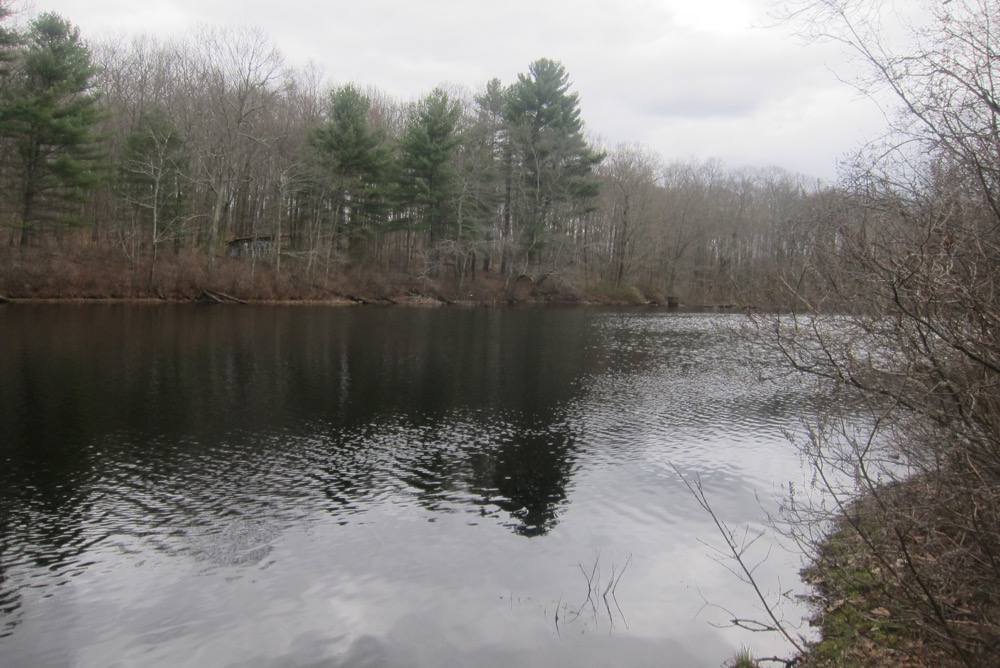 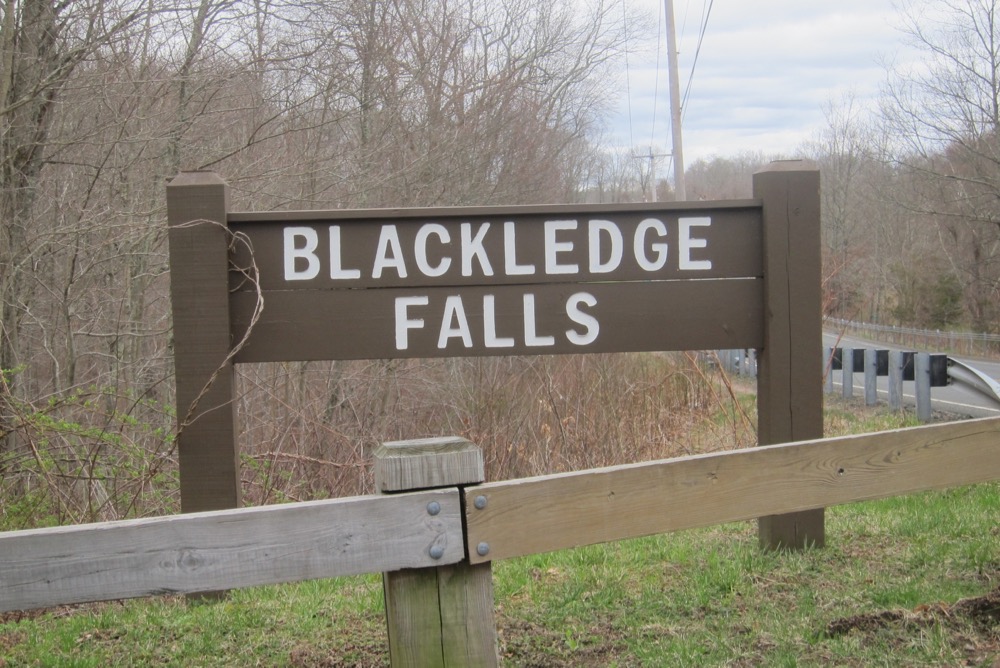