True story: Stewart O’Nan’s Last Night at the Lobster is the first book in my life that I sought out, procured, read one page, and thought, “Hey, I’ve read this before!” And I had, back in 2007 when it was published. It greatly bothers me that I’d forgotten. 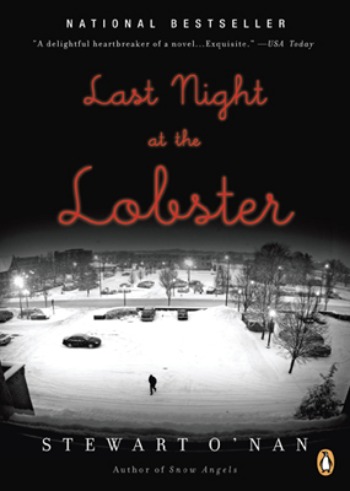 (I took some solace in the fact that, after reading the first paragraph on page one I was able to recall the general gist of the next 145 pages.)

The book was recommended to me by a Hartford Courant reporter. I was discussing New Britain and its unique charms with her and she said that I should read O’Nan’s book. I said, “okay,” and got it at the library a few days later. Then the first paragraph of this page happened.

Then I re-read the book.

Lest you think I’m some “Local Fiction Reading Superhero,” I must say that this book is very short, and reads very quickly. But, it’s also very good.

I would never have read Last Night at the Lobster if it didn’t take place at an truthy-fictional amalgamation of Westfarms Mall, a crappy mall like, say, East Brook Mall in Willimantic, and downtown New Britain. O’Nan knows beat-down Connecticut well, and was living in Avon when he wrote this (and many other) book(s). He doesn’t dump on New Britain or Bristol at all; he describes the towns as they are.

(And, I’d be remiss if the book didn’t make an accurate dig at the Simsbury/Avon/West Hartford – my hometown – yoga panted mom brigade as well.)

But more importantly he has genuine affection for the tireless low-wage earners who work in Red Lobsters and the medium wage diners who eat there. O’Nan captures the quiet, depressing, gray malaise of a snowy December day in Connecticut perfectly. The weather, the sad mall, the broiled tilapia… all of it combines to play a gloomy dirge for the closing chain restaurant.

The book follows the day of Manny, the Lobster’s devoted manager. From his morning arrival to shutting down the joint one final time. Manny’s ex-girlfriend, whom he still pines for, is a waitress there. He employs druggies and single-moms and ne’er-do-wells. And he loves them all… but not as much as he loves his Red Lobster.

He caresses the worn marlin above the entrance. He has feelings for the doddering lobsters in the live tank. He treats imbecilic customers with kindness – even though the restaurant would be closed forever tomorrow. His devotion to his job is somewhat pathological and is the only thing that detracts from the book. He cares that two old ladies steal sugar. He cares that the bus full of intestinally ill Chinese people have a pleasant vomit and diarrhea experience in clean bathrooms. He is sure to replace a bulb at a booth that won’t be used during a blizzard. On and on.

And he wonders why the women in his life never seem to fully invest in him?

Even so, Night at the Lobster is an excellent book. While we never get involved in the characters or really care about their fates, O’Nan draws us into the world of a closing chain restaurant in a crappy mall on a crappy day in central Connecticut. And somehow makes that setting rich and funny and interesting.

Moreover, pretty much nothing happens in the book. It describes a day at a Red Lobster. Yet, despite all of this, O’Nan is such a talented writer that we, the readers, do get drawn into the story, such as it is, somehow. And that, by my reckoning, is the mark of a truly gifted writer.

I always sort of wished I met O’Nan when he lived “over the mountain” from me in Avon. (He’s since moved to Pittsburgh.) If only to shake his hand and congratulate him on getting the term, “Hard Hittin’ New Britain” published in a nationally released book.

I enjoyed this NYT review