These falls (cascades, officially) are included in the new (2013) Connecticut Waterfalls guidebook, so I’m adding this page two years after visiting. And since I’m lazy, I’m not going to go find the CD that contains the original pictures to give you the lovely giant waterfall picture you so richly deserve. Since I didn’t know this cascade would make a guidebook in the future, I didn’t spend any time taking proper pictures, so this is all I’ve got. Truthfully, I’m a bit annoyed at myself for this oversight, as this is a beautiful area. 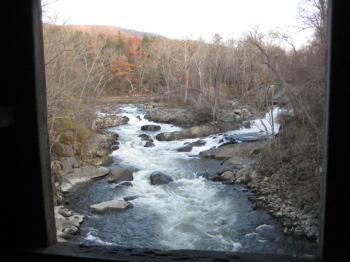 I distinctly remember the time I saw these cascades when these pictures were taken. I was overnighting on the nearby Appalachian Trail and had a fairly sleepless night. I had left my car at Bull’s Bridge near dusk, hiked south to the Ten Mile River shelter, spent the night, awoke at dawn, hiked south to the New York border in Sherman, then returned north up the AT along the Housatonic to Bull’s Bridge.

In the brisk morning light I bumbled down the rocks towards the cascades and took a terrible picture of myself with my flip-phone and sent it to my wife captioned, “So beautiful! Wish you were here!” Cold, exhausted and with half a day’s hard hiking ahead of me, the scene here still prompted that text message. It’s a powerful place.

In more ways than one. Aesthetically and physically. The rapids here are no joke and could really bang up a novice kayaker. (I saw none that mid-November morn, perhaps because it was below freezing.) Some of the rapids here are named “Stairway to Hell,” “The Flume,” and “The Pencil-Sharpener.”

Though impressive, the rapids and flow here are all greatly muted by a sluiceway that diverts most of the river for use at a hyrdo-electric plant downriver. As a result, the rapids can be quite benign most of the year. 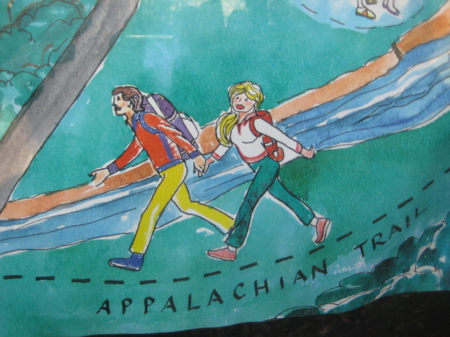 The fun AT map at the bridge

There is a nice little parking lot on the west side of the covered bridge with a map kiosk. (There is a much newer and larger lot on the other side of the river.) From the kiosk, you can hike a short ways to get some better views of the cascades, and I recommend doing so. This trail connects to the AT, but my Completist OCD didn’t allow me to cut that tiny corner of my AT hike, so I didn’t really go that far down the trail.

Rather, I went down into the river and poked around the cool potholes and smoothed out flumes in the river. Good enough.

South of the bridge is another short trail leading to a platform overlook. Here, you can see “The Flume,” which is really just a skinny channel in the river that only drops a few feet over the course of 40 feet of riverbed. It still looks cool though.

Because I’m me, I just poked around this page about the history of the various dams and hyrdo electric plants in this area. It’s actually rather amazing if you’re into this early engineering stuff. As I understand it, the canal that begins here in Bull’s Bridge goes 2 miles downstream to Gaylordsville (New Milford) and powers the Rocky River plant… A plant which has its own CTMQ page because it’s a rather important “first” in America.

And you thought you were going here just for the bridge – a rather ugly covered bridge, by the way. 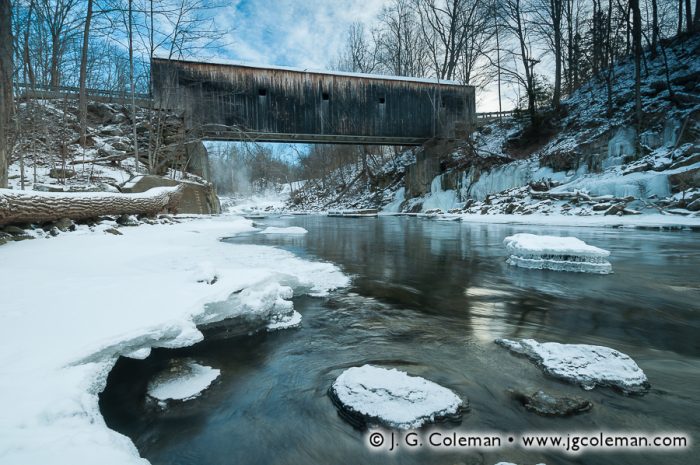 Bull’s Bridge from the “cascades” by my friend Justin Coleman.