[Note: For my Waterfalls pages, I’m using the town designation used by the Connecticut Waterfalls 2013 guidebook. Because sometimes it’s fun. But not now, as Burlington is just Burlington.]

I don’t take pleasure in breaking the law. I’ve very rarely done so in my life and when I have, I’m talking about silly stuff like getting to these falls. To do so, I parked in a No Parking Tow Zone and then trespassed on New Britain Water Department/town of Burlington land. 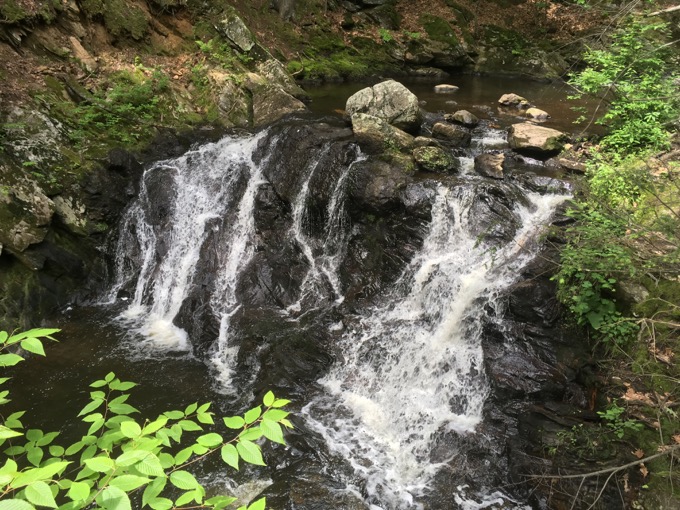 The area is covered in no parking and no trespassing signs. So if you were somehow to get busted here, you can’t play dumb.

And yet… it’s all sort of silly. There is plenty of legal parking nearby for a CFPA Tunxis Trail. The trail to the falls is well worn and frequently used. There’s even a trashcan – full of fresh trash – at the quite noticeable trailhead. 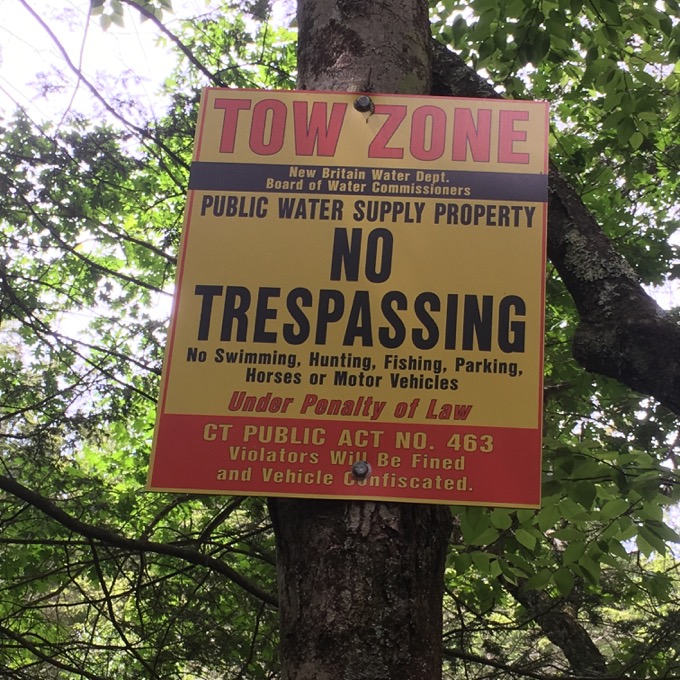 The issue here is that Burlington doesn’t want anyone swimming here. Or jumping off of rocks. So whether the issue is fouling a municipal water source or safety concerns, the issue isn’t people like me walking the 40-feet to take some pictures of a little waterfall and the pretty little gorge in which its located.

There is confusion over the name of the falls. The best I can figure, the lower falls – the ones with all the No Trespassing signage (and the better of the two) is … I’m actually still not sure. New England Waterfalls says the lower, better, no trespassing falls are Burlington Falls and the upper, lesser, harder but legaller to view falls are Bunnell’s Falls. 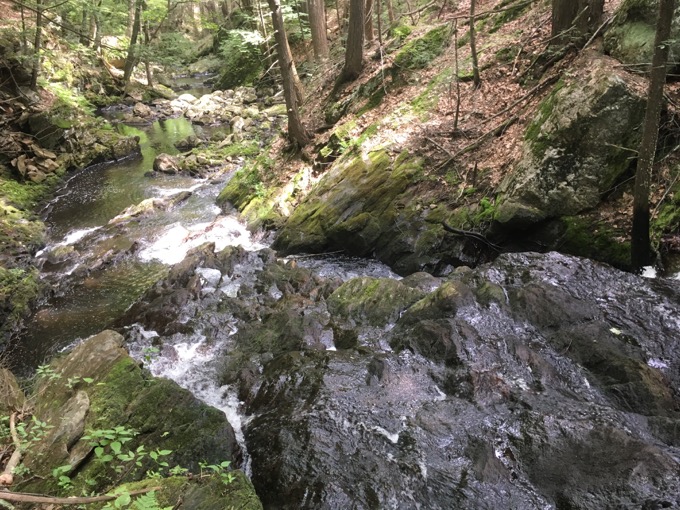 The falls are two-tiered, and both sections are horsetails of almost equal height. The gorge and exposed bedrock are striking, especially when encrusted in a little ice as several of my photographs show. There is a nice gap between the two falls which adds a nice touch.

There is another waterfall, commonly referred to as Bunnell’s Falls, located about 0.2 mile back up Hotchkiss Rd… These particular falls are very much obscured by plant growth and trees along the brook, and there is no real safe way to descend down to the brook for a better view. 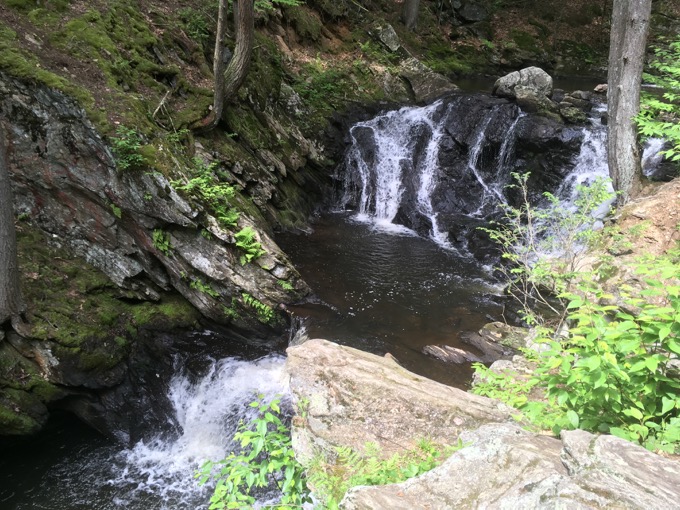 Unsatisfied, I turned to my friend, photographer Justin Coleman. He adds more flavor to his description, and I see no reason to add to it.

Bunnell Brook crashes over a waterfall in the distance, roiling itself into a whitewater frenzy and charging forth through the verdant woodlands in the hills of Burlington.

Many of Connecticut’s waterfalls were named long ago when they were at the heart of streamside mills driven by waterwheels or turbines. Some folks may have appreciated the natural beauty back then, but most probably knew them as busy places of industry where goods were churned out and livings were made. And in some cases, once those mills vanished and the waterfalls ceased to be places where livelihoods were earned, the names and stories behind each could become quite jumbled and obscure in just a generation or two. 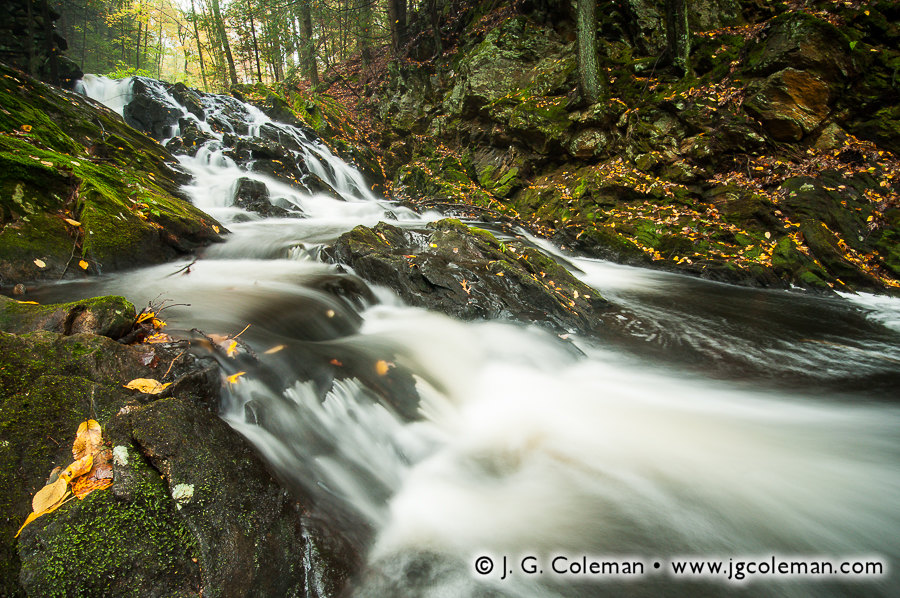 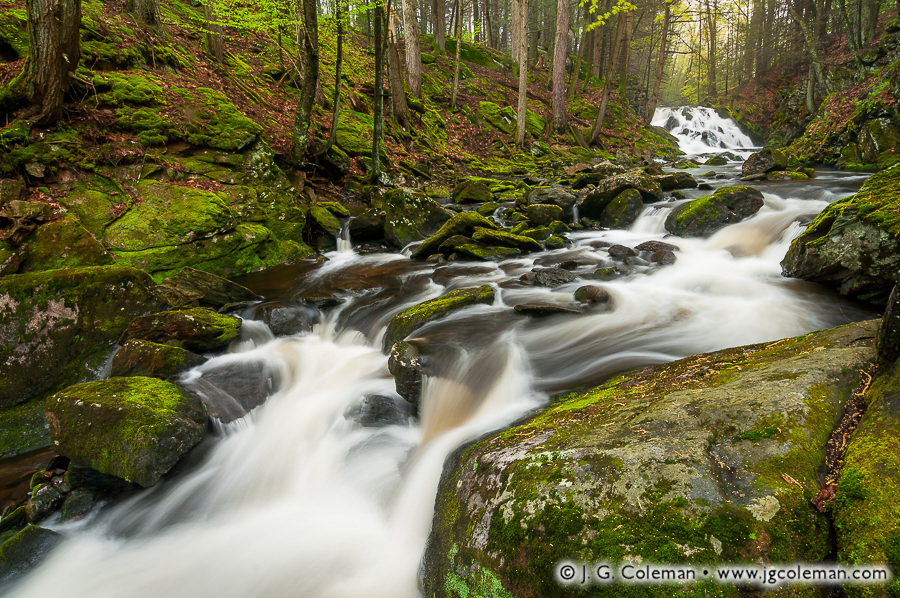 Justin’s other picture. Check out his stuff, it’s great.

Take the case of Bunnell Brook in Burlington, where there are two distinct waterfalls found about 600 feet apart. We know that one of the two waterfalls was historically called “Bunnell’s Falls”, but which one? An 1895 publication suggests it was the lower falls, though more recent publications tend to apply that name to the upper falls. I don’t know who’s right, but in the meantime, I’ll just stick to Upper and Lower Burlington Falls. 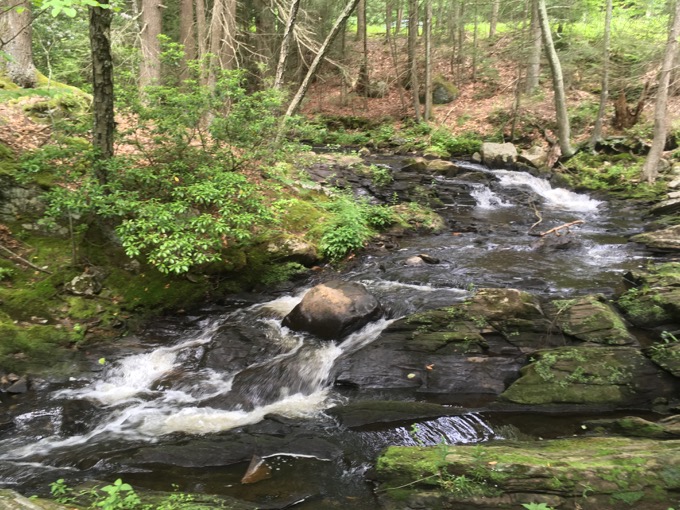 Hey, Burlington – make it official already! People like Justin, and the waterfall writers, and myself can’t handle gray areas like this.

No one has mentiond that Bunnell Brook runs alongside Hotchkiss Road, so it’s not like these are totally remote falls. But that’s the thing – once there, especially if you descend into the gorge, it sure feels like you’re far, far away from anywhere. 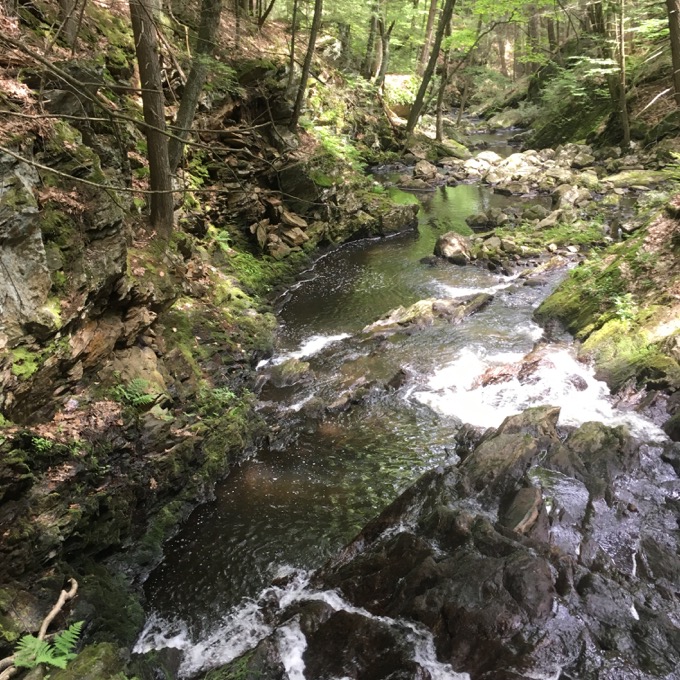