People probably incorrectly think there aren’t good areas to hike within the town of Bloomfield. They often don’t realize that a good chunk of the Metacomet Ridge is within the town’s western border. And yet, today, I’m writing a whole page dedicated to a tiny little (mostly) urban park, a few miles east of the hills. 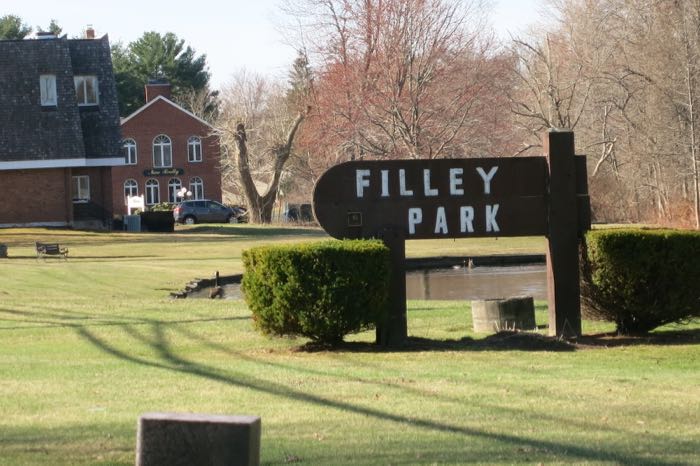 I’m doing this for three reasons:

1. Because Bloomfield is completely re-doing Filley Park. A project proposed in 2008 was about halfway done in 2018! It’ll be cool to see those changes when complete.

2. Those proposed changes include an improved trail system, with a connection to the “Brewer Drive Area.” This is quite interesting to me, as I’ll discuss below.

3. There’s a cute video of Calvin that has never been seen before. I like cute videos of my son when he was younger. 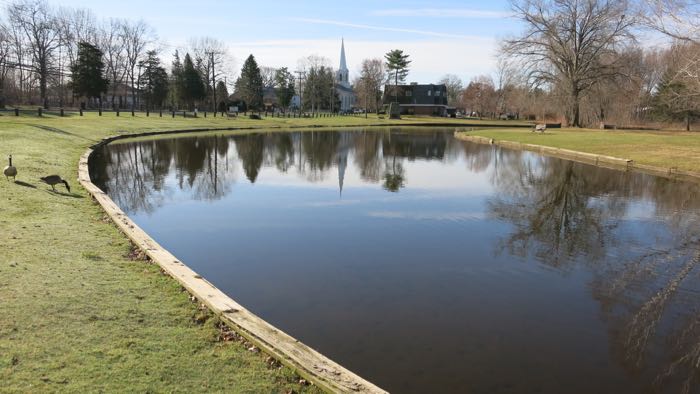 At the time the boys and I walked around Filley Park, there wasn’t much to it. A silt-filled pond, a bridge, and a short little trail through the woods. A trail that, in actuality, is nothing more than a cut-through locals use to walk to stores and such. 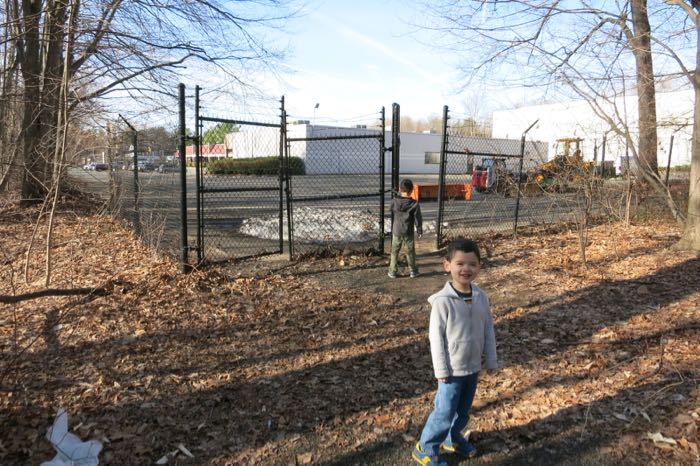 So… yeah. That’s it. But let’s go through my numbered list and perhaps gain a better appreciation for why I dragged the boys into the woods here. 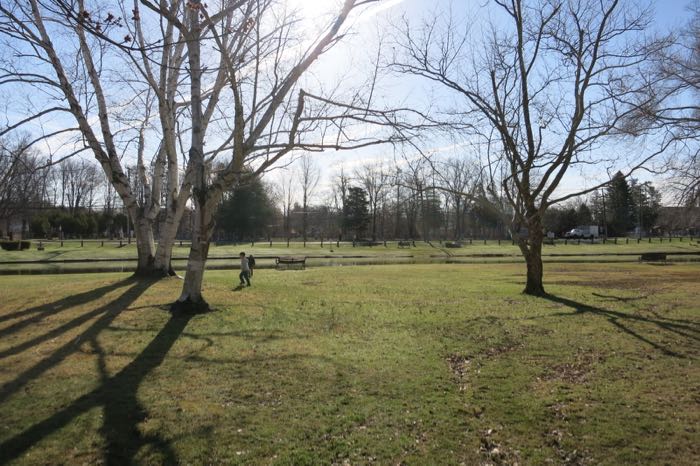 I remember reading about Bloomfield’s proposed Filley Park plans when I brought the boys here and having a good laugh. They were drawn up in 2008 and were certainly the work of some insane fantasist.

“Ho ho hooooo” what a hoot. “Hey look, boys, Bloomfield is going to remove that dam and drain and dredge this pond and build a beautiful island and build a whole trail network and…” We had a good laugh. Like, why would that ever happen? 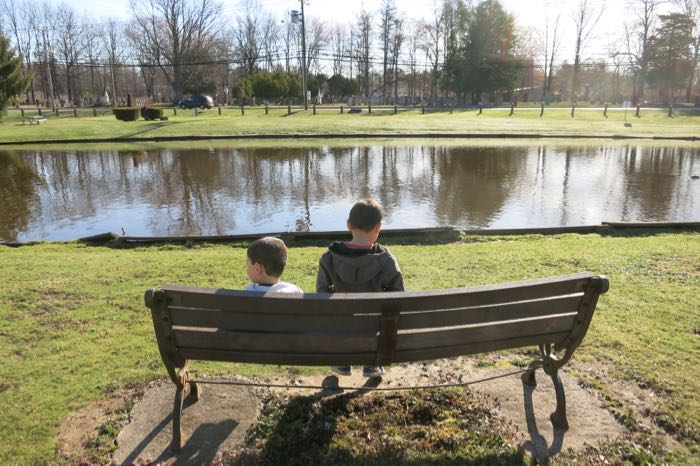 Um. It’s happening. That’s right, in 2018, the project is cranking along. It’s pretty bonkers, but here it is! There is a nice progression of pictures at that site, with links to cool future-state stuff. 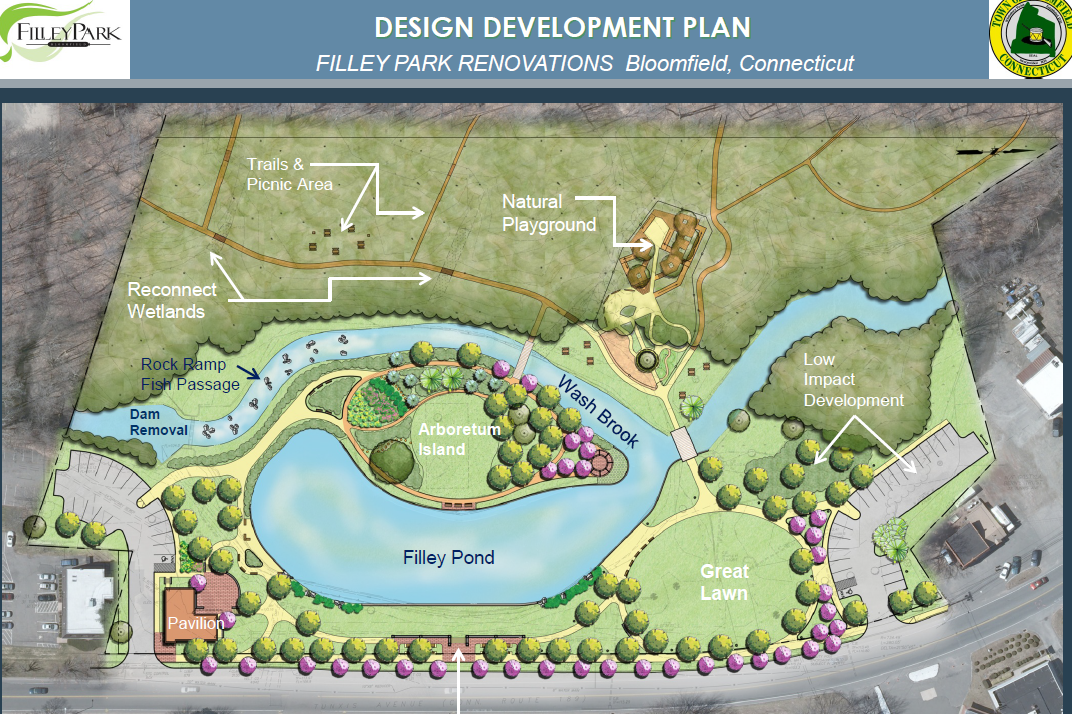 I admit, I certainly didn’t believe these renderings of a madman in 2008 would ever happen, so visiting Filley Park was kind of a lark for me. Now (in 2018) that they ARE happening, it’s pretty neat that I now have the opportunity for a before and after experience.

Which brings me to point 2, above. Look at these proposed trails! 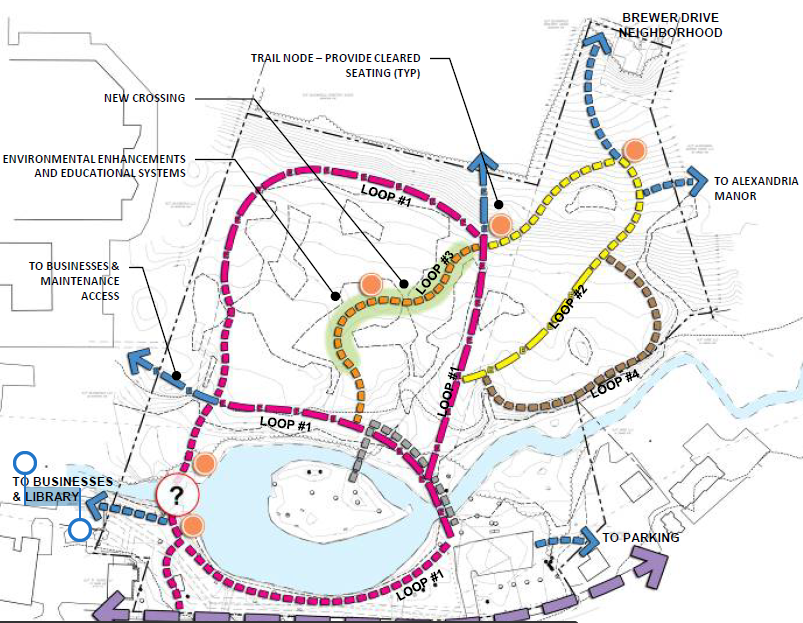 When I went, I was looking for a trail to the Brewer Drive area. For you see, if and when such a trail exists, an adventurous hiker can park here, at Filley Park, and have the ability to hike to… Long Island Sound! Mt. Monadnock! Or even Mt. Katahdin! The Smokies! 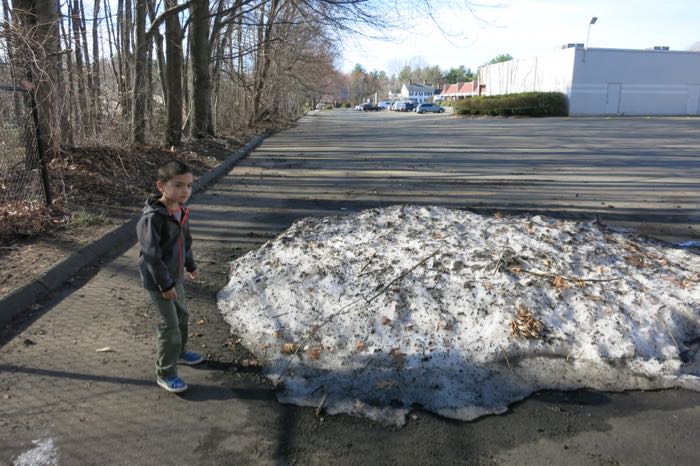 Exciting end to the trail!

Yes, from the Brewer Drive area and west through some Wintonbury Land Trust trails up to the Metacomet Ridge and the Metacomet Trail, someday the East-West Trail will continue west to the Mohawk and then the Appalachian Trail. That trail’s official terminus will be in Bloomfield in Penwood State Park, but you will have the ability to continue east, off the ridge down into Bloomfield and wind up in… Filly Park. 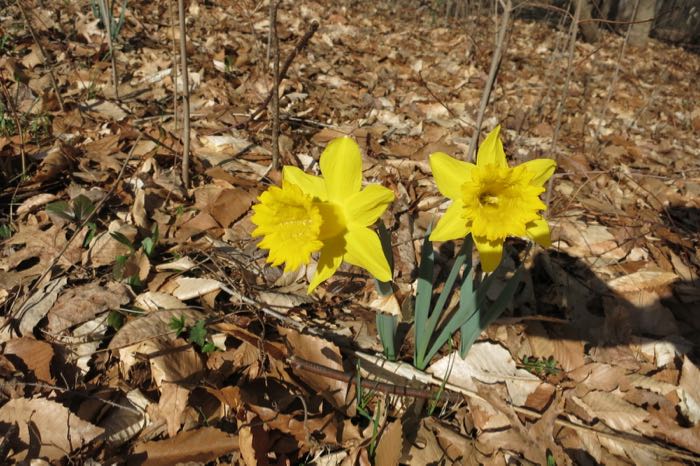 And the idea of eating at one of our favorite sushi, Indian, or Thai restaurants in the center of Bloomfield and then hiking from Filley Park to Georgia via the Appalachian Trail is… awesome. During our hike, we found a sign to the Brewer Drive Area in the woods, but certainly no trail. 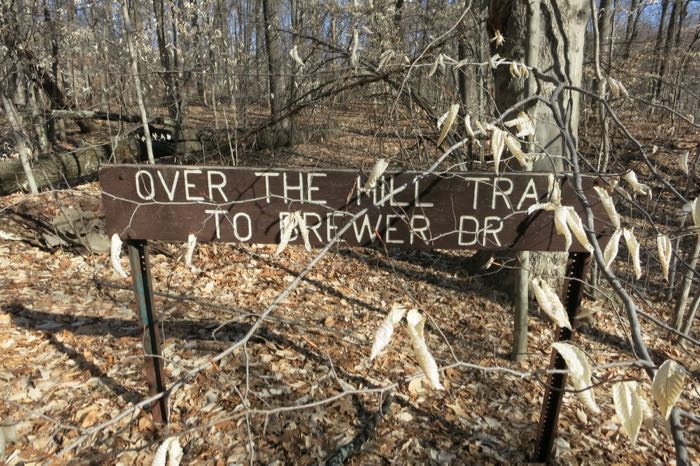 But what we did find was a lovely adult garter snake. And that, my friends, brings us to my third point: a cute video of Calvin.

I already miss him at this age. sigh.

And there you have it. A completely absurd “hike” from 2015 that was purposely hiked because it may become a pretty neat place by 2020, that allows people to connect to the entire eastern seaboard using only a few trails. 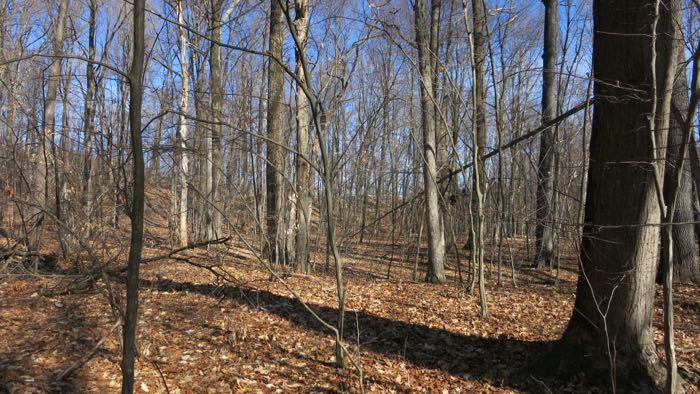 I returned to Filley Park to check on the progress. This wasn’t exactly a trek for me, as I pass the park almost every day on my way home from work. Now with a firmer grasp of what the East-West and/or LaSalette trails will be, I set out to explore where I think they will go. 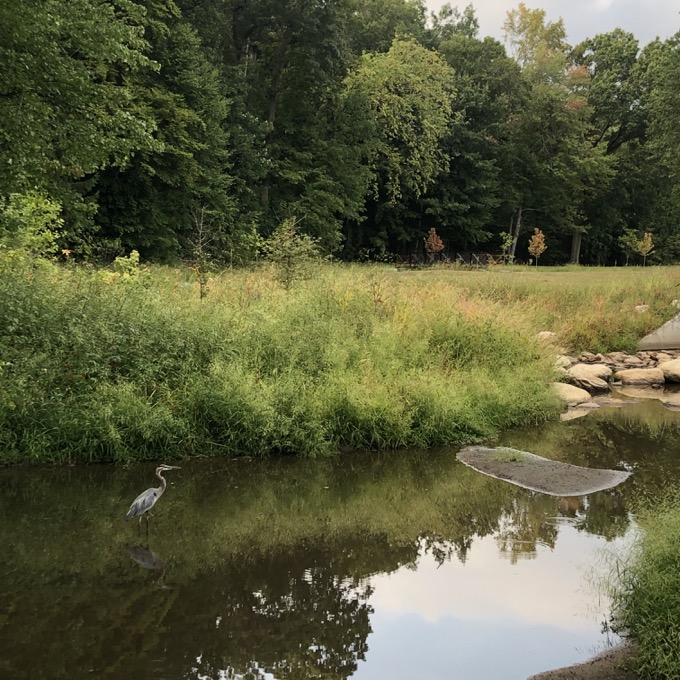 But first I should note that I am now pretty confident that the trail that will begin at Filley Park will be the LaSalette Trail and will be overseen by the Wintonbury Land Trust and the town of Bloomfield – not the CFPA.

Filley in 2019 had a clearly defined loop trail now in addition to the cut-through to the shopping plaza. The Brewer Drive sign is still there, but no trail has been blazed or cleared. I did find a sort of herd path up to the cemetery though, and took that on my LaSalette “before-it’s-official” LaSalette Trail adventure, which is linked below. 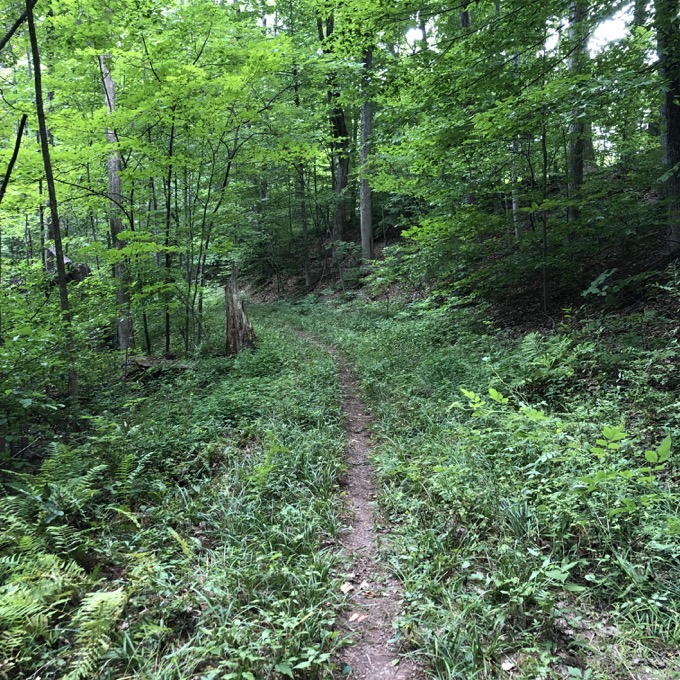