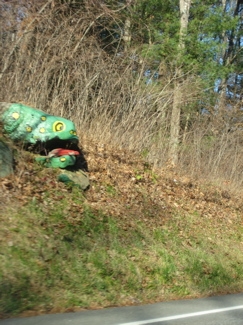 Eh. Since I started blogging about other roadside painted rock animals, I guess I have to continue. Though, I must admit, some of the stories behind some of the rocks are pretty cool. Notably, the much cooler Frog Rock in Eastford a page which gets an inordinate amount of hits and links to it.

But some are merely painted rocks beside roads.

Like this little one on the west side of Route 7 just north of its intersection with route 45.

And yes, this picture was taken through my windshield at speed. Some things – very few, of course – are simply not worth stopping for… Sorry.

2012 Update: You’d think by now I would realize that EVERYTHING has a story. Including this rock, which has been around for a long, long time. (Yes, I know the rock is very old, I’m talking about the painting). I received an email from a Marge in Florida. I think you’ll find it interesting:

Message: Frog Rock Cornwall ,In 1948, when I was 14, my brother and I painted big eyes, mouth, teeth on the rock and added a red stone for a tongue. We repainted it for the next few years. It became a local “landmark” that people looked for while coming and going. After I moved away, others took over. The grass and trees were cut around it and fresh paint added. It turned into a green frog. This had been done anonymously. Over the years there had been speculation about who started this and when. Finally in 2006, after reading an article sent to me (I live in Florida)speculating about the origin of the rock painting, I contacted the Lakeville Journal with my story. Soon after, I was contacted by the Republican-American for a story. It is amusing that this has continued for over 60 years.

Well done, Marge, and thanks for reaching out!