This stop along the Underground Railroad Trail is a rarity; it has its own Wikipedia entry as well as other web presence. Good for you, Kimberly Mansion! It also has a bronze plaque in the middle of the front lawn which I didn’t notice until looking at my picture. Worth a return visit? I’d say no, as it surely has the same info I’m about to tell you anyway.

It’s interesting that while the Freedom Trail celebrates historically important abolitionist properties (and this one fits that bill), this place is actually more well-known for women’s rights and tax protests, as you’ll read below. You’ll also see a horribly out-of-focus shot of the lovely spinsters as well. This is definitely one of the most interesting stories I’ve encountered thus far along the Freedom Trail. 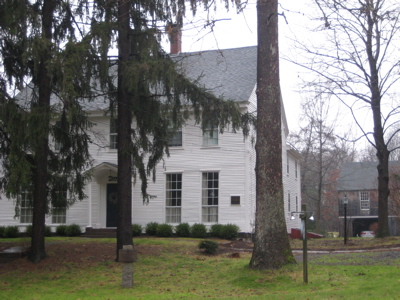 The house was the home of five Smith sisters. Two of them were Abby and Julia Evelina Smith, political activists involved in causes including abolitionism and women’s suffrage. The Smith family used this house as a base for its antislavery activities. The five Smith sisters and their parents hosted abolitionist meetings, permitted anti-slavery lectures on the lawn, distributed literature, and obtained signatures on anti-slavery petitions. At this site the family worked with African American anti-slavery leaders and sought not only the end of slavery, but also improved conditions for free blacks as well.

Julia and Abby Smith involved themselves wholeheartedly in the abolitionist cause. With their mother, Hannah, they circulated an anti-slavery petition among the women of Glastonbury, obtained 40 signatures, and sent the petition to U.S. Senator John Quincy Adams to present to Congress. Historians often suggest that this was the first petition to receive such a hearing.

The motto of our government is ‘Proclaim liberty to all inhabitants of the land!’ and here, where liberty is so highly extolled and glorified by every man in it, one-half of the inhabitants are not put under her laws, but are ruled over by the other half, who can take all they possess. How is Liberty pleased with such worship?”

The town responded by seizing their beloved Alderney cows, auctioning them off and attempting to auction their farm as well. The sisters were able to buy the cows back and fought the town in court, ultimately winning. The case brought attention to the sisters, their cows and the cause of womenâ€™s suffrage.

The sisters came from an accomplished and nonconformist family. The sisters parent’s were Zephaniah Smith, a lawyer and former minister and Hannah Hickok, an amateur mathematician and poet. There were three other sisters: Hancy, an inventor; Laurilla, an artist and Cyrinthia, a poet. Julia also knew classical languages and in 1855, she finished the first complete translation of the Bible into English by a woman. She published the translation herself in 1876 as an example of the accomplishments that women are capable of.

And just for ha-ha’s, I happened across this debatable fact at Wikipedia: Glastonbury is the wealthiest town east of the Connecticut River (in terms of household income) in the state of Connecticut.