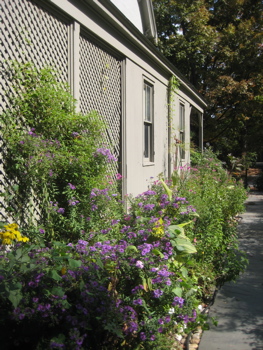 For most people, a visit to the Stowe Center means that all your pictures will be taken out here – in the gardens. Because Harriet Beecher Stowe’s house is one of the “no photography” museums in the state. But that’s not what we’re on this page to discuss… To the garden!

(You can skip my page on this and go straight to the cool “Garden Tour Guide” they offer. I didn’t know this existed when I visited, darnit.)

But first, some background from the Connecticut Historic Gardens people: Harriet Beecher Stowe (1811–1896) is best known as the author of Uncle Tom’s Cabin, which helped galvanize the abolitionist cause and contributed to the outbreak of the Civil War.

In fact, there is a connection between that book and Stowe’s gardens: Stowe, like other Victorians, connected gardening to morality. She believed that an attractive yard implied “nice” people lived indoors. In Uncle Tom’s Cabin, Stowe described the title character, Uncle Tom, as a man who kept a good garden, and his home as a small building with a façade “covered by a large scarlet begonia and a native multiflora rose…” with a front yard filled with “marigolds, petunias, [and] four-o-clocks,” she created an image of virtuous domesticity to help her readers identify with her enslaved heroes. 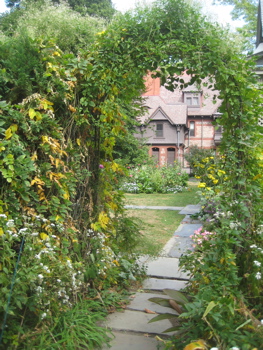 Stowe’s ability to humanize the characters in her novel changed the way many
viewed the institution of slavery, and influenced the abolitionist movement before the Civil War.

After its publication in 1852, Stowe became an internationally acclaimed celebrity and an extremely popular author.

In 1873, Harriet and her husband Calvin purchased and moved into the painted brick “cottage” on Forest Street in Hartford. (She was there first… Twain moved next door a year later). The gardens around the house reflect Stowe’s fondness for and knowledge of the plantings of the Victorian era. Stowe lived in the house until her death in 1896.

The Stowe Dogwood ™ cornus florida rubra is thought to have been planted while Stowe lived at 77 Forest Street. We won’t know this for sure until after the tree dies. The Dogwood became a registered trademark after saplings were created from graftings and cuttings. The first of these was planted at the first women’s college in Japan in honor of Stowe’s worldwide influence. 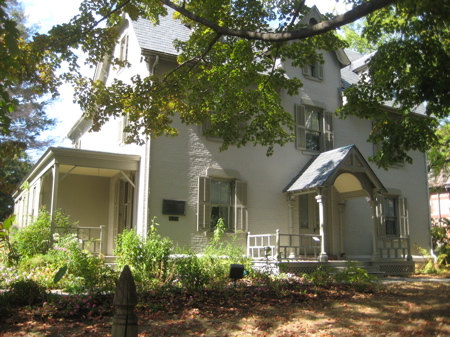 I’m happy to report that the Stowe Center website offers a bit more insight into Stowe the Gardener:

Harriet Beecher Stowe believed in the restorative qualities of plants and 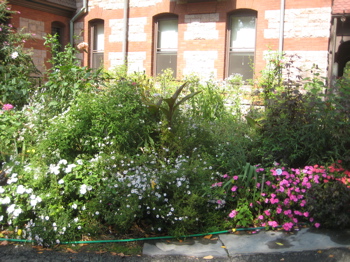 flowers. She advocated healthful living, suggesting that household gardens and sunlight inside the home contributed to well-being. She also embraced naturopathy, an alternative medicine using plants as remedies.

Stowe created gardens at each of her homes, traded plants with friends and family, carefully transported seeds and cuttings from home to home and pressed blossoms into sketch books. In her final years, she could be seen gathering bouquets of wildflowers.

Her gardens inspired another of her interests. Stowe was a prolific painter and often led groups of like-minded Hartford artists in plein-air outings. Her floral paintings grace her Hartford home. 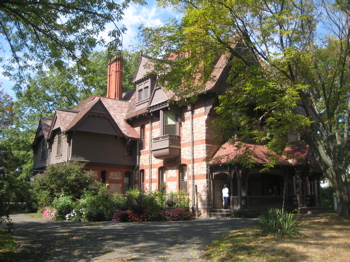 The Stowe Center gardens are a combination of inspiration, interpretation and reproduction. Some of the plantings are historical and others are relatively new plants that we know or believe were here during Stowe’s time.

Inspired by Stowe’s love of plants and colors, offerings range from shade-loving perennials to colorful annuals, from single-color beds to a riot of shrubs and meadow flowers, from exotic elephant ears and castor bean plants to stately roses, and provide ever-blooming arrays from late May through September.

The Stowe Center gardens and grounds are open for strolling. (The house above is NOT the Stowe house, but rather the much prettier Katherine Day House which is also part of the Stowe tour.) My favorite part is the blue garden. Thematically colored gardens became popular in the late 1870s. The most common were all yellow or all pink. Some advice books thought that all-red gardens were in poor taste. The hardest to create, and thus the most desirable, was an all-blue garden, as blue flowers were the most rare. Everything from pale blue-gray to deep violet was considered “blue.” (There is a very similar garden bed down at Harkness as well. CTMQ Visit here.)

Back to CTMQ’s Historic Gardens page