We went to the Hebron Maple Fest in March and, quite frankly, it was really pretty lame. The one exciting part of our visit was noting the sign you can see behind Damian here. “Peters House Just Named Freedom Trail Site!” 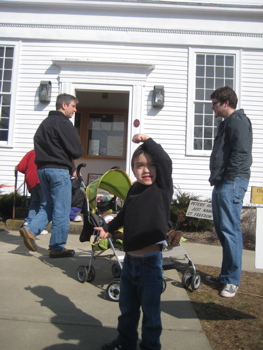 I share Hebron’s enthusiasm! We walked all around the “Hebron Village Center” during our visit to the Maple Fest, so yeah, we were at the appropriate site, no matter what you sticklers say.

Cesar Peters’ life was an eventful one. He was purchased as a slave by Mary Peters at the age of eight and later, as a young man, was sold to her son, the Reverend Samuel A. Peters, the notorious Tory propagandist. At the time of the Revolution, Samuel Peters left for England and all his property, including his slaves, was confiscated by the State of Connecticut. After the war, Samuel Peters, still in England, expressed some intention to free Cesar but sold him and his family to David Prior of South Carolina. In 1787 Prior attempted to claim his slaves but only got as far as Norwich, where a group of Hebron men prevented him from taking them away, under the pretext that Cesar could not be let go because of money he owed to a tailor in Hebron. In 1789 Cesar and his family were freed by the Connecticut General Assembly. The following year he sued his would-be owner David Prior for £1,000 in damages, but dropped the suit before it could come to trial. Altogether, Cesar Peters and his wife Lowis had ten children. After her death in 1793, he remarried to a widow named Sim. Although he also lived in the nearby towns of Tolland and Colchester, he lived most of his life in Hebron, where he dies in his sixties in 1814.