Yes, I know. I know this is a somewhat ridiculous “trail” and to have its own page on CTMQ is a bit silly. Don’t I have enough to write about already? Must I bother with a little walk around a pond in Newington? 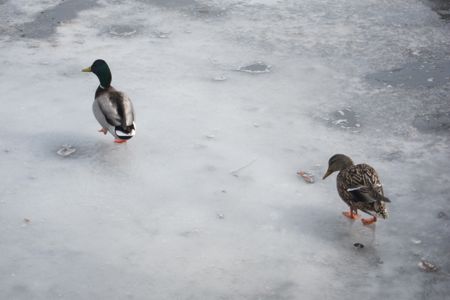 Yes and yes. But once I begin a new goal – in this case documenting many of the town trails around the state, I can’t seem to control myself. And I once said that any town who puts the effort in to creating nice trail maps and guides deserves my attention. And with Newington, there’s an added bonus: The current (2014) mayor’s name is Stephen Woods.

And this Stephen Wood appreciates that the fine folks of Newington saw fit to honor the name with the most important elected position in town. I’ll just ignore the ‘s’ at the end of his name. We are brothers, regardless. 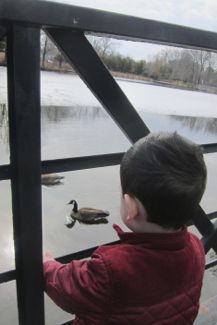 Towards the end of the long and bitterly cold 2013-14 winter, I was clawing for things to do with the boys. They had to get out of the house, but the woods were still too cold and snowy for a proper hike. Most museums were still closed. So I devised a day of free things to do.

In Newington and Wethersfield. Yes, I’m that good. The first stop was Mill Pond Park. (The rest of our itinerary included the Humane Society to pretend we wanted to adopt, a small nature center in Wethersfield and City Fish to see the lobsters and their tropical fish tank.) 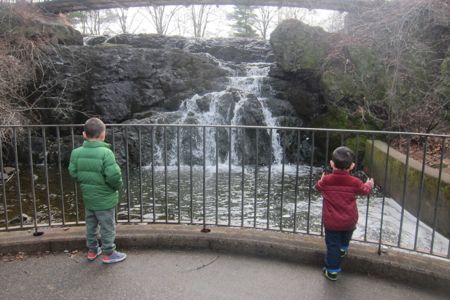 Calvin had yet to enjoy the “smallest waterfall in the country,” the completely absurd designation some marketing genius bestowed upon Mill Pond Falls. And yet, in CTMQ-land, this was the second visit for me and Damian – I wrote about our first.

We parked at the lot near the falls and bam, now Calvin had witness the greatness of these falls. He thought they were pretty cool, I guess, but we had .4 miles to “hike” around the lake, so we got moving. 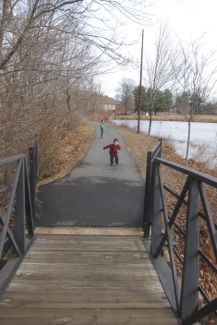 Up the steps and across the top of the falls. Past the ducks and the geese. Avoiding the goose poop along the asphalt path became a fun game for the boys. I took a picture of racist graffiti and some guy stared at me wondering why I did that. I forged ahead.

On the other side of the lake we watched some recent Cabela’s customer, fully outfitted for a day of bird watching in Michigan’s Upper Peninsula during fall migration. Never mind that he was standing alongside Mill Pond in the middle of Newington observing stinin’ Canada geese, I give him all the credit in the world. He is committed to his craft. 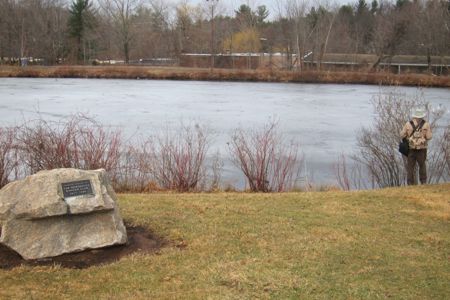 Past the town’s pool and what’s this? A playground? Yes, and an “accessible” one at that, which is always a bonus for the timid Damian. Calvin loved this place, as much as any other playground he’d ever experienced.

The kid is a straight-up monkey, and despite being shy of his third birthday, skipped over the age-appropriate area and went straight to the 5+ section. Damian piddled about, but he did go down the spiral slide after about ten minutes of urging on the part of me and Calvin. I was very proud. 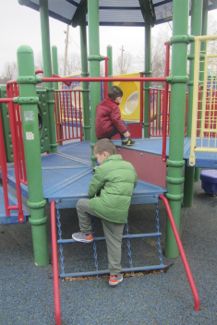 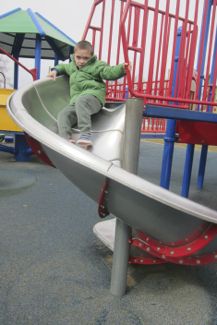 Calvin kept trying to go down slides with snow and/or pools of water from melted snow at the bottom. I was not proud of that.

I finally pried them away from the playground and walked back to the falls and our car.

And that was our first hike on Newington’s town maintained trails. And it was something. 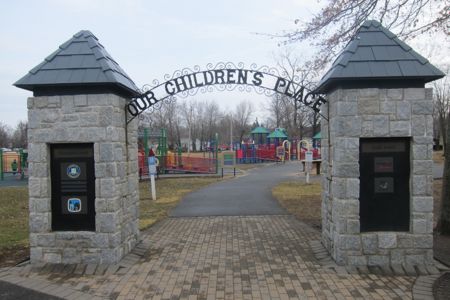