But we survived, wholly intact. Many of our historic and champion trees did not. And that bums me out. According to a Hartford Courant article from April 8th, 2012, this birch “was so severely damaged in the storm that what was left of the tree was cut down.” 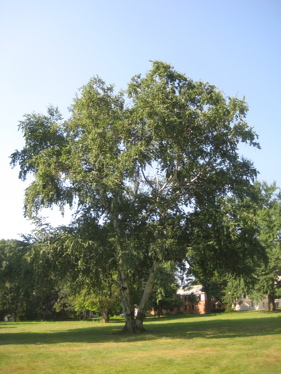 We’ve all seen a million paper birch trees in our lives. I happen to enjoy the look of them, and I’d love to plant a cluster in my front yard if I could be assured it wouldn’t die of some disease or borer – two things to which they are very susceptible. Heck, I even have the room to grow a future National Champion paper birch.

For now, the champ is over in Hartford on the grounds of the always intriguing Institute of Living. The IoL has an interesting museum (CTMQ Visit here) which has received some of the most interesting comments on CTMQ… Though most have been deleted to protect privacy and the potentially ill.

Beyong the museum and the important work that’s done at the IoL, there’s also a cool little tree walk. Numerous trees on the grounds of The Institute represent rare or unusually large species. Many of these trees are thought to date back to the 1860s, when the grounds of The Institute were re-designed by noted landscape architect Frederick Law Olmsted and his associate Jacob Weidenmann; their plan is shown in Weidenmann’s book Beautifying Country Homes (1870).

Both Olmstead and Weidenmann are internationally famous and renowned. Both designed a bunch of cool stuff around the state as well, but I really don’t feel like linking all that stuff on this tree page. This page is about trees man, no need to get all high-and-mighty about it.

There’s a small visitor’s lot to the right inside the Washington Street entrance. If you have a giant SUV or truck, driving around the Institute’s grounds, let alone parking, would be a neat trick. The roads are tiny and the visitor’s spaces are miniscule. Anyway, after parking I made my way through the complex of buildings and down the slight slope to the tree. As birches are so easily recognized, this tree will most likely be the easiest to find of this list. 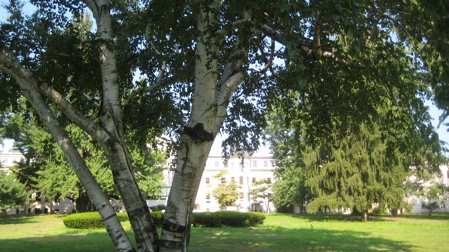 This spectacular four-trunked specimen is fairly old for a paper birch, but it probably does not go back beyond 1900. Native to Connecticut, it is often confused with the gray birch, a shorter-lived tree. The bark of this tree was used by native Americans to make canoes, and it is sometimes called a canoe birch.

One more fact you didn’t know – and didn’t need to know – before we move on: Betula papyrifera is the Provincial tree of Saskatchewan and the State tree of New Hampshire.

Tree Walk, including the above bad boy, at the Institute of Living