Ah, New Britski. I could write several thousand words on New Britain’s Broad Street “Little Poland” area. I don’t know why it fascinates me so much, as I’ve been to plenty of neighborhoods with fairly homogenous nationalities. But something is different here… I think because New Britain is a small city and this part of it is SO Polish that it’s somehow different. For about four blocks, EVERY business is Polish. The only English words you see are on the street signs. When you pop into a store or a bar or whatever, you’ll be very lucky if anyone speaks English. 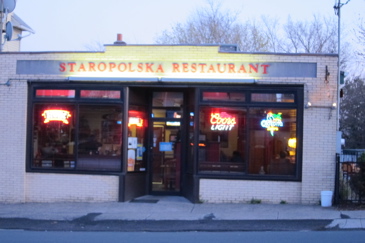 At Staropolska, though, the waitstaff (young Polish women) spoke perfectly fine English – and even better Polish, of course. I had the pleasure of being joined by EdHill. A few of you may know this already, but back in 2006 when I got going with CTMQ, EdHill was my right-hand man. He actually joined me for the first several museums and the idea was to sort of team up to write this site. Then he promptly fell in love and moved to Washington DC and I’ve been solo ever since the beginning as a result. Sniff. Interestingly, he did join me for many of the much-beloved 2006 World Cup Soccer Tour around Connecticut. Perhaps the most interesting bit of that “tour” was our afternoon at the Polish sports bar on Broad Street.

Sadly, that Polish sports bar is now a Polish restaurant.

Before visiting Staropolska, I had the pleasure of enjoying their website. It’s English is so perfectly stilted, I couldn’t have done it on purpose if I tried. It’s beautiful:

Welcome to Staropolska, where you’ll find Polish cuisine, bar, and many, many more other details, which create something, what you can define as ‘atmosphere’. This impression is heightened by aroma of dishes being prepared fresh daily. 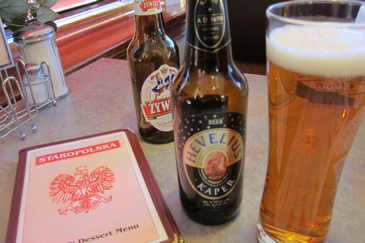 I love that. And I love that it’s probably been on their home page like that for years and no one has bothered to change it. So guys, what are you known for?

We are known for perfect cuisine, rich menu, kind service (known for its wait-staff), and pleasant interiors.

Indeed. (2019 Update: They’ve updated their website, but they still don’t have air conditioning though. Keeping it real.) 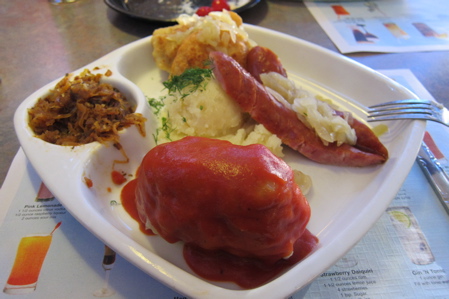 The Polish plate in all its glory, served on a first class airline tray for some reason

Strangely, Roadfood doesn’t really say anything about Staropolska on their website. And the book from whence this list I’m completing comes from also doesn’t say too much beyond putting it on the list of “Best pierogi, placki and golabki.”

EdHill and I both ordered the Polish plate and a beer. I went with a Hevelius Kaper. This 16 oz bottle of 9% beer was only four bucks here. That alone is almost reason to return. (The beer was pretty good; a little floral for my palate, but hey, one larger strong beer for 4 bucks? Sold. 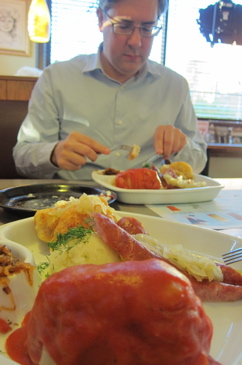 We were each served a massive potato pancake as an appetizer. It was perfect and as an avowed fan of potato pancakes (called placki), I dove right in. The huge serving comes with a very tiny amount of applesauce and an equally tiny amount of sour cream. (You can rudely ask for more like the guy at the table next to ours did.) They also came with a maraschino cherry which is one of my top 5 most hated foods. If you can even call them food.

Up next, the Polish platter. My word, that’s a lot of Polish food. A fried kielbasa with a nice snap to it. A few perfectly cooked pierogi pillows. A mound of dill mashed potatoes. Some kind of smoky cabbage slaw. And a relatively huge golabki, which is a stuffed cabbage thing with tomato sauce.

Now, I don’t often eat any of this type of stuff, other than maybe Mrs. T’s pierogies. But suffice it to say, my whole meal was delicious. I’ve always enjoyed the smoked meats, and the kielbasa was excellent. The pierogies taught me that Mrs. T doesn’t know what she’s doing. 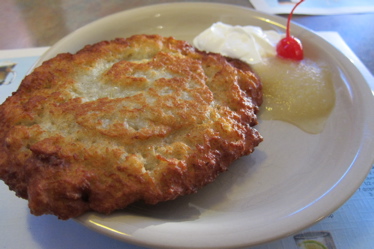 The golabek (the plural is golabki) was the most interesting part, as I have no idea what the cabbage was stuffed with, but it was probably a mixture of pork and beef. Here’s a tidbit I just read that I enjoyed: wherever you are, turn to the person closest to you and read aloud the following with no explanation as to why: “Golabki are also referred to as golumpki, golabki, golumpkies, golumpkis or gwumpki.”

This place was great. The Polish platter isn’t that cheap at 18 bucks or so, but whatever, it’s good and it’s different and you can follow it up with a stroll through Warsaw West, if you please. We did – crossing the street to check out Nozewski Meat Products wherein EdHill bought a bunch of mystery sausages for ridiculously cheap prices.