I am not Muslim. In fact, I’m not anything religious. I’m also not much of a meat-eater. What I AM is fascinated with unique things around Connecticut. There is another Saba Halal Live Poultry place in Waterbury, but I can guarantee you its story isn’t quite as exciting as the Bloomfield outpost.

The name of this business is a bit absurd, as they will chop up far more than just poultry:

“Proudly.” So yes, you can go there, look at a rabbit or a goat or whatever, say, “I want that one” and in short order you will receive some freshly slaughtered and butchered meat. And really, that’s fantastic… if you’re into that sort of thing. Like this guy:

To be halal certified the animal must be facing Mecca, have its throat cut while still alive and then ritually sacrificed by a Muslim who recites a prayer dedicating the slaughter to Allah. Because the animals must be slaughtered alive, stun guns are often not an option as they can kill an animal before the heart pumps out all the blood.

Saba was plugging along, doing their thing slaughtering animals one July day in the summer of 2019. And that’s when everyone became aware of Saba Halal Live Poultry…

A calf escaped and ran across the road into the Home Depot parking lot. A Bloomfield police officer was driving past when he saw the butcher shop employees running across the street. He turned around to assist, spotted the brown cow covered in feces, and called for backup.

The cow was sort of corralled to the one lane access road behind Home Depot and the next thing anyone knew, some guy who had been doing contract work at the butchery, pulled out a bow and arrow and shot it at the cow. I don’t know why, but this cracks me up. He missed and instead struck the back wall of the Home Depot.

Once the employees reached the cow, they grabbed it, and all was well.

But then the Saba guy pulled out a foot-long knife and slit the cows neck. In the Home Depot Parking lot. Shout out to the Sabas though, in the police body cam footage, which you can watch here until this link no longer works, I can confirm the calf was NOT facing mecca when it was killed in the Home Depot parking lot. It was clearly facing south, towards Hartford. 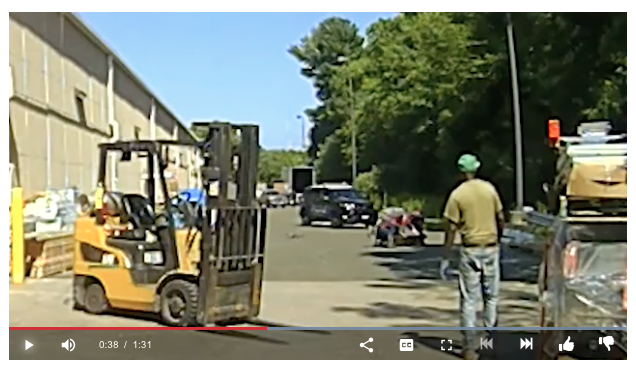 Again, I just found the image of guys running through Home Depot with a bow and arrow and a giant knife chasing a baby cow and then ritualistically killing it out in the open like that absurd. The officer made them clean up the blood and told them not to dismember it in the Home Depot parking lot.

The butcher was charged with public disturbance.

Then Saba was cited for lots of gross animal welfare health and safety violations.

Then they shut down to remodel and expand the joint.

Then someone vandalized the building with “Muslims Go Home” type garbage and the community rallied together to clean it up.

Then a small crowd gathered in a grassy area behind the Home Depot, many holding wildflowers and wearing shirts with vegan slogans. They were remembering a calf they didn’t know who was killed there. They named it Courage. They held hands, sang a song, and gently laid flowers in a pile on the grass. 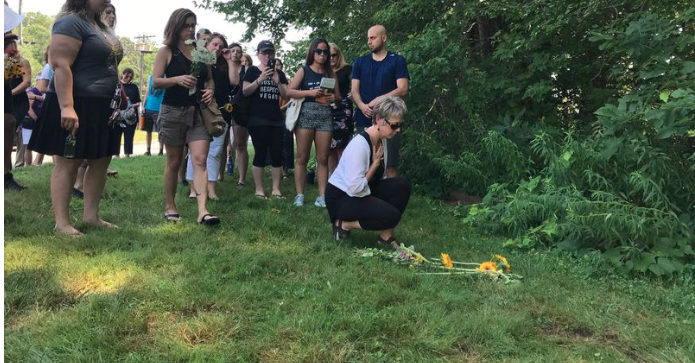 Then the vigil hit a slight bump when a man, who had appeared to be one of the vigil-goers, took to his megaphone to mock the death of the calf. The man pulled out a hamburger and ate it in front of the group.

All within 15 minutes from my house. 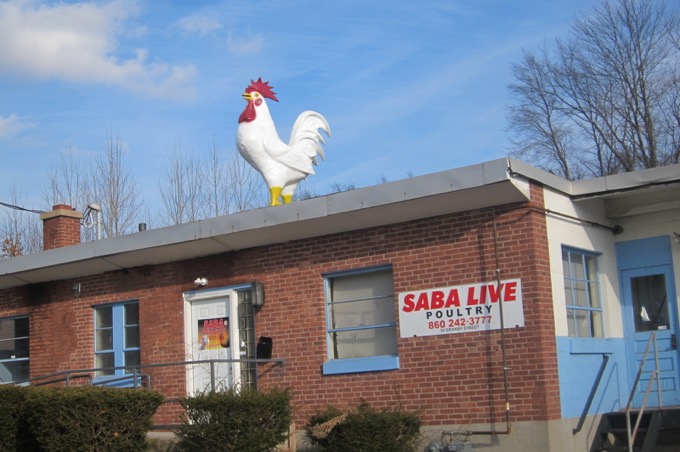 The chicken used to be atop the building

I’d love to cite the various media I used for this page, but these days that’s nigh impossible. Not because of paywalls, because I believe in them, but because the URL’s change too often and the stories disappear. There’s The Hartford Courant and there was NBC 30, but that story has been disappeared. And Len Bestoff was ALL OVER this story, as you’d expect. Sorry, sources.