This page has been changed so many times it’s ridiculous. I’ve done my best to limit its length, believe it or not. The Steady Habit story is so bonkers and convoluted… and I’ve collected so many conversations and screen shots and whatever else having to do with the various foibles of this brewery over its life it’s crazy. Just crazy.

The brewery is located in a decently sized warehouse space behind Tony’s Package Store near the Haddam Swing Bridge and the Goodspeed Opera House. Such a cute part of Connecticut! The brewing system is small and there was a strong DIY feel about the place. And no matter when you visited Steady Habit, there was always one constant: Jon Peterson.

Jon Peterson WAS Steady Habit. He worked at Tony’s Package Store for years, homebrewed for most of those years, sorted out the space behind the store to rent, got some investors, saved up some money, and pursued the Steady Habit dream. 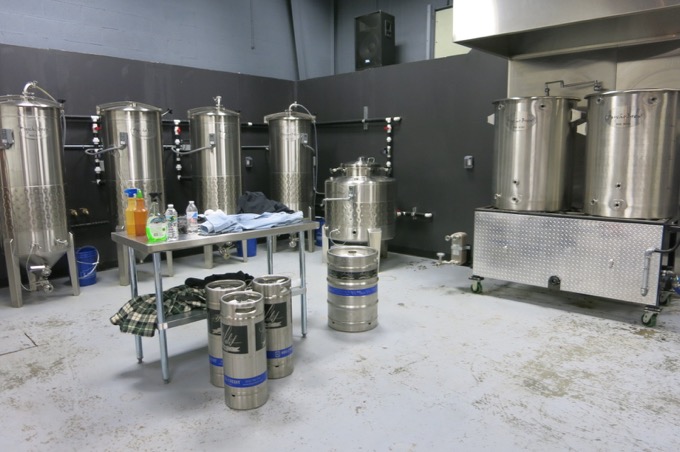 Many of us who knew Jon back then, and knew of his skills, were excited to say the least.

Before opening, Jon worked with a graphic artist to create the branding and logos. The original logo that you still see here and there, was a nod to our shared hardcore punk music background.

You be the Judge

There’s a reason that you hardly ever saw that original hammer logo which was rarely used in favor of the script font one… except, y’know, on the front of the brewery at the time. Jon told me he told the graphic designer to make it an “homage” to the band. Well, he nailed that I guess.

Judge wasn’t the best punk/hardcore band back in the day, but they were pretty well-regarded among kids like me and Jon. Here’s the type of music I’m talking about. That opening riff is tight. Anyway, JUDGE was also a straightedge band, which made aping their logo and collegiate block font even weirder in my opinion.

So yeah, I’ve known Jon for a while. And as for the Judge thing, it’s not a big deal at all; I don’t mean to suggest it’s anything more than a funny tidbit. Steady Habit was ALL him. He had some backers, sure, but they were very far in the background. The beer, the beer names, the social media (bad as it was), Act I’s entire face, blood, sweat, and tears were 99% Jon’s from day one. 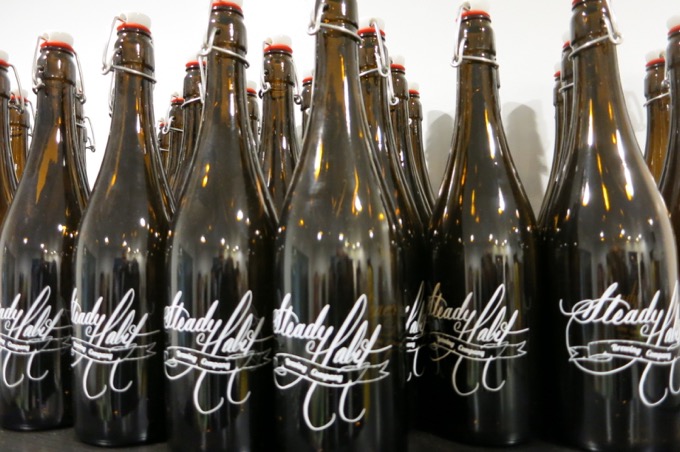 And that was a mistake. A brewery is a business, and neither I nor Jon can pretend Jon knew all there is to know about how to run a business. No one does. Fortunately, he had mentors in other CT brewers and he figured out the state and federal paperwork. He wrote all the blog posts and handled every customer service issue that came up.

Jon barely slept for a year.

Due to an essentially nonexistent budget, Steady Habit had to do some things other breweries don’t. His system was installed with some, um, unique features. Certain pieces were more or less backasswards. The tap system and customer facing operation were as slow as molasses and the cheap plastic tables and sample cups screamed DIY – in a sort of cool, low-key, take it or leave it sort of way.

By the way, I have a bunch of random pictures from multiple visits to the brewery, but didn’t feel like scanning through thousands to find them all. So I’ve lifted a few that are far better anyway. 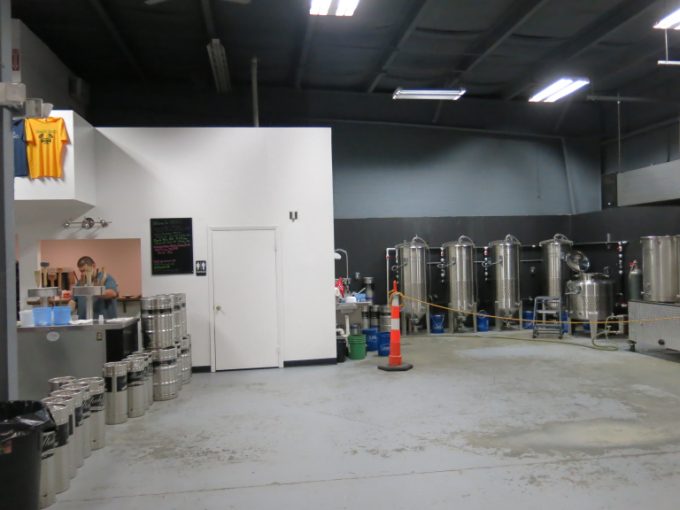 The space was stark. It was the type of space I’d have gone to see a bunch of punk bands for 5 bucks in high school. The tables were the same kind on which I’d peruse ‘zines while adjusting my earplugs. The space was Jon. And I dug it.

However, problems plagued Steady Habit from the start. The biggest one was the slow growler fill line. The fill system always needed an upgrade, and some attempts were made, but it was always awful. Painfully slow. But when you’re one man with limited resources, you can only do what time and money allow.

And yet, people came and waited and made friends in that line. Because the beer was worth it. 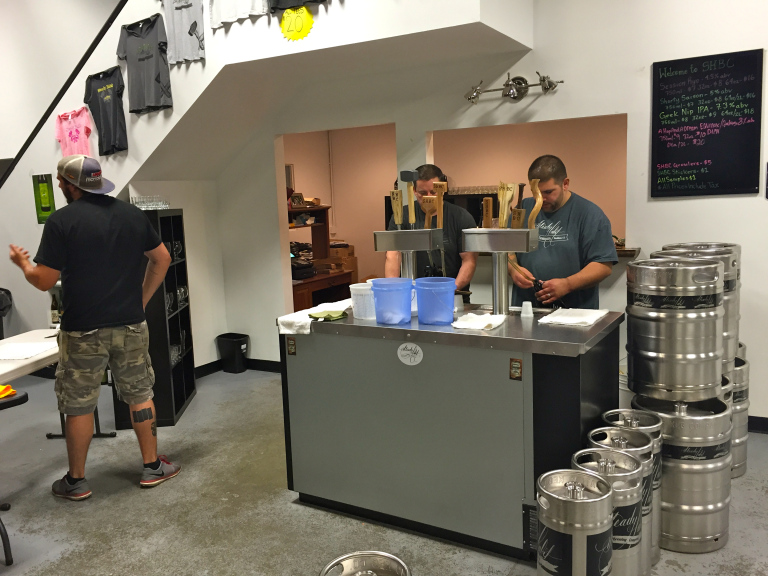 Notice that volunteer dude’s Black Flag tattoo on his calf. Punk enough for you? Picture from EatDrinkBePelle

Jon often claimed issues with his water. Something was almost always amiss with equipment or ingredients or… whatever. It was endless. Most new breweries have growing pains, but Steady Habit had growing destruction. Jon got a rep for being curt and gruff on social media at times. He worked through these things and learned from them.

But the beer! Steady Habit pumped out some of the best beer in Connecticut. It gained a reputation among the “insiders” as being one of the best breweries in the state. Steady Habit was named the best new brewery in the state by RateBeer. Jon nailed several styles and created some innovative beers as well. There were days you could stop in and pick up a chocolate coconut stout, a world-class DIPA, and a hop-forward pale comparable to any in the country.

And then there were days when you couldn’t get anything, due to system issues, dumped batches, whatever. Jon dumped some beer, unfortunately. Probably for different reasons every time. And that’s never good. (Though one could argue from a QC standpoint that it was a good thing.)

Hey! Black Flag guy and Jon! Here’s a song for you both:

But Steady Habit “Rose Above,” scoring collaborations with some of the best breweries in the state: Kent Falls, Lasting Brass and Fox Farm. Jon had the cred and the friendships across the industry in order to really succeed.

Steady Habit was on tap at some of the most desirable spots and despite the sporadic aforementioned issues, Steady Habit had the fanboys, despite all of the issues.

He wanted to expand, but expand the right way. He wanted a canning line, but only when the time was right. (An attempt at mobile canning in the summer of 2016 went horribly wrong.)

Things needed to change after a year, so Jon looked for options. The ownership team wasn’t the right fit, so Jon sought out new ownership. 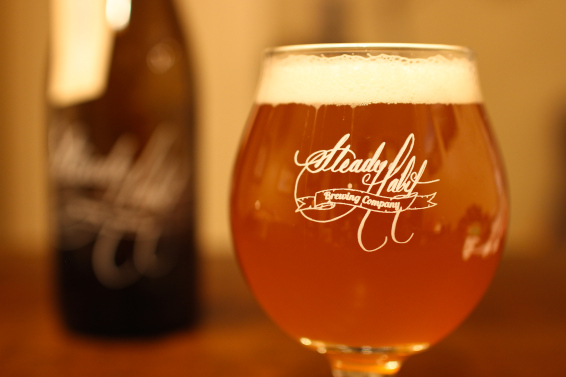 You can tell this isn’t my photo. From BeerChatter which seems to have stopped chatting about beer, sadly.

When a new owner was brought on – by Jon himself – in the early summer of 2016, Jon was initially ecstatic. More control! An actual paycheck maybe! Expansion plans to be realized! I said to friends, “this should be great. Jon brought this guy on, he has money to invest, and he’s a business guy. Jon can now just focus on brewing and leave all the business stuff to this new guy.”

Then… it all fell apart. Quickly and spectacularly. The new owner decided that the brewery he was now in charge of should be different from what we consumers had come to know. Expansion plans, contract canning elsewhere, weird business partnerships. A new sheriff was in town.

Oh, and one more change: No more Jon. 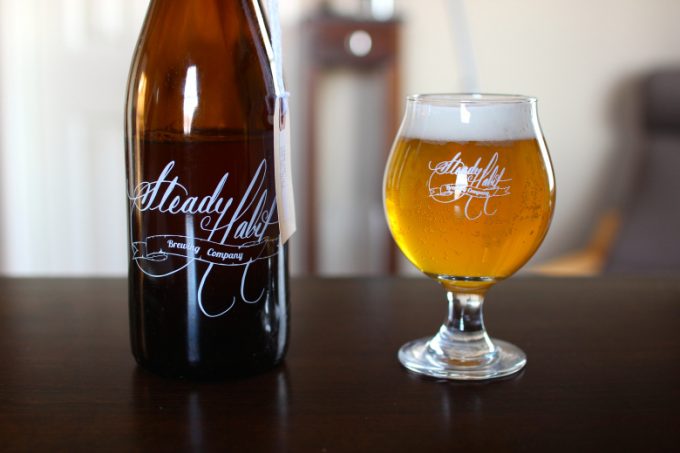 My point is, it’s weird and sad that Steady Habit now exists without Mr. Steady Habit. Going back to the world of hardcore punk music, many band members would take on the names of their bands. Like the lead singer of Judge went by Mike Judge – before the other Mike Judge came to fame.

Jon Peterson is was Jon Steady Habit. As of October 11th, he’s now at Top Shelf in Manchester, which has a whole new space and new ownership. (In fact, they should also think about a new name since literally nothing of the original Top Shelf remains and, well, that’s kind of a terrible name for a brewery.) 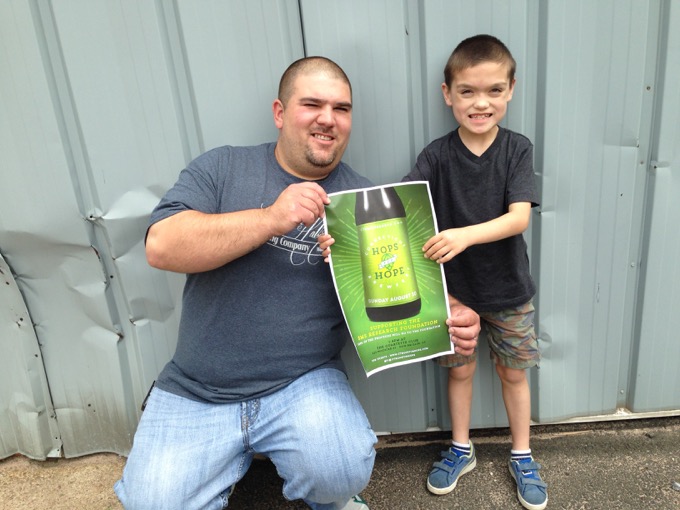 Quick story about Jon. When we announced our first Hops for Hope charitable brewfest in 2015, Jon was all about it. He personally became a sponsor of the event. He asked me more questions about my son and his syndrome than any other brewery involved. He approached me about doing a special release that would continue to benefit the Foundation I work with. So if you hear chatter about Jon being a bum or a jerk or whatever, think about this picture and what the man in it stands for.

As of late September 2016, Steady Habit is run by a former financial broker named Jim Venditti. Will the next chapter of Steady Habit be good? Bad? Great? I have no idea. But whatever becomes of it down the road, it’ll never be “Steady Habit” to me.