When I set out to conquer little trailed parcels around Connecticut, I fully expect to park, pop in, ramble through, pop out, and go on my merry way. Suffield’s three town properties have proven to be far more difficult than one would expect.

On paper, all three are fairly small and have nice little loop trail networks. Reality, however, has not been so kind. 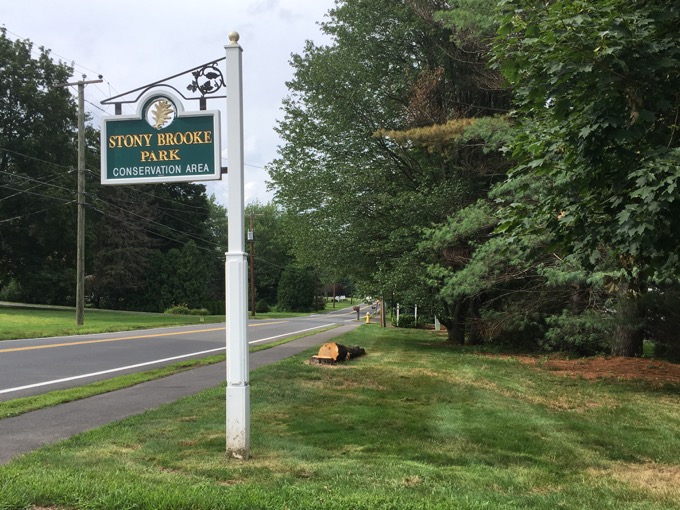 The Jesse F. Smith Memorial Forest has been gated with a “Closed” sign for all of 2017. Sunrise Park is technically only for Suffield residents for some weird reason. And Stony Brooke Park, which must be accessed from two different hiker’s lots, was even more unwelcoming during my first visit.

Damian and I parked at the Remington Street lot on a warm July day and went about our hiking business. Across the field, into the woods, passing a trail on the right that looked difficult to navigate… 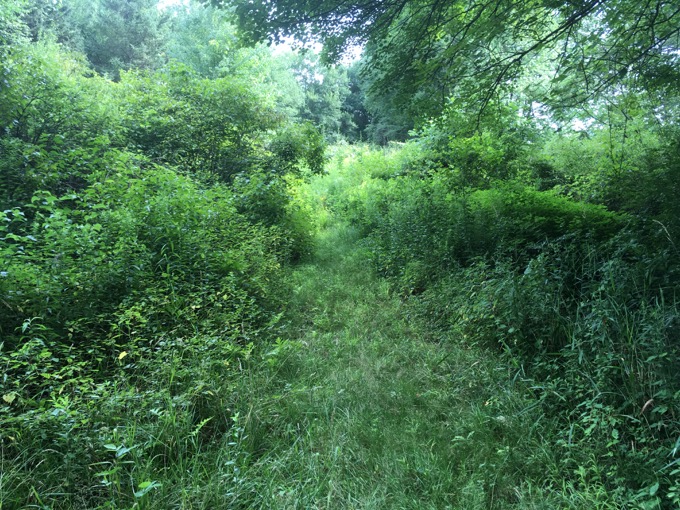 … headed up a slight hill and… 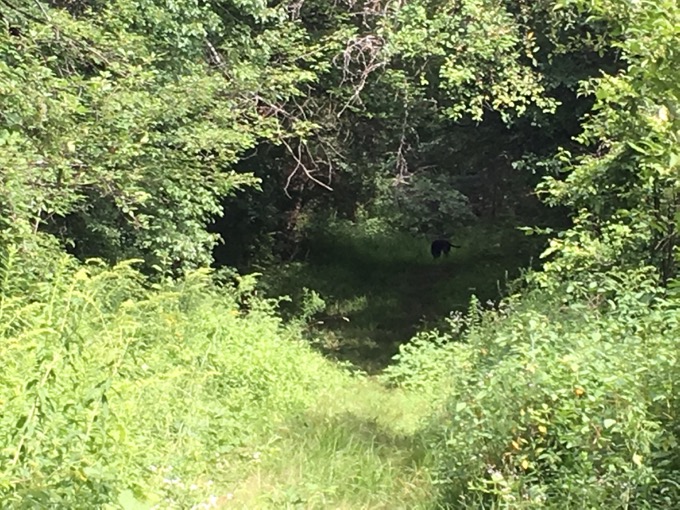 Were confronted with a very aggressive, very territorial, slightly terrifying dog. If I had been alone, I may have attempted to go forward. But with Damian, no way. Then the dog started coming towards us.

We turned tail and walked quickly out of the woods back to the car. That was fun. 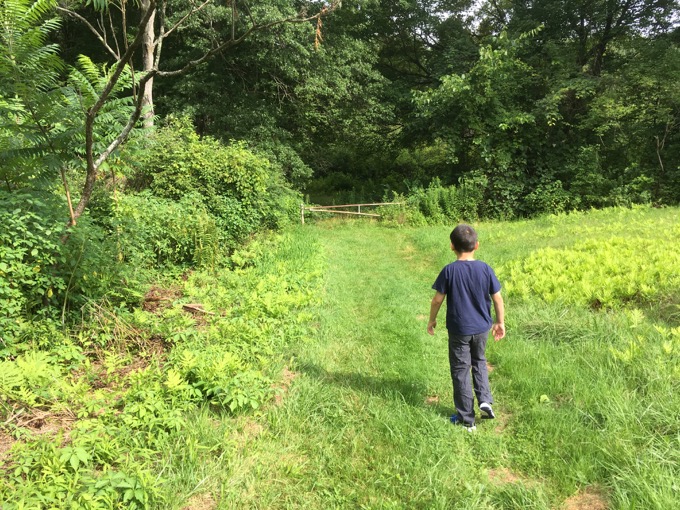 A short drive over to the park’s eastern entrance off of route 75 took us to the other side of the creek, which is called Muddy Brook on most maps – and not Stony Brooke. 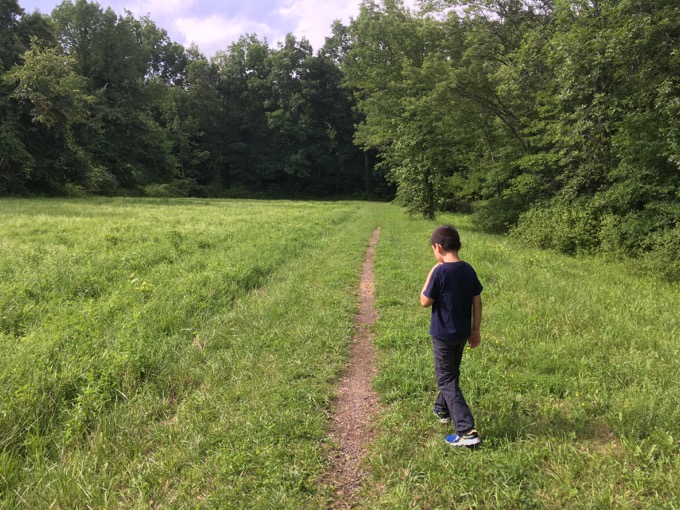 Across the field, into the woods, passing a trail on the left that looked difficult to navigate… I noticed that the woods were covered in poison ivy. 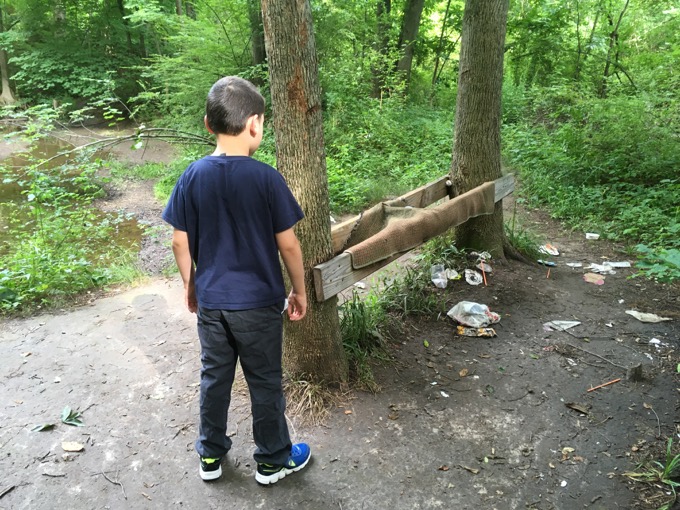 Then we came to a very uncomfortable looking bench and a bunch of trash. Damian was displeased with the general state of things here. 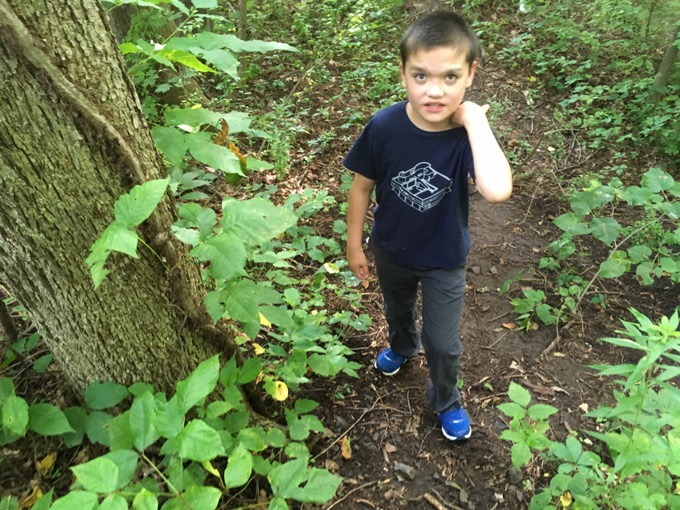 Moving on, along the creek and towards a railroad trestle across the creek, and… Yeah, no. The trail was hemmed in by enough poison ivy to literally kill me. I am hyper-protective of Damian with the stuff for all the obvious reasons. 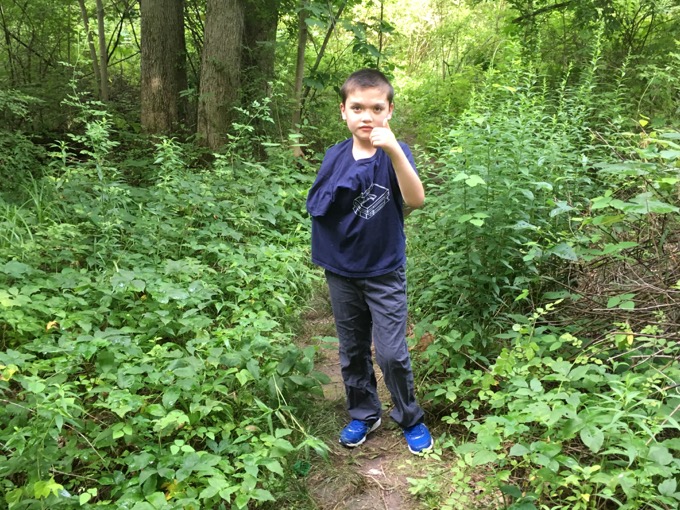 But also because of his special needs and the endless difficulties associated with his syndrome, the mere thought of him covered in itchy, bubbling blisters gives me nightmares. I made him put his arms into his t-shirt and then realized that this was incredibly stupid.

We turned around and returned to the car.

So much for Stony Brooke Park in July. 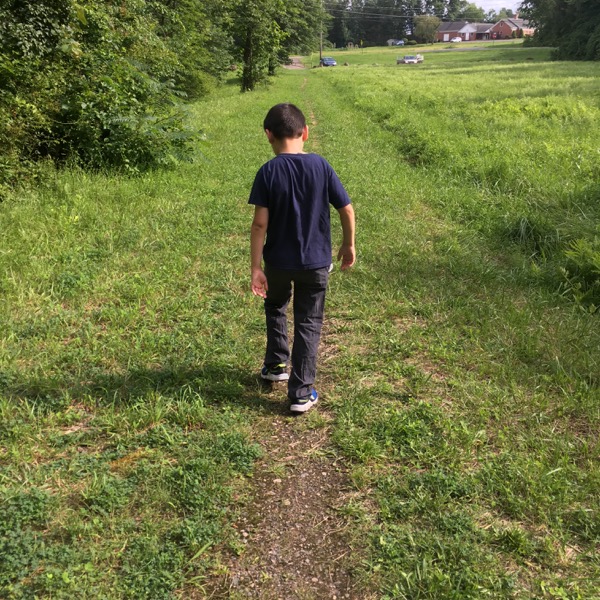 Determined to see what secrets Stony Brooke was hiding from me in July, I returned on a dreary November day. I started on the route 75 side. Across the field, into the woods, passing a trail on the left that looked difficult to navigate, past the trash bench and… 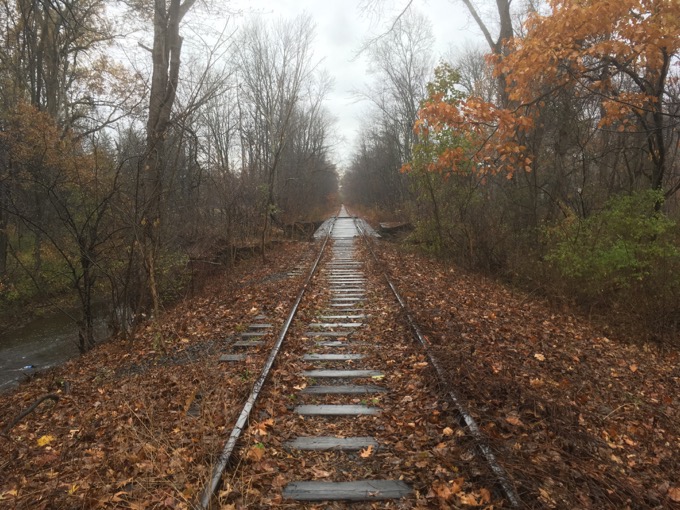 The trail was clear of itchy death. Within a minute, I was up on the abandoned railroad tracks and above the brook. As I had no map of the park’s trails, I found myself simply walking up the tracks looking for any sort of trail that would connect me over to the Remington Road side of the park. 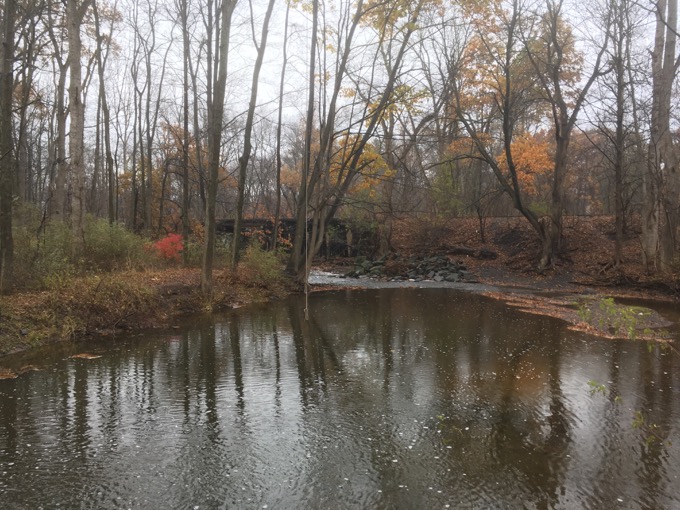 I had no such luck and upon reaching more or less the end of the line, I turned around and went back to my car. Oh, Stony Brooke, you mysterious mistress, you. 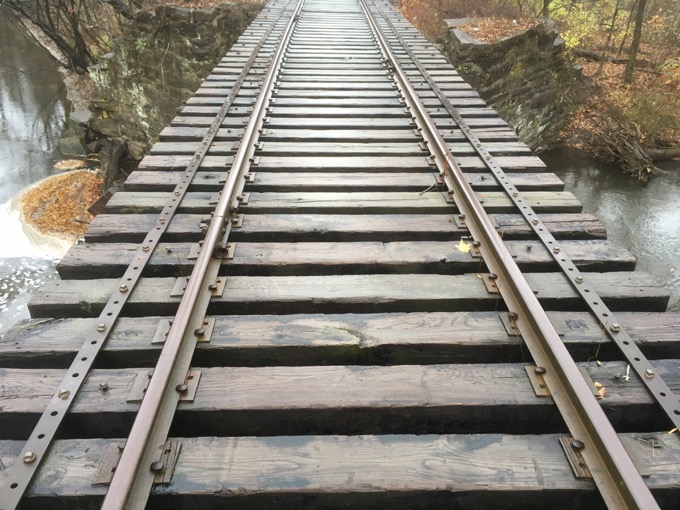 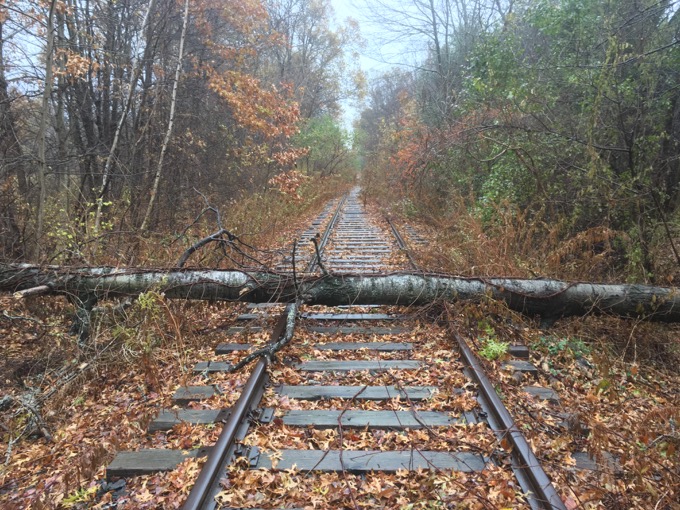 Short drive over to the other entrance… Across the field, into the woods, passing a trail on the left that looked difficult easy enough to navigate, past the point where the dog terrorized us back in July and… hey! I was hiking a well-cleared (yet very muddy) trail! 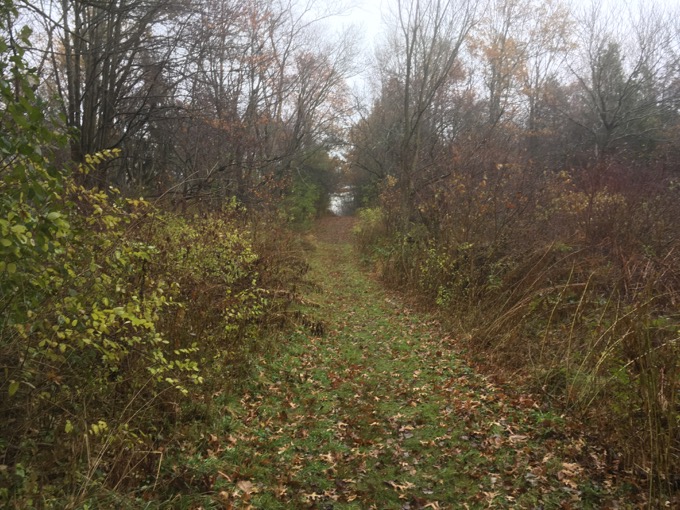 Same stretch as above

One that I assumed would loop around via the trail I had just passed! Finally!

There’s a little pond here with another little uncomfortable bench. 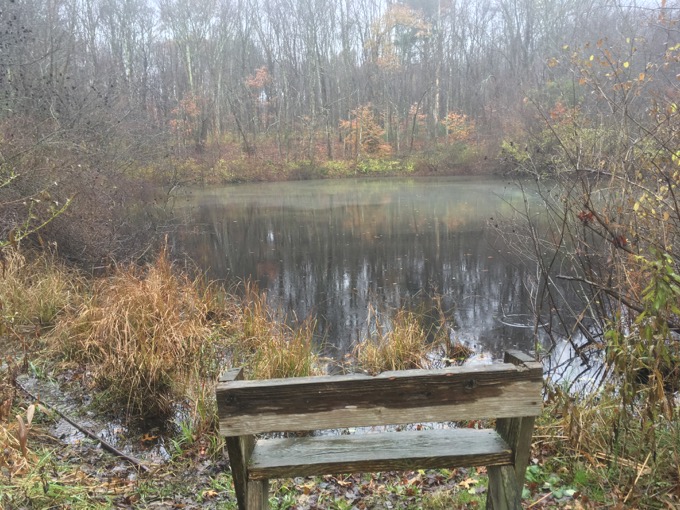 I walked along the muddy brook which was indeed muddy and not remotely stony, and had an internal moral and ethical argument with myself about Euonymus alatus. Known locally as “Burning bush,” these bright red pops of color in an otherwise drab and dead late fall woodland can be visually arresting. 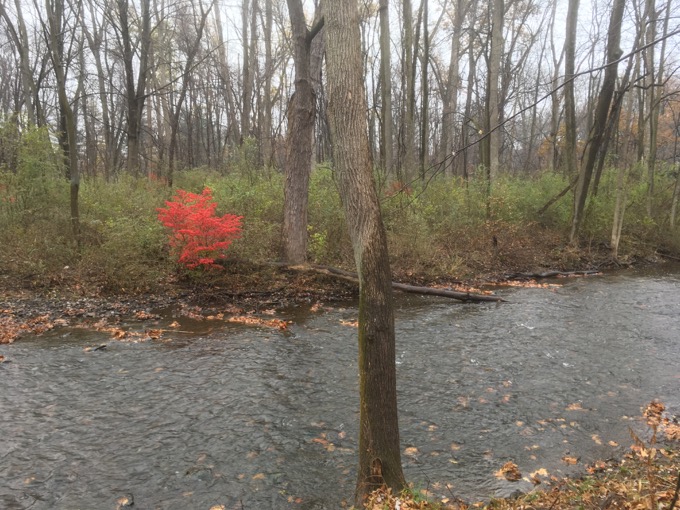 But they are also invasives and can quickly take over land from native plants. The “funny” thing about them is that they look totally and completely boring for 50 weeks a year. They are sold at nurseries and people really love them in November. They make me happy when I see them juxtaposed with late fall’s browns and grays.

But… they are bad news. 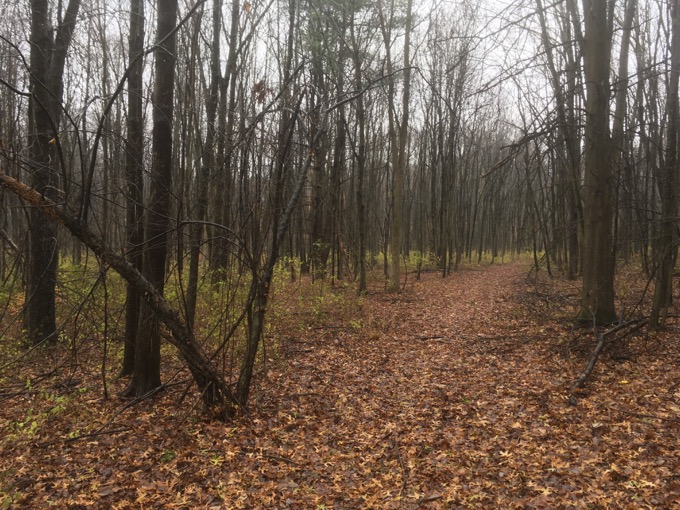 There is a pine plantation here and I was right, the trail does loop back around to join the trail near the lot. Amazingly, it is clear that this last stretch requires a lot of work to maintain, as it cuts through pretty much every field edge plant you can think of – all of which are fast-growing and often difficult to hike through. 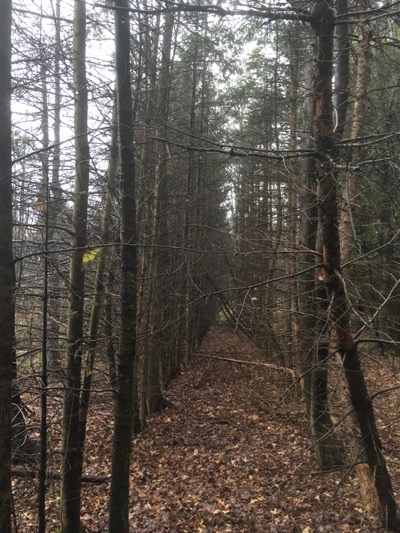 So kudos to whomever deals with this mess a few times per year.

I can’t really recommend Stony Brooke park, but if you must… avoid the route 75 side in the summer and … y’know, you’ve seen this place now. Make your own decision. 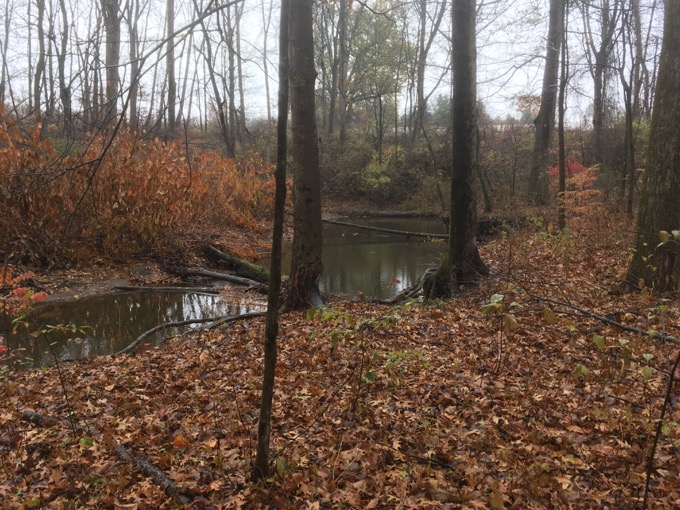