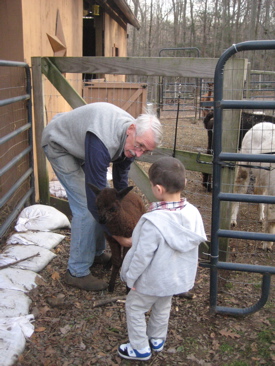 I have no idea how many there are, but I’m sure there are at least a dozen alpaca farms in Connecticut. We will not be visiting them all. In fact, I don’t plan on visiting any more than this one and if we do, there’s no need to write a page on any others.

This place isn’t the biggest and who knows, it might not be the best alpaca farm in the state, but they had a line on some “Things to Do This Weekend” page I stumbled across about an open house. So we went. Upon arrival, we were the only people there, but I was told that others had visited earlier in the day.

We bumbled around by ourselves looking at the alpacas and sheep for a while until a nice gentleman appeared and gave us his spiel. The “farm” is basically their sprawling backyard, which abuts some woods. This is not really the Middletown you think of. 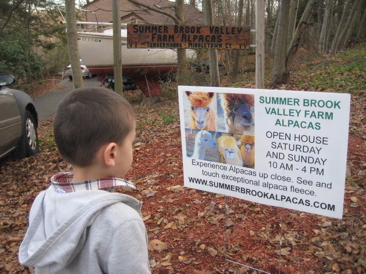 Perusing their website, which is actually quite good for an alpaca farm, this sentence jumped out at me: “Alpaca Farmers are wonderful, friendly, generous, caring, and kind people!” You don’t say?

In truth, the family that runs this place were all of the above.

We are proud to be the first alpaca farm in Middletown. Our focus is on the finest huacayas with emphasis on conformation, fiber, and color. We use the finest herdsires for our selective breeding program. All of our alpacas are ARI registered (Alpaca Registry Inc.), and we are members of AOBA (Alpaca Owners & Breeders Association, Inc.) and NEOAOBA (New England Affiliate of AOBA).

None of that means anything to any of us, but from what I gather, these guys do it right. And judging by how friendly the animals were with us – and especially Damian – it appears they are happy huacayas. Wait… huacayas? What happened to the alpacas? 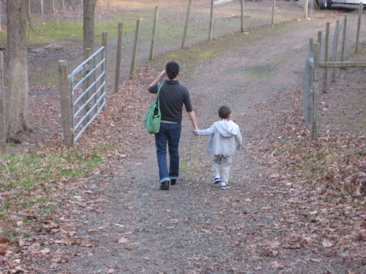 There are two types of alpacas, the suri (su-ree) and the huacaya (wah-kai-yuh). The huacaya Alpacas are bred primarily for their soft luxurious fleece, which is very similar to cashmere. Huacaya have a bushy topknot on their head and a wooly, dense fleece that is sheared once a year. This fleece has a crimp, or waviness, similar to sheep’s wool, but does not have the greasiness found in sheep’s wool. Suri Alpacas have silky, hanging locks of lustrous, penciled fiber that look like dreadlocks. Alpacas lay down (cush) to rest and breed. Baby alpacas (cria, pronounced “cree-ah”) are born after 11 months gestation and live to be about 20 years of age. Adult alpacas range between 150 to 200 pounds and stand about three feet at the withers. Alpacas have padded feet and use community manure piles, thus keeping pastures clean and preserved. Several alpacas can be raised per acre, and their fiber is available in 22 natural colors. Alpacas communicate via humming sounds that are very pleasant and soothing to humans. Like their cousins, the llama, alpacas do spit, but mostly at each other to communicate dominance.

I rather enjoyed that super long paragraph. And I’d like to point out, to all you mothers, alpacas gestate for 11 months and they live outside in the Andes. So no more complaining. 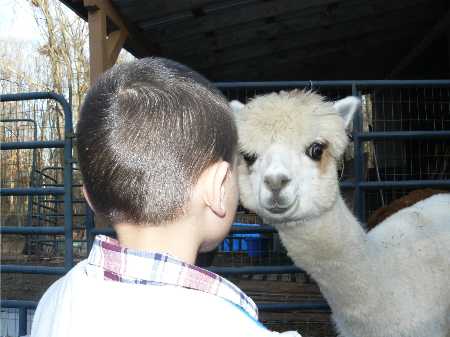 Just kidding. I keep finding more interesting stuff on the Summer Brook website. This is for you if, you know, you’re looking for some new pets. 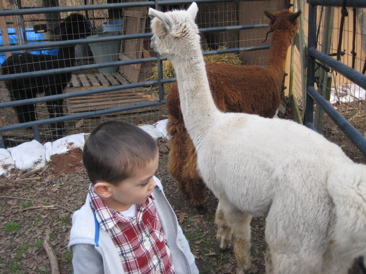 From 1984 to 1998, some specially selected alpacas were imported into the United States from South America. There have been no other importations, and the American herd is now closed. Because the only breeding stock available to improve the bloodlines is here in the US, breeding Alpacas is a good investment opportunity. Alpacas also make practical pets because they are small and easy to handle. They are clean, safe, quiet, intelligent and disease-resistant. Alpacas have soft padded feet that are gentle on the land and can easily be transported in the family van. They make wonderful companions and great 4-H projects for a child. They are safe – don’t butt or bite. However, alpacas do not live alone (they are a herd animal) and you need to own at least two, or stress may set in, the animal will not eat, and could die.

I’m finding these to be fascinating animals: 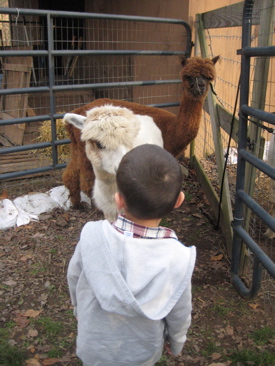 Alpacas have only one baby, called a cria, at a time – twins are extremely rare. When giving birth, alpacas do not usually require any assistance, and have their young while standing. Alpacas give birth normally between 10:00 am and 2:00 pm.

Come on now. That’s just ridiculous. Who says that? Can I see some science for that claim? How is that possible?

A cria is weaned at about six months.

Hm. Okay mothers, does this make the 11 month gestation worth it? Probably.

The mother is usually mated again in about 21 days.

And who knew alpacas were Catholic? Let’s keep going, this is more fun and interesting than I thought it would be.

Alpacas have existed for thousands of years and were a cherished treasure of the ancient Incan civilization. The imperial Incas clothed themselves in garments made from alpaca and many of their religious ceremonies involved the animal. The Spanish conquistadors almost obliterated the alpaca and the native pastoralist who cared for them because they failed to see the value of alpaca fiber, preferring the merino sheep of their native Spain. 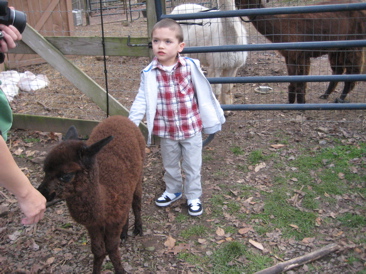 Let’s be fair to those Spanish jerks for a second. Next time you’re in Brooks Brothers or whatever, and find yourself perusing the Merino Wood sweaters, as the clerk for some assistance in finding the alpaca sweater section. Score one for the conquistadors.

But I was struck by the “existed for thousands of years” comment. So I just did some reading to find that yes that’s actually accurate. In fact, they’ve only existed for 6 or 7,000 years. Was Noah’s Flood real? Are they “proof” of biblical literalism?

Um, no. They are actually a pretty good species with which to study adaptation and evolution. There’s a bunch of interesting facts here, which I’ll merely excerpt for the 3 of you who ever read this page. 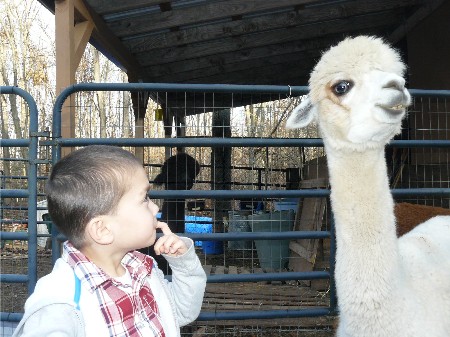 When you hear people refer to an alpaca “in the wild,” what they really mean is, “in South America.” Alpacas have always been a domesticated animal, as has the llama. How these ancient people developed the alpaca from the vicuna is nearly miraculous. In addition to the sparseness of fiber, the vicuna is a double-coated animal of a consistent color. Compare this to the alpaca who produces an abundance of single-coated fiber on an annual basis, in a multitude of colors — talk about evolution!

Zoological archaeologists have determined that the evolution of the wild vicuna into the domestic alpaca began between six and seven thousand years ago. The specialized breeding of alpacas for fiber production was not developed until around 500 B.C. 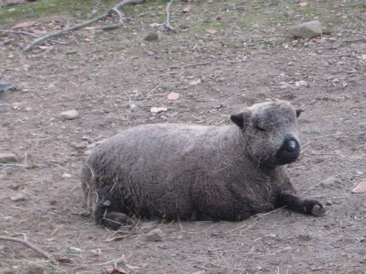 The Pukara indians in the Lake Titicaca region of Southern Peru were the first true alpaca breeders. Much later, during the Inca Empire period, the Incas were remarkably successful in further refining the domestication of the alpaca. These people used rigid breeding control, which must have required considerable record-keeping, to greatly enhance the quality of the fiber. In fact, archaeologists have found mummified remains of alpacas at ritual Incan burial sites whose fiber is far finer than any of our modern day alpacas. It was the Incas who developed the alpaca into the two distinct fleece types, the huacaya (pronounced wa-kai-ya) and the less common suri. Alpacas and llamas were a treasured commodity, utilized for garments, hides, fertilizer, fuel, and meat. The llama further provided them with a means for maintaining close communication and extensive commerce throughout the large empire by serving as a pack animal.

The Spanish invasion of 1532 destroyed the organized breeding program established by the Incas. The enormous alpaca herds were all but eliminated. Survivors were forced into the higher altiplano elevations. The prime grazing lands were taken by the Spaniards for their more valued sheep and cattle. The alpacas ran together with llama herds in the inhospitable altiplano. Living conditions were rough: arid, rocky ground; sparse vegetation; and temperatures that would freeze any cria born at night. It is believed that the unsupervised breeding and cross breeding was the cause of the decline in the quality of the alpaca’s fiber. 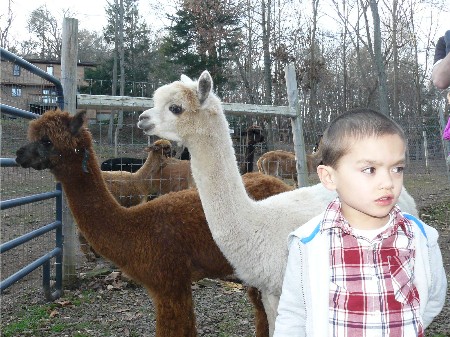 We still have the two basic types of alpacas developed by the Incas – the huacaya and the suri. The huacaya is the more common and is easily recognized by its fuzzier look. The huacaya fiber grows straight out from its body, and is characterized by its crimp. The suri alpaca has fiber that hangs from its body in silky, pencil-sized ringlets. 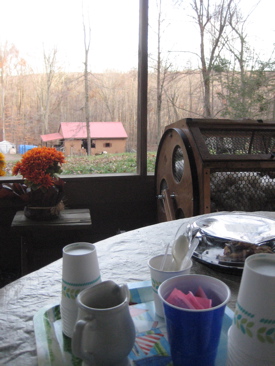 It continues on, but did you catch this part: “Living conditions were rough: arid, rocky ground; sparse vegetation; and temperatures that would freeze any cria born at night.” Another site tells me, that in their native land, “Three hundred nights of the year the temperature drops below freezing and can drop to as low as -20?C. During the day, however, the temperature can rise up to 24?C. They evolved to give birth on sunny days in the middle of the day to increase the survival rates of their crias.”

So it’s true! Nuts, I tell you, nuts. (I poked around looking for some actual facts and not just anecdotal evidence, as 6,000 years of evolution for a mammal is pretty incredibly short and I just find it impossible that they’ve evolved the ability to give birth within a four hour window. it just doesn’t make sense to me.)

Although there are two distinctly different fiber types, both the huacaya and suri have essentially the same body structure. Thus, the determination of whether an alpaca is a huacaya or suri is based upon the characteristics of its fiber. The breeding of two huacayas will invariably produce a huacaya. However, the breeding of two suris will occasionally produce a huacaya. The crossing of a huacaya and a suri also produces unpredictable results.

You’re gonna do awesome the next time you see alpacas at your town fair.

Len from Summer Brook was great with our little family, dropping much of this knowledge on us and letting some of his herd out to walk around with Damian. He loved them and though the faces they made were pretty hilarious. The farm also raises some funny looking kind of sheep too, but I forget which type they are. 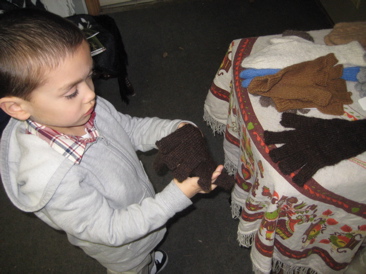 All in all, we had way more fun than I thought we would outside with the animals. We retired to the house and enjoyed some snacks and coffee while checking out the handmade alpaca goods on offer. Bobbie, Len’s wife, makes much of this stuff.

I was tempted to by some socks – buying into the claim that they are much warmer and more water-resistant than wool socks, but was a bit shocked by the $24 price tag. (I was assured that they are totally worth it though. Maybe next time.)

We had a nice chat with the family and it is clear that they are very passionate about their herd and their products.

So there you go; alpaca farm in Middletown are worth the short visit. They have a few open houses throughout the year, so make the effort. 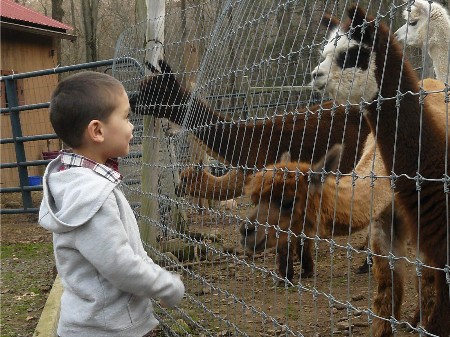