This page is also linked through my Nature Conservancy trails page as well. If you came here from there, wow, you are unique. Here’s more from them about these preserves. 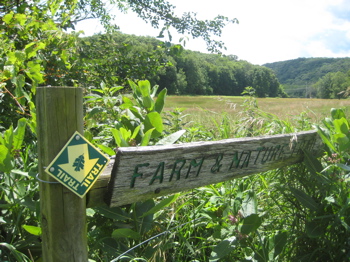 Owned by the Nature Conservancy, the Sunny Valley Preserve consists of 1,850 acres of farmland, forests, wetlands, and meadows on 19 parcels of land. Visitors can hike on trails and learn about nature, land management, and environmentally compatible farming at several observation sites.

The preserve was originally donated to by the late George D. Pratt Jr. of Bridgewater in a series of transfers from 1973 to 1979. Its variety of topography, geology, and natural habitats support diverse wildlife and biological communities. It comprises a variety of terrain along both sides of the Housatonic River Valley, including large stands of hemlock and mixed second growth hardwood forest.

Migratory species such as the worm-eating warbler, cerulean warbler, northern goshawk and scarlet tanager have found a secure nesting place in Sunny Valley’s forests. The preserve’s grasslands and a wide range of vegetation also provide habitat for such species as the eastern meadowlark, bobolink, American kestrel, and Cooper’s hawk, which are known to be declining in the Northeast.

The Conservancy has initiated surveys to develop an inventory of the preserve’s wildlife and plants. Meanwhile, Sunny Valley’s farmland and farm operations remain a focal point of community interest. The Conservancy has returned the preserve’s three primary farms to productive agriculture by leasing them to farmers after making significant capital improvements. This investment has paid off with increased local interest in the preserve and support for the Conservancy.

Hiking in/near the farmland is a fairly unique experience in Connecticut.