CTMQ > Everything Else > Biology & Geology > The Charter Oak 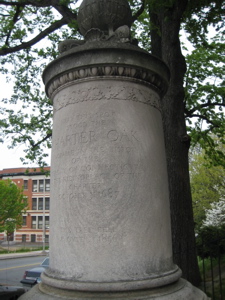 Now, you didn’t think I’d learn all about the Charter Oak over at Museum of Connecticut History or the Old State House earlier and not check out the actual site of the tree, did you? For shame.

A quick drive (it was raining fairly heavily and it IS about a full MILE away!) over to the Charter Oak Avenue and Wyllys Street intersection got me to my quarry: A run-down tiny grocery store specializing in 40 ounce malt liquor. Oh, and the site of the Charter Oak!

There now stands another oak tree, a descendant of the legendary one. A large stone monument stands sentry and gives a brief synopsis of the Oak’s story. Which is this, from About.com: 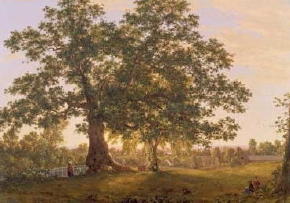 “In 1662, Connecticut received its Royal Charter from England’s Charles II. A quarter century later, James II’s royal representatives attempted to seize the charter. Well, our Connecticut forebears were not about to take that lying down, even though the Brits threatened to split the state and divide its lands between Massachusetts and New York. 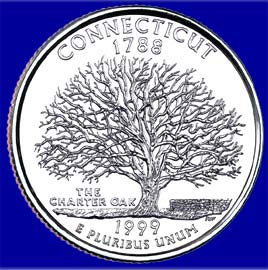 Was it an accident, or a crafty maneuver carefully plotted by the feisty defenders of Connecticut’s rights? We may never know, but what we do know is that one passionate Nutmegger, Captain Joseph Wadsworth, who was positioned outside the tavern, found himself in possession of the Charter during the ensuing chaos in the darkness. Wadsworth took it upon himself to hide the charter safely inside a majestic white oak tree on the Wyllys estate in Hartford. The stately tree was already more than 500 years old when it served its spectacular role as a hiding spot for the precious document. Wadsworth’s bold move served to preserve not only the document but the rights of the colonists.

Thus, the tree earned its nickname–the “Charter Oak.” The venerable tree stood as a proud Connecticut symbol for another 150 years until it was toppled during a storm on August 21, 1856.

Now, the symbol lives on thanks to the U.S. Mint’s state quarters program.

I give the writer credit for not stating this story as 100% fact. But we Nutmeggers can – and will – continue to pretend. 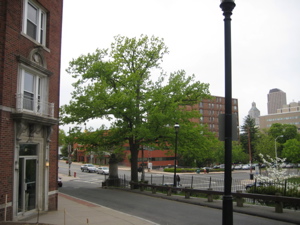