Of the 14 gardens that make up Connecticut’s Historic Gardens, this one is my favorite. And it’s easy for you to see why from the pictures here. (The pictures look funky because they were HUGE 2003-style files from our photographer which I had to shrink down.) 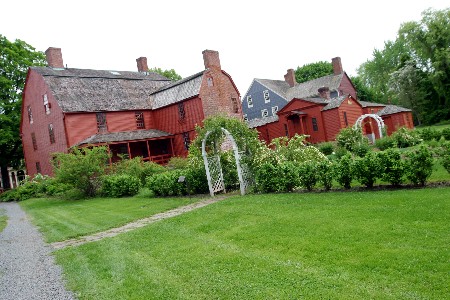 Yes, it was here that I married the love of my life on a coolish gray day in late May. No, the garden wasn’t in full bloom yet and the focus of the cameras that day was on my beautiful bride and not the budding perennials, but you get the gist.

And you get to wonder how I got so much gray hair in short order along with a belly while Hoang has stayed the same. Jerks.

The funny thing to many people is that A) I haven’t yet visited the Webb-Deane-Stevens Museum as of this writing and B) I got married at a museum but at the time, had absolutely no kernel of an inkling of an idea about CTMQ and C) I hadn’t been to more than maybe 3 museums in CT at the time of my wedding.

The Webb-Deane-Stevens Museum’s three 18th-century houses — the 1752 Joseph Webb House, the 1769 Silas Deane House (both National Historic Landmarks and the 1789 Isaac Stevens House — sit on their original sites in the center of Wethersfield’s Historic District. 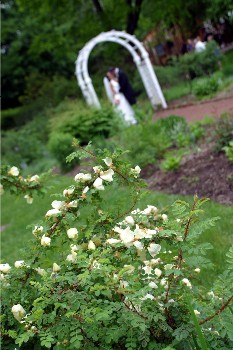 People often ask me what my very last museum will be. Honestly, I’ve never thought about it much, realizing that when I proclaim my last museum visit, some other museum will probably open up a couple months later. But maybe if I could determine it, I’d make it the WDS Museum. Maybe as a huge party right here in the historic gardens again. Yeah, that could be pretty cool.

Anyway, it’s clear that I’ve visited this garden; perhaps for a much longer time (two planning visits and a 6 hour wedding) than 99% of others who have been here. But I’m still not qualified to discuss the specifics, so for that, let’s turn to the WDS Museum website:

Soon after the Connecticut Society of Colonial Dames acquired the Webb House in 1919, they began planning improvements. One of their first major undertakings was to install an “old fashioned” garden behind the house. In 1921, landscape architect Amy Cogswell was hired to be in charge of the project. In the early 20th century, professionally-designed gardens were uncommon, and female landscape architects even more so in a field that had traditionally been dominated by men. Ms. Cogswell graduated from the first American institution for women studying this field, Lowthorpe School of Landscape Architecture, Gardening & Horticulture for Women in Groton, MA, in 1916, and served as headmistress from 1916–1923. Little else is known about her.

{CTMQ Notes: I find this bit of trivia fascinating. You should too.] 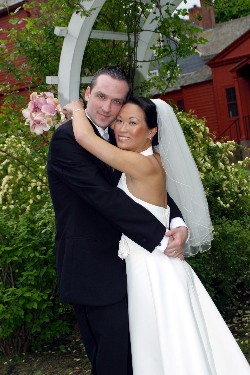 In contrast to true colonial-era gardens, Colonial Revival gardens dating from the 1920s were intended to be purely decorative. The Webb House garden was a prototypical example of the genre, containing classical elements, quaint arbors, and a wide assortment of “old fashioned” flowers. Ms. Cogswell specified mainly hardy perennials, such as roses, with a few brightly-colored annuals to bring the garden to life throughout the summer and fall months. Her plan called for 99 different plants, including hollyhocks, larkspur, pinks, foxglove, peonies, and phlox. Some of these plants actually date to the colonial period, while others simply seem old fashioned. 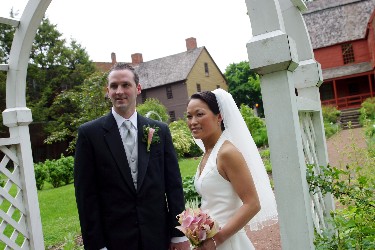 Over the decades, renovations and additions to the facilities resulted in major alterations to the garden. By the 1970s, little remained of Amy Cogswell’s original design. In 1996, her original design was rediscovered in the archives, and in 1999, the Colonial Dames began restoring the garden based on the plans.

While not an exact replica, the restored garden displays many of the same flowers that were originally selected by the landscape architect and enjoyed by visitors in the 1920s. In cases where the antique variety of a plant is no longer available, contemporary examples with equivalent color and bloom time have been substituted. 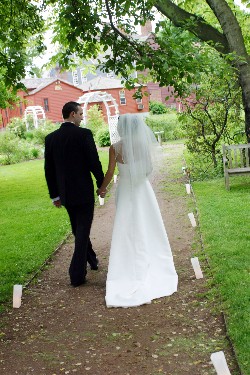 That is a noble effort and one I support fully.

I’m writing this last sentence in 2020 and I’ve still not visited this museum, but we are still married 17 years after these pictures. And considering what a weirdo I’ve turned out to be, that’s pretty amazing. 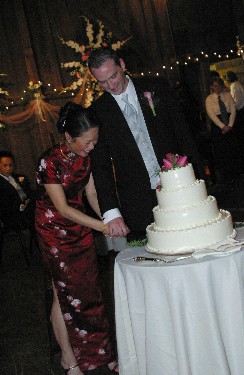