Having just finished up the surprisingly excellent Hancock Brook Trail a couple miles to the southeast in Waterbury proper, I drove the 8 minutes over to Plymouth and the short Whitestone Cliffs Trail. This section of the Mattatuck State Forest is tucked into the little corner of Plymouth just north of the Waterbury line and east of the Thomaston town line. 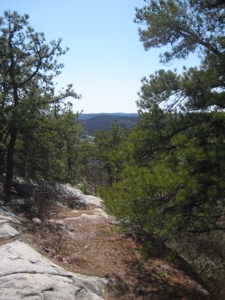 The parking area at the trailhead holds a few cars, but it’s on a very sketchy curve on a hill on a road where I’m sure everyone speeds. People always ponder about my safety on my hikes… but backing into a little dirt pull off along Mount Tobe Road was by far the most dangerous moment of my day. 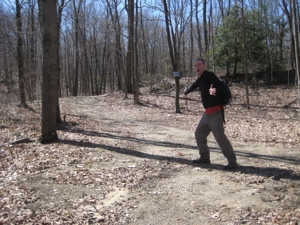 Safely parked, I hit the trail. It starts along an unimproved old woods road and after a slight ascent, passes near a rather nice pavilion in the woods. I trudged up there to check it out, but found nothing of note. I have no idea what that thing is doing in the woods here. (Update: See comments below.) 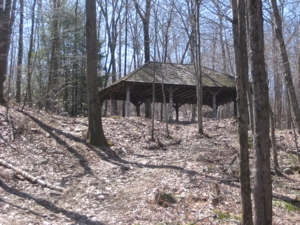 Shortly thereafter, I hit the junction with the connector trail that takes hikers down the hill to Waterbury Road and the Naugatuck River, across the river and then up a hill to connect with the Jericho Trail. I turned right, sticking with the Whitestone Cliffs Trail. 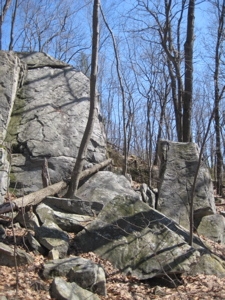 I hadn’t noticed before, but the trail is – duh – named after the white cliffs (which happen to be stone) it traverses. These can be seen from Route 8 around Exit 37 if you’re ever in the area. Once the loop begins (I went with clockwise this time), it climbs up the unnamed 750 foot hill to the top of the cliffs. There is one 15 foot section where hands are needed. 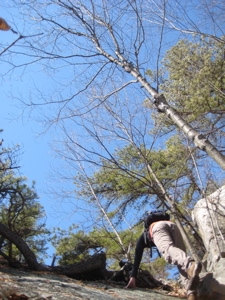 It’s lovely on top. Well, I should say, “It’s lovely on top but the viewshed is a bit littered with Route 8 and other development.” But that would kind of ruin it, wouldn’t it? Speaking of ruining things… Once on top I was hit with an assault of patchouli. Note: I HATE patchouli. Not only do I simply hate the smell, it conjures of scent memories of annoying hippies in college, so it’s a double whammy. 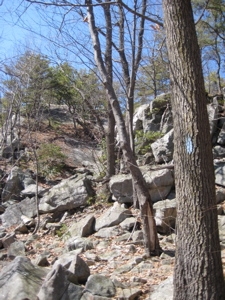 I stopped and listened for bongos or Fritos being crunched or the unmistakable clop-clop of Birkenstocks. I heard nothing. I didn’t want to actually find the hippies, I was trying to avoid them, wherever they were hiding up there. There are many side trails and cool overlooks up there, some of them quite hidden away. Put it this way: The amount of pachouli in air was so voluminous that it masked the marijuana they were undoubtedly toking up. 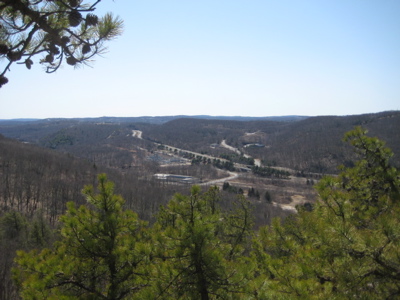 Because of the stench in the air, I didn’t hang out too long and hit the trail again, still going north. It descends to a boggy area and then winds its way around and down the hill into some unfortunate ATV/dirt bike damaged areas. I chuckled to myself at the thought of Waterbury ATV’ers crossing paths with the hippies – it’s surely happened before. Eyeing each other warily, both knowing that they’re both doing something fun yet mildly illegal. Good times. 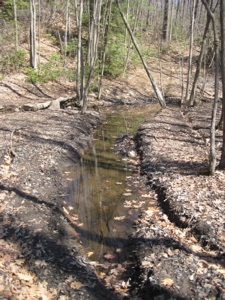 For some odd reason, the trail meanders almost all the way out to Mt. Tobe Road and then turns back away from it. I say “odd” because I think I’d have cut that corner and not gone so close to the road; if only to give one the sense they are truly in the woods a bit more. 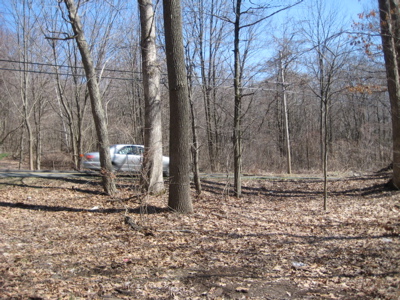 See how close to the road?

Anyway, there is a nice stream crossing with a little waterfall and a huge rock wall as a backdrop. It was a pretty little scene – and as we all know by now, the trail then ascended the rock wall and walked along the top, only to drop back down the backside and rejoin the loop after a stretch through some dense laurel. 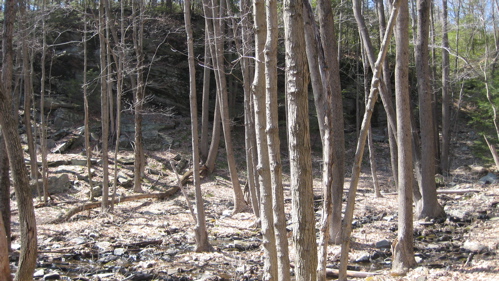 At less than 2 miles, this short trail has some nice views, one decent little rock scramble and a nice woodland brook respite. While it’s certainly not the best of the three (four if you include the connector trail) Waterbury Area Trails, it’s still worth a quick hike. 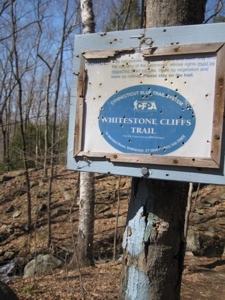