Also check out my 2017 hike of the park to Wolf Den with my sons!

Ask people ‘round here where the Wolf Den is and they’ll most likely point you to Mohegan Sun’s concert arena. And while that’s a late 20th century structure about a half hour away from Pomfret’s much older, much smaller Wolf Den, there actually IS a historical connection between the two. I’ll give you a second to figure out what that could possibly be. 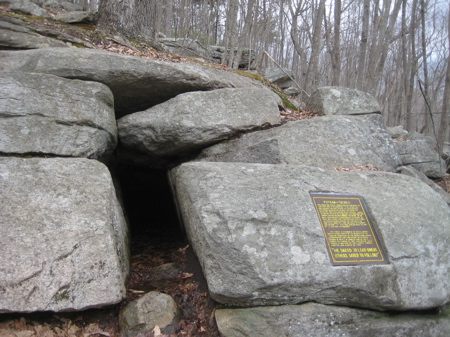 Correct! As you surely know, Pomfret’s Wolf Den is situated in Mashamoquet Brook State Park and Mashamoquet is a Mohegan word for “stream of good fishing.” The region was once the domain of the Mohegan Chief Uncas – and of course the Mohegans are the now-wealthy tribesfolk who own (sorta) the massive Mohegan Sun casino which, of course, contains the Wolf Den arena. It all makes perfect sense.

It also makes sense that the Wolf Den I’m talking about here is famous because a white guy committed an act of environmental crime and was a local hero because of it. This, on land the white guys bought from the native guys for 30 pounds who lived for a thousand years with wolves. 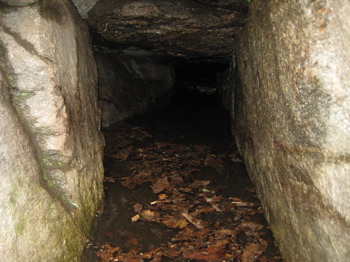 What the heck am I talking about? I’m talking about Israel Putnam who, on a night in 1742, crept and shot a wolf that for years had preyed upon local sheep and poultry. This was said to be the last wolf in Connecticut and Putnam put him out of his misery in this here den. Israel Putnam was later to gain fame as a Major General in the Continental Army during the Revolutionary War. He also, according to town literature, is said to have instructed his men at Bunker Hill, “Don’t fire until you see the whites of their eyes.” (History, however, more often attributes this famous quote to some guy named William Prescott.) 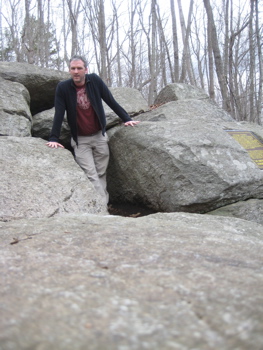 The den itself is now listed on the National Register of Historic Places and has a handsome hand painted sign affixed to the rock face outside the hole. It is located along the blue trail high up on a steep cliff-ridden hillside. During my visit, the den was full of water and certainly not inviting – to human or to beast.

I’d be remiss if I didn’t mention some more about Israel Putnam. He is one of those guys with all sorts of lore attached to him. He has a town named after him (guess the name), a cottage (museum) in Greenwich and perhaps most importantly, Putnam Park out in Redding. There, Putnam held down a Revolutionary War camp that is known as the Valley Forge of Connecticut – and also has a museum. There’s another cave out there too that I’ll get to someday as well. 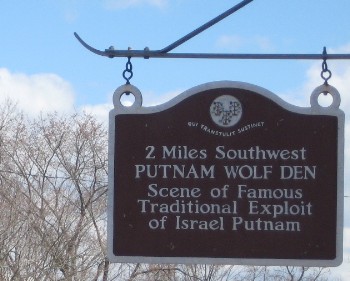 Back down in Greenwich, another legend associated with the man is that he saw the British coming to attack, hopped on a horse and rode it down some stairs (an event commemorated in a statue at the Redding park) to escape via a route the red coats couldn’t follow. So, in short, stick around and read enough of this blog and you’ll run into Ol’ Put again and again.