Do not be afraid of this book. Heck, it’s less than 100 pages long! What is there to fear? Well, two things actually. This little work has a reputation for being difficult to read and in a lesser sense, a “scary” journey into the shadow’s of man’s evil nature. I’m here to dispel both – to a degree. 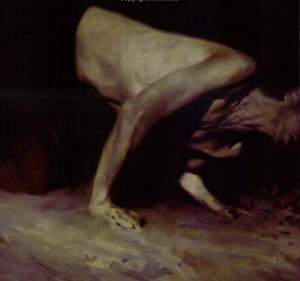 None other than my loving wife and learned mother warned me away from the book; both having stuggled with Conrad’s excessive descriptions and difficult style. “Bah,” I said, “Let’s give it a go.” I finished it in 2 days but it is definitely one of the longest 90 page books you’ll ever read. And yes, this is how I spend my New Year’s Day vacation.

Here’s the deal: The entire book is merely an account of a guy, Marlow, telling his friends about a trip he made up the Congo River to a far-flung outpost run by an enigmatic white guy named Kurtz. Marlow’s boat was a rickety steamer and Kurtz’s reputation preceded him as a bit of a cult hero. Marlow reaches the outpost, is spooked by a bunch of natives, takes Kurtz back down the river where he dies. All this is done under the guise of a simple ivory trade route. The end.

A-ha! Not so fast. Hundreds of literary critiques have been written about “The Heart of Darkness” and it’s rampant symbolism has been overworked for a century. And I truly believe “overworked” is apt. Since I am not a literary critic of any sort, I will be borrowing from other sources in the following paragraphs.

Actually, having just gone a read some of the smart people stuff, I don’t think I’ll bother. The high-level stuff I picked up on my own; the black/white imagery flip-flop, the river as a snake, winding its way up through the “Dark Continent” of Africa. To me, the book is more about Conrad’s language than anything else. And I think I’m the only one, but I found humor in the work.

Marlow took with him 20 or so “cannibals” as crewmen on his boat. His flippant use of the term “cannibals” (as well as “savages” and “n-words”) gave me the impression that Marlow/Conrad was being sarcastic. Marlow states off-handedly that these cannibals were a good lot because they didn’t eat each other “in front of [Marlow’s] face”, nor did they eat any of the white men on board.

Later, while getting closer and closer to Kurtz, Marlow never really seems too concerned by the native attacks or by the massive ego that is Kurtz. Again, to me (and perhaps only me), it was all a set-prop… A joke. Was this because Marlow fancied himself “superior” to the Africans or because the whole strange thing was just very silly? That’s the question I’m left with – as opposed to the critics with their high-minded wonderings.

I can buy this: “This novel exposes the myth behind colonisation whilst exploring the three levels of darkness that the protagonist, Marlow, encounters–the darkness of the Congo wilderness, the darkness of the European’s cruel treatment of the natives, and the unfathomable darkness within every human being for committing heinous acts of evil.” So Kurtz turned evil – was in his nature? Was it the natives that did it, i.e., did he fight evil with greater evil? Was he just crazy? Did the ivory trade make him so? See, who needs those types of questions?

The set-up to the story of the trip is indeed difficult reading. It’s the kind of reading where you mark your page and come back to it later but don’t remember what you just read. Heck, time doesn’t even need to pass to “forget” what you just read. But once the boat gets going, Conrad is at his best and the book really picks up pace.

And, much to my surprise, I found myself really enjoying the story. Fight through the first 25 pages and the rest of the book will just fly by.