CTMQ > Everything Else > Books, Movies, People, & Stories > ML73. The Day of the Locust 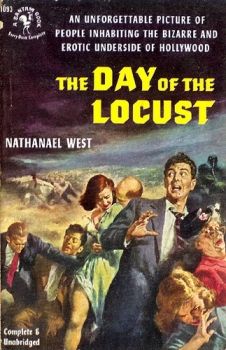 I was so happy to read this book. Really and truly. For one, it’s nice and short. (So short that Hoang picked it up and read it in a 24-hour block over the last two days of 2010, for no other reason than to rub it in my face that she is still way ahead on the Modern Library Top 100 goal. Sigh.) Secondly, it’s good. After the truly awful To the Lighthouse earlier this year, I needed as much straightforward good writing as I could absorb to rid myself of that scourge. The Day of the Locust fits that bill perfectly.

That’s not to say it’s a perfect book; it’s not. Some of the plot devices are a bit hackneyed – like how the protagonist is named Tod Hackett was a Hollywood “hack” – but sometimes that works. West makes it work beautifully.

Of course, I may feel that way because I seem to share his disdain for Hollywood culture and especially what it means to be famous. It doesn’t matter that this book was written over 60 years ago, the same fame-whoring stupidity exists. But now, it’s everywhere and not just in LA. Sigh.

The story follows the exploits of a loosely affiliated band of Hollywood also-rans, rejects and hope-to-be’s. Hackett is a set painter who wants to be a writer and a lover. Faye Greener is the woman he wants to love but she’s far too focused on becoming famous and dating more famous (and rich) men. Homer Simpson (yes, that’s right) is the downtrodden lunk who moved out there to find greener pastures. He found Greener, and she destroys him by making him her useful puppet and benefactor. Of course, Faye’s father, the out of work out of luck vaudevillian didn’t exactly teach his daughter the finer points of being human.

Tod seems like a nice enough guy, if a bit socially inept. He’s in awe of the confident cowboy who wins Faye’s affections and of the Mexican sidekick’s ability to dance and do other overtly sexual things. The idea of what love is, in Hollywood anyway, is explored and denigrated by West. It’s never pretty and it only reaches climax at the wrong time in the wrong place. And even Tod has it all mixed up: If only he had the courage to wait for her some night and hit her with a bottle and rape her.

Yeah, that’s the hero of the novel. He’s just being honest. Which means West is being cynical – and honest.

West explores OCD (in the 1930’s!), religious frauds and stage moms. Yes, a generation before those borderline criminal shows on TV about pageant moms, The Day of the Locust features a spoiled little punk kid whose mom swears is going to be the next Shirley Temple. It is this kid’s poor manners and lack of respect that set off the final climactic riot mob scene wherein all the Hollywood failures sway about in a seething, grotesque and violent mass.

West never misses an opportunity to blast the fakeness of Hollywood. Even in describing the local market he writes, “colored sportlights played on the showcases and counters, heightening the natural hues of the different foods. The oranges were bathed in red, the lemons in yellow, the fish in pale green, the steaks in rose and the eggs in ivory.” He describes funeral goers not as grieving friends of the family, but rather as a collection of people listening to the bird calls in the trees or wondering random things about Christ’s actual life.

Nobody gets what they came for. Everyone in Hollywood is a delusional loser. I’m not sure how much of these thoughts and feelings were West’s true feelings, but he sure nailed what becomes more and more of a reality with the likes of TMZ and OJ Simpson trials and VH1 programming and on and on and on. While Tod’s “Burning of Los Angeles” painting was fictional, as was the final riot… It sure seems like we’ve been on the verge forever.