This page was written in 2007. If you’d like to see much better pictures with my sons, we did the Henry Buck Trail together in 2016. There’s really no reason to even read my 2007 stuff, unless you’re a CTMQ Superfan. For your sake, I’ve shortened and edited the below a bit. 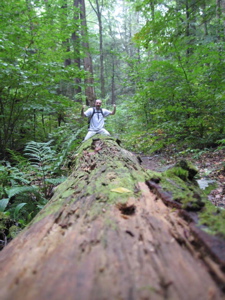 The American Legion Forest is a smallish state forest west of the beautiful Barkhamsted Reservoir out near aptly named Pleasant Valley and Riverton sections of Barkhamsted.

The West Branch of the Farmington River forms the eastern boundary and splits the American Legion Forest from People’s Forest, which is another state forest across the river. The American Legion gave most of this forest to the state. The first deed was received in 1927 and the most recent acquisition was in 2004. Within its 900 acres, American Legion State Forest has two trails for your hiking pleasure; Turkey Vulture Ledges Trail and the Henry Buck Trail. One is very short and the other is even shorter. So let’s get to them already, shall we?

I’m a purist, plain and simple. When I set off on my Appalachian Trail thru-hike in 1997, I was adamant about walking every mile of the thing. I’ve retained this sense of what “completion” means for my CFPA Blue Blaze Challenge mission. 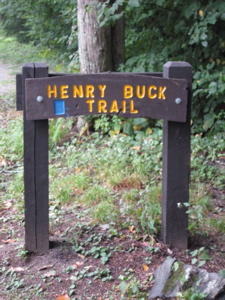 I had a couple hours free one Sunday morning and sped out along Route 44 West to get some hiking in. As I drove north along West River Road, I was struck with just how pretty this area is. The majestic hemlocks and well-maintained camping areas reminded me of a National Park out west somehow. In fact, in 1994, this stretch of the West Branch of the Farmington River was designated by Congress as a Wild and Scenic River. 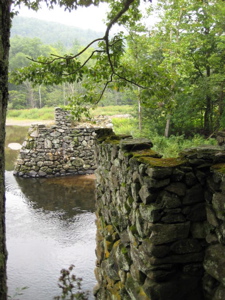 After the pleasant drive along the river, I found the Henry Buck trailhead, parked, and hit the trail. Actually, first I crossed the road to check out the stone ruins of a bridge that used to span the river, connecting the two forests. It was built by the Civilian Conservation Corps but was destroyed in the 1938 hurricane. In fact, there are a lot of things built by the CCC that remain here today. (Mostly campsites and stone stairways and waterbars and such.)

The beginning section of this trail is relatively easy traveling on soft trail through lush forest. Rumor has it that the wildflowers here in the Spring are some of the best around. After a short while, the trail turns sharply up hill following a stream bed. Once the trail somewhat levels out again, I passed what the guidebook told me were the remnants of the old cheese box factory that operated in the early 1800’s. They made wooden boxes to store and ship locally-produced cheese. 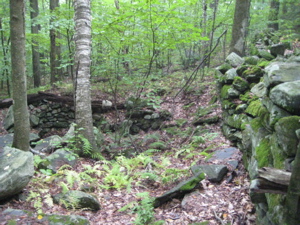 Water was directed into what looks like a stairway into the cellar hole via a sluiceway. The water turned a paddle in this “cellar hole” that was connected to a gearbox that, in turn, provided power up to the factory! The wooden sluiceway must have been in the area where the trail proceeds to an old, washed out earthen dam. The small reservoir that was created by this dam provided the water necessary to power the cheese box factory.

Huh. Who knew? I must admit – it’s not really as cool as the name and description suggests. Shortly after crossing the old dam I climbed up under some large stone ledges. Looking up at the cliff/ledge, I noticed a bronze plaque, honoring Henry Buck, the trail’s namesake. Mr. Buck was vice president of the CFPA from 1928-30. He was a Yale-educated civil engineer who directed the construction of CT’s CCC camps and he also happened to have designed and built the trail I was now halfway complete. 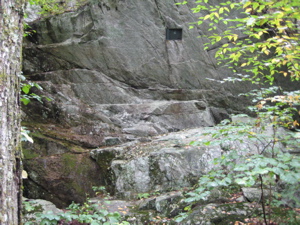 To actually read the plaque requires a bit of balancing artistry. You can’t tell from the pictures, but trust me. It’s not that easy, especially when wet. This leads me to believe that Mr. Buck was not a good civil engineer. Of course it’s unfair to judge the man based on that, but that’s how I am.

The trail continues down a short hill and to something called The Tremendous Cliffs. There are some tricky areas to traverse here, but the views and nice and the terrain is fun. 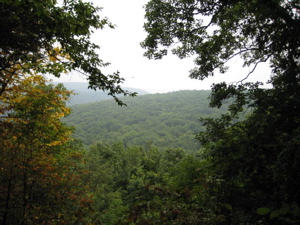 The trail descended and crossed a small area, carved into the side slope, perhaps 30 feet across that is perfectly flat; ah, an old charcoal mound! Most of the hills of Northwest Connecticut were repeatedly clearcut to provide charcoal for the iron industry. Many of the cannons used during the Revolutionary War were manufactured in northwest Connecticut, using charcoal to fuel the furnaces. Later charcoal was used in the brass industry along the Naugatuck River valley. I will note all charcoal burning platforms from now on. 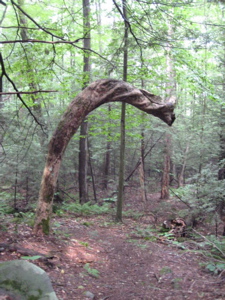 I don’t think I even want to know what sick and twisted thing happened to this poor tree towards the end of the hike.

After that, the trail continued down to the road along which my car was parked. I merely had to walk back down the river for about a third of a mile or so. I passed fly-fishermen casting and recasting to no avail. 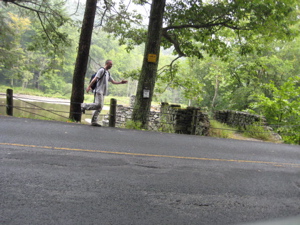 In the meantime, before I would have the pleasure of happening upon such a scene, I had to deal with the unimproved Legion Road. The road is maybe a mile and half and climbs the same hill the Henry Buck Trail climbs. It’s not that bad, but in a low-clearance vehicle there are some tough rocks and ruts to deal with. At one point, while crossing Tanager Brook, the road was sort of washed out and I slid towards oblivion a little bit (“oblivion” being a one–foot deep trench) but I’m sure that gets patched up every so often. 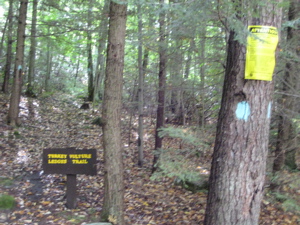 The forest here is beautiful: Mature beeches and birches mixed in with pine and hemlock . The sun had burned off the morning clouds and the dappled white light through the quaking leaves was – while a bit blinding – a pretty cool experience. Once again there is a nice big sign noting the trailhead and a decent area to park. I was cutting things close with getting back home for the 1PM Eagles-Packers kickoff, so I more or less jogged the whole trail.

All .44 miles of it. It ascends gently through the somewhat unremarkable woods with the only memorable feature being a giant glacial boulder, split by eons of freezing and thawing. A couple minutes past the split boulder the trail spilled out on… the Turkey. Vulture. Ledges! (Dunh-dunh-duuunnnnnhh.) I looked left. I looked right. I listened intently. I sniffed the air for carrion. 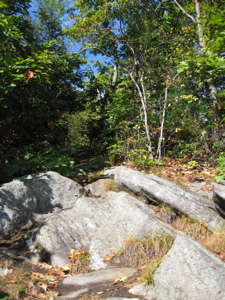 Nothing. Nada. Zippo… However, with the sprawling view of the valley below I could hardly be disappointed. And the fact that a paralyzing fall was somewhat of a possibility here makes it a bit more intriguing. I did not see a single raptor of any variety in the 3 minutes I stood taking in the view. I turned tail and jogged back to my car and made the slightly more harrowing trek back down the hill to pavement. 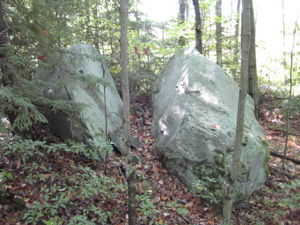 I did see a bald eagle at the end of my earlier hike and I was going home to catch the Eagles lose a football game, so in that sense, I saw the raptors I wanted to see. The American Legion State Forest is really very nice and I’m sure the camping grounds they provide right along the river are great.

This was my first foray into Barkhamsted and it was quite nice. 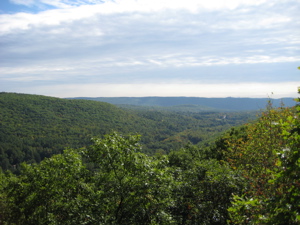