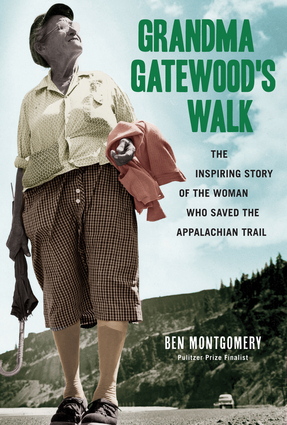 Every Appalachian Trail thru-hiker knows of Emma “Grandma” Gatewood. Most “know” some truth about her and some fiction. This is ridiculous, because there is no need to fictionalize anything about the woman. She’s a legitimate legend, and this book sets out to tell the whole story of her troubling, and amazing life as well as her impossible accomplishments.

Despite being an old school, bible-thumping mother of eleven who suffered years of repeated aggravated assaults at the hands of her husband, Emma was a pioneer in women’s liberation.

Despite being poor and ignorant about the do’s and don’ts of long distance hiking, Emma was a pioneer in the world of ultra-light hiking.

Despite her being a grandmother with very little education or care about “exercise science,” Emma spurred a bit of a walking craze in the United States, which included urging the marines and others to commit to fitness-through-walking.

And despite being in her late sixties and woefully unprepared, Emma thru-hiked the Appalachian Trail in 1955.

Then she went and hiked it again a couple years later. And then again (in sections) as she aged into her seventies. And oh, why not hike the nearly mythical Oregon Trail from Independence, Missouri to Portland, Oregon for good measure. All this in her late 60’s to her mid-70’s. Emma Gatewood is a legend.

This book chronicles her adventures from her first failed (very failed) AT hike in 1954, through to her death and then goes on to recount the effect she’s had on almost every future long-distance hiker. The author, Montgomery, splices in events from her past that shaped her into the tough-minded woman she was.

Her husband Perry beat her severely over the years of their marriage. He was implicated in a murder early in his life and his anger and violence manifested in the broken rib and face of Emma. Her 11 children were witness to many of the beatings and she simply left Perry and struck out on her own. She read about the AT in Sports Illustrated in the early 50’s and decided to give it a go. After all, she liked to walk.

Her first successful attempt started in Georgia on Mt. Oglethorpe (these were pre-Springer days). Back then, the most famous trail in North America was a huge mess. It was poorly marked, terribly cleared, and many of its miles were on roads. It was not the trail those of us who have hiked it know and love.

Grandma didn’t bother with maps. Or really, any preparation other than years of farm labor and her own wits and ability to ask people for help. Her most famous trait was her gear: Keds, jeans, a shirt or two, a rain poncho, a walking stick, and some small provisions. To me (and most everyone), this is pure insanity. She fashioned a hobo sack out of denim and slung it over her shoulder.

And that, my friends, is how she hiked over 2,000 miles over the most rugged terrain east of the Rockies. When it rained, she got wet. She slept under the stars on the ground most nights. When it rained, she tried to find picnic tables and porches. She asked loads of people along the way for rides into towns and to be put up for the night. She NEVER yellow-blazed (hitching rides to skip trail sections), nor did she even blue-blaze (hiking simpler shortcuts). She claimed to have hiked every step of the AT, save for 2 miles or so in Maine.

I applaud this ethic, by the way. In the thru-hiker community there is always debate on what really constitutes a true thru-hike. I can’t imagine anyone thinks yellow-blazing is okay, but many find no issue with blue-blazing or slack-packing (others moving your gear ahead via vehicle for you while you merely hike with a daypack). The AT’s first thru-hiker, Earl Shaffer, once claimed Grandma “cheated.” In a way, he’s right – begging for food and sleeping in strangers’ homes along the way is sort of lame, but what the heck, back then shelters were garbage and few and far between. And she was old, hungry, and cold. But the romance of her sack slung over her shoulder wears a bit thin for me when you realize how much she therefore had to rely on the kindness of others to keep her alive.

The book mines tons of archival news stories about her efforts. As she made her way north – at a good clip, mind you – the media and public became fascinated with her. More and more reporters appeared at road crossings and trail towns and filed stories that were dispatched around the country. If social media existed for her, I can’t imagine what a folk hero she’d have become.

(Actually, she would have hated the massive attention and would have probably run away to hike to the north pole in shorts and flipflops probably.)

The book is getting loads of praise. Honestly, I don’t really see the appeal beyond the long-distance hiking community. Her story is compelling, and the truth of it is often better than any fiction, but I just don’t see it in the same super-positive light as others seem to. If you’re a hiker, or interested in the fascinating life of one of the toughest people to ever grace the earth, I suggest you read Grandma Gatewood’s Walk.

The most-oft asked question of Grandma was simply, “Why?” She had a variety of dismissive and non-commital answers that she employed over and over again. “It sounded like a lark,” or “I like to walk,” or the old standby, “Because it was there.” I have another theory…

Montgomery drops in a clue on page 202 about Grandma that I believe framed her entire life and eccentricities in a way that only a few of us can fully comprehend: Emma was from the White Lodge. This is where she received her boundless energy and indomitable spirit – from the native Blackfoot in the Pacific Northwest. Sure, she spent almost all of her life in Ohio, but so what? Spirits travel anywhere. There is no other way she could have done what she did at her age.

Don’t believe me? Go read page 202. Montgomery casually mentions a few things in passing that astute readers such as myself picked up on. He mentions two things – a paper mill AND a resort lodge called “The Great Northern.” (It would have been too obvious to state that the mill was owned by Josie Packard.)

Boom. Husband Perry had BOB in him and was deeply involved with the Black Lodge. Emma communed with the animals like The Log Lady. She often spoke in riddles like the Man From The Other Place.

I’m telling you, Grandma is a David Lynch character somehow come to life.