CTMQ > Everything Else > Geography > Sandy Point

One of my many new bloggers-in-arms friend I’ve met is Tom from the wonderful 12-Mile Circle Blog which trains its focus on, among other things, quirks of geography. Head on over there for hours of fun… or maybe that’s just me. We struck up a conversation about The Southwick Jog, which led to some curious things about my birthstate’s (Delaware’s) geography… which led me to this. 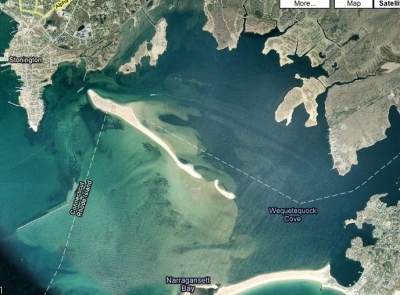 I want to put a Connecticut flag out there.

While checking out Google Maps while looking for things to do in the Stonington area, I noticed that it appears Connecticut is slowly gaining land from Rhode Island. Note that the state line cuts off the northwestern end of that sandbar – something I’m sure wasn’t the case years ago when the lines were agreed upon. TAKE BACK THE SAND! Thanks, wave action!

What’s funny about this is that, as CTMQ readers know, Massachusetts stole Southwick from us and, as you may or may not know, New York stole Fishers Island from us even more recently, in 1879. Fishers Island is only two miles south of the Connecticut coast. 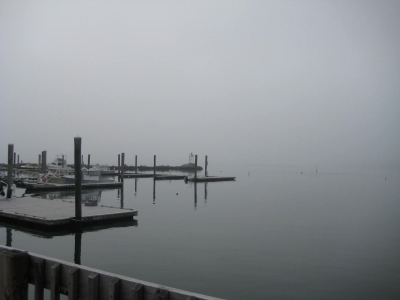 It’s out there, in the fog.

The island was the subject of a border dispute between New York and Connecticut. A 1664 land patent granted to the Duke of York included all islands in Long Island sound, effectively granting the island to New York. However, when the islands former owner became governor of Connecticut in 1657, he had included Fishers Island in Connecticut’s charter. The dispute would not be settled until 1879 when a joint commission decided that the island was part of New York. New York State, Connecticut and Rhode Island meet in the waters east of Fishers Island. (Another geographical fact you didn’t know: There is a CT-RI-NY tri-point out in the Sound.)

Despite being a part of New York, in many ways the island has closer links with Connecticut, 2 miles (3.2 km) to its north, than with the rest of New York, 10 miles (16 km) to the southwest. For example, its ZIP Code is 06390; Connecticut zip codes begin with “06” while all other places in New York State have zip codes starting with “1”. The island is also part of the Roman Catholic Diocese of Norwich, Connecticut. The island is the only point in Suffolk County to which telephone calls placed from the greater New York City area are classified as long distance and not “regional”, even though the island’s area code is the same as that of eastern Long Island (631). 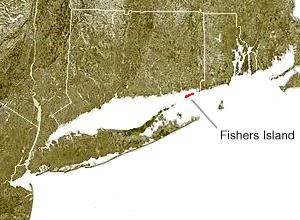 TAKE BACK THE ISLAND! Especially since its inhabited by the super-rich and we’d enjoy their tax dollars.

So I guess the point of this post is that, despite losing two chunks of land in our history, we are slowly gaining some back, grain of sand by grain of sand.