Here we are again! Another TSTL Challenge point! For this one, I employed my kindly and fatherly “Let’s see how close we can get to the goal in the car to save your tender young legs” approach. 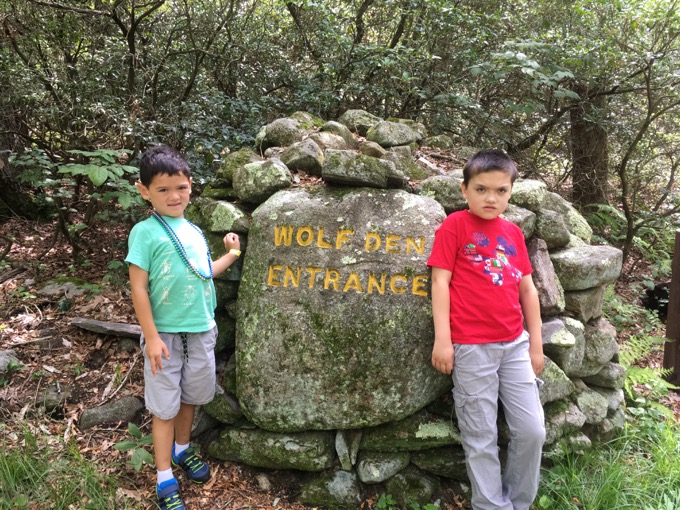 I’ve hiked all over Mashomoquet before, and have even been swimming in the pond with Damian several years ago. I’ll link to the various pages I wrote about this place at the bottom of this page.

Also, I had a full slate of stuff to do in Putnam after this hike, so I really didn’t want to start at the main entrance and spend two hours here. (And, if you know anything about my son Damian, spending two hours hiking with him isn’t usually the best idea.) 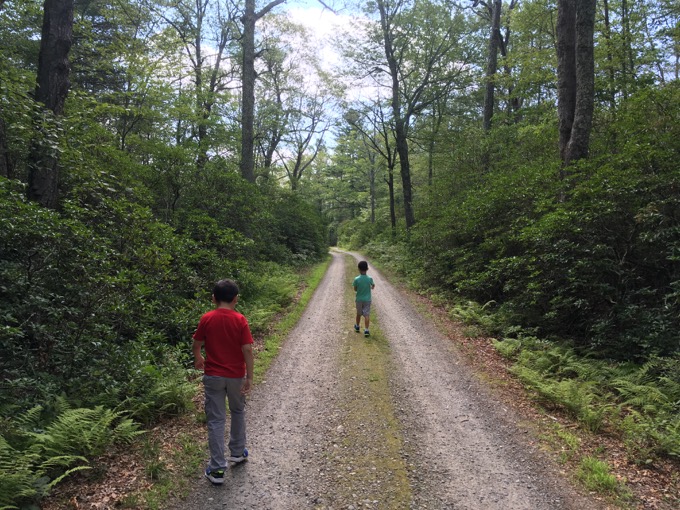 So I found the single-track woods road off of Wolf Den Road known as… Wolf Den Drive. It’s not the best off-roading I’ve done, but it wasn’t the worst either. However, it’s definitely one of those, “Holy crap, I’m in this 100% since I literally can’t turn around until I get all the way to where I want to get.”

And despite everything I just wrote, I could have actually driven in to a picnic area even closer to the Wolf Den we were seeking. Oh well. At least YOU can cheat even more now that you’ve read this.

I parked and the three of us walked down the very nicely cleared road/trail to the aforementioned picnic area. It’s funny that this was so easily drivable, but the road to get here is decidedly not. 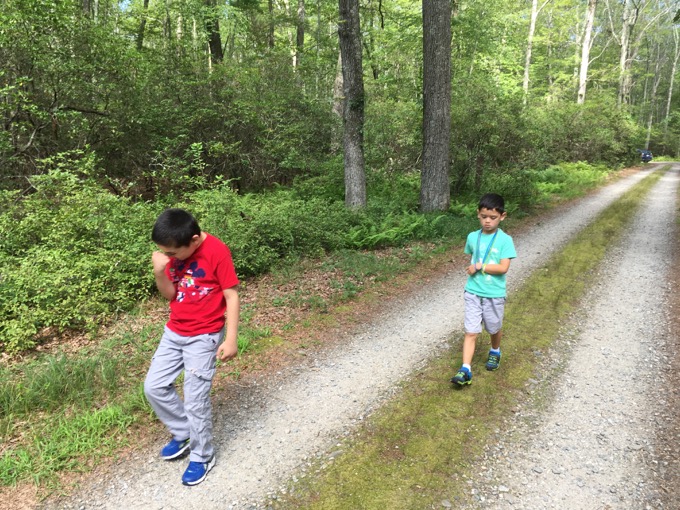 Damian went through his usual progression of self-injurious behavior and opposition to the walk, but we continued to plug along. He usually gets over it in five or ten minutes. (And did.)

We entered the woods through a laurel stand and began descending down into a valley. 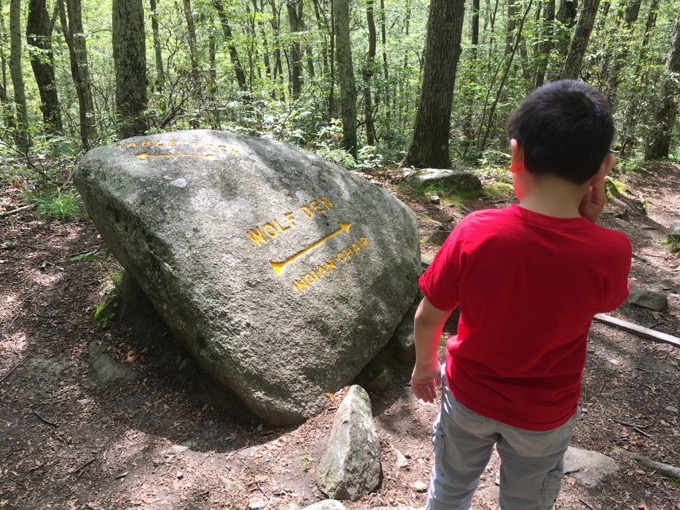 Damian became obsessed with the fact that there were “steps” in the woods. Over and over he had to confirm with me, “Papa. Steps.” 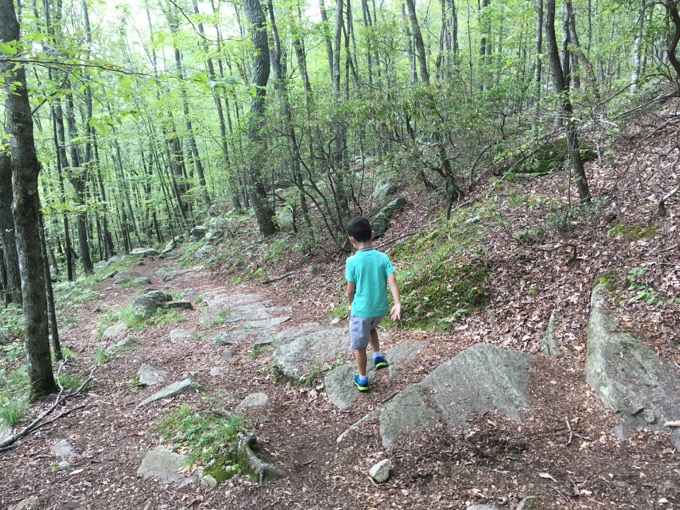 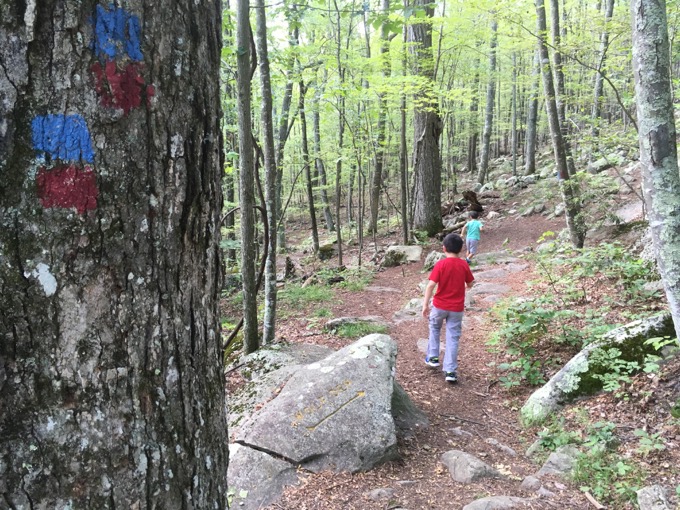 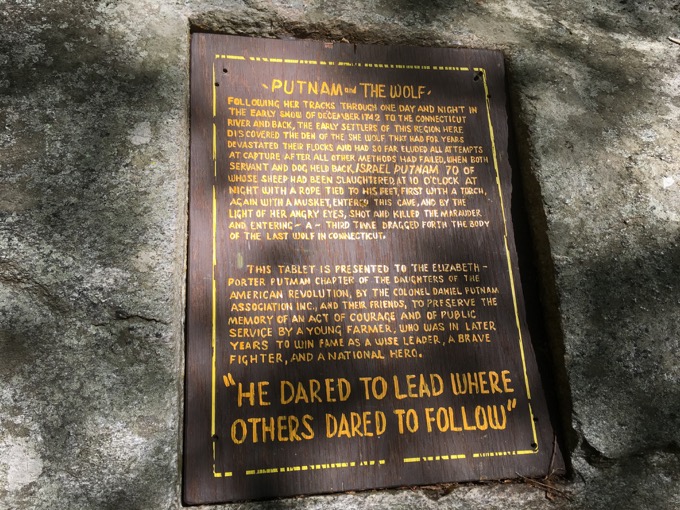 You get the point. (Actually, no you don’t. The child can perseverate like no one you know. It’s maddening if I’m being honest. And I always am.)

And just like that, we’d reached our goal: The Wolf Den. I’ll just borrow some text from my friends at WNPR. 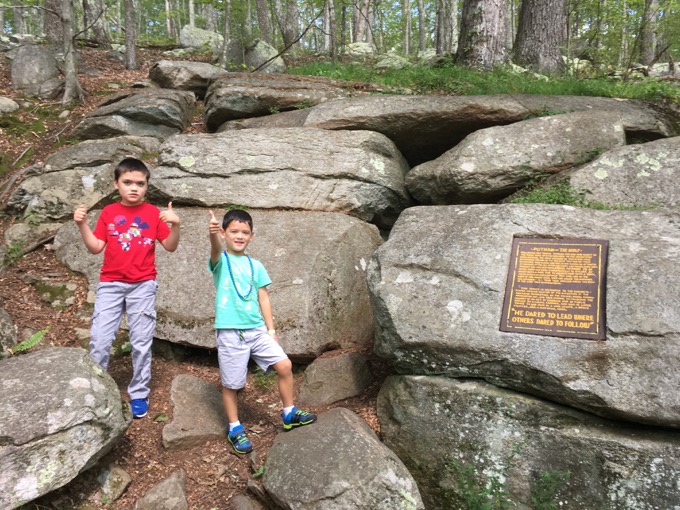 Israel Putnam is a name that stands out in the colonial history of Connecticut as a war hero of the French and Indian War and the American Revolution. Prior to his wartime glory, he earned the nickname “Wolf Putnam” by killing what was believed to be the last wolf in Connecticut when he was a young farmer in the eastern Connecticut town of Pomfret.

The disappearance of an animal from its native habitat is no longer cause for celebration, but life in the mid-1700s was very different than today. To make a go of farming, you were up against many obstacles—the harsh New England winters, rocky soil, and predators destroying your livestock. A wolf was not viewed as a mysterious, beautiful wild animal but a serious threat to your livelihood. 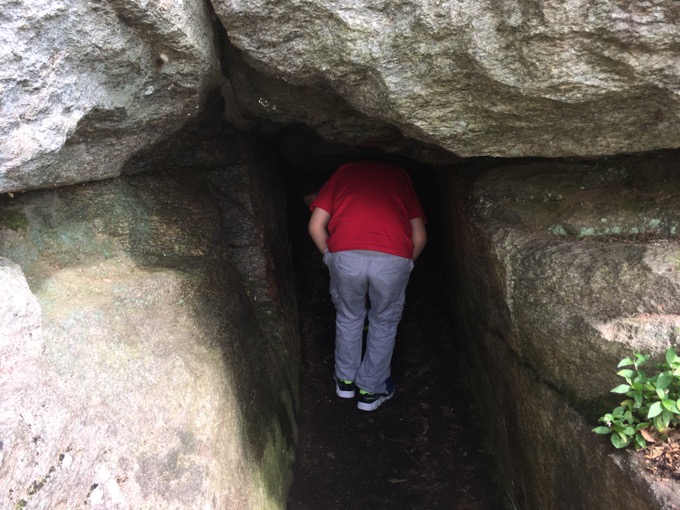 There are many versions of the story of Israel Putnam and the wolf, but the original is found in the book The Life and Heroic Exploits of Israel Putnam, written by General David Humphreys, and first published in Hartford in 1788 while Putnam was still alive.

The story goes that one night in 1742, 70 of Putnam’s sheep and goats were killed by a wolf that had been terrorizing the Pomfret area for years. This was not just any wolf. She was a tricky animal, who despite losing most of the toes on one of her feet in a steel trap, regularly evaded capture by “flying to the western woods,” returning each fall with a new litter of pups. Every year, the hunters were able to destroy the wolf pups, but the mother wolf continued to elude them. 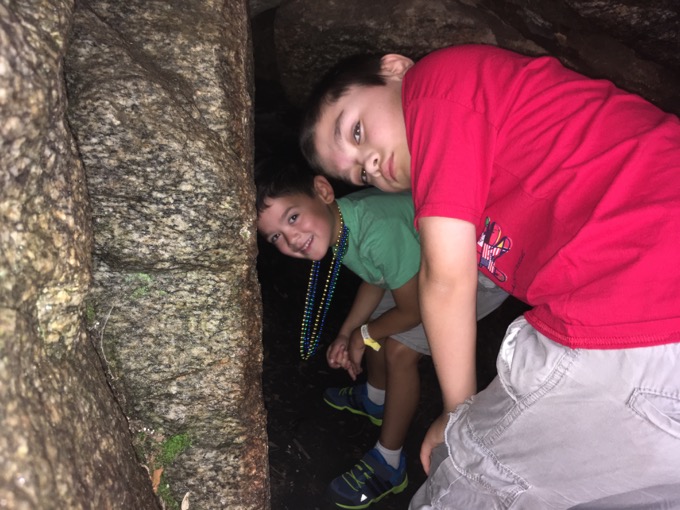 One fall evening, Putnam and his neighbor tracked the wolf through newly-fallen snow all the way to the Connecticut River and back.

Wait a minute. Hold on. That’s over 80 miles. Granted, perhaps they meant a different river. I’m sure that’s the case. I know this story is mostly apocryphal, but at least get your made up facts correct! 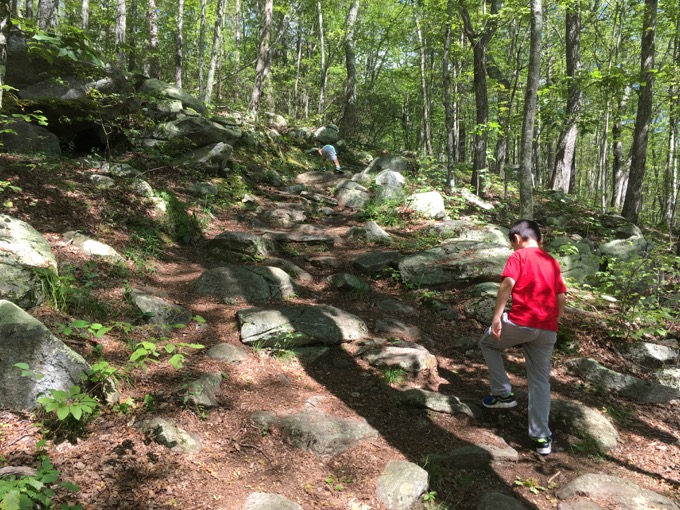 Using a pack of bloodhounds, they drove her into her den about three miles from Putnam’s farm. After all efforts to get the wolf from her den failed, Putnam decided there was no other option but to enter into the den himself. He removed his jacket and waistcoat, lit some strips of birch bark as a torch, tied a rope around his legs, and descended into the cave-like den. According to Humphreys, Putnam made three trips down into the den: the first trip to determine the location of the wolf, the second to shoot and kill her, and the third to bring up her body. 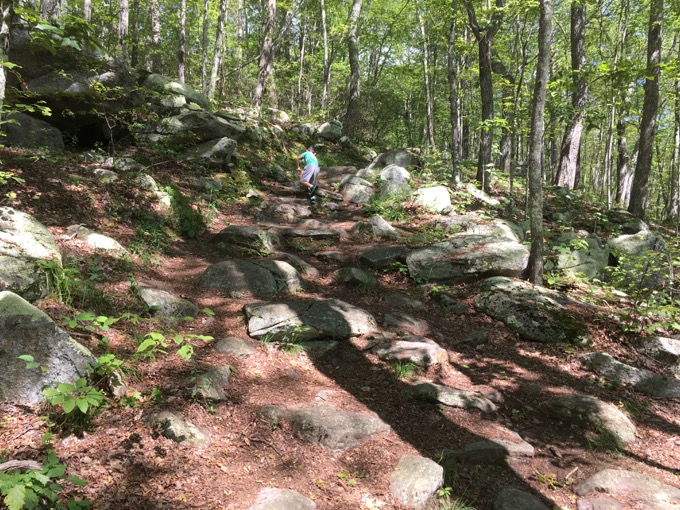 The boys and I hiked back up the hill and the steps that were built into it and back through the picnic area. On our way, young Calvin Wood stalked and hunted the last blueberry in Connecticut.

We had tracked them all the way to the Mississippi River and back and now we had found it. 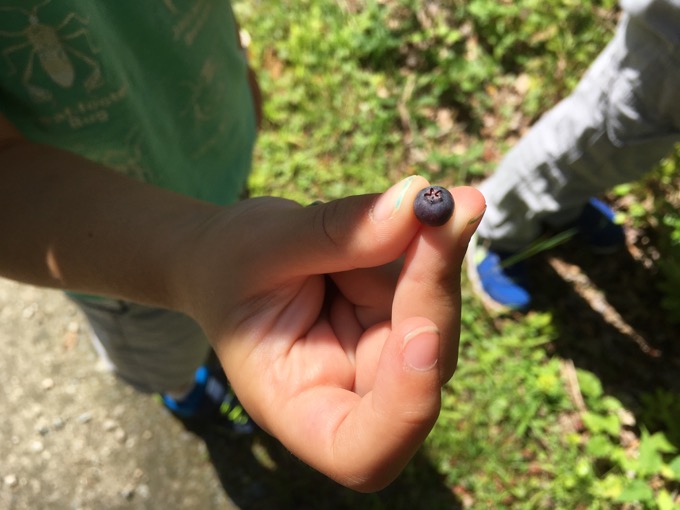 He cornered it and picked it. 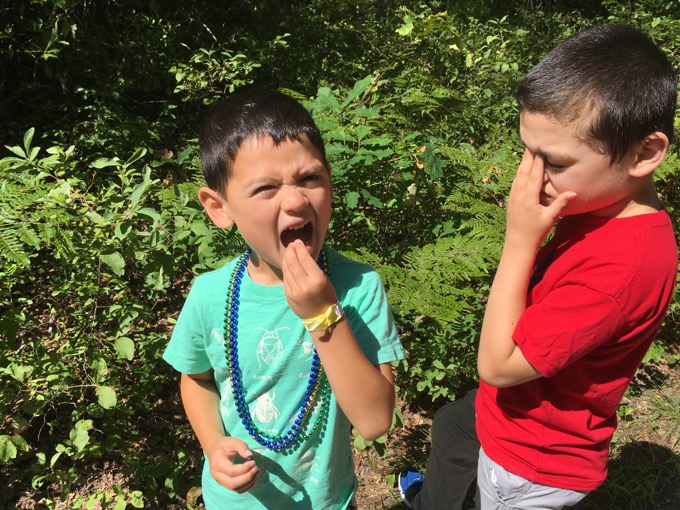 And it was bitter. 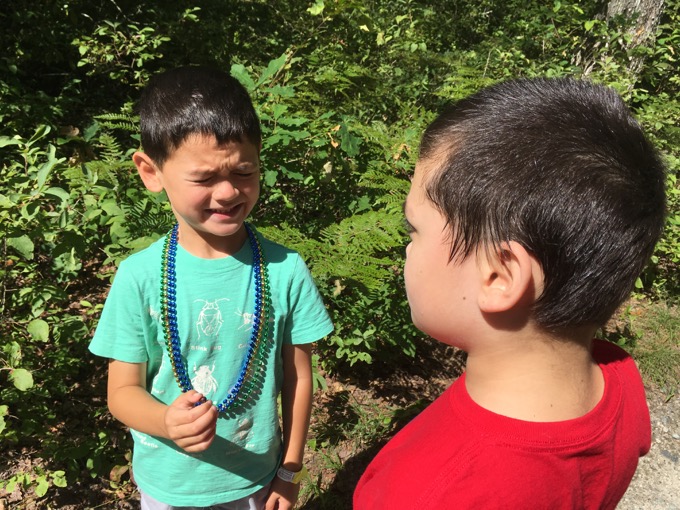