A Museum Not Without Merritt
Stratford (Google Maps Location)
June 2, 2008

2019 update: Since writing this, there have been widening, tree-clearing, and off/on-ramp improvements to the Merritt. It’s still mildly charming and dangerous however.

What is a museum? According to Webster’s (and since Noah Webster was born in my hometown and of course has a museum honoring him, I’m sticking to his namesake dictionary’s definition) – a museum is an institution devoted to the procurement, care, study, and display of objects of lasting interest or value; also : a place where objects are exhibited. 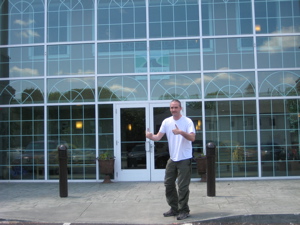 I’ve often waffled on what to include as a museum and what not to include. But the Merritt Parkway Museum made it easy on me – they call themselves a museum and I accept that. Good enough for me. However, the reader may think otherwise… Especially in light of the definition above. 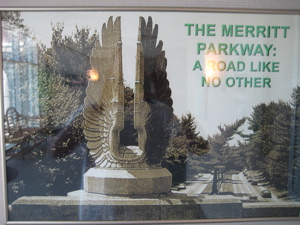 The Merritt Parkway: A Road Like No Other is the overarching theme of this “lobby museum,” as they correctly describe the place. I made it a point to quickly stop here after a visit to my family down in Delaware. This is not a time-consuming museum… Hoang and Damian stayed in the car during my visit.

The Merritt is, simply put, a really, really cool highway. As one of the only roads listed on the National Register of Historic Places, the Merritt Parkway boasts a distinction usually reserved for buildings or battlefields. No trucks are allowed as it’s already hyper-dangerous without them. It twists and turns up and down way-too-steep hills taking drivers to way-too-abrupt exit and on-ramps. And everyone speeds like demons. I love it. I love it, that is, until someone has an accident and since there are pretty much no shoulders… you are pretty much doomed to sit for a long, long time. 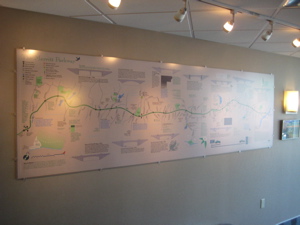 I also don’t love driving it in rain, let alone snow – but the alternative is the horrid I-95, which parallels the Merritt to the west. There are no trees on 95. And 95 isn’t a 37.5 mile scenic roadway. And 95 doesn’t transect some of the richest communities in America either. Communities like New Canaan, Greenwich, and Darien to name a few. (The Merritt is where David Letterman infamously kept getting speeding tickets in the 80’s and early 90’s.)

The Merritt is not for the timid or the weak or the slow or the inattentive. (Once in New York, the Merritt becomes the Hutchinson Parkway which has recently been widened a bit, and which doesn’t have the unique bridgework of the Merritt, but it’s still a fun drive for a while.) At this point you should be asking what the heck does the Merritt Parkway Museum contain anyway? 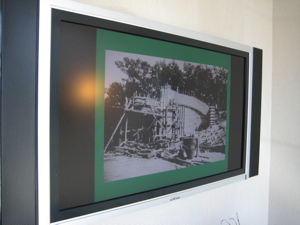 Not much. Basically, there is a large mural of the highway denoting the interesting and historical aspects of the bridges and surroundings. Some highlights:

Construction began in 1934 to alleviate Boston Post Road (Route 1) which had become clogged with development and traffic. (This plagues the same road today, of course.) This worked wonderfully – as did the aesthetic for the Merritt: No billboards, no highway facing businesses and lots of greenery. (And yes, this blesses the same road today!) 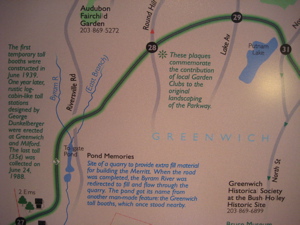 The many bridges on the route are each unique unto themselves, which I personally love. Some have an art deco look to them, denoting speed and sleekness. The Lake Avenue Bridge in Greenwich contains some art deco metalwork designed by Kenneth Lynch, who designed the metal art deco features of none other than the Empire State Building. 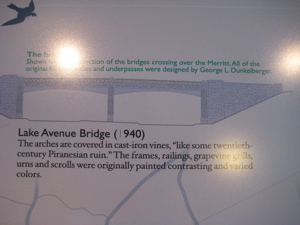 About 70,000 drivers use the Merritt daily, from the New York border in Greenwich to the Sikorsky Bridge in Stratford. 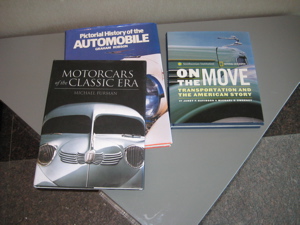 The Comstock Hill Road Bridge contains a series of bas relief faces, telling the story of the Pilgrims. I’m telling you, there are some really neat bridges here that you’ve all zipped under, barely noticing. Take the Merwins Road Bridge – designed by George L. Dunkelberger (as they all were), it has several seven-foot metal panels in the center section, each containing three sections. The center section contains a cobweb inhabited by a spider. The spiders’ location is different on each railing panel. Each end section features a butterfly on a bent stalk. There’s more, but you get the point.

More… like how the Burr Street Bridge is an homage to the construction workers who built the Merritt – in bas relief. 66 of the original 69 bridges remain; one in Norwalk was washed away in the 1955 flood and the other two were demolished to build interchanges (Routes 8 and 25). 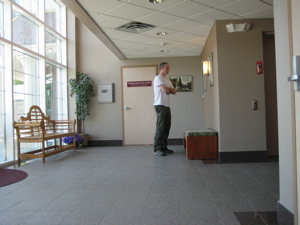 Back when it was built, workers planted 47,000 mountain laurels, 11,000 evergreens, and 3,777 dogwoods. Eleanor Roosevelt used to just drive the Merritt for fun to see the laurels (Connecticut’s state flower) and dogwoods in bloom. In the early 1990’s, a replanting effort was undertaken to get rid of the invasive species and restore the Merritt to its original glory.

I’ve got to get back to the bridges… because they are awesome. Two bridges were built using the “sgraffito” technique. This is a method of decoration in which a surface is scratched through to reveal a different colour or texture underneath. Those colors are faded now, but that’s still neat. (North Avenue and High Road Bridges.) And let’s not forget the Riverbank Road bridge, built at a cost of $28,520, it was called “Pseudo-modern elaborate foolishness.”

There were some books sitting on a table and a few other pictures here and there. I was hoping for more but upon reflection I wonder what more there could have been. It’s a 70 year old highway with some interesting features… And it deservedly has a little museum dedicated to it.