This is nice – an opportunity to “revisit,” in a way, a historic house museum that I was rushed though by Damian on one of his “off” days. (CTMQ Visit here) I had no idea that this old house warranted National Historic status, but I’m glad it does. (As with most of these National list posts, most of the info here on out is lifted from other sources, including this picture.) 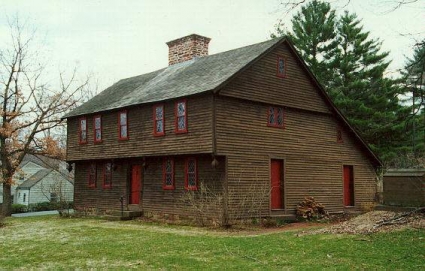 So why is this house special? Built around 1660, apparently by John Stanley, this house is considered to be an almost perfect example of the “added lean-to house” and the New England architectural style. The open setting, tall trees, and picturesque stone wall add greatly to its charm and character. The house is one of the earliest and best preserved of the framed-overhang types, and its ornamental drops are among the finest in the country. The framed front overhang projects 1-1/2 feet beyond the first floor, and the gabled overhang at each end measures 6 inches. The second floor has no overhang. The ornamental drops are carved from the ends of the four second-story posts that project through the overhang.

Even though the Feds said the house was built in 1660 above, the locals feel differently:

Located in the historic village of Farmington, the museum facility is centered on a ca. 1720 National Historical Landmark house, furnished with period antiques to reflect the everyday activities of Colonial life in Connecticut. Surrounding the house are period raised bed gardens, an apple orchard, and heritage stone walls.

A “Dwelling House and six acres of land” was purchased by Ebenezer Steel from Deacon John Stanley on December 31, 1720, the first indication that the historic house at the heart of the museum existed. Records indicate that the building was constructed sometime between 1709 and 1720. In 1722, when Ebenezer Steel died, his oldest child, Mary, inherited the house, described in Steel’s will as “the other house and homestead.” Mary Steel and Thomas Smith, the earliest known inhabitants of the house, were married on January 14, 1725, when she was 20 and he was 25. They became the first of a succession of families who lived in the house. 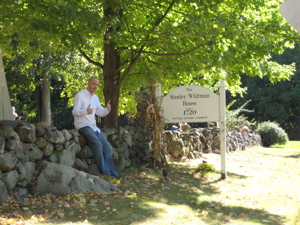 The time period represented in the house ranges from 1720 to 1772, with the successive occupancies of Thomas and Mary Smith (1720-35) and Solomon and Susannah Cole Whitman (1736-72). Both families were economically comfortable and well educated. Both families followed the Puritan religion in the Congregational Way, and all were farmers, but practiced other trades, as well: Thomas Smith was a weaver and Solomon Whitman was an arbitrator, justice of the peace, probate judge, town clerk and shoemaker. The lives of both families are depicted in a tour of the historic house, beginning with the Smiths on the south side of the building, then moving to the Whitmans on the north side.

The Post Medieval-style house is a rare surviving example of early New England architecture, reminiscent of houses the early Colonists had known in England. A center chimney flanked by parlor and hall with two chambers above provided both living and storage space. The Colonists built houses from wood, the plentiful resource in the area, and used post and beam construction for the frame. The second floor extends beyond the first on the front façade, creating an overhang. The original purpose of the overhang is unknown, but it did provide more space in the upper chambers.

The lean-to addition that extends across the width of the back of the house was added some time in the mid 18th-centruy, giving the house its distinctive saltbox shape.

The interior is characteristic of the early central chimney plan, the parlor and hall being located on the sides of the great central chimney. The chimney below the roof is of well-selected, mostly flat fieldstone, laid in clay mixed with straw in the old English fashion. Above the roof the chimney is of red sandstone, sometimes called “brownstone,” laid in small blocks, the wide joints being filled with lime mortar. The large stone fireplace in the hall is original, and is 7 feet wide and more than 3 feet high. The lean-to at the rear of the house is an 18th-century addition, possibly about 1760. It includes the central kitchen portion, a “buttery” room at one end and the traditional “birth and death” room at the other. The fireplace in the lean-to is backed against the original central chimney, although it has a separate flue.

In 1735 the Reverend Samuel Whitman, minister in Farmington from 1706 to 1751, purchased the house from Stanley. In 1935, its owner had the house expertly restored by the late J. Frederick Kelly, an authority on early domestic architecture in Connecticut, and then deeded it to the nonprofit association that now administers it.

My visit to the museum
Stanley-Whitman House