I feel badly for people who live in Danielson. Ever since The Karate Kid, everyone must say the name of the town like “Daniel-san!” And that must be annoying. Almost as annoying as the fact that Danielson isn’t even a real town but is instead the downtown part of Killingly. Actually, it’s a borough of Killingly, one of the very few true boroughs in the state. 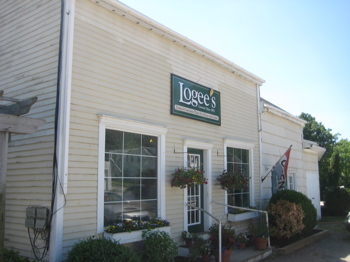 I know, I know, you don’t care. You came here to read about a very old lemon tree. I stopped by Logee’s on my way home from a conference in Boston, not really knowing what to expect beyond a typical garden center with greenhouses. And in a way, that’s all Logee’s is. Except that its not.

It’s old – very old. And it’s also very unique in that many of the plants here are also very old. The greenhouses have dirt floors and a bunch of the trees and shrubs are planted directly into the ground and have been allowed to sort of “grow wild” over the years. The pathways are crazy skinny and if you’re over, say, 5’5″, you’ll have to hunchback it all around the place. 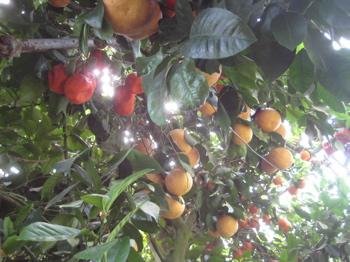 But that’s also what makes it cool. Orchids have melded with fig trees; vines from one plant have creeped up the glass, across the ceiling and down into the bathroom. It’s a pretty crazy place.

I was really only initially interested in the lemon tree, but couldn’t help but become sidetracked for a bit. Once I found the tree, I was tempted to pocket a giant lemon – this tree grows ’em up to FIVE POUNDS – but that wouldn’t have been cool. 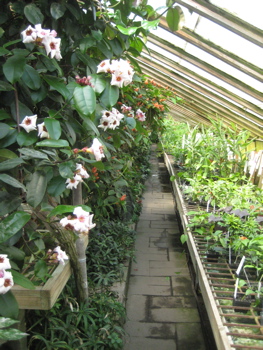 Logee’s Greenhouses was started by William D. Logee in 1892 in Danielson, Connecticut. He started as a cut flower business and soon became interested in tropical and unusual plants. In 1900, he bought a small Ponderosa Lemon tree from a grower in Philadelphia. It was known as the “American Wonder Lemon” due to the size of the fruit, which could get as large as 5 pounds. The tree was a must for the Logee collection. It was shipped via train, then picked up by horse and buggy and directly planted into the ground in the original greenhouse. The same tree in the same greenhouse (appropriately called the Lemon Tree House) still stands today, and is reliably producing 5-pound lemons every year. Hundreds of thousands of propagations have been harvested from this original tree. 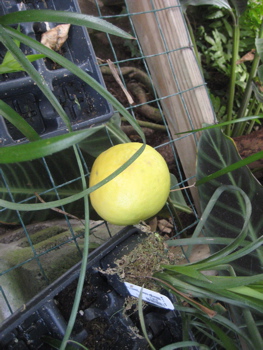 William’s eldest son, Ernest Logee, became interested in horticulture and turned his attention to growing tropical plants in containers, making these plants accessible to any one living anywhere. His interests centered around the unusual form of Begonias. He hybridized begonias for Logee’s and was one of the original founders of the American Begonia Society, creating the Buxton Branch in Massachusetts. He was drawn to Semperflorens as well as Rex begonias. He hybridized his own begonia and named them the Mother Goose Series. Examples of his hybridized begonias are Lucy Locket, Pied Piper, Goldie Locks, Mother Goose and Pistachio. Periodically, we bring his Begonias back into production. Under the direction of Ernest Logee, Logee’s at one time grew over 400 varieties of begonias. Ernest Logee died as a young man when he fell from a tree he was pruning. When his younger sister, Joy Logee went to his funeral, she met her future husband Ernest Martin who was also a horticulturist and member of the Begonia Society.

After William Logee’s passing in 1952… 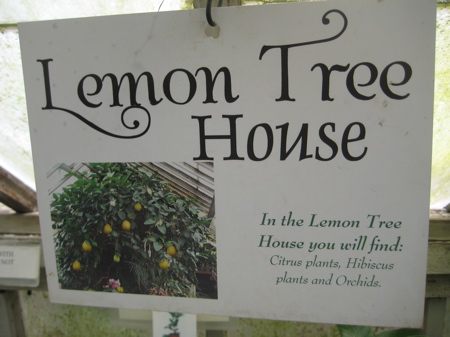 Byron Martin remained at Logee’s. In his early twenties he decided to turn Logee’s Greenhouses into a place where not only customers could visit, but a place that could provide unusual tropical flowering and fragrant plants. The one criteria that was important to Byron was that whatever plant he brought into the Logee’s collection had to perform well in a pot. Today, Byron is instrumental in finding new plant materials.

Byron decided if he were going to dedicate his life to the family business he needed to bring the place into some semblance of order. One afternoon, he took his chain saw into the retail greenhouse, named the Big House, and down everything that was unruly, vining into walkways, and overgrown; pruning at its best!

As the business grew, Byron built more greenhouses and built two propagation houses. The energy crisis hit in the 70’s and heating old glass greenhouses took its toll. Byron decided to heat the entire range of greenhouses with cord wood one season. After harvesting his own wood and burning over 50 cords, he opted to build a passive solar greenhouse to capture nature’s energy as well as a herb pit, which was built half-way underground… 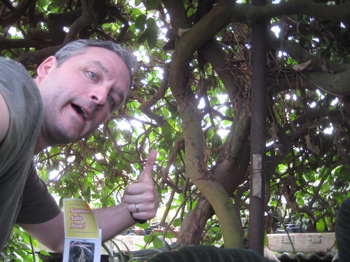 Well, there you have it. Grab a couple old friends, get cozy on your bed, watch The Karate Kid, and have yourselves a Lemon Party!