At the time of my visit, Glebe House (it’s just Glebe House like Eurythmics) was a no photos museum. Therefore, my photos are horrible and nonsensical because they were all furtive. But the story here is not the bones or furniture of the house, but rather the actions that took place in it 240 years ago. 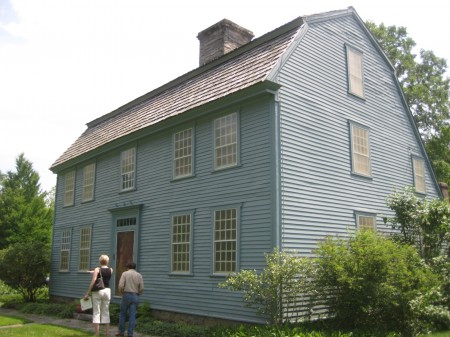 I was going to take this opportunity to write a minor rant about the lack of coordination between like-minded historical preservation organizations – something which has driven me mad over the years of CTMQ. The most glaring example was always found in Lebanon and their 6 museums run by 4 different entities. Then a miracle happened out east, and the Lebanon museums got pretty much on the same page and one can feasibly spend a weekend afternoon there and visit every single little museum, boom boom boom boom. Boom boom.

Here in Woodbury, right around the corner from Rob Zombie’s house, another wacky ET Progressive road sign and the incomparable Dottie’s Diner, there sit two old houses that are now museums: The Hurd House operated by the town’s historical society and the Glebe House operated by something called The Seabury Society for the Preservation of the Glebe House. (Yes friends, we’ve much to learn on this page.) I used to cite this situation, as you can literally throw a rock from the Glebe through a window at the Hurd, as yet another bit of provincial Connecticutness. One was open when the other was not and vice versa. 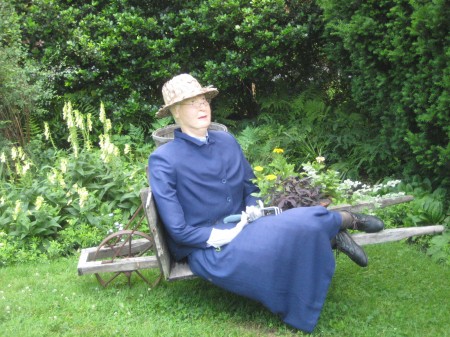 But as I write this page, I see that while the Glebe is open way more than the Hurd, if you find yourself in Woodbury on a Sunday during June through October between 2 and 4 PM, you can actually visit both at the same time. Huzzah.

I, however, visited on a Saturday in June, so it was one historic house museum and done for me. (Which was a good thing, as I was short on time anyway… and really, any excuse to get back to Route 6 in Woodbury for cinnamon doughnuts from Dottie’s Diner is fine by me.)

I first enjoyed the garden. This is not just any old garden, no, this is a Connecticut Historical Garden! It’s not huge, but it is very nice. You can read more about the garden here. In short, from the Glebe House website:

In 1926, the famed English horticultural designer and writer Gertrude Jekyll (pronounced jeek uhl) was commissioned to plan an “old fashioned” garden to enhance the newly created museum. Jekyll had a profound influence on modern garden design and is widely considered the greatest gardener of the 20th century. 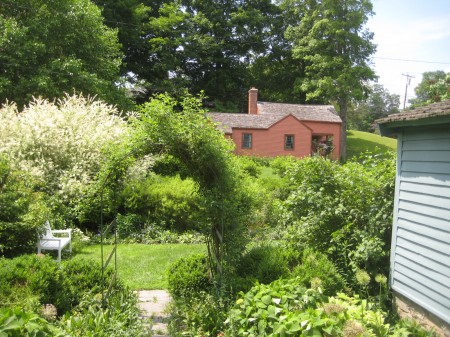 But here’s the thing about the Glebe: there actually isn’t too much cliché stuff. First and foremost, it’s called the Glebe House and Glebe isn’t a person’s name, it’s a thing. A fairly interesting thing with historic import.

No, it’s not the fact that the 1750 house is an unusual combination of gambrel and saltbox roof styes… it’s a religious thing. An Episcopalian thing.

And to Episcopalians, it’s a very important thing. (If you are unfamiliar with the vagaries of Episcopalians and Anglicans within the umbrella of Protestant Christianity of the English sort, then well, you’re going to hell and there’s nothing I can do about it.) 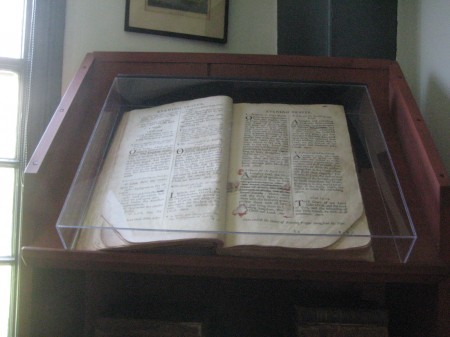 I am. Back in the day, the English Christians weren’t hip to the whole Popey thing so they split and formed the Anglican Church. All sorts of offshoots followed, of course, because the infallible word of god is, strangely, quite open to interpretation. Anyway, the US was about to go through it’s revolution and the Anglican doctrine had some stuff it basically praying to the English royalty.

The Episcopals were the Anglicans in America. And Scotland. And other random places around the world like Taiwan and Colombia and Haiti, but whatever.

This wasn’t much of an issue pre-Revolution. In 1771 Woodbury’s first Episcopal priest, John Rutgers Marshall of New York City, arrived with his wife Sarah. By the end of the Revolutionary War, John Marshall and his family had endured the oppression suffered by many New England Anglicans who were often presumed to be loyal to the king, whether or not they were.

But then we gained our independence from England and the whole Anglican/Episcopalian “I love England” thing didn’t work so well anymore, at least in New England. (In Canada, then – as today – they still love their English overlords and identify with the Anglican church.)

Oh yeah, the name. A glebe is an area of land within an ecclesiastical parish used to support a parish priest. The plural of it is apparently also glebe. This house was built around 1750 and was the rectory for St. Paul’s Church in town. 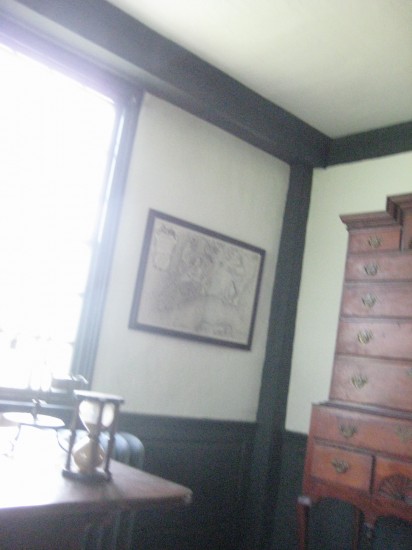 This whole glebe thing started back in Medieval times and… Put it this way – an Anglican priest lived here in Colonial times and the house and land was a glebe back then.

So now we have why it’s called the Glebe House and we have a little religious history. (By the way, my Baptist/Fundy family members don’t think of Episcopalians in any better light than those idol worshipping Catholics. I don’t know why, nor do I care.)

With the American revolution, our fair Episcopalians, a word I’m tired of typing, had a problem. They couldn’t do whatever Episcopalians do to become “official” anymore because it involved loyalty to the crown. Uh-oh. 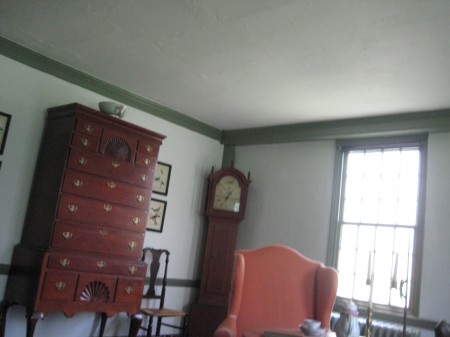 So only weeks after our independence was secure, a group of Episcopalians met secretly here, at the Glebe House, to make a momentous decision; to take part in the building of a new nation while upholding their religious heritage. Although it doesn’t sound all that important today, this was a really, really big deal.

The group elected the Reverend Dr. Samuel Seabury as the first Bishop in the new world, a decision that assumed both the separation of church and state and religious tolerance in the new nation. Right here! In the Glebe House in Woodbury, Connecticut! Here’s how it all went down. 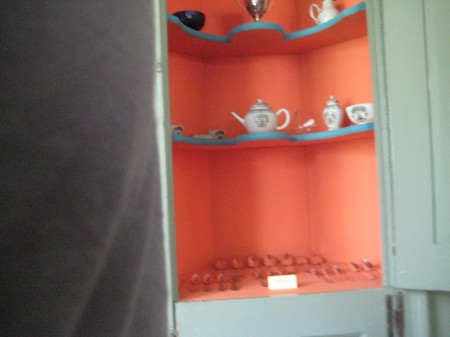 So, remember the Rev. John Rutgers Marshall guy I mentioned earlier? He lived in Glebe House from 1771 until 1785, through the whole American revolution thing. On Mar. 25, 1783, ten clergy met there and selected Samuel Seabury and Jeremiah Leaming as candidates for Bishop of Connecticut.

Seabury accepted the election and sailed for England to be consecrated. He arrived in England on July 7, 1783, and spent over a year trying to get consecrated by English bishops. Come on, Seabury, what were you thinking dude? 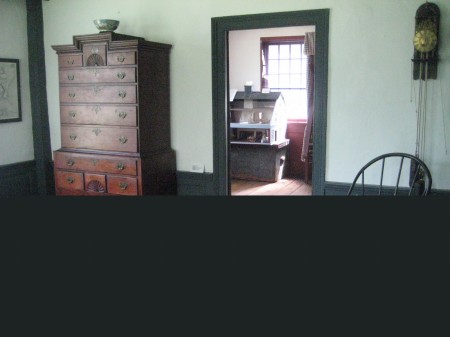 For a number of reasons, including the need to take the oath of allegiance to the King of England, no bishops would consecrate Seabury. So he did what any self-respecting patriotic Episcopal aspiring bishop would do: He went to Scotland, where he was consecrated at Aberdeen on Nov. 14, 1784, at the chapel in the home of John Skinner, Bishop Coadjutor of Aberdeen. This is why you see a Cross of St. Andrew on the Episcopal Church flag. 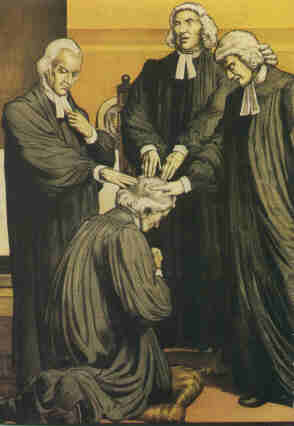 This painting is Seabury getting, ahem, consecrated. Or something. I got it from this page about Seabury.

So now besides my birthday on November 14, you can also celebrate the BESTOWAL OF THE AMERICAN EPISCOPATE with the Epicopalian Church of America. After wishing me a happy birthday, here’s the prayer your are to say to pay your respects to Seabury:

Eternal God, who didst bless thy servant Samuel Seabury with the gift of perseverance to renew the Anglican inheritance in North America; Grant that, joined together in unity with our bishops and nourished by thy holy Sacraments, we may proclaim the Gospel of redemption with apostolic zeal; through Jesus Christ, who liveth and reigneth with thee and the Holy Spirit, one God, for ever and ever. Amen. 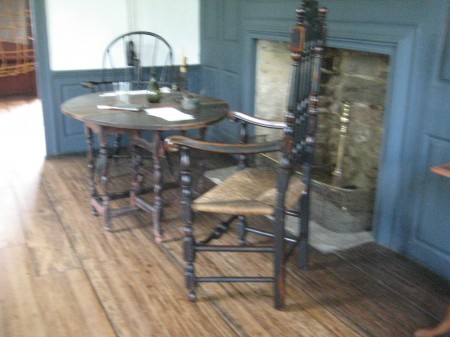 After the Marshalls had moved from the Glebe House, Gideon B. Botsford, a silversmith, lived in the house. Botsford lived and worked at the Glebe House with his wife and family of eight children through the mid-19th century. 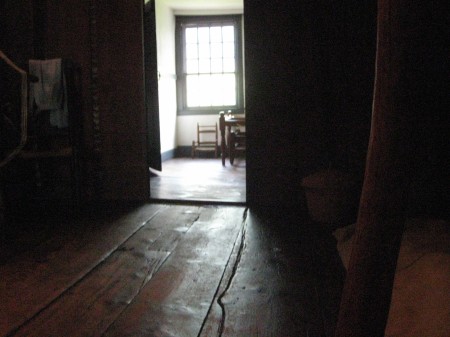 As plans were discussed to tear down the house, it was saved by the Seabury Society for the Preservation of the Glebe House, which repaired the building, began collecting furniture, and raised funds to ensure continued operations as a museum.

The Glebe House was restored in 1923 under the direction of William Henry Kent, pioneer of early American decorative arts and the Metropolitan Museum of Art, New York. One of the early historic house museums in the country, The Glebe House opened its doors to the public in 1925. 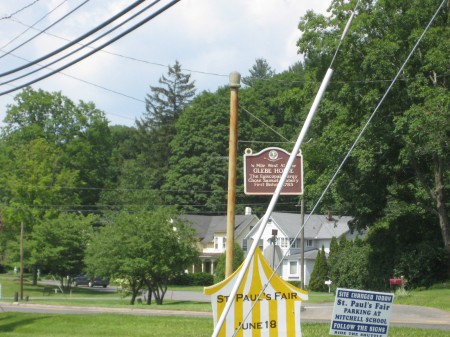 There’s a bunch of old furniture and fine china and fireplaces and wide floor boards and many-paned windows and, yes, even the “sleep tight” bed thing.

My tour guide was excellent and knowledgeable and did a good job parsing fact from legend – something I really appreciate. A tour of the Glebe House museum is cool because you learn about the PEOPLE that lived and visited here, not just about the old kitchen implements. 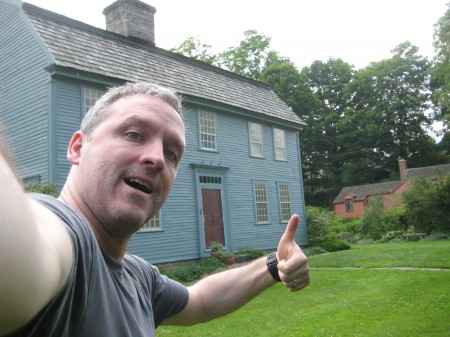