Too often, I feel the need to explain myself as to why I lump certain places into my liberal definition of what constitutes a museum. I fully realize that many places I categorize as such are not museums in anything but the broadest sense. I’m fine with that. 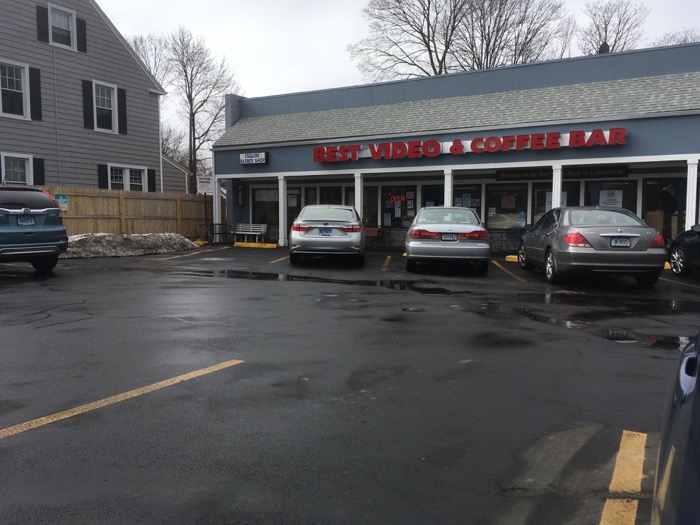 But in the exceptional case of Best Video Film & Cultural Center, I won’t tolerate any dissent. I’d argue, successfully, that simply by having the word “Video” in its name classifies it as a museum. Video?! My kids don’t even know what that is. (Actually – and interestingly – we still use the term “video” when recording snippets on our iPhones. And as a result, our six-year-old actually does say, “can I see the video?” It took a while for “Xerox” as a verb to exit the lexicon, so I’ll give “video” some time to do the same.)

BVFCC uses the word “video” a lot on their website, but I wonder… do they mean DVD? Or do they actually still rent out videos? You’d think I’d know, having visited. But I don’t. 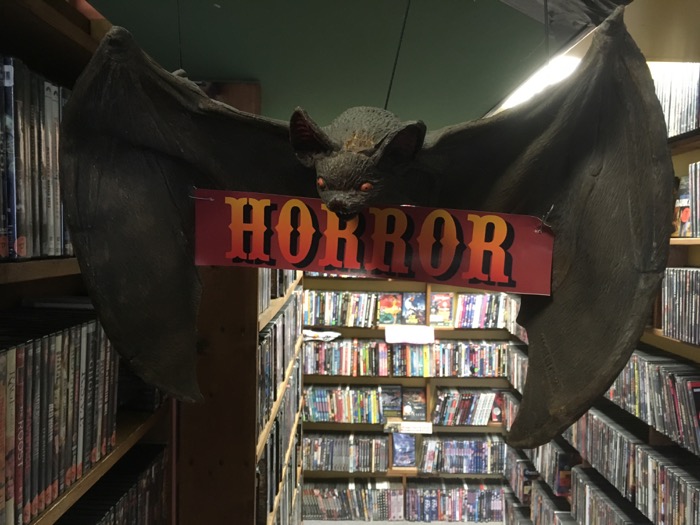 Anyway, this place is museumish inside; it’s not just the name that brought me and Damian here one February afternoon.

Okay. So that appears to answer that. No actual video. Maybe? (Note: I have no issue with this. Many of you know that this very website began as “CT MuseumQuest” before I changed it to CTMQ. BVFCC just hasn’t made the official move to be BVFCC… yet.) CTMQ is not an official non-profit entity, because I haven’t the money, time, or wherewithal to do such a legal maneuver. But maybe BVFCC should? 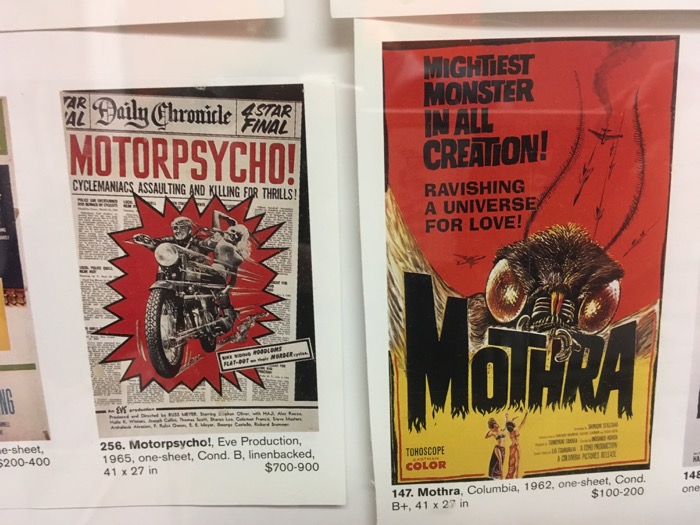 On Nov. 1, 2015, after 30 years in business, owner Hank Paper sold the assets of the store to the recently formed nonprofit Best Video Film & Cultural Center.

Oh. Cool. I had no idea. They now operate as a nonprofit, membership-based video archive. Not store. Archive. 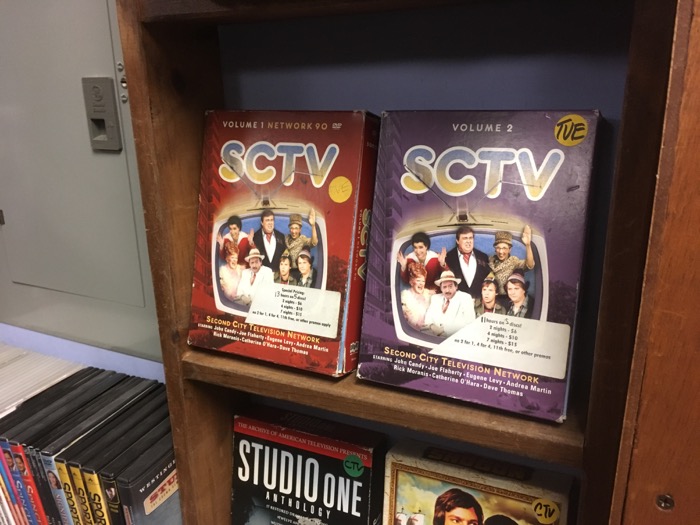 BVFCC intends to maintain the exceptional and deep archive of movies created by Hank Paper as a resource for the local community of academics, educators and film aficionados. The programming of film and music events in the Performance Space will be continued and expanded. As well, BVFCC will continue to operate the cafe—serving great coffee, wine and beer, and pastries from Bread & Chocolate—as an adjunct to event programming and a vibrant meeting place for members of the local community. In addition, BVFCC plans to carve out an educational mission by partnering with local teachers to develop a curriculum based on the power of movies as a communication medium.

Heady stuff. But why is this place special? 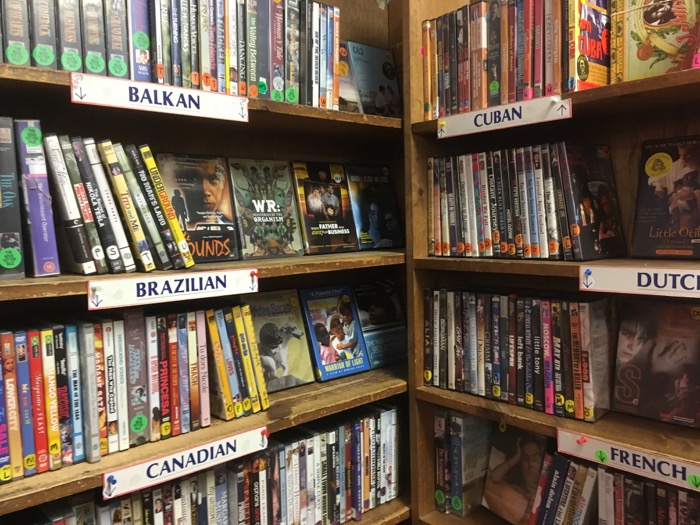 For all your Balkan movie needs…

To answer that, we need to go way back to the days of VCRs. Back when there were dozens of video rental stores in every town. BVFCC was always different. Hank Paper, who has a name I rather love – the only name better would be Hank Video – taught film and even wrote some screenplays. He wanted to own a store that catered to film buffs. Sure, he had the major releases available, but he made an effort to seek out foreign, gay, and cult movies as well. Over time, he amassed the massive library of movies no one else had. His store became a destination.

And not just locally. Paper was a pioneer in the mail-order rental business. People from all over the country would call him up and be able to rent movies you and I have never heard of through the mail. Yeah, Netflix built quite a business with this model, but that was later, with DVD’s. Paper did it with VHS tapes. At one point in the mid-90’s. The New York Times claimed he had the largest collection of VHS movies in the world. 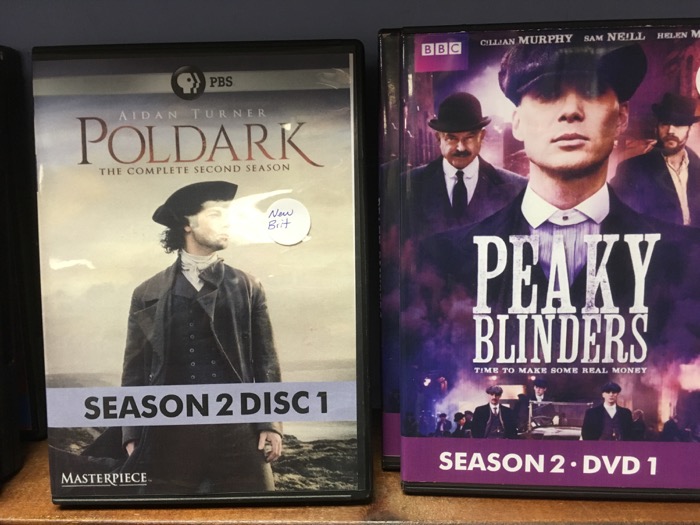 POLDARK! (My wife’s favorite show every in the history of television… Okay, maybe it’s the the guy she likes.)

Paper was also ahead of the curve and welcoming to the DVD. (I learned just now DVD stands for “digital versatile disc.”) He began buying and renting them pretty much the month they became commercially available. And today, as we now know, his store is all DVDs… OR IS IT? A quick check of BVFCC’s online rental database still lists thousands of VHS tapes for rental.

And there you have it friends: Best Video Film & Cultural Center is a dang museum whether you want to admit it or not.

And don’t forget the “cultural center” aspect of the place. There’s a café with a full liquor license (I saw some rather high-end national and good local beers on tap), serving baked treats. They feature concerts and speakers and all sorts of events for all ages. It’s a gathering place. Amongst walls of DVDs. 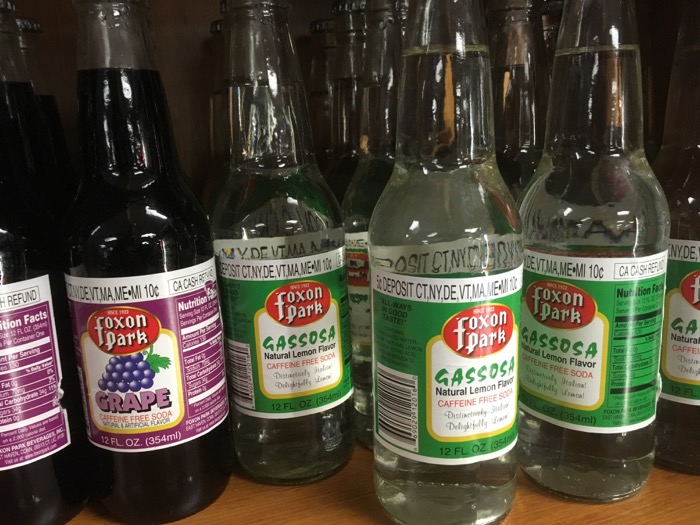 I hear you. I hear you asking, “But wait. I have Netflix and Amazon Prime and Hulu and HBOGO,” why would I be a member of this place? Said Connecticut Magazine in 2017

Even if you take away the concerts, the film series, the lectures and the other perks, and the breadth of selection is your sole criteria, Best Video blows Netflix out of the water. Netflix has about 5,000 films and 1,600 shows in its U.S. digital catalog. Best Video Film and Cultural Center has more than 30,000 titles, according to Hoffman. For $10 a month, you can take out one movie at a time for four days, with no late fees, and attend one free show a month. 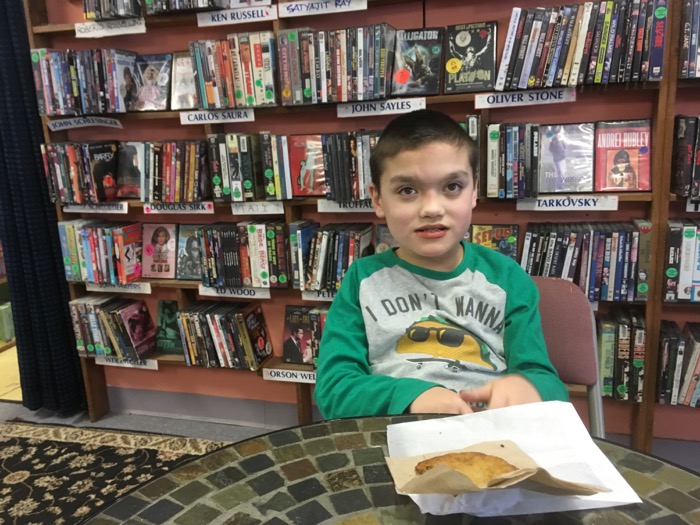 I hope this place stays in business non-profit archive forever. I really enjoyed my visit. Damian enjoyed his giant cookie. If I lived nearer (and if I actually watched movies, which now would be a good time to tell you that I hardly ever do,) I’d totally be a member. Streaming services be darned. 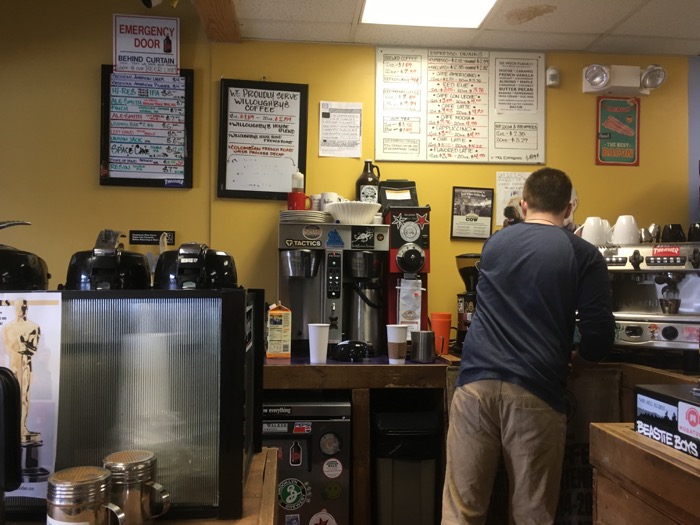