As you may know if you are actually reading this sentence, New Haven is a trove for National Historic Landmark buildings. You can chalk up the bulk of them Yale of course, but probably also to a diligent preservation society that nominated these places. When I walk around campus, I see a ton of beautiful buildings that probably contain a ton of interesting history and stories. 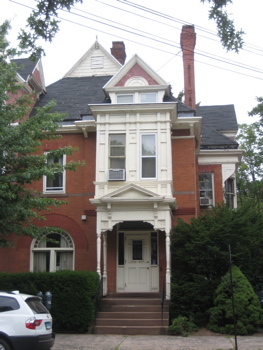 Like, perhaps, the Russell Henry Chittendon House on Trumbull Street near the intersection with Hillhouse. This part of New Haven is simply one of the most beautiful blocks of old homes in – dare I say it – the world. It really is; although the Chittendon house really isn’t all that exciting. (Especially my picture of it.)

The coolest thing about this place is how interconnected it is from some other NHL’s I saw on the same sultry August 2011 day. I also like how way more of these NHL things have to do with scientists than I ever knew. Even though one of the first NHLs I checked out was the scientist Edward Morley House in my hometown of West Hartford. But down here in New Haven, the web is complex.

Let’s call him the “Grandfather of Nutrition.” 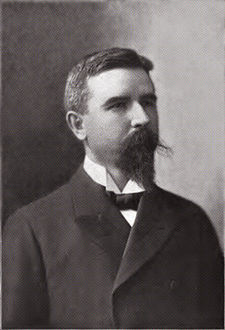 He was the author of Digestive Proteolysis and Physiological Economy in Nutrition (New York, 1905). During World War I, Professor Chittenden was a member of the Advisory Committee on Food Utilization and also a member of the Executive Committee of the National Research Council. He is often called the “father of American biochemistry.”

There is much more about him in the great NHL pdf linked at the bottom. But what about his house? Today, it’s 2/3 law firm and 1/3 rental loft to quote the NHL survey, “contains nothing of architectural importance.” The irregularly shaped three story house with Queen Anne elements was built in 1887 of brick, frame and shingling with gabled roof sections, gabled dormers, interior chimneys with corbeled caps, a square corner tower and a round-arched first-floor window.

I had to look it up and Queen Anne architecture, especially its American cousin, because it really isn’t my cup of tea.